Did I go over the top in the last posting? I did, didn’t I?

I do this sometimes, have you noticed that? Probably why I’m called “Burningbird” rather than “Miss Dove” or “Miss Seagull” or “Cute Little Wren”.

There’s a whole lot of difference between stealing a sign — though this is wrong and not to be condoned — and other crimes one can do. Kick self and tell self “Get some friggen perspective, Bird, or we’ll yank away your ‘I’m holier than thou’ membership card. And make you eat it.”

I have a confession to make. When I was a young teenager, about 14 if I remember correctly, I was out with a group of friends in the wee hours of the morning when we noticed a police car parked in front of a home.

To make a long story short, we stole the blue plastic light cover from one of the lights on top of the car.

So much for my high moral ground

(…she says as she slinks away, hanging her head in shame…)

I know it seems at times as if Jonathon and I have become weblogging’s first tag team. I can’t help it — he finds these interesting things and makes these extremely open observations, and my hands go to the keyboard and I feel compelled to add my own observations to his. I have no control over this process.

Case in point: Today Jonathon discusses a weblog posting he found where a person, Michael Barrish, describes his initial reaction to critical comments:

1. Attack the accuser
2. Minimize the wrong
3. Defend your character

What is the story is that the Barrish didn’t steal the sign because he didn’t want to get caught, not because stealing was wrong.

My philosophy is, I’ll steal signs with my girlfriend but I won’t get caught.

And when he received emails from people saying that stealing is wrong, he tried to justify his actions. However, he faced his own moment of truth:

It’s worth noting that I’ve never been one for the rule of law. Fact is, I respect the law only in the sense that I can be punished for breaking it. The only laws that matter to me—and these matter quite a bit—are the ones I make for myself.

One such law or rule (this may sound strange in the present context) is that stealing is wrong, particularly when one steals for what Jay Perkins calls ‘unnecessary and idiotic reasons.’ And it doesn’t matter that one’s accuser is a righteous jerk, or that little harm comes from the theft, or that one is fundamentally moral. It’s still wrong.

Of course I’m not just speaking about duck signs here, nor only about myself. The same self-serving logic used to justify petty theft is used to justify the destruction of the planet. People do what they want, then find reasons to justify it.

Bullshit. This is absolute and total bullshit.

Yes, some people will do selfish acts and then seek to justify their actions. However, most people, and I count myself in this group, making me a “goddamn paragon of rightousness”, follow our moral codes without any equivocation.

What Barrish failed to realize is that by saying this problem is a global problem, he’s absolving himself of any responsibility for his action and his reaction to the criticism he received.

“People do what they want, then find reasons to justify it.”

Yes, I am not always law abiding. I walk against a red light when no car is around. (In Boston, the cops are suspicious of you if you don’t.) And I have been known to exceed the speed limit. And I’ll fib if someone asks me if I like their new dress and I think it’s the worst piece of crap.

I don’t break things, except by accident. I have found things and returned them, intact, to their owners. I point out billing errors even if it benefits the store. I’m kind to small children, pets, and don’t throw garbage out the window. I conserve electricity, I bought a small car with good gas mileage, I recycle.

I respect and value my friends, including my weblogging friends.

“People do what they want, then find reasons to justify it.”

Time to tie this one back to an earlier topic: This might surprise you all when I say this, but there is no “justification” for the suicide bombings or for the terrorist attacks on September 11th, 2001. My seeking to understand the reasons behind these acts is NOT the same as seeking justification.

Self-righteous paragons of the world, stand up and be counted.

If you’ve been reading my weblog for a bit, then you know that every once in a while I post photos from my front window. Well, I hadn’t done this recently, so I thought I would update you with new views from this last week. 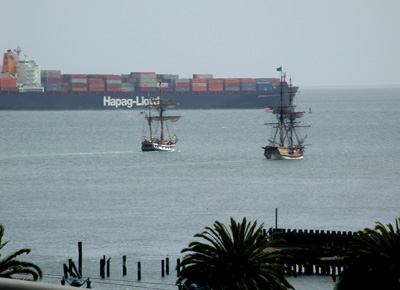 There are two multi-mast sailing ships in the area, and I lucked out and was able to capture a photo of both of them when they were out on some kind of maneuver. I don’t think there’s anything more beautiful than an old sailing ship. The very look of them conjures up the mystery of the Far East (and those of you reading this from the Far East probably got a laugh from that one) — new lands, new people, unending ocean vistas, and adventure. Especially adventure.

One great thing about living on the Bay is that you can see some really lovely weather. Especially when a storm rolls in. We in the South Beach area call ourselves the sunniest part of San Francisco, because we’re the last section of the city that gets covered in fog when it rolls in. 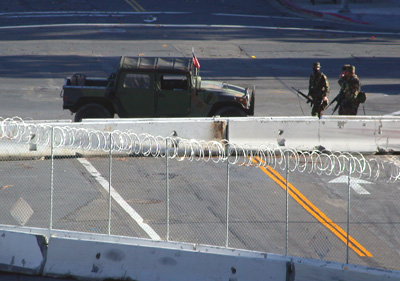 Last week we had a little excitement when some guy climbed over the security barrier around the Bay Bridge. Two National Guardsmen walked over to check him out, but he was only some kind of photographer or tourist who wanted to take a photo of the Bay Bridge, the security barriers, and the soldiers. The Guardsmen here are getting to used to this and usually allow folks to take their photos. They know they’re here for the long haul and they have to get along with the “natives”. 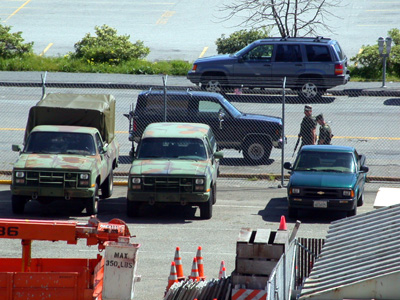 Speaking of soldiers, the Governor and the California National Guard are trying a little cost cutting sleigh of hand. What they’ve done is put two National Guard trucks in the CALTRAN lot next to the Bay Bridge so that it _looks_ like Guardsmen are here, but they really aren’t. The Guardsmen do come, but usually only on the weekends or when there’s another alert (most of which are not published, but we know when they happen).

Now, this won’t fool any terrorists. An hour of easy snooping will show there are no soldiers about. The only reason the powers that be are doing this is to fool, well, the citizens of San Francisco. News for you Gov, Guard — we’re foggy, not stupid. 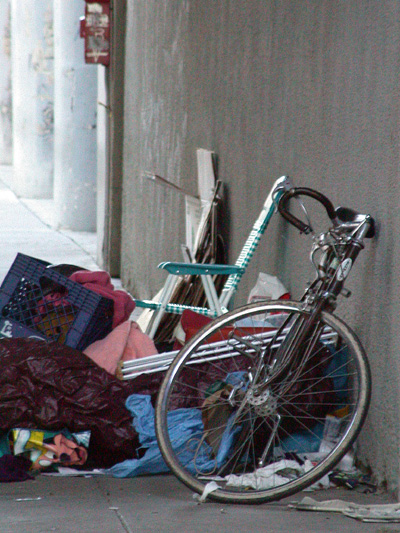 They finally took down the shack in the parking lot next to the Bridge. However, a homeless person has moved into the area, complete with bed. I’m not sure which impacts me more about this: that the person has “violated” the restricted area around the Bridge and no one cares; or the fact that the homeless have mattresses they carry around with them. Mattresses! In this the richest country in the world, I guess I shouldn’t be surprised that the homeless in San Francisco, probably one of the richest cities in the country, have beds. Looks like they’re here for the long haul, too. 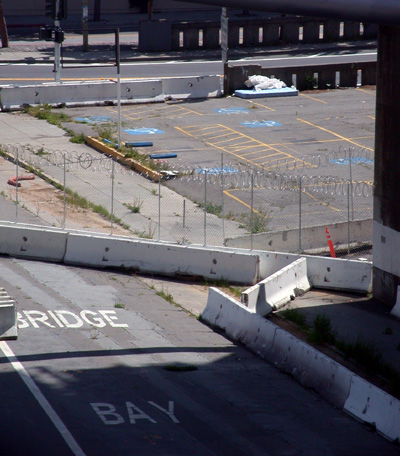 From an eco point of view, nature is reclaiming Beale Street. Maybe we can go down and dig up the cement and plant something. Grass, and a tree.

No, not a tree. A sniper could stand behind a tree.