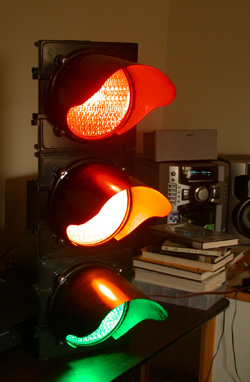 I’m heading over to San Francisco this week, and I’m taking things with me to leave in the storage unit for later disposal. Among these items is the traffic light you see to your right.

I picked up this traffic light years and years ago at a charity auction. It is a genuine stoplight that’s been converted to a lamp, with a separate switch for each light. When I got the lamp, it had regulation traffic light bulbs in it but they were so bright I had to pull them and put in regular bulbs.

Why the stoplight? I don’t know. It seemed the thing to do at the time. However, it has been useful. I used it for some of my indoor photography years ago, to add a tri-color effect as shown in the photo below.

Of course I picked up the light at the height of what I call my acquisitive period, that peak time when ‘stuff’ meant a lot to me. We had a large multi-room house, and I proceeded to fill it with as many things as I could — large couches, books, entertainment systems, curios, collectables, paintings, and of course, oddities like my stoplight. It was during this time that I bought most of my lava lights, which probably doesn’t surprise you.

This was all before criss-crossing the country twice, as well as getting divorced, and with each move I’d drop more items like a bird shedding feathers. Now, with the knowledge of yet more moves ahead of me I’m paring down to the core. This means the lava lights, the traffic light, many of the pictures, all the furniture, most of the books, and the mineral collection I held on to with the tenaciousness of a child holding its mother’s breast — they’re all going.

No regrets either. These items, they’re just stuff. Baggage. Dropping it all is like dropping anchors. 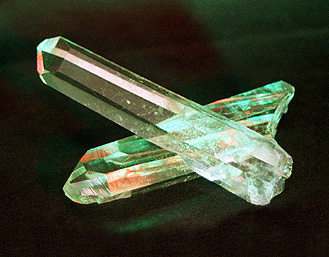 Today the humidity was high but the weather was cool, creating that clammy effect you normally associate with damp basements or old moss. The type of weather where people say, “You could cut the air with a knife, it’s so thick”. Not surprising for a land that isn’t much more than a very stable swamp, necklaced in by America’s largest rivers.

I visited the Chain of Rocks Bridge again, and walked in the cool air over the Mississippi, looking at beaver paw prints in the mud in the Missouri side that must have been made by one huge creature, the prints were so big. They were scattered about a spot at the river where something large had been dragged from the water. Drift wood for a dam? Catfish? Boat? 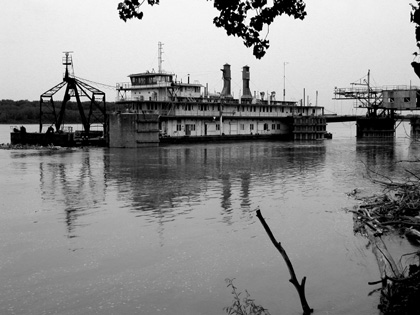 I’ve always lived on or near water, and couldn’t imagine living in any place that didn’t have water close by. My first home was in a farm house overlooking the Roosevelt river, and I learned how to swim when my Dad took me to the river and dumped me in. “Swim, dear”, he’d say, as I frantically dog paddled, floating over a drop off that turned the water from comforting sandy blue to deep unknown green black.

Once I learned to swim I lived in the water every summer, spending most of my time at a cove formed by a small hill cut off from the main land by the higher river waters. When I was in town, I lived at the pool, though I never have cared for the chlorinated waters.

After we moved to Seattle, I would hang around at Golden Gardens or at Green Lake, swimming or walking along the beaches, sunning in the grass. As an adult, I lived in apartments near or overlooking Lake Union.

When I started college in Yakima, I would spend lazy summer afternoons inner tubing with friends on the Yakima River, all of us tied to a small boat that contained our drinks. We had beer among the beverages, but most of us drank water or juice or pop — there was something about floating peacefully along, butt in the cool water, sun on your face, and good company that precluded the need for anything more. I thought I could just stay in the water and float away and down until meeting up with the Columbia and hence to the Ocean and one day wash up in Hawaii. Or Japan. When I met my husband Rob, he talked me into moving to Phoenix, not difficult because I was always game for a lark. Still, I was a little reluctant to move into a land which I assumed was nothing but dry desert and no water to speak of. However, when I got there I found no such thing, not while people insist on piping water where water has no right to be. Artificial water spots abounded, and even our apartment complex had a stream running through it, home to ducks we would adopt every winter.

One of our favorite places in Phoenix was the Phoenix Zoo with its natural habitats specializing in the Southwest, and the man made lake full of water fowl wintering in this hospitable home. We would grab some popcorn and munch it, sitting at a table, looking out over the lake at the birds. One time, we dropped some of the popcorn to some ducks near our table, which really wasn’t a good idea as birds from all over the lake converged on our table. We beat a hasty retreat, throwing popcorn down behind us to distract the flocks.

We ended up moving back to the northwest, first Ellensburg, then Seattle and Portland. In Portland, our home was over a creek that would over flow its banks in rainy weather, but was far enough away not to be a threat. What was a threat is how the water loosened the roots of the big firs, which the winds would knock over. During one bad storm we heard a monsterous crash and ran outside to find that an uprooted fir tree had cut a large van in half. I have photos of the van, if I ever find them, I’ll show them to you.

From Portland, we moved to Grand Isle, Vermont, a perfect home for a water baby like me. We were surrounded by water and I would spend hours looking over the lake, watching the play of weather on the hills in New York. It was with sadness that we had to leave this home I loved and move to Boston, but we lived in apartment overlooking the Chestnut Hill Reservoir, so I was content.

Of course, when I moved to San Francisco, I had a home on the Bay, which is what one would expect. And this brings me back to here, St. Louis, and my home among the rivers and the humidity, and walks on bridges looking at beaver prints in the mud along the banks. 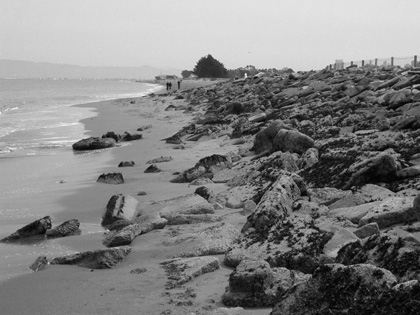 Not that my relationship with water was always smooth. When I was probably about 6 or 7, we visited some people that had a home on a small, weedy lake. They had a wooden dock next to their house and we were out sitting in the sun, enjoying the heat and the buzzing dragonflies, sitting in the warmth of the late afternoon green-gold light.

I’m not sure how, or by who, but I was pushed into the water, which would be no big thing except that somehow when I came to the surface, I hit the bottom of the raft. The water was thick with weeds and dark from the raft and I became confused and quickly panicked, choking in the still warm waters, clawing at the bottom of the raft, trying to find the end. Just as suddenly as I found myself in the water, I was grabbed by one arm and dragged out from under the raft. If I can’t remember who pushed me in, I can’t remember who pulled me out, either. But I do remember the warm green gold of the afternoon, and the cold green black of the shadow of the raft. 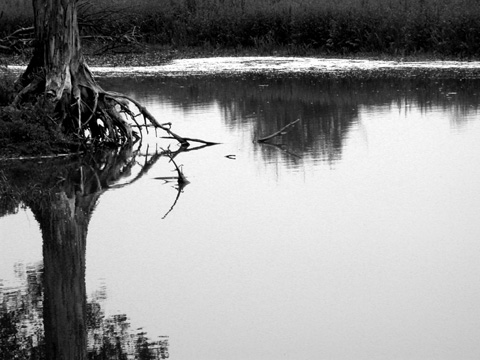 Later, when I was in Seattle, I was invited to watch the Lake Union hydroplane races from a large boat tied up to the floats around the track. There was large group of us, and we partied and watched the races and drank. And drank. And drank. With the sun and the fun, by the time the races were over, I was feeling no pain. I probably wasn’t feeling the boat, either.

Some of the people decided to swim in the cold Lake Union water, and I was at the edge of the boat watching and laughing when someone pushed me in. I landed in the water and felt the shock of the cold, surfacing to yell and laugh at the same time. I was wearing tennis shoes and jeans and gauzy blue shirt, all of which dragged me a bit, but I didn’t get out of the water right away. I wasn’t really feeling the cold or the drag of the clothes, and I drifted by the boat, laying on my back, feeling the sun on my face.

Except I wasn’t by the boat. The water lapped against the floats and pushed back from them, and took me with it.

I don’t really know exactly what happened at that point. I remember floating in the water, and the sun sparkling on the waves, until it looked like I was surrounded by a pool of gold light. That was all I could see, and all I could feel, the golden color, the soft coolness surrounding me. But into this idyllic scene, there were glimpses of another reality that intruded, harshly — of frantic shouting and being grabbed, of a boat and people ripping my shirt open. Of hands on my chest. A voice calling out, “She’s not breathing”. The sound of a helicopter.

From one moment to the next I was yanked from the peace and tranquility of the water and into the harsh glare of an overhead light, with a strange man yelling at me, slapping me in the face.

My parents were there at the hospital and my Dad looked worse than I, having made a four hour trip in two from Yakima. Because of the association of the race, the story was in the evening news, which made a mistake and reported that I was still dead. I remember with a grin — I can’t help it — recuperating at my Mom’s when someone called to give their sympathy and I answered the phone. 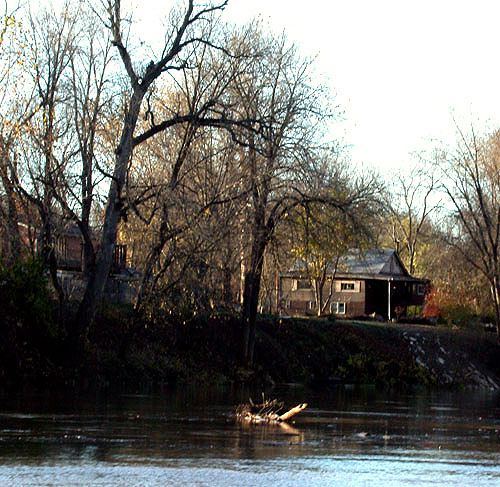