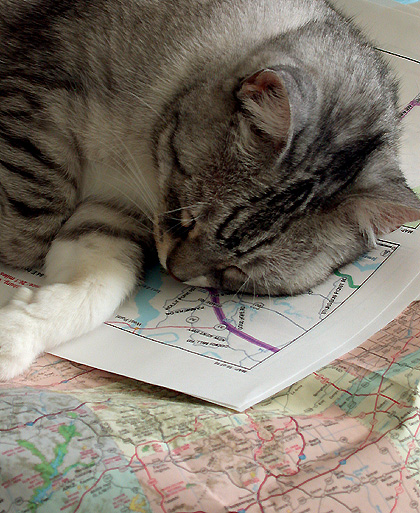 As is usual when I’m planning a trip, my favorite travel agent helped me with my maps and with my itinerary. I don’t know where I’d be without her.

I took this photo as I was experimenting with uncompressed TIFF and RAW format photos. Though TIFF is the only supported format with my digital camera, there is a utility you can download that puts a Nikon 995 into a debug mode, which produces RAW formatted photos; however, it doesn’t work with any of the other graphics utilities so I switched it back.

The move away from compressed JPEG is motivated by thoughts of filthy lucre and commercial gain. After reviewing sample photos sent last week, an editor of a travel magazine expressed appreciation of one in particular, and invited me to review the magazine’s editorial calendar and submit photos for upcoming stories.

However, as another editor explained, most print publications demand an uncompressed high resolution large format digital photo, and many prefer film; so I’m trying to push the 995 to its limits, as well as digging out my 35mm cameras. (Well, borrow them from my roommate whom I gave them to. )

Can one return to film after the joys of digital? One can when it takes 10 seconds to record a high quality TIFF image. Life doesn’t hold its breath and freeze in 10 second chunks.

Wood s Lot has been pointing to sites dedicated to rock art, such as Oasis Design a few days ago, and Ceprano Rock Arts. I have another site on rock art to point you to, Rock On, Rock On, created by Daliel Leite in honor of Bill Dan, the famous San Francisco rock artist. I’ve been chatting with Daliel for a few months now as the site has come together, sharing feedback and photos.

I asked Daliel why people balance rocks. He answered:

Human beings have been picking up rocks for a very long time. Some have used them to build absolutely stable pyramids designed to conquer time. Others would be tempted to balance a rock on the top of that pyramid, knowing that chance, a brisk wind, a slight earth tremor, or even an experimental poke by an incredulous observer will topple it over.

The art of Briton Andy Goldsworthy plays with this interation between “rivers and tides” of time, and his constructions have been the irresitible inspiration of many would-be balancers. In California, Jim Needham, “The Rockstacker”, has maintained a web presence and a Gravity Garden from his home on the Monterey Peninsula in recent years.

Far to the north, the Inuit of the Arctic traditionally build enormous stone figures of carefully placed boulders along waterways, announcing both their presence and their resourceful strength. Food may be found here, even shelter, say the stones — as long as they stand, so shall we.

Yet even the arid “balancing rocks” of the vast Southwestern deserts, perched in unlikely configurations, are merely frozen in their travel towards sand and sea. We know they could fall, should fall, will fall, in the fullness of time.

Balancing is play and it is work. It is dance and, for some, it is prayer. Human beings stand upright against gravity; balancing on slender legs; toppling over in the controlled forward fall called walking.

And then, of course, there is beauty in this craft. Each rock in a balance sculpture becomes perfect in its placement, its center of mass and gravity either directly above that of the one below it, or intricately interacting with others to share a mutual center, much as the Earth and moon orbit around a point somewhere between them.

You asked for some “philosophy”, Shelley, how’s this? Seeing the universe in a grain of sand; balancing all of life on the tip of a stone.

Daliel is balanced. Wood s lot is also balanced, eschewing an apostrophe and balancing a possessive among a plural, or is that plurals that are possessed, without the crutch of a wasteful, flirty, come hither character.

Am I balanced? I have never tried to balance a rock on end. I’ve never built a pile of rocks, layered one on top of another. I have skipped stones, flat beauties built for distance and tossed them at perfect angles across waters as still as death — but the stones have never traveled more than two hops. Never a third hop, that bedamned third hop.

I’m happy if I can just get through life, balancing one day after the other, without it all coming crashing down.