Today was cold but clear and I had to get out of the house or implode. Exploring around at the Missouri State Parks site I discovered a park not far from my home that I hadn’t been to before — Castlewood State Park. It was only 20 minutes away, 30 if I obeyed the speed limit, and it promised wonderful views of the Meramec.

During the drive I thought about this last week, and it seemed as if it was a tough week, or at least, it felt like a tough week. Do you know that feeling you get when it’s Saturday and you wake up feeling emotionally evaporated? I felt that way yesterday, and it was only Friday. I needed a walk, but not on paved roads and elegant little paths — I wanted to push myself to the limit.

(Of course, my current limit isn’t much beyond elegant little paths these days. But I wanted to find a new limit.)

After parking at Castlewood, I found the trailhead and looked up the hill and knew I’d found what I was seeking. 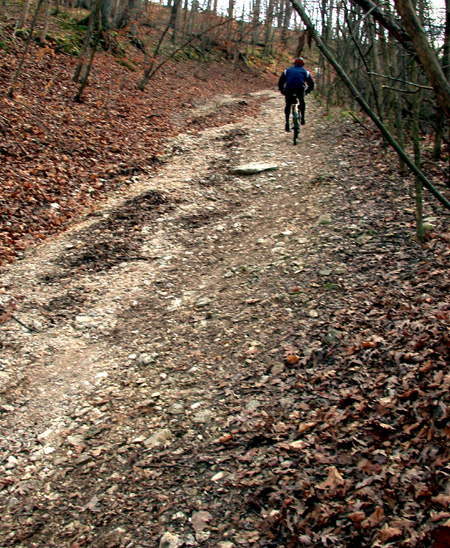 About half way up, tired from both the sudden steep climb and trying to keep footing on dead leaves layered over loose shale and wettish clay, I stopped by the side of the road to see if I was truly having a heart attack, or if I just needed a breather. However, instead of standing there panting my life away, I fooled around with my camera, taking pictures of other hikers and trail bikers. “See”, my actions told the people passing by. “I’m not standing here because I’m out of shape and any second I’m going to keel over in exhaustion. I’m a photographer, taking photos. And my face is always this red.”

I never knew how handy it was to have a camera with you until I used it for a prop during my uphill breaks today. However, if I had carried my full photographic gear instead of just my little digital, I’d be dead now and you’d all be fussing with your blogrolls, removing my link. 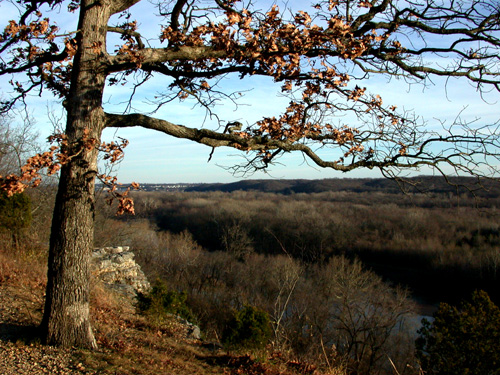 There’s time to think on a hike like this and my thoughts soon turned to the topic most on my mind lately, my impulsiveness and my temper — my passion, as the kind would call it. Yes, I also thought about weblogging, and the people I’ve met weblogging, too; both friends and foes, though at times, I’m not sure which is which. I thought about the discussion this week here and over at Misbehaving, by Gina and others, and how the topic was on being woman and invisible but the conversation ended up focusing on ‘look at me’ men.

We are too easily baited, too easily derailed, no, I am too easily derailed, slipping on these discussions as easily as I slipped on the rocks today. A mistake we/I make is to be defensive about our/my writing. If we believe what we write, we let it stand on its own — we don’t have to justify it, we don’t have to defend it, we don’t even have to debate it unless it gives us satisfaction and enriches the conversation. When we respond to criticism with ‘I meant to say…’, and it’s not true because we really did say what we wanted to say, then we’ve lost the high ground. No matter how outrageous or provoking the writing, the only one who can truly prove it false is the writer.

On the other hand, though, sometimes the high moral ground is lonely, and you think to yourself, “Pick your battles”, because it would be good to have others there fighting with you. The risk with this is that at some point you may find you’re no longer the one doing the picking and your high moral ground is reduced to a pebble in the ground that wouldn’t trip even the ungainly such as myself. What a conflict: we want to speak what we perceive is ‘the truth’, but we want to please. Rarely do the two go hand in hand.

These were the thoughts on my mind as I pushed my way uphill, cheeks billowing like a blowfish, forcing thoughts out between great gulps of air. When I reached the top I had to push all these thoughts aside and focus on the trail. It led along a bluff 250 feet above the river floor, and though the leaves were gone and the ground dry, the rocks were numerous and I had to watch my footing because there was little room for error. Particularly since this trail was literally at the bluff’s edge at times, and I suffer from vertigo. 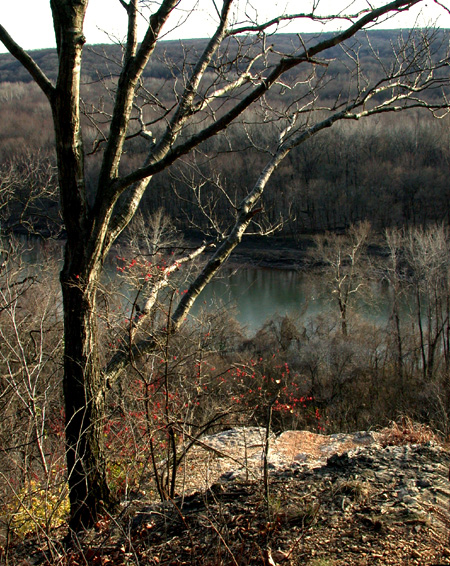 Remember those scenes in that great Hitchcock movie, “Vertigo”, when Jimmy Stewart would be overcome with his fear of heights? That spinning that would kind of make you feel sick? Unlike Jimmy, my vertigo isn’t crippling, though I cannot for the life of me walk to the edge of a cliff. I can and will walk along a bluff, but I have to push myself just to go out onto an outcropping.

When I reached my first outcropping and saw the view, I had to take some pics. I found a tree to lean against because when I would look through the viewfinder, I would get dizzy and start to lean forward, and slip about. But this bluff was just the first of many; there was one outcropping after another, each with a view better than the one before, and I found that my vertigo actually got a bit less with each occurrence. I started out leaning against a tree, but towards the end of the trip, I could actually push myself out to within a couple of feet of the edge and look down at a passing train below and snap one quick shot, feeling enormously pleased with myself.

(Before grasping behind me for something secure to hold on to because I was frozen to the spot, and ended up grabbing this poor little twig in the dirt and almost mauling it out of the ground just to get back on to the path.) 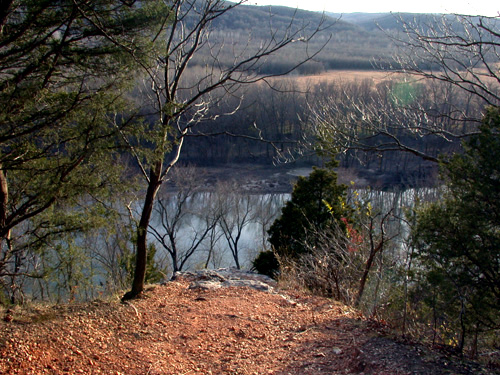 The wind was gusting today, at times, and at the top, looking down at river below and feeling the sun and experiencing the beauty, I’m glad I did push myself to hike today, though my foot is paying for it tonight. Every time you push yourself beyond your edge, you’ve created a new edge, and how can you not feel good about that?

I left my hike for later in the day, as I usually do, and there were few people about when I stood at my last bluff and watched the sun starting to set. I hiked alone and though sometimes I wish I had someone to turn to and say, “Isn’t it marvelous”, I’ll still hike, though I may choose different paths. 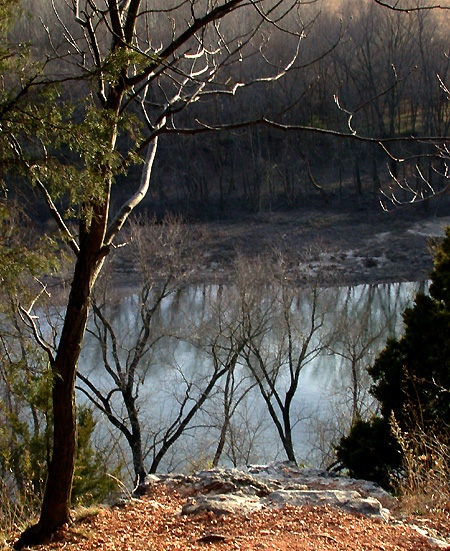 I write as I hike, alone, and not always looking for the easiest path, or the one most comfortable and secure. When I am finished though — walk or words — I feel good, though this is a poor word to use to describe the experience. I also feel lonely at times, too, like today while still feeling the glow from going that close to the edge, but wishing I had a hand to hold on to instead of that poor little twig.

Same with my writing — I wish with all my heart that I could write of lightsome things and beautiful dreams and could find my way into all your minds and hearts and pull your secret words out and publish them here so that you’ll all universally love me. Then my words would never have to sit here on this page, alone. Perhaps, like my hikes, what I need is to find a different path. 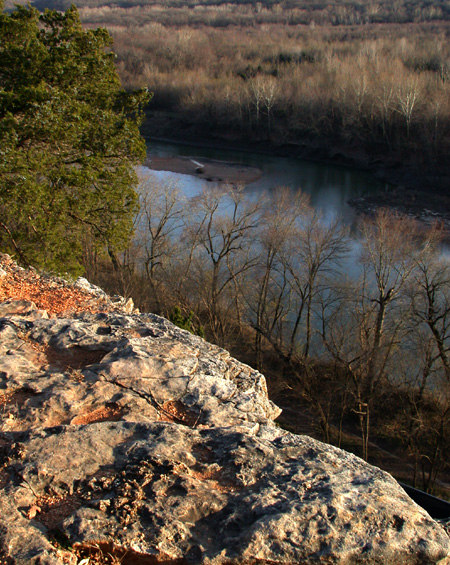 It is close to the end of this story, and the end of my hike. I was near the end of the bluff and tired, very tired. A rule of hiking is always go hard going up, easy coming down. What this means is to climb up the toughest part of the trail, because you have better balance and you use your stronger muscles when you walk uphill. You want to save the easiest part of a trail for descent, because descent isn’t much more than a controlled fall.

I wasn’t sure what I’d find to take me down hill at the end of the bluff, but I was fairly sure it would be the easier walk because of the location of the trail head where I started. And I was right, and pleasantly surprised to find a set of wooden steps zigzagging all the way down to the bottom. Best of all, I could use the guardrails on the sides of steps and use my arms to bear some of the weight because at this point I was limping rather distinctly.

The guardrails were worn smooth after years of helping other walkers climb up or down, and at the end was a tunnel under the tracks to the path along the river. When I got to the bottom, I met a party of mothers and daughters out for a walk who obviously were not familiar with the path and had started from the opposite direction. As they were about to start climbing the steps I called out asking if they were familiar with the path, but they didn’t hear me, chatting among themselves. I thought to warn them of what lay ahead, but sometimes people just have to find these things out themselves.

Besides, they had hands to hold at the top if they got tired. 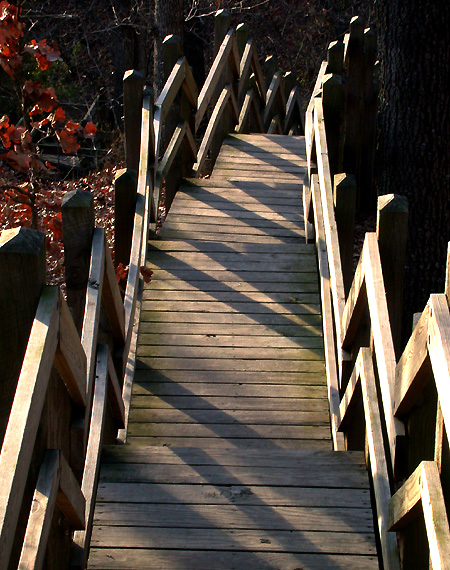