I had the nicest note today from Mike Rodriquez saying, “…partially thanks to you (your wonderful writings about the river and the countryside surrounding SL) we’re moving back to our childhood home in Lindsborg, KS.”

My first reaction on reading this was, “Wow!” followed by a particularly warm and fuzzy feeling followed not too long after with another “Wow” and then a more thoughtful, “Boy, I sure hope they don’t get hit by a tornado”.

Tornadoes, heat, astonishing political dichotomy, and the ever present bugs that see me as a walking buffet aside, on days like today I renew my love of this land, even though the humidity was enough to drench me within a half mile starting my hike. I can only nod when Mike talks about moving back to Kansas because I remember walking steep rocky trails overlooking one river one day; an old country road surrounded by flowers against the backdrop of yet another river the next–all within 25 minutes of my home– and think how can anyone not want to live here?

How many places can you walk the same trail, over and over, and still feel as if it’s bright and shiny new: one time small pink flowers grow out of short dark green depths; another, tall golden brown weeds form a mosaic of gleaming color against rich yellow and light green. 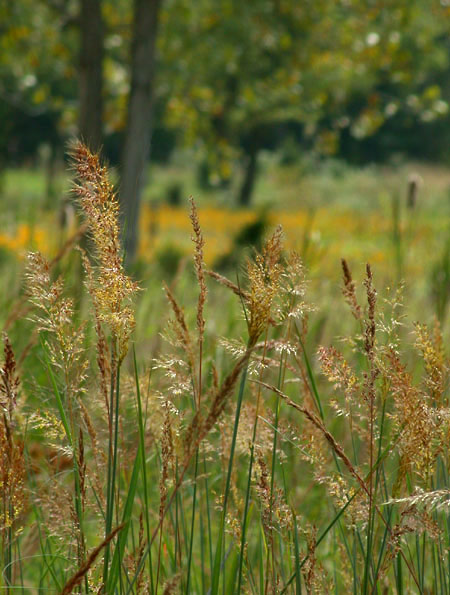 This week when I walked Powder, new small white flowers carpeted the forest floor and I felt like calling out, “Don’t you ever get tired of growing?” But that would only startle the fawns that have now become so used to me (or people really, but I like to think it’s me, personally) that they quietly graze by the side of the trail only a few feet away.

I hadn’t been to the Route 66 State Park since Spring because normally it can be quite warm in the summer, and since horses are allowed on the paths, it can also be a little odorous at times. But it’s also a good place to check for the beginnings of fall color in this part of the state (though a more accurate check requires a trip further north).

I had the park almost to myself, and when I started across the old Route 66 bridge, I decided just to stop, right there on the bridge, and take some photos. I’ve been wanting to try out my fisheye lens of the river and surrounding hills; normally a fisheye distorts an image too much, but this time, I think it worked nicely, capturing what I see every time I cross this old, rusted bridge.

There’s a specific path I walk when I go to Route 66, but I thought since I had the place more or less to myself (though stopping on a bridge to take photos isn’t the best of ideas in these times) I thought I would explore the back roads from the car, and then stop and hike wherever the mood hit. I’m glad I did or I wouldn’t have found this marshy pond not to far from the river. In the pond was a marsh bird, fishing for frogs and small fish.

When I parked the car to put on my telephoto lens, the bird hid behind the weeds, peeking out at me, coyly, as if it were playing a game of hide and seek. I just sat there in the car, camera pointed out the window, and soon enough the bird cautiously stepped out behind the weeds and resumed it’s hunting–giving me a chance to get a better picture than I normally can. 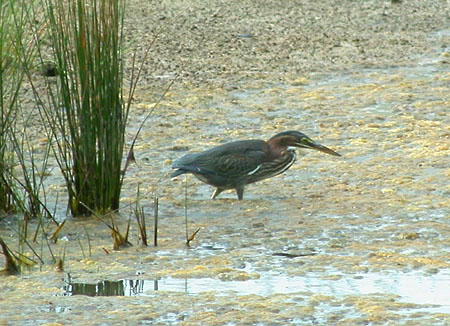 Are you ready to move here, yet?

Loren wrote about his trevails with technology today and I felt for him–good technology done badly is the craft of the devil. But when he wrote about walking to St. Louis to deliver something to me and it being probably faster than dealing with a rigidly uncompromising system, I thought there could be worse places to walk to, or around. 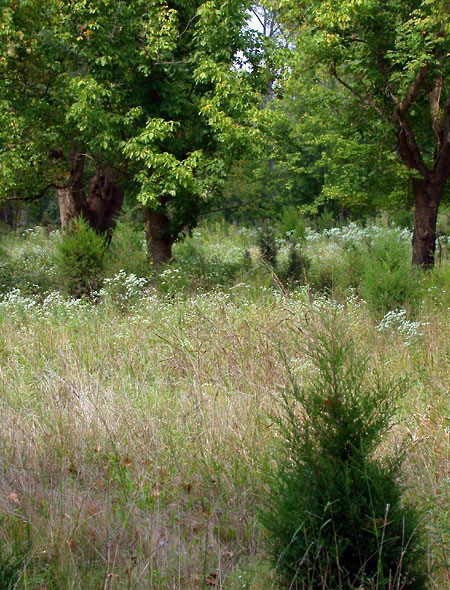 I ended up taking my usual walk, a circular route that goes from parking lot to river and back, past open meadow and closed forest. There was a group of deer along the way, but they’re shy unlike the ones at Powder and ran as soon as I got close. There’s one spot where I can climb down the hill to the water along a loose limestone and rock trail. The path was badly overgrown and I couldn’t safely make it all the way down the hill, even with my hiking stick. But it was nice to be clambering around a hillside on loose rock, feeling the challenge on muscles and balance.

You can lose yourself when hiking hills, though as Kierkegaard found, no one may notice:

The greatest hazard of all, losing the self, can occur very quietly in the world, as if it were nothing at all. No other loss can occur so quietly; any other loss–an arm, a leg, five dollars, a wife, etc.–is sure to be noticed. 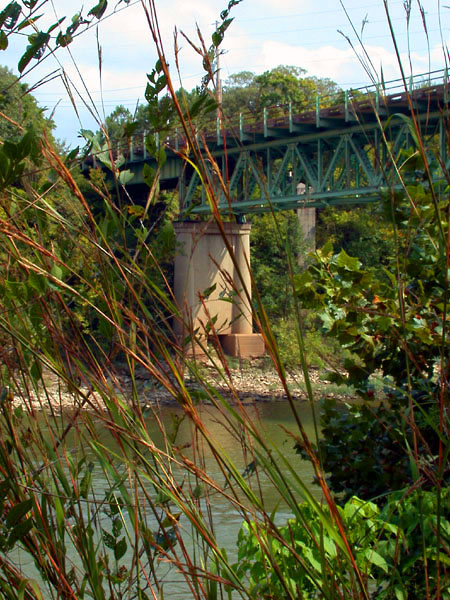