The program for the race yesterday featured a story about the 1989 balloon race, the only one where the balloons actually took off and landed in the same place (lack of wind). The story was so funny that I re-printed it here…with a photo. Of course.

A small issue with balloon “races”–of the Hare and Hound variety, such as the Great Forest Park Balloon Race–is that spectators rarely get to see both the beginning and end of the event. The balloons tend to fly away.

That wasn’t the case in the 1989 race. In fact, the balloons never left the park–they just flew from the Balloon Field to the eastern edge of Forest Park, near Kingshighway. Winds were extremely light. Hare pilot, Ted Staley, rightly judged that the balloons would never clear the city, or even make it to the Arch grounds, it was so calm.

The Hare landed across a lake. The hounds gently floated to the target. Some, literally. The ingenious pilots tried it all: Steve Lohr used the Slighshot Approach, with his crew swinging the basket of his flying seven-story balloon across the water to the ‘X’. Gene Grace tried the Cleopatra Crossing. His crew swam the lake, haulted the tethered balloon lines across, then pulled the basket to the target.

The race was contested greatly. Some heated exchanges were recorded. Then all were reminded that the trophy was a broken toaster, and protests weren’t allowed anyway because there is no protest procedure for the Great Forest Park Balloon Race (as noted by Ballooonmeister Henry Fett at the pilot’s meeting every year).

The result: Grace was awarded the win because of the damp effort of his crew. One balloon ripped through the trees, hit near the ‘X’ and was cited for second place and dim judgement.

I think you can see now why I enjoyed this race so much. 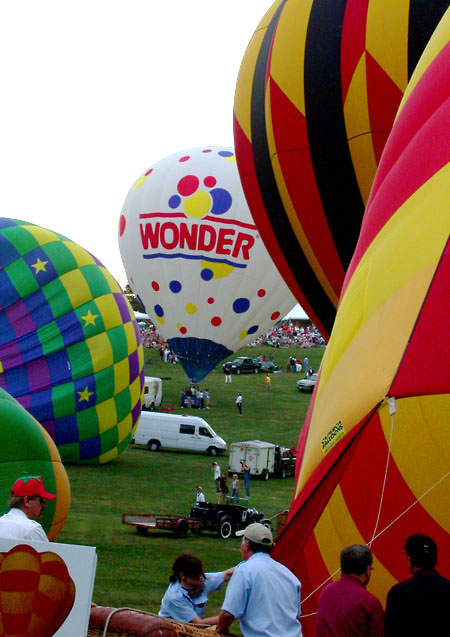 Someday I’m either going to get shot for trespassing or hit a deer in the dark.

The drive to the wildlife refuge was longer than I expected, and cloud cover cut into the afternoon light. By the time I pulled in, it was too dark and too gray to get any pictures. I did explore and do a little photography along a trail by the edge of the lake. Don’t expect much, though, the light wasn’t good. I’ll have to try another refuge next time, as this one doesn’t allow you to get close enough to the birds for photos.

Close enough to shoot though. On the other side of a stand of trees surrounding the lake was the area where hunters are allowed, and hunting season is in full swing. The sound reminded me of my childhood — walking along the edge of weedy ponds on a cold and gray day with a slight smell of wood smoke in the air and the faint faraway sounds of shotguns and the bay of hunting dogs. 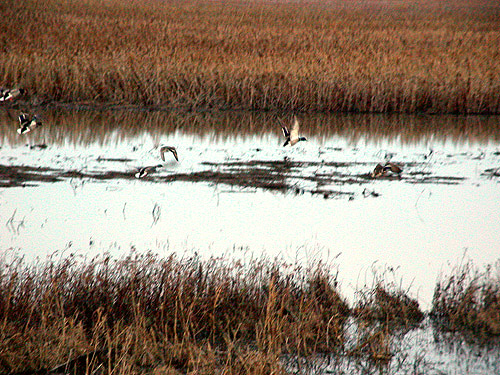 On the way back home I passed a field and in the sky were hundreds of Canadian Geese circling about preparing to land. They were as thick as starlings and considering their size, you can imagine how impressive it was. I didn’t even pull over, I just stopped on the road and rolled down my window and watched as several V shapes would meet and collide, only to break apart and swirl around each other.

Smart birds. Land in a farmer’s field rather than the shooting gallery waiting for them at the lake.

I used to watch the geese circle for a place to land when I worked for Boeing years ago. We worked in a new building built on former wetland, in an area that formed the new industrial park of Seattle back when Seattle’s fortunes were just beginning to take off. I worked there for a few years and every year, there would be less green and more cement and it would be harder for the migrating geese to find a home.

Finally, all the geese had was a strip of green between two roads not far from where I worked, but my last summer there, they dug up the green and put in rocks and some tasteful evergreens. That Fall, when the geese arrived they circled about and we could hear them but not see them in the drizzle. Their voices became fainter and fainter as they looked for their little strip of land but couldn’t find it.

Luckily today’s geese had no problems. 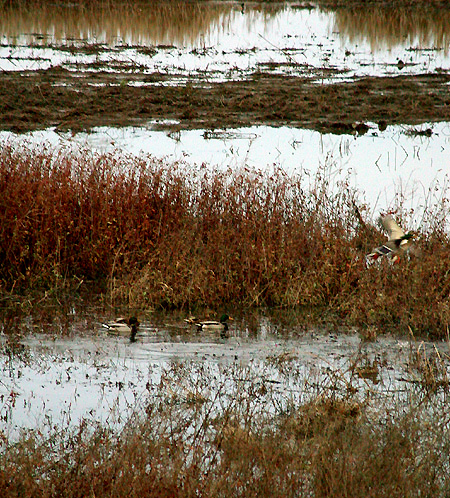 There was an old house on the side of the road I’d seen coming down that looked perfect for photographs. The light was right for pictures on the way back, and I wasn’t worried about someone being there because the place looked like no one had lived there for years. I pulled over and grabbed a couple of shots before the door opened, and an old man came out on the porch.

“Can I help you with something?”, he asked and the way he asked it let me know that my answer better be No.

“Sorry, I saw your house from the road, and it was so, uhm, pretty, that I wanted to stop and get a closer look.”

“Well, this is private property Miss. You’ll want to be moving on now.”

“Yes, uh, yes. Sorry.” I jumped in the car and backed out on the road, barely looking to see if anyone was around, all the time being watched by the man on the porch. It was only then that I saw the TV antenna on the old roof. 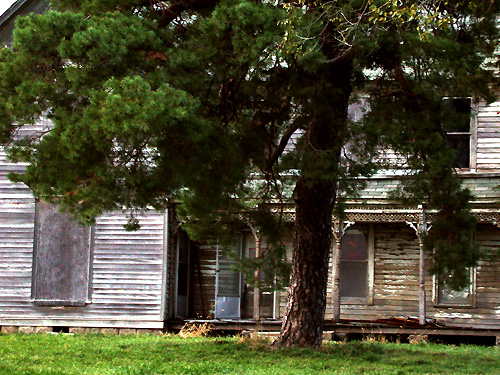 Today was my first long trip I’ve taken in some time and I found that I didn’t enjoy it as much as I usually do. I had another road trip planned for the end of the month but all I want to do now is stay home, go for walks in familiar, favorite places, and read.

I’ve been in such a quiet mood lately, and it seems worse tonight. Maybe its a combination of tooth and jaw ache — driving home in the dark on back country roads in the middle of hunting season is asking to hit a deer and I clench my jaw every time one jumps along the side of the road, or you see your lights reflected in their eyes. As much back country driving as I do, its only a matter of time before I hit a deer–they’re as thick as mice in the Missouri countryside. 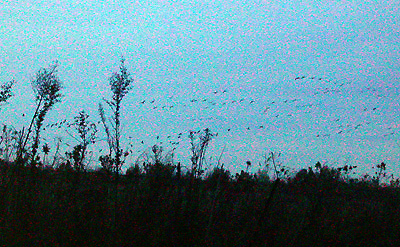 I did come close to hitting an animal today, but it wasn’t a deer, and it wasn’t at night.

On Highway 36 heading west I was going along at about 55 with a small white car hanging off my back fender like a burr on a donkey’s ass. It’s never a good idea to tailgate in any circumstance, but its worse in the country because there’s always something in the road.

Sure enough we topped a small rise next to an overpass and I saw a dark four legged figure by the side of the road. I pumped my brakes to warn the car behind me of danger ahead and to get his butt back. Just when I recognized that what I thought was a deer was, instead, a large dog, the dog moved on to the road and just stopped in our lane and looked towards my car. I hit my brakes, hard, and the car behind me ran off the road on to the shoulder to avoid hitting me.

The dog didn’t move, just looked at me with its shoulders hunched and tail hanging limply down. The driver of the other car–all blonde haired, blue eyed 30-something young privileged white mama’s boy of him–was quite agitated but I wasn’t going to run the dog over because he was driving like an idiot. I ignored him. He wasn’t hurt, just inconvenienced, and hopefully given a well deserved lesson. He took off while I was still in the middle of the road, looking at the dog, it looking at me.

When the shoulder was clear of the nuisance, I don’t know why I did it, but I pulled over, put on the emergency lights, got out of the car and called out to the dog, “Here puppy.” Puppy?

The old dog had walked to the other side, but stopped, turned around, and looked at me when he heard me call. Cars would travel between us, but we just stood there looking at each other. It was a very large dog, with grey matted hair that looked as if it was coming loose in patches. It was so thin, you could see its ribs. And its tail stayed hanging down, slight tipped in so that it was almost but not quite between its legs.

I’m not a city-bred girl and I know the dangers of an unknown dog on a back country road. It was a damn foolish thing to stop, and worse to get out of the car. I suppose there was something about its eyes that made me stop. I wondered though what I would do if he did come up to me.

He did this odd little dance, heading towards the hill, and then turning back to the road to face me, then back to the hill, as if he wanted to come to me but he’d been offered that hope before and it always came out false. Eventually he headed up the hill but partway up, he turned around one more time and just looked at me for a moment before disappearing over the top.

As it disappeared, I knew I didn’t do that dog a favor by slamming on my brakes. 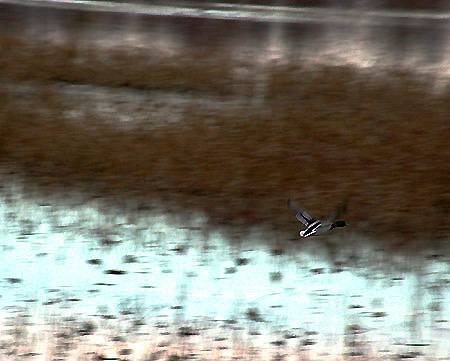