With the President’s speech Monday night and the ultimatum, which we know is only a prelude to war, it’s tempting to feel that we’ve failed in our efforts to find a peaceful solution to the Iraqi conflict. All day Monday, I felt dragged down by the knowledge that we’ll most likely invade Iraq within a few days. I felt I had failed. Not me as one of a number of American citizens, but me personally.

I went for a ride to get my car washed and ended up on the freeways and in the back country of the Ozarks not even sure where I was, so caught up was I in this personal sense of failure. Time to blow out the candles, put away the signs. What purpose the fight for peace when we face certain war?

But Monday night, as so many of my virtual neighbors were quiet, I went out to the more well known warblogger sites. I was curious to see their reaction to the President’s speech. Would there be rejoicing? Would they be as quiet? One site I I went to was Little Green Footballs and read this web site’s coverage of Rachel Corey’s death.

Regardless of whether you think Rachel was a foolish young woman or a brave soldier of faith, her death should be worth more than ridicule and disdain. What did one person say, in response to hearing that Rachel burned a mock flag? “Thankfully, the tractor was not mock.”

Yes, thankfully this 23 year old idealistic woman is dead, because a photo showed her at a demonstration, burning a mock American flag. As the LGF crew said, that will teach her for ‘lack of support for freedom’.

(Note to self: go out and buy 365 paper American Flags. Burn one per day, starting tomorrow.)

Thank you, the small, the petty, the frightened, the ignorant, the hate filled, the bigoted, the self-serving, and the racist that take such delight in bathing their hands in the blood of the ‘enemy’. Thank you for pulling me out of my funk, and giving me new purpose again. After all, if we give up the fight now, the only voices that will be heard will be yours – and that would be another tragedy.

No, now is not the time to give up. In fact, it’s more critical then ever that we keep the peace movement going, if for no other reason then to let Bush know that we are watching him.

Every time civil rights are abrogated in this country in the name of ‘war’, we must point a finger and cry ‘Shame!’ so that Bush knows we are watching him.

And especially, when this ‘war’ is over, if we can call this mockery a ‘war’, we must let Bush and Halliburton and all of those who seek to capitalize on the suffering of the Iraqi people that we are watching them.

Yes, it’s time to blow out the candles; time, instead, to light a blow torch bright enough to be seen in Washington DC. Yes, it’s time to put away the signs, because they’re too small. Let’s write a sign that the President can’t miss. One that he sees first thing in the morning when he gets up, and last thing in the evening before going to bed.

As the President and his cabinet and the Congress have chosen not to give the world peace, we’ll do the same. Now more than ever, we need to watch and speak out and disbelieve and yell and protest and demonstrate and let the President of the United States and those who would profit from this war know, we are watching them.

President Bush has spoken, “No peace!” So be it. No peace. Not a moment’s peace will be given until this battle is over, and until we leave that region, and give the Iraqi people true peace.

The organization Instead of War in St. Louis is planning an all night wake the first night bombs are released on Iraq.

The Republicans and the White House have called Democrats “unpatriotic” for speaking out against the upcoming battle with Iraq. Senator Kennedy asked the question that still waits answer: How much is this going to cost. Senator Daschle declares that Bush has failed diplomacy. Both are declared to be unpatriotic.

But then, I’m also unpatriotic, because I think Bush has an agenda that doesn’t serve this country. That’s speaking out, so therefore I’m unpatriotic. In fact, I’m a traitor, which is what one of the people called those of us who participated in the candlelight vigil on Sunday.

I have a poster I’d like to hang in my window. It shows a peace sign with a yellow ribbon, with the words “Bring them home now”. I like it because it shows that I support the military, but not the war. I won’t display it, though, because I have a cat; I’m concerned that if I put the poster up, someone will throw a brick through the window and my cat will get out, and get lost or killed – she has no commonsense at all.

After President Bush’s speech yesterday, from one moment to next, the stakes have changed for those of us who continue to protest the President’s actions, in Iraq and at home.

It is better to light a candle
than to curse the darkness. 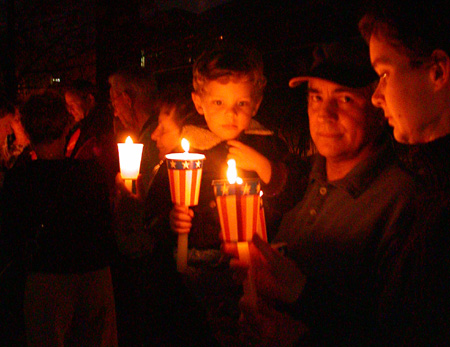 Over 300 people showed up to light a candle for peace. They lined both sides of the street and stretched a couple of blocks. For the most part, those in the cars who passed between raised their thumbs and honked in support; however, there were a few that were emphatically Bush supporters.

About half way through the hour long vigil, one lone dissenter showed up – a middle age man who stood across the street, holding up a Marine Corp flag. He nodded pleasantly at the people holding the candles; they waved back.

The people were smiling, but quiet, subdued. That moment of truth weighed heavy, as we stood shoulder to shoulder in an unbroken line of flickering light, sending a message of hope as ephemeral as the flame. 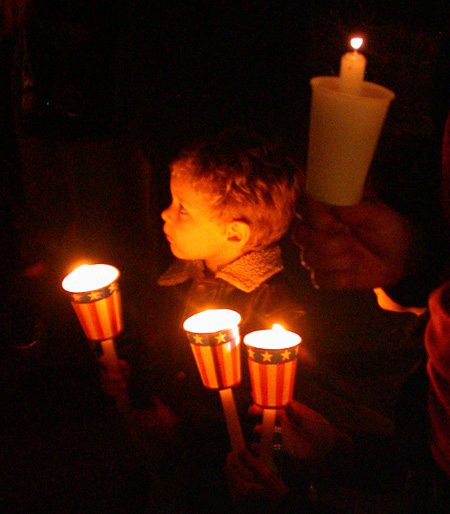