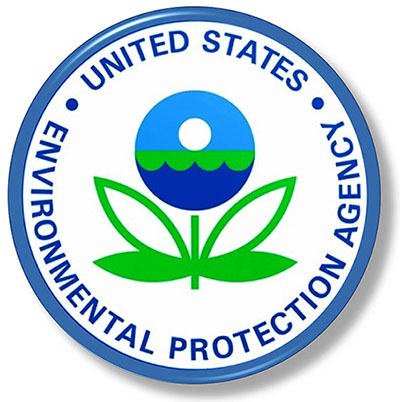 The EPA has responded to the lawsuit, asking the judge to refer the case for Alternative Dispute Resolution, rather than an extensive and costly litigation. As they note in the request:

Reasonable, and not the fire breathing over-reaching agency as portrayed by extremist libertarians, who believe everyone can do anything they want to the water and the air.

Much ado about nothing.

Last year I wrote about a Wyoming family and the big, bad EPA huffing and puffing at their door. Seemingly, the Andy Johnson family was being threatened with outrageous fines, just for putting in a simple stock pond. A little digging, though, showed that the story was far more nuanced. For one, the family had basically blown off any previous attempts at communication from both the Army Corps of Engineers and the EPA. It wasn’t until the EPA sent a notice of violation did they respond to the communications—by contacting the press and their congressional representatives.

In the story, I foretold of the likelihood of our friends at Pacific Legal Foundation (PLF) being on their way to the Andrew Johnson family’s side. This last week, my fortune telling skills were vindicated, when PLF filed suit in federal court on behalf of the Johnsons. And, as is typical for a PLF court case, the (primarily conservative) media has been inundated with videos and photos of family members, little children, and lots and lots of American flags. An example, complete with strategic American flag placement:

Now the refrain is that the Johnsons are being threatened with millions of dollars of fines, all because they put in a small dam, to create a little pond to water their livestock. 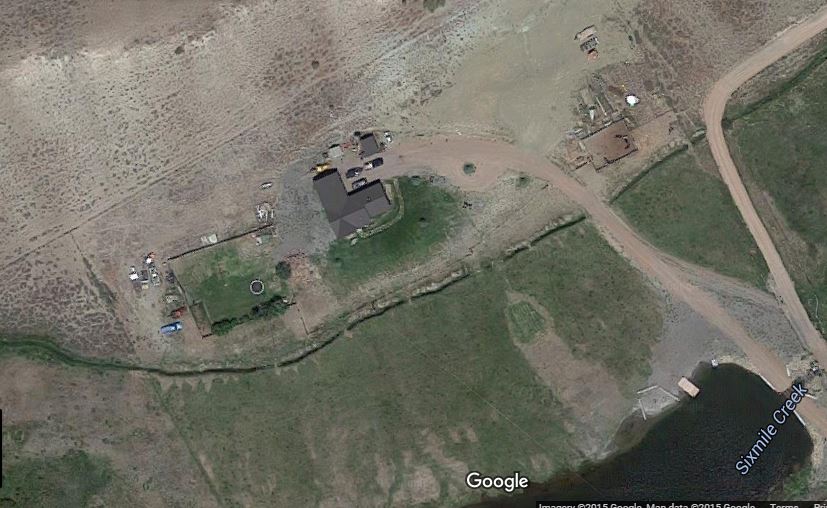 The dock is still there. That’s that white rectangle next to the pond.

It’s a curious thing, this dock. In the court documents, PLF provides a copy of the permit application the Johnson’s filed with the state of Wyoming. In it, the state declares that the permit is “…for stock watering purposes only.” So if the water is for stock watering purposes only, why a dock? Come to that, why does the pond, whose only purpose is to water livestock, need to be stocked with different kinds of trout, ducks, and geese?

As for the livestock, returning once again to Google maps, I checked for the herds of cow, horses, and/or pigs that would necessitate a stock pond over an acre in size.

And I found what looks to be a pen with five animals, either cows, horses, or some other animal about that size. 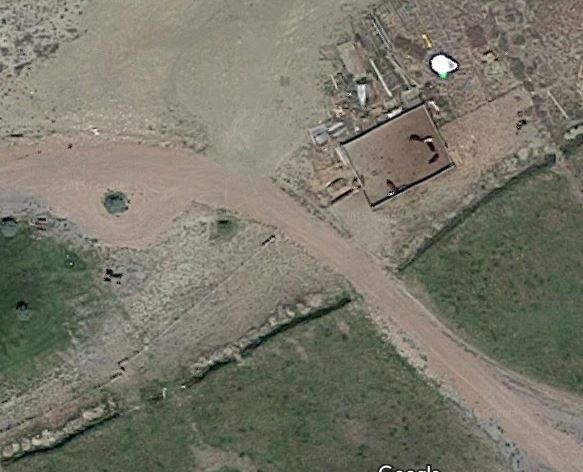 It is true that cows and horses are thirsty creatures; they need approximately 12 gallons of water a day. But a stock pond with over 5.07-acre feet of water? This is equivalent to 1,652,066.74 gallons. Via a Google search, I found an Army Corps of Engineers document that notes 50 head of cattle only need a stock pond of 3/4 acre. There is absolutely no way that Johnson will have 50 head of cattle on that small 8-acre plot of land.

In their complaint, the PLF lawyers stated the work was exempt as a “construction or maintenance of farm or stock ponds.” But what the lawyers left out is the line that proceeded the listed exemptions, ” Except as provided in paragraph (2) of this subsection, the discharge of dredged or fill material.” In paragraph 2, we find:

In other words, if you’re maintaining an existing pond, no permit is necessary. If you’re building a new one, however, you need that permit. More importantly, the Army Corps of Engineers needs to ascertain whether the work being done is going to have an adverse effect on the water system.

Now, according to the folks at PLF, the Johnson pond isn’t having an adverse effect on the water system. In fact, according to their court documents (press releases, YouTube video, and so on), as well as an environmental assessment provided by Kagel Environmental LLC, the Johnsons have actually improved the area. But then, the Kagel report also mentions that, in their understanding, any stock pond is exempt from the CWA permit process. Well, we already know this isn’t true, and we’re not experts. But, let’s continue with the report.

In the report, the Kagels noted in their observation that Six Mile Creek terminates in an irrigation channel, and hence does not connect with any water system that would be considered covered under Section 404 permitting. What’s interesting, though, is when you read the permit application the Johnsons made to the state, it does note that Six Mile Creek is a tributary to Black’s Fork River, which is, in turn, a tributary to Green River—a river that transcends state borders and is most definitely under Section 404 permitting.

The Kagels also note that the pond captures the water, but then releases the same volume of water through a spillway. Therefore, they conclude, the pond doesn’t restrict the flow of the water. But artificially inserting spillways and dams into a water can have an extreme impact on the vitality of the water system, as well as an impact on the wild life dependent on it. And it doesn’t change the facts of the case: the Johnsons did dump 12 cubic yards of fill and concrete into the Six Mile Creek without first having such actions vetted by the Army Corps of Engineers.

The Kagels also claim that the Johnson pond improved the health and vitality of the water system. Returning again to Google Earth, the following are satellite images taken in 2002, 2006, and 2009. Seems to me that creek has always a viable ecosystem that’s natural for the area. No trout, true; but natural. 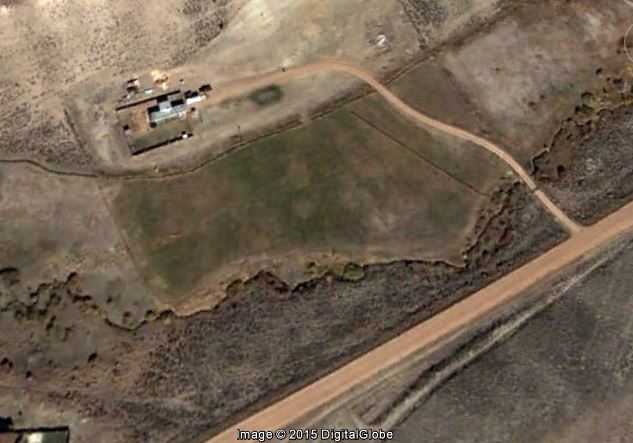 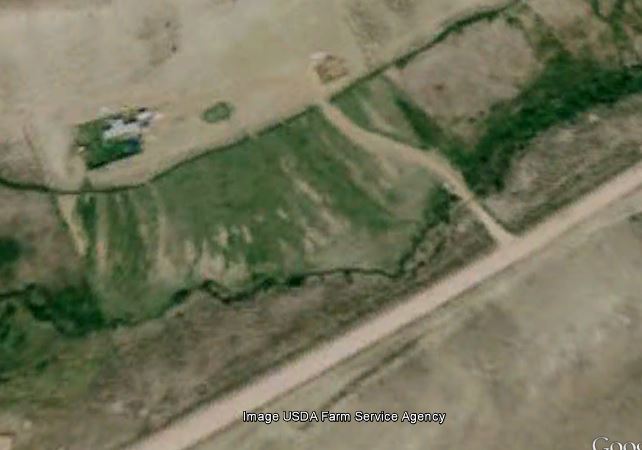 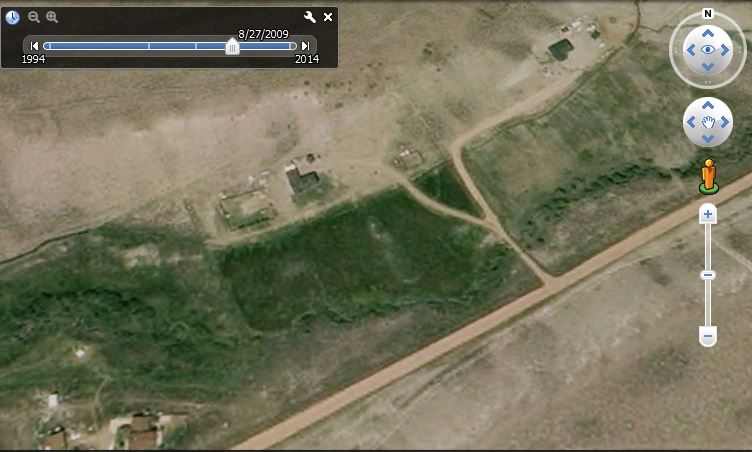 One other bit in the Kagel report, was a rather odd paragraph in the cover letter for the report:

Before summarizing our site inspection, findings, and conclusions, etc., we’d like to clarify that despite the contention by EPA that they believe the alleged violation site is located in Utah, Mr. Johnson has assured us his farm is located in the state of Wyoming. In a “Letter of Potential Violation” dated May 22, 2013 addressed to Mr. Johnson and signed by James H. Eppers, Supervisory Attorney and Arturo Palomarers, Director, EPA’s Office of Enforcement, Compliance, and Environmental Justice, EPA stated that the alleged violation site is in the state of Utah. It’s therefore reasonable to assume that there may be another alleged Clean Water Act violation in Utah by someone with the same name, or in the alternative, that the EPA simply was unable to accurately identify or determine in which state Mr. Johnson’s farm is located.

This writing is both petty and unnecessarily snarky. That a simple typo would draw forth this paragraph leads one to suspect that there is a degree of personal animosity between Ray and Susan Kagel and either the EPA/the Army Corps of Engineers, or both. A simple Google search proves this to be true: Ron Kagel had sued the Corps, his former boss, related to its actions regarding what it perceived to be conflicts of interest, and what he claims is whistleblower retaliation. In addition, Kagel also claims that the Corps is targeting him in retaliation because of his work with another PLF court case, Sackett v EPA. We don’t know, though, the impact of his work on the case, because it was put on hold for a time. The case was only recently re-opened, and without the same fanfare as the Johnson Pond.

Nothing is ever as simple, or as black and white, as portrayed in press releases and media stories. PLF portrays the EPA as a bully, and Andy Johnson, an innocent farmer. Yet Johnson is a welder, by trade, who stated the pond was for the purpose of livestock watering but then builds a dock and stocks the pond with trout. In addition, in all of the press releases, PLF doesn’t once mention the fact that the EPA and the Army Corps of Engineers actually reached out to Johnson, several times, trying to open a dialog about his dam, and what he could do to mitigate any violation of the CWA.

The EPA has already remarked that it rarely issues the fines mentioned in its violations. It has to mention the applicable fines, though, as part of the legal document process. I’ve followed several EPA cases and even with large corporations, the EPA rarely issues the maximum fines it could assess. Most of the time with smaller cases, it just wants corrective action. But saying things like fines of $37,000 a day, or Johnson is facing millions in fines from the federal government, plays well to those who do little more than skim headlines before getting ready to pull out the pitchforks.

A simple pond is less so if you consider the ramifications to the rest of society. If everyone who had a creek, stream, or river flowing through their property decided to dam it up, what would be the overall impact? Rather than majestic rivers, and crystal clear creeks and streams we can all benefit from, we’d have a succession of stock ponds, geared specifically to each owner’s use, regardless of the impact on others. We’d have court fights, and gun fights, and a great deal of animosity between neighbors.

The Kagels map of the pond shows it stopping at the border of Johnson’s property: 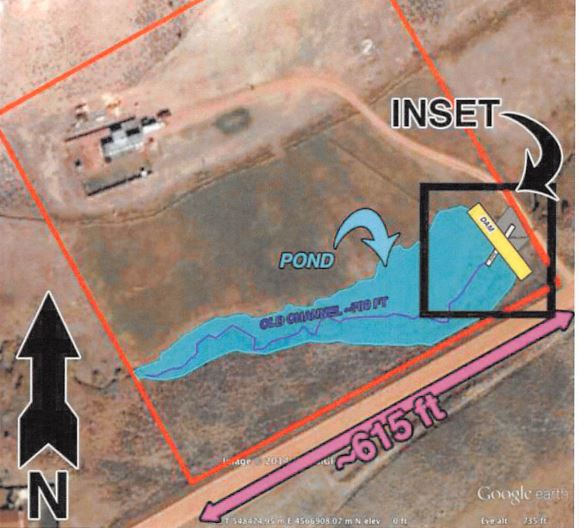 Returning to the Google satellite view of the property, taken in 2014, we can see for ourselves that the water is backing up on to the neighbor’s property. And one thing the satellite images can’t show is how much the creek’s ecosystem has been impacted by having the dam in its path. Or what exactly happens to that flow of water in a dryer year. 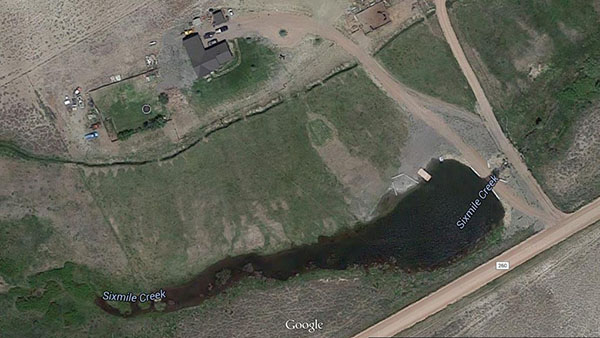 I’m not a lawyer, but in my opinion, the court case will be a slam dunk. The Johnsons dumped 12 cubic yards of material into a creek, which ultimately feeds into a river that crosses state borders. They did so without a permit. Rather than work with the EPA or Corps, they turned to the Tea Party Press and exclaimed about the little guy and the big bad federal government. As it is, their pond seems to also be a violation of Wyoming state law, since the Johnson’s are, in my opinion, using it for purposes other than watering their stock. I imagine, though, that Wyoming would just as soon be left out of this bramble broth.

We need to take a moment to remember exactly what the Clean Water Act is for, and why the EPA is enforcing it: both exist to ensure clear, clean water and healthy ecosystems that benefit all of us, not just a few. We can’t continue to get caught up in this David vs Goliath romance, manufactured by libertarian interests who would like nothing more than to see our rivers reduced to a series of privately owned, barb-wire fenced ponds, each with their Stars and Stripes flag, flying high.