In 1997 I woke up with a new decision: I wanted to move to Vermont. I talked this over with my now ex-husband and we chatted and thought about it and decided that yes, we would move to Vermont from our home in Portland, Oregon; and move we did, in May of 1997 to a small farm located in Grand Isle, in the middle of Lake Champlain. 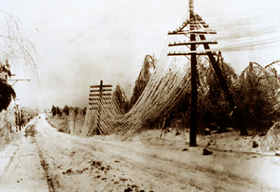 Our first winter was pure Currier and Ives, from soft snow covering the yard, to spotting our first cardinal, to watching a red fox hunting in the back yard. Snow fell about Halloween, and stayed from that point but it wasn’t a problem getting around. Until January that is.

It started as the oddest sort of rain, and we walked out into the yard to see it up close. We’d seen freezing rain in Oregon, but not like this, and not so heavy. A short time outside left us glazed; covered in a thin layer of transparent ice–like jelly beans after getting their confectioner’s coating.

We, very carefully, made our way back inside, and spent the evening looking at the ice building up on the deck, the power lines, and the trees dotting our property. Reflected in the outside light, the ice was beautiful, but we also noticed that the power lines were getting much lower than normal, and the tree branches seemed to be dipping too low to the ground. However, not much you can do about an ice storm, so we went to bed.

In the middle of the night a large crash woke us. We ran to the bedroom window, opened it, and looked outside to see what was happening. Another crashing sound came from a stand of trees that stood between us and one of our neighbors. Another crash sounded, and another, and another, and so on into the night, as tree branches, weighed down by the ice, broke and fell to the ground.

Nature had created an invisible monster that was decimating all of the trees around our house, and this monster worked tirelessly through the night. The next morning dawned cold, and clear, and most of the trees around us were decimated. Overhead a group of National Guard helicopters flew by, the only thing moving anywhere.

You would have thought we had been at war. Instead, this was the aftermath of the Great Ice storm of 1998.

Particles of moisture are present in all clouds, but this doesn’t result in any form of precipitation until the particles become too large (and heavy) and the state of equilibrium that the particles existed in is upset, and rain (or whatever) is the result.

Freezing rain is a specific form of precipitation, as is rain, drizzle, sleet, and hail. It is the result of water particles falling as snow, then encountering a layer of warm air where the particles melt into rain. However, before the rain hits the ground, it goes through a cold layer of air just before the surface of the ground. The rain is cooled, forming supercooled drops– drops that are cooled to below freezing but are not frozen.

When these supercooled drops hit the ground, they thin out and freeze, instantly, forming a thin film of ice.

Even when very thin, freezing rain–also known by the names of silver thaw or glaze–is dangerous; You’ve experienced this yourself if you’ve ever tried to walk on a surface covered with the ice, or worse, tried to drive on it. But the real danger with freezing rain is the build-up of ice on trees and power lines. The weight of this ice is enormous, and can cause tree limbs to break, fell large trees, and cause power lines to sag and break. A severe ice storm can be as deadly as a hurricane, though–usually–not as devastating to property.

The Northeast does get hit with freezing rain in the winter, but the storm that occurred in January, 1998, was unique. Looking at the storm from the perspective of its impact in Canada, the amount of precipitation totaled 100 mm (about 4 inches) in Montreal. The last big ice storm in Canada occurred in 1961 and this one only dropped about 30-40 mm of ice. This is a significant difference. Think of 4 inches of ice coating a tree branch or street or power line, as compared to ice about an inch thick.

Add to this the extreme cold in the northern reaches of North American in January, and loss of power. If you don’t have a wood stove, you’ll freeze to death; several people did die of hypothermia–on our island, as well as elsewhere in the US and Canada. Others died from falling limbs and poles, or from carbon monoxide poisening from using karosene stoves in areas not adequately ventilated. More than 25 deaths were blamed on this storm.

The National Guard, power crews, and other public workers were outstanding, seemingly working days without taking a break to re-establish power lines, check to make sure people had firewood, or evacuate those folks in need of help.We even had crews come in from Hawaii.

The job of restoring power was enormous, with millions without power, than hundreds of thousands, then thousands, and finally, weeks later, down to the last few hundred.

As power was restored, we were asked to put signs in our yard if we saw that a neighbor had power and we didn’t so that crews could tell where work still needed to be done.

We, my husband and I and our cat, Zoe, were also lucky, in that we were without power for only three days. Additionally, we had a wood stove that could heat about half the state, and which could also be used for cooking. I even had my laptop and could check my email once a day (we did have phone service). This and our books and the solar powered radio (if you don’t own one, buy one) got us by.

Others did not fare as well as we did, and went for weeks without power, living in shelters, or trying to make do in their own homes.