No matter how many stories I read or photos I see, I continue to be shocked, daily, at the destruction in Joplin, Missouri.

If you want to help, there are several good relief agencies you can donate to. Since this is a site about dogs, if you want to help the pets in Joplin, I recommend donating to the Joplin Humane Society. You can also help the society by purchasing items on an Amazon Wish list set up for just this disaster.

Unfortunately, as happens in these situations, rumors of nefarious deeds have surfaced about the rescue effort in Joplin. I wanted to take a moment to address the ones I’ve heard.

Second, rescue organizations are not converging on Joplin to “steal” pets and take them elsewhere. There are sufficient numbers of dogs (and cats) needing homes in every part of the country, no one needs to sneak into Joplin in the dead of night in order to abscond with the pets.

There was a rumor that a Minnesota rescue had swooped down and grabbed some dogs in an out of state rescue, but the story hasn’t been verified, and it doesn’t make any sense. For one, the area has been closed off by police. For another, Minnesota had its own tornado hit, and its own problems. Lastly, no rescue would do such an action without coordination with local animal organizations.

Another rumor is that if people don’t pick up their pets in 14 days, they’ll be destroyed. The Joplin Humane Society has already stated they will keep a pet for a pet owner as long as necessary if the owner has lost their home. However, the specialized animal rescue warehouse may only be open for the initial two weeks of the disaster. I imagine how long it’s open depends on how quickly the numbers of displaced pets shrink. Once the number of pets shrinks to a size the Joplin Humane Society can manage, they’ll close the warehouse and handle the rest in-house.

If dogs and cats and other pets aren’t claimed over a certain period of time, then the Humane Society will have to assume they’re not going to be claimed and put them up for adoption. However, that shouldn’t be happening for at least a couple of weeks, perhaps even longer. Frankly, if no one has claimed a cat or a dog in a couple of weeks, sad to say, it may be because there is no one left to claim the animal. The animals can’t stay in the cages forever—they need homes.

To keep up with the latest news and to volunteer, check the organization’s Facebook page.

update A story in the Joplin Globe does mention the Minnesota rescue. However, it still doesn’t make sense. No legitimate rescue would come into a disaster area and just remove animals. I still believe this is more rumor than fact.

As you can see if you’re reading this, the move to a new hosting company went very well. I’m already exceptionally pleased with Linode, not the least of which the dashboard the company provides makes maintaining the site so much easier.

The only real challenges I faced were setting up the email system, and porting my Just Shelley web site; the former is just plain cumbersome, and the latter did not like the move to a PHP 5.3 environment. After the move I discovered that Drupal 7 is PHP 5.3 friendly, Drupal 6 is not. There is something in Just Shelley that triggered problems, though luckily the other sites ported without any problems.

So, I’ve upgrade Just Shelley to Drupal 7, as well as having installed a new Drupal 7 account, and I’m finally getting a chance to take the new version for a run. I can already see I have a lot of work to do. Yes, a lot of work.

In the meantime, we had a exciting day here in New Year’s Eve. We kept getting tornado warnings, and I spent most of the morning hovering around the downstairs interior bathroom.

Just around noon, the siren went off again and the news said a funnel was spotted over Webster Groves or Shrewsbury. I looked outside, and the winds had suddenly reversed direction. There was a rushing sound, but not exceptionally loud. A few minutes later, the winds reversed back and things started calming down.

We didn’t get hit but the F3 tornado did a major amount of damage a couple of miles away. I don’t know if a tornado that far away could impact on wind in our area, or if there was another funnel cloud forming over us that didn’t form into a full tornado. Regardless, we lucked out. So did the people in Sunset Hills, because for the amount of damage done—and it is significant— folks only suffered minor injuries. Unfortunately, there were folks in other parts of the state not as lucky.

I haven’t been to my favorite walking place, since it’s on the other side of the damage path and I don’t want to add to the traffic. There have been a lot of gawkers, but the folks at Sunset Hills came up with the idea of borrowing firemen boots and taking up a collection for the tornado victims from the gawkers. Absolutely brilliant idea.

Even before Summer officially starts on Sunday, we’ve had heat alerts the last two days. Combined heat and humidity has led to effective temperatures of 105 degrees. We haven’t broken upper temperature records, but we have lower temperatures in the evening.

As these two Grévy’s zebras demonstrate, the only way to handle weather like this is to stay in the shade, or in air conditioning. I’ve had to turn my air conditioning up to 80 degrees, just to keep it from running 24 hours a day.

Not sure if the sudden heat wave is an indicator of a bad summer or not. From what the climatologists have said, it looks like we will have an unusually warm summer. Move over, zebras. 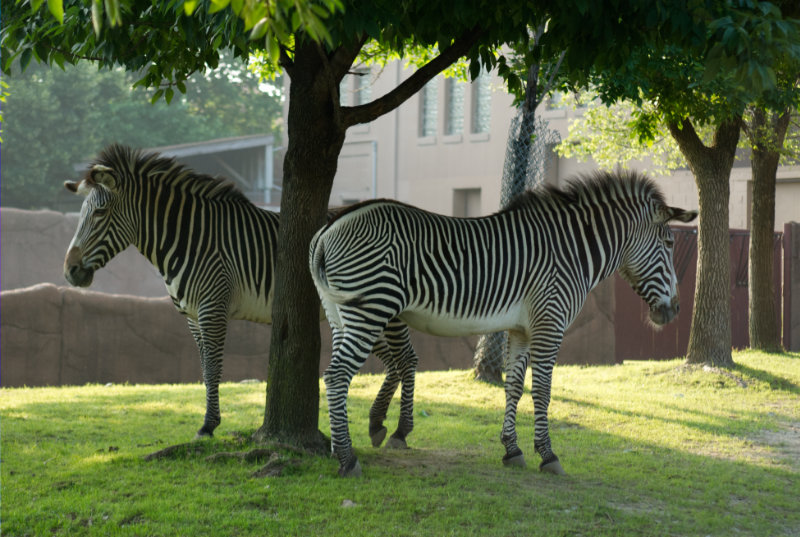