I enjoy posting photographs to the weblog, and usually accompany them with a story or a short and appropriate note. A couple of months ago I started something new — posting photos accompanied by poems that complemented the ‘story’ I wanted to tell with the photo. Explaining my new approach, I wrote:

What I found over time, though, is that it is uncommonly difficult to find a poem online using the ‘traditional’ search techniques — so much of poetry is based on imagery and metaphor, and metaphors are the ultimate destroyer of search engines. True Google busters.

For instance, take a look at the following photograph: 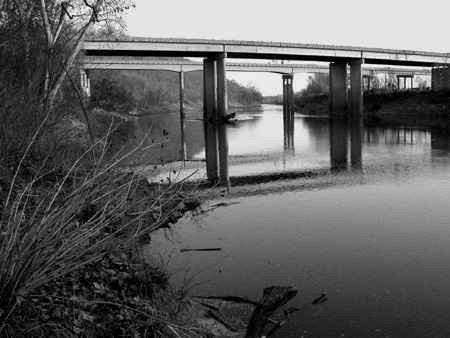 This photo shows a bridge, a river, and some vegetation, such as weeds, grasses, and trees. Now, I can search for poetry related to bridges, river, and trees and find some interesting results, but none of them matches what I see.

The photo shows a bridge, a river, and bushes, but what I see is change in my life, with the bridge being the path I must take, while the river is the path I want to take. In the photo, the bridge is more substantial than the river, but I see it reflected in the water in wavy lines, making it less real than the seemingly solid, glassy surface of the water. This dichotomy of images and reality represents my internal struggle over the direction the change in my life will take.

Yes, all of that from one simple photo.

Now, try putting all of that into Google and see what you get. You get something like this. There’s a dream analysis in the results that’s rather interesting, but not the poem I’m looking for.

The bridge, as metaphor, can represent meeting a challenge, facing responsibility, leaving someone important, even death. It can also mean facing change in one’s life, and if I look through enough poems that have the word ‘bridge’ in them, I’m sure to find one that represents the complex concept I’m looking for. After a time. But what if I want to find a poem that focuses on a particular concept, but uses something else other than a bridge as metaphor? Other metaphors representing a change in life are the eagle, tree, a wave, and I’ve even seen cheese used as a metaphor for a resistance to change. (Here if you must.)

Do I then search for all metaphors for the concepts I’m seeking, and then search for these metaphors among the poems? I wanted an opportunity to get exposed to new poetry, but even the most ardent poetry lover would weary of this over a time.

No matter how sophisticated the search engine, even our personal pet Google, the success of the queries break down whenever you move beyond searches for specific facts. When you look for something more complex, such as a concept, the most you can do is input all of the words that best represent the concept, and then start the long, arduous refining process.

During my search for poetry I tried this, and then varied the results by focusing on a specific artist and then looking for a poem among their other works. The effort became frustrating at times because I couldn’t find what I was looking for and the poems would run together into this mess o’ words. At that point, I would sell the search for artistic truth short and resort to ‘bridge’, ‘river’, and ‘trees’; giving into the inevitable limitations of the traditional hierarchically structured, keyword-based discovery that is the existing web.

With poetry, the traditional web fails. Even with Google. Even the Google of the future.

Of course, not all poems incorporate imagery, or use metaphors; however, there are underlying concepts incorporated into the poem, assumptions and history and interpretations that blow holes in the search engine bots as sure as a shotgon blows holes in the wily fox caught in the hen house. For instance, take the following poem:

Mary Tyler Moore
moved out today.
A big orange truck
came and took her away.

So what does it mean? Exactly what it says: a neighbor who looks remarkably like Mary Tyler Moore moved out today, and a moving company that uses large orange painted trucks moved her. Now, if someone wants a poem about Mary Tyler Moore, or a big orange moving truck, why here I am.

What I wrote in the weblog is available here, at the weblog. If I were to stop generating an RSS file for this weblog tomorrow, the information would still exist. You would just have to visit here, rather than use your aggregator.

If someone was looking for weblogs that post on specific topics, again the information is here. And there are web bots looking for certain topics already, such as references to Ashcroft, or Iraq.

Same with FOAF — anything I’m willing to expose in a FOAF file is already exposed. Want to know if Mark Pilgrim knows me, and I know him? Easy, search on our names.

The web is positively dripping with facts, and there’s no better tool to find these facts than Google and the other search engines. We don’t necessarily need the semantic web to uncover the facts, though it can help. No, we really need the semantic web to uncover the complex concepts, the information that can only be found when many pieces are pulled together in a meaningful way. To discover the conversations. The subtle rumor and innuendo. The play on words and the analogies.

The odd thing about poetry and the web is that as much as poetry isn’t a fit for the traditional web, it’s an ideal fit for the semantic web. Consider the dictionary definition of semantics — not the one given for artificial intelligence and programming, but the one given for linguistics. Semantics is the study of the meaning of language. Who pursues meaning in language more diligently, than the poet?

What’s been missing from the effort on RDF and the semantic web is the poets. On the committees and in the interest groups we have the mathematician, the logician, the computational linguist, the semantician, the artificial intelligence specialist, and the computer engineer. But we don’t have the the poet, and that’s a pity.

After all, who else through history has been more focued on meaning than the poet? Except perhaps the priest or the philosopher, and the former is more worried about souls while the latter spreads their interests too thinly.

Next: The Technician Sleeps while the Poet Speaks

The light and sound show hit with a fury yesterday, but not without exacting payment on its way.

Several people were killed by tornadoes in Kansas and Missouri and it looks like the town of Pierce City was pretty much leveled.

The storms had lost a lot of their energy by the time they hit us, but the sight was one I had never seen before, not having lived on the coasts. I’ve been through blizzards, floods, ice storms, wind storms that have leveled forests, and Nor’easters in Boston, but nothing like the continuous explosion of lightning and thunder last night. The sky wasn’t just lit up, it was blazing white at times.

I feel guilt at appreciating the incredible beauty of the same storm that just killed people. But it was beautiful. It took my breath away.

It’s just the start of the season. I suppose I’ll get used to the storms, but I don’t think I’ll ever stop being amazed at them. Or respectful.

I am in the midst of semantics, poetry, and RDF but I did want to take a moment to add my own comment on a new linguistic nosh currently being nibbled in the neighborhood. The nosh in question is a new book by William Hannas titled “The Writing on the Wall: How Asian Orthography Curbs Creativity”, referenced in a NY Times article.

According to Language Hat, the first to reference it, the author of the book, …claims that Asian science has suffered because the main Asian languages are written in “character-based rather than alphabetic” systems. According to the Times:

Mr. Hannas’s logic goes like this: because East Asian writing systems lack the abstract features of alphabets, they hamper the kind of analytical and abstract thought necessary for scientific creativity.

Stavros, currently living in South Korea and studying linguistics, reacted in a manner both swift and sure:

Roughly translated: Mr. William Hannas, with all due respect to your abilities and experience, but I would like to suggest that you stuff your head up your bum. Idiomatically: Fuck you.

Jonathon has also weighed in on this topic, specifically character association with sound, with:

In other words, as far as Japanese is concerned, the assertion that the language is based on characters corresponding to a syllable of sound is utter nonsense. Unless you’re referring to five year olds—but then there aren’t too many five year olds of any nationality winning Nobel prizes.

But he also added:

Roughly translated: With all due respect Mr. Hannas, but I beg leave to dispute your assertions and suggest that you take this banana and insert it into your rectum. Idiomatically: Fuck you.

I don’t have the expertise these webloggers have to contribute much to these excellent and appreciated discussions on linguistics, but even I, as someone with little exposure to this field, have a difficult time understanding why a people’s use of characters rather than an alphabet for writing would interfere with their scientific achievements. All I know is how much I appreciate the beauty of the characters, but I imagine that makes me provincial in the eyes of a learned man such as Mr. Hannas.

So I’ll add my own contribution to the response:

Roughly and idiomatically translated: What they said. (Thanks to Aquarionics for linguistic help.)

Of course, once I wrote this, I thought of Jonathon’s previous writing on Linguistic Imperialism and the impact that political correctness is having on what we say.

Well, back to the poetry and the RDF and the next essay, which I’ll release later tonight but must take my afternoon walk. In the meantime, while trying to look something up related to this topic, indirectly, I found a website that might be of interest: Omniglot.

Archived with comments at the Wayback Machine