Actually, it felt rather good to write that last posting, though I know I’ll piss people off. Probably people I care about. But then I ask myself, why do I care about them if my being honest would piss them off?

I went to the Red Cross orientation earlier today, following directions given at Mapquest. I took Hayden to 64 to South Lieberman. And I drove and drove and drove. Just when I decided I must have gone the wrong way, I realized I recognized where I was at — I had come full circle, home.

However, I got a chance to see some huge mansions, and I also got my first chance to flip the bird to a driver today. I followed a large truck in the right hand lane when all of a sudden I noticed it was a turn only lane. I flipped on my light to get over and looked for an opening. The guy behind me LEANED into his horn, without a break.

So I flipped him the bird.

There goes my driver good conduct metal. Plunk, hear that sucker being dropped into the trash.

Yes. That felt good, too. And I wish I could blame this act, and the last posting on Evil Twin — but they were both all me. All mine.

I’ve been talking at group sites this morning: at Blogs Unlimited and over at the threads list. Some of the communications were good, some not so good. I have a great deal of empathy with chopped liver at the moment.

It’s very discouraging to be invisible, did you know that?

I also want to thank the folks interested in poetry/writing/linguistics for taking time to help me get a better grasp of the ‘business’ for the RDF/Poetry essays. I am hard at work on next entry (yo, anyone excited about this), but to be honest, just not feeling great today. And I’m going in for Red Cross volunteer disaster training later today, too. (See, something the little woman can do.)

There’s really only one photo that appealed to me from yesterday’s storm (who knows why — it’s a bizarre little photo). No poem, though. Couldn’t find one that matched: 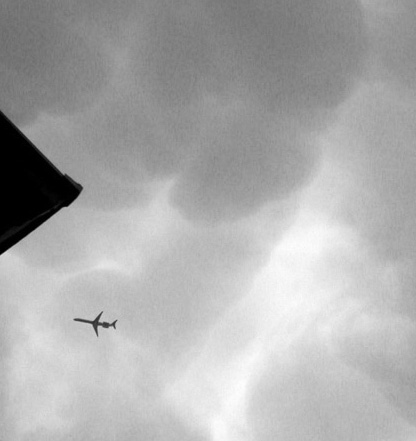