I ended up stopping for the night in Limon, Colorado, at this little oasis of hotels/eateries/gas stations. The motel was a bit pricey, but as an added bonus – high speed internet! In the middle of Colorado cattle country.

I have found that I’ve finally reached a saturation point in this particular route. All the states between Missouri and California are very nice, lovely, friendly and interesting – but after this trip, I don’t want to see any of them again. Well, at least for a good long while.

Uneventful trip other than a car in front of me blowing a tire out. They managed it like a pro. Hope that never happens to me. I did make excellent time, but today’s miles are catching up tonight. You all would recognize the feeling – tired and disoriented. I hate that feeling.

The decision for tomorrow is whether to go up I15 to catch I80 in Salt Lake City, or to take I25 and catch it in Cheyenne. This is the shorter route, but I haven’t been in I15 for ages, and it’s very pretty. Rocky Mountains.

Catching up on weblog reading, I can see some disagreement that the Echo project is even occurring. This isn’t surprising, but it shouldn’t be happening. Echo is open to everyone, and all input is welcome. People can involve themselves if they want, or ignore if they don’t. This is the weblogging way to run a project of this nature.

I was going to make several detailed comments on this, but they would serve no positive purpose. Instead, I’ll continue my support of Echo, help when I can, and focus on photos and other writing.

See you in a couple of days in San Francisco.

Has someone started this already? If so, can you paste a link to effort in my comments?

I spent the afternoon and early evening at the Busch Wilderness Center, exploring the 35 lakes contained within the area. For an out-of-water nymph like myself, just drifting between the lakes — small and large — was like coming home. What was especially delightful, wonderful, and surprising is that each lake has it’s own personality — no two were alike. 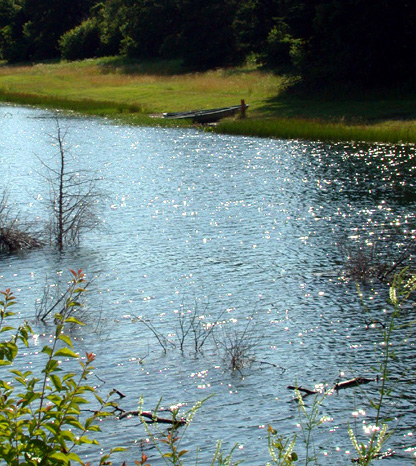 Most of the lakes weren’t much more than larger ponds, though Lake 33 was quite large, with it’s own overflow area, associated stream and wetland. Big enough for several boats, and the Wilderness Center rents boats for fishermen — fishing is quite popular, as you can imagine.

Some of the lakes were pure catch and release, while others you could keep what you caught up to a limit. No bass under 18 inches, I remember that one, but what the heck are ‘crappies’? Regardless of the rules, the fishermen I saw seemed to be happy just to be out, in the sun, line in the water, eyes half shut looking at the far shore.

But what the heck are crappies? 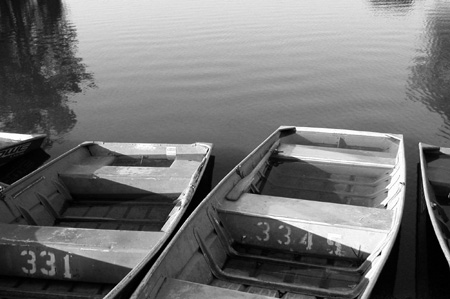 There were so few people that many of the lakes I visited had no one else around and I could sit by the water, watching the birds and the fish jumping at the dragon flies overhead. The weather was warm but not hot, and though there was some humidity I think I’ve adapted to it, because I’m finding that I enjoy it.

It’s a serene feeling, walking by the lake, warm humid air wrapping around you, sweat on your upper lip, and trickling down the small of your back — holding the cool breezes blowing in across the water. 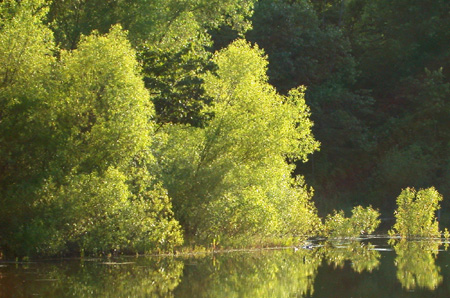 I was surprised at the plant life at the Center, and I’ve seen enough Missouri Green to know what I should have expected. I expected the bushes and trees and grasses, but not the tiger lilies, yellow daisies, purple thistles, and pink primroses.

Still, the stars of this show were the lakes, bright sapphires among the green. 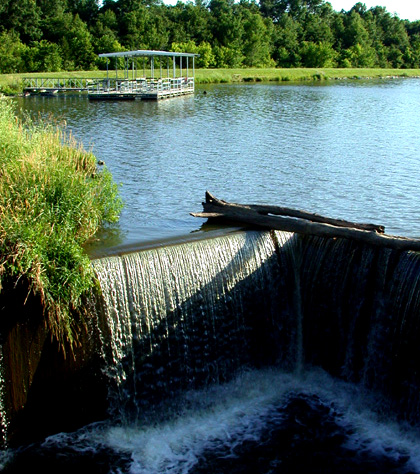 The road leading to all of the lakes is yet more crushed limestone, with some pretty significant pot holes. If the view didn’t slow you down, or the road didn’t do the trick, the baby rabbits that positively crawled all over the place would. I got to the point that I almost ran off the road, peering into the bushes on either side to see if a bunny was going to run in front of the car.

Can you imagine how bad you’d feel, running over a baby bunny? Well, I can. I got so paranoid at one point, I stopped for a brown leaf in the road. 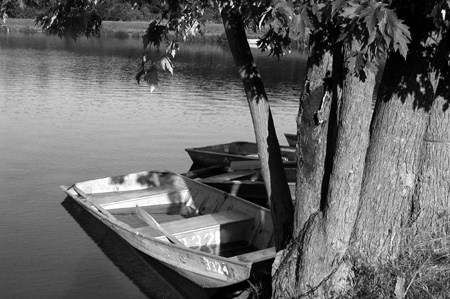 I didn’t walk through the trails too much, because they were so badly overgrown. Not being afraid to walk during the summer is one thing — walking into a thicket of tics is another. My mama raised no fool.

But there was an honest to goodness stand of pines, I had to explore. It was so unusual to see the tall evergreen tress, with little of the traditional Missouri undergrowth. I’ve become so used to the persistent, all over pervasive green.

But, back to the water. Water water, everywhere.

Me and my love of water. I can’t go near water without using all of my ‘film’ — space on my digital chip — on pictures of the water, near the water, boats on the water, and so on. Cute bunnies and pretty flowers may come and go, but there’s always more room for yet another reflection, or another boat. 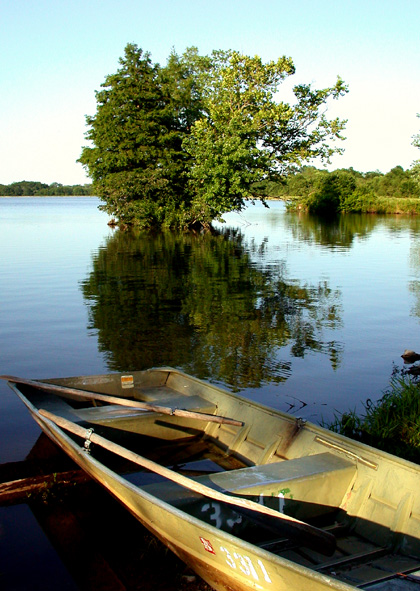 Joe Shelby, in the comments associated with my last posting made a good point about “Echo” as name of this weblogging initiative:

Echo is already a name for a product, a Java web application framework, that just released its 1.0 earlier this month, and very nicely under the LGPL license. By choosing “Echo”, the Wiki participants have effectively hijacked that name and may potentially destroy a product from a company doing TheRightThing ™, before that product even gets off the ground.

I posted a note at the wiki about this. I asked that the members form a consensus that they’re willing to use a name that could conflict with another newly released technology. This did start another discussion page.

Wikis are geared to fast, fast, fast. You have to hit the ground running, and be ready to move. Too much for this SysAdmin wore out from getting the Burningbird Network Co-op going (having fun, though). However, in this particular instance, I can also see the power of a wiki.

To me, what brings this all together is combining the technology: wiki to do the actual collaborative work; and weblog to summarize and involve others, to highlight specific points, and make specific persistent comments.

I’m getting a bit burned out on tech at the moment, and need to go back to literature, writing, funnies, life, politics, and photos – but I did want to take a moment to say that I think the wiki combined with weblog approach is very sexy.

Technically speaking. No worries, I’m not that far gone.

Reply from other project:

I do greatly appreciate you asking us before using the name, and
apologize for not having a positive answer. I’d request that you not
name your project Echo. I think the possibility of confusion is too
high, given that both projects are frameworks for building Web-based
applications. I realize that finding a name is very difficult to do (it
took what seemed like forever to settle upon “Echo” in our case).

I am not a lawyer, but I believe that I am required to inform you that
NextApp has a pending trademark registration on the term “Echo” in the
application of “A computer software framework/library used by software
developers for the creation of Internet-and Web-based applications.” It
is my understanding that I am required to state such information in
these circumstances in order to have our trademark be
considered valid, as trademarks must be actively defended. I apologize
again for even mentioning this as a response to your friendly request,
and only state this information because I believe I’m legally obligated
to do so.

I would say that Joe Shelby should take a bow for a good call on this one.