The ActivityPub WordPress plug-in is working beautifully. Not only can people follow me on Mastodon, I can now follow them back using the complementary Friends plugin.

This plugin isn’t specific for ActivityPub. It allows you to subscribe to friend’s posts, ala Google Reader, and creates a personal Friends page to read most recent posts. ActivityPub integrates with this so you can follow Fediverse accounts such as those on Mastodon. The header screenshot shows the Friends page, which is a nice, clean feed reader page. But it’s personal. The following image shows what happens if someone else accesses the page. 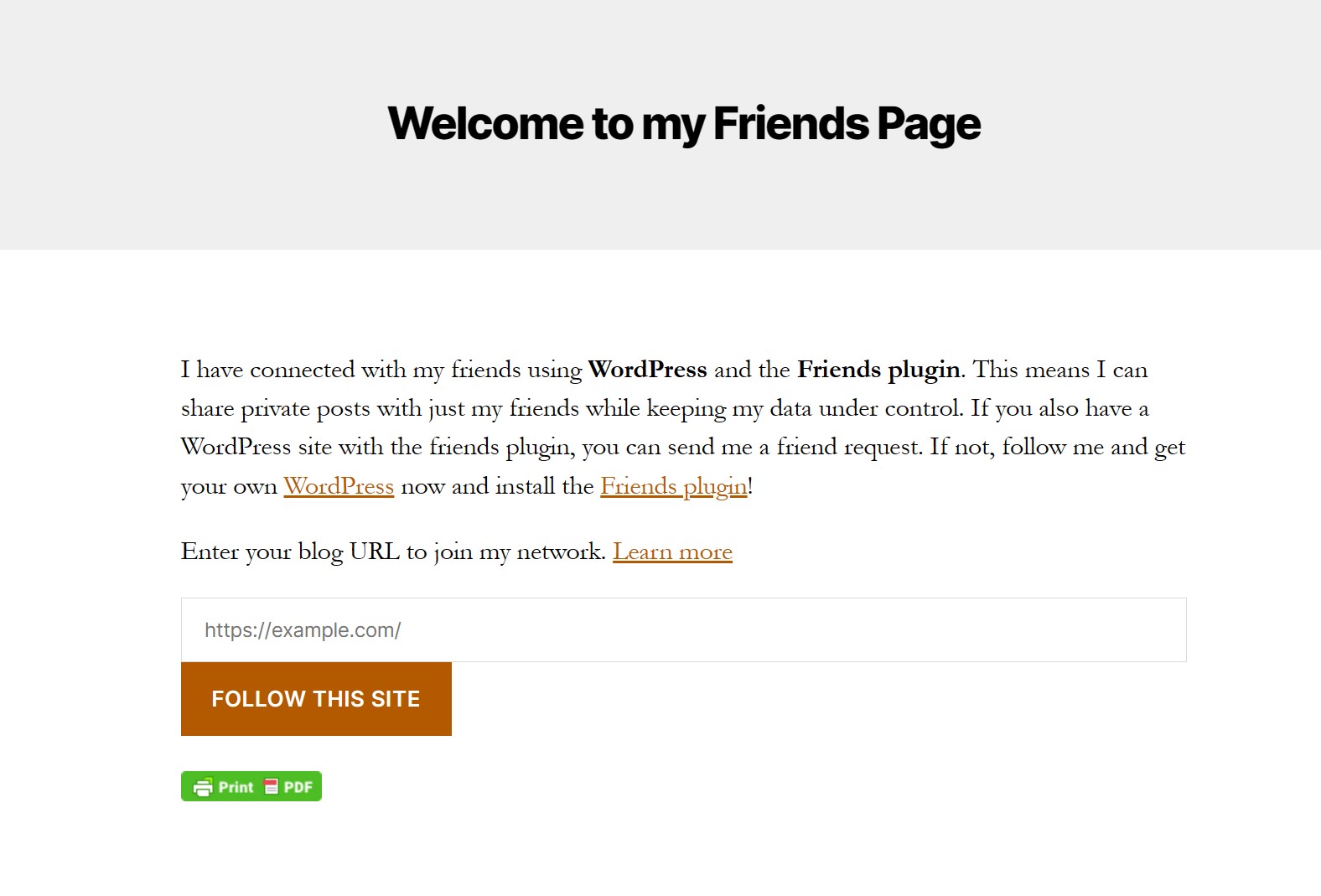 The integration isn’t seamless. Replies on Mastodon to a post show up as comments, but unless I enable comments for the post, you can’t respond to the comment. And if you do, it doesn’t show back up as a reply on Mastodon. In addition, I can star a Mastodon post in my Friends page here at Burningbird, but it doesn’t reflect back to Mastodon.

Still, the integration is impressive, and usable right now. I suspect it will only get better over time.

One change I did make was to limit my posts to a 400 character excerpt. It’s not usual for me to push out 2000 or more words in a post. I don’t think this is social media friendly. I also limit the content to non-HTML text, only. Don’t need to send out something that could cause issues in an ActivityPub application.

The 400 character excerpt didn’t work out well, because paragraph markings were removed. So now I’m trying Title and Link. I may see if WordPress excerpt will work with crossposting to Mastodon.

The Supreme Court decided in June, 2015 that the fundamental right to marry is guaranteed to same-sex couples. The decision was Obergefell v Hodges, and the was one of the most definitive for civil rights in the last century.

A few short years later, this decision, like that for Roe v. Wade, which guaranteed rights to healthcare, is under threat with a Supreme Court more interested in forcing a narrow, restrictive ideology than the law. In response Congress just passed the Respect for Marriage Act. Though the protections aren’t as comprehensive as the Obergefell decision, at a minimum this Act ensures that same-sex marriages would be recognized by both federal and state government, though it could not force states to issue marriage certificates to same-sex couples.

Perhaps at a minimum, it will provide a warning to the Supreme Court that no, they won’t be allowed to turn back the clock, and they’ll leave Obergefell alone.

Serendipitously, this week while I was recovering old weblog posts from the Wayback Machine, I recovered one titled “No other word works but great.” I wrote it February 18, 2004 and it was about that brief and shining time when Gavin Newsome and the city of San Francisco, in an act of civil defiance, issued marriage certificates for same-sex couples.

As I wrote at the time:

This news coming out of San Francisco, is the first news I’ve heard in a month, over a month, of the triumph of the human spirit, the fire of those who will not accept the dictates of a hypocritical society, and the goodness of people reaching out to other people.

Enjoy this flashback, and think on how far we’ve come, and what we can’t lose.

The follow up longer essay I promised, also recovered from the Wayback Machine: For those who inhabit the empty spaces of the coloring book.

The social media upheaval continues but things are starting to quiet down a bit. Oh you can’t tell this from the media, which is full of stories leading with “Elon Musk says…”, but that’s primarily because the media hasn’t figured out how to wean itself off Twitter, yet.

I quit Twitter the day that Musk reactivated the Project Veritas account. Even a lie would be ashamed to be associated with Project Veritas. Not so Twitter and Musk.

I didn’t delete my two Twitter accounts, because bots and trolls can snap up a previously existing username in 30 days once deleted. And I didn’t deactivate them because deactivated accounts are deleted in 30 days. What I did was post a last note where to find me on Mastodon, set both to private, and then walked away. I won’t even look at Twitter now, because doing so triggers ad impressions and that gives Musk money. I don’t plan on ever giving that guy money, and I’m severely curtailing the amount of attention I’ve giving him.

I’ll miss the folks that stubbornly stay on Twitter, but they’ve made their choice, I’ve made mine, and someday maybe they’ll wise up.

In the meantime, my move to Mastodon has had ups and downs, but has ended up on an up. My choice of kickoff point on mastodon.social was a good one (@burningbird@mastodon.social) because the creator of Mastodon (Eugen Rochko), who is also the administrator of mastodon.social, is quite welcoming of new Twitter folks. No nonsense about content warnings.

Well, to hell with that server and any server administered by hypersensitive admins letting the power go to their heads. And to hell with other people’s CW demands.

Now, I use content warnings sparingly—primarily for larger posts or posts that contain what I deem to be sensitive material. If people don’t like it, they don’t have to follow me.

I did add some Mastodon stuff to my weblog. You’ll see a “post to Mastodon button” at the end of a story. And you’ll see my latest Mastodon entries in the footer. The latter comes from the RSS feed appended to each account in Mastodon (mine: https://mastodon.social/@burningbird.rss).

The really nice thing about Mastodon having an RSS feed is you can follow a person’s Mastodon entries in the same RSS reader you use for weblogs. Pretty soon, we’ll no longer be able to tell the difference between a weblog and a micro-blog.

The post button is interesting (how-to). Unlike one centralized location for Twitter and Facebook, each person is on a specific Mastodon server, so you have to specify what server you’re on in the ‘toot this’ web page that opens. This is the nature of the federated beast. It’s no different than if you have a weblog or web page and you have to provide its unique URL when asked for it.

I also bookmarked the Toot dialog and use it when I post a link to Mastodon. I found using the dialog helps to trigger the link excerpt, while posting a link directly in Mastodon usually leaves the link as just a link.

The downside to using the Toot dialog is it logs me out of Mastodon, every time. This is a PITA when you’re using two-factor authentication.

My plan is to create my own Mastodon server, but I’m working through how I want to do so. I can spin up another Linode for it, or try putting in on this server. There are Mastodon hosting sites that are attractive, if for no other reason than you have to have SMTP access (for email), and it will be a cold day in hell before I try to run an SMTP service again. But I’m leaning towards spinning up another Linode and then using a 3rd party SMTP server such as Gmail.

The great thing about this federated universe is when I do create my own Mastodon instance, I can move all my follows/followers to it. I don’t believe I can move my posts to it, but really I don’t care about my older Mastodon posts. In fact, I’ve set my account up to delete them automatically after two weeks. Why burden mastodon.social with my old crap? I might be restoring my old weblog posts, but I don’t care about old Twitter/Facebook/Mastodon postings. These are just social media blurbs.

I do care about the people, so I don’t want to lose those connections.

When I do setup a Mastodon instance, I’ll spin you a tale of my trials and tribulations setting up a Ruby on Rails project. The one downside to Mastodon is it’s Ruby on Rails, an environment I have no experience with. I may also install something like PixelFed, which at least is good, honest PHP and Node.