I don’t know about anyone else, but I could use a small change of subject about now. I’m in a green mood.

Yesterday, while the weather was still sunny, I went for a walk at Powder Valley. Each time I go there, it seems the woods get greener and greener, and the depths are so dark, they look black. 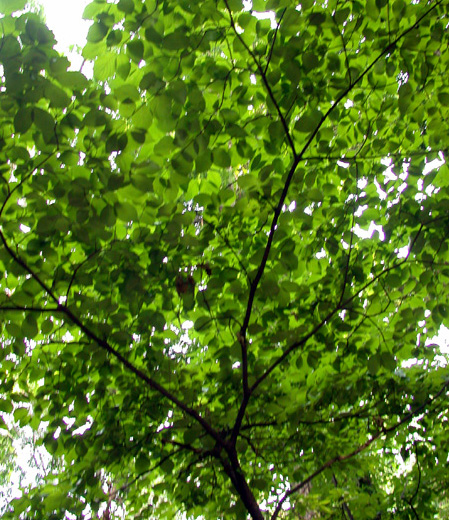 Walking along I heard a rustle in the trees right next to the trail and turned around coming face to face with a white-tailed deer. She looked at me, leaf still in her mouth and I looked at her, not daring to move. After a minute of eye to eye contact, she stamped her foot in warning and took off, white tail high in alarm. What a beauty. 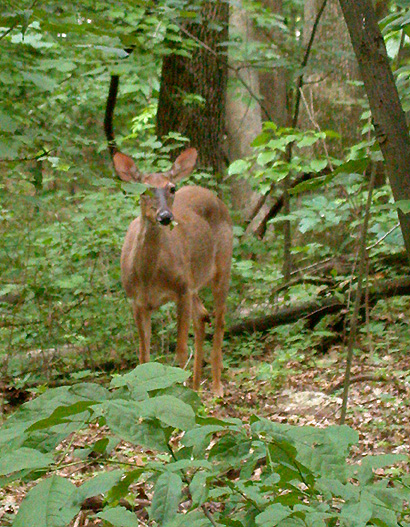 Another bit of green came in today’s mail – a letter of acceptance from Evergreen State College for this Fall quarter. Well, now. Doesn’t this change things.

New paths have opened in front of me and I’m doing a dance of indecision at the fork. It vaguely resembles the Frug. 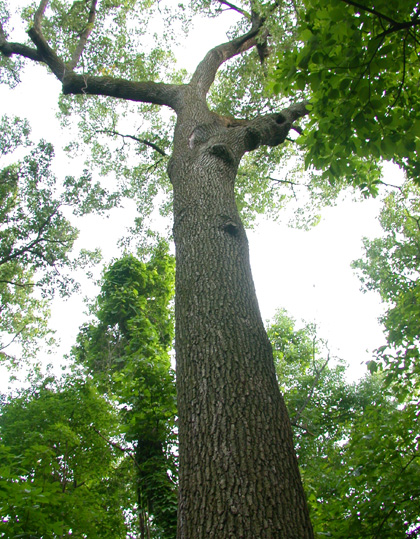 Years ago, long before the web, I was involved with a Usenet group surrounding the POSC data effort. I remember getting into a conversation with one of the folks about the inevitability of disagreements. His belief was that people naturally were cooperative and will argue only under extreme circumstances. I disagreed and stated that, in my opinion, it’s more natural for people to be competitive. “If there are two people in a room,” I wrote. “They would squabble with each other, until a third enters, at which point the first two would join forces and go after the new person.” Years later, what I’ve found is that neither of us was completely accurate because humanity is both cooperative and competitive; we need both of these facets in order to be truly effective. One of my biggest criticisms of the ongoing social software efforts is that there seems to be an assumption that Man is inherently a cooperative, social animal. I agree that we are social — even the most anti-social of us needs human company in some aspect. It’s also true that we can be cooperative if we look at all we have built and accomplished by working together. However, we are also argumentative, opinionated, passionate, angry, and defensive; equally capable of acts of nobility and cruelty. Social software, to be truly successful, must embrace all aspects of being human — the good and bad — if it is to succeed. This leads me back to the first part of this essay, and the discussion on flamewars, comments, and censorship.

Earlier this week, I wrote what I will admit was a irritated and snippy comment within a weblog posting at Sam Ruby’s. Others also wrote comments that some might consider snippy or flammable. Since the topic was RSS, this isn’t that unusual because, as Sam wrote …mention RSS and RDF in the same sentence, and all the same people come out of the woodwork, like moths to a flame. Business as usual…until the strike-through font started showing up with some of the words. I noticed that several words in one comment had lines drawn through them and assumed that writer did this as a way of making a point in his comment. It wasn’t until the strike-throughs started appearing in my comments that I began to realize that this was being done by Sam rather than the author of the comment. He was trying something new: all writing in all comments that Sam deemed ‘flamebait’ was going to be designated or marked in such a way to signify his disapproval, starting with a strike-through originally, and now showing as a different font. I was appalled. I have never had one of my comments edited in any way. To see this happen to my writing, without my permission, was, frankly, a shock. Now, instead of my words just sitting on the page, not given any attention, which they really didn’t deserve, they’re marked and highlighted, branded with a scarlet or blue striped font of shame. , the annotation says. What was worse is that the lines also started appearing in another comment I wrote, one that did not contain material that I would consider flamebait. I wrote:

What was the biggest disappointment was when Sam Ruby edited my comments. I can’t think of anything worse than to edit other’s comments. I can see deleting abusive comments in weblogs, or editing them on the request of the person who wrote them, or banning someone who’s abusive — but not editing comments without permission. I’d rather all the words be deleted.

Sam wrote his own posting on this issue, as well as responding to my comments, saying:

I am trying to annotate things as something that I do not endorse or approve of on my website.

What followed was an intense discussion, in comments and other weblogs about the property rights of the weblog owner versus the rights of the original comment writer, the necessity of controlling flamewars in comments and whether an action of this nature was acceptable. James Snell wrote:

Compare this Weblog to a painting. I, as the owner of the blog am the painter. Whenever I add a stroke to the canvas (in the form of a blog entry), I invite others to add their own strokes (in the form of comments). But, as the painter, I reserve the right to edit, annotate or remove those strokes whenever and for whatever reason I see fit, because, afterall, it’s still my painting.

I had always considered my contribution to my weblog was the writing of the original essays, the photography and the occasional code. It’s then up to my readers if they want to say anything or not, but I’ve never considered their comments as an integral part of the writing. Yet, I have seen instances where comments have resulted in completely different interpretations of the original writing, so I can understand this point of view, but I still can’t condone an author annotating or editing another’s writing. Not all people agreed with me. Most people felt that Sam’s initial effort was inappropriate because there was no warning, but rather liked the idea of managing acrimonious discussions in comments by selective editing. As Tim Appnel wrote:

I didn’t even think twice about the practice Sam started–I actually thought it was a good idea. Sam has my utmost respect and I trust his judgement when he marks something as flamebait. I will take that into consideration next time I comment.

Therein lies what I see is the danger in this practice: that one person is altering how others view the words rather than let them make a determination for themselves. Yes, even with derogatory material. What one person could consider a flame, others could consider a passionate disagreement. Though this is not as critical an issue when associated with a technical specification such as RSS, what of topics such as the war in Iraq? The Patriot Act? People such as the USA’s Bush or Israel’s Sharon and Australia’s Howard? With subjects such as these, where it’s virtually impossible for the participants to remain dispassionate, one could see the weblog owner’s viewpoint clearly, even with the best of intentions to remain unbiased, just by following the ‘annotation’ within the comments. Others shared my opinion and were equally disturbed by this new comment management practice. Pax Norona wrote:

Fair discussion requires that remarks be unedited except as requested by the writer. Many years ago, when I was in high school, I wrote a letter about our school newspaper putting a front page story honoring our losing football coach. In the story, the coach was quoted as putting the blame on his players. I suggested that a man of integrity should shoulder the blame himself. My letter was not printed in the next issue, but a rebuttal was posted — naming me, pulling quotes out of context, and accusing me of saying things that I did not. My parents were never ones to stand up to authority, but that experience solidified certain principles. Foremost: Rebuttal must appear in the context of the message. Sam Ruby’s marking of Burningbird’s remarks as “flamebait” violates this principle. He has, himself, indulged in flaming. Furthermore, he’s chickened out. Being without words for a reply, Sam merely casts red paint on Burningbird. If he does not like the remarks, he should, as Burningbird suggests, delete the comments.

Martin Wisse was more ambivalent, writing, _I don’t think Sam Ruby was wrong in taking responsibility for the comments on his blog, but I think the way he went about it was a bit stupid._ Martin doesn’t care for Sam’s efforts, but also doesn’t see them as censorship because he doesn’t see speech being denied. However, censorship isn’t just the restriction of speech, it’s also practiced when speech is mocked or derided. By mocking speech, we seek to censor by lessening the respect with which the words should be heard. A few, very few, thought the issue was much ado about nothing. Yet this issue isn’t much ado about nothing as much as it is symptomatic of an overall concern — how do we manage disagreement within a social software context? For instance, how do we manage disagreement within weblog comments, as compared to discussion groups, and even collaborative software? After all, we have laws and social custom controlling our interaction with each other physically. I can’t physically hit Sam because I’m mad at what he’s done, and he can’t physically restrain me because I wasn’t playing well with the other children. In some ways, that’s the point — we must have laws and custom to control physical interaction because of the very real damage we can do to each other when in close proximity. The damage we can inflict on this virtual world may hurt, but not permanently, and not enough to send each other to the hospital. If this were so, why, I’d be dead. Right now. In a comment in Sam’s original posting, he took me to task for my comment, and previously I would have apologized for the inappropriate words, but lately I’ve been finding myself less and less patient with the concept of adults chastising each other. Anger, and expressions of anger, are not childish, no matter how we try to reduce these basic and very real and natural human emotions. Anger can be very deep, very dark, motivating as well as destructive. Most of all, anger can be very adult. To treat it otherwise not only doesn’t defuse the situation, it can make it worse. Earlier I said that I both did and did not regret my original comment. I don’t regret that I raised, indirectly, an issue related to the topic but of a much broader scope that gave me deeper concern. However, a more appropriate response would have been for me to respond to the topic at Sam’s and then write a separate weblog post on the other issue. I did regret that the comment fanned the inevitable flamewars surrounding the topic of the post, and did so in someone else’s space. What I regretted more, though, is that I chastized another member for his behavior — a part of the comment that Sam did not mark out. Those were the truly offensive words. When I chastised the other person, when I suggested how they should change their interaction and behavior, we were no longer peers discussing a volatile subject — I had assumed a parental role, trying to force a child role on the other person. And, in some ways, Sam assumed a parental role when he chastised me. So now, in addition to the message of -Shame on you, Shelley-, attached to the writing, there’s now also a touch of -No cookies and milk for you young lady. And just wait until I talk to your mother when she gets home.- Coming up: The Tyranny of the Commons