I just wish I wasn’t so tired tonight because I’m inspired by what others have contributed recently.

For instance, Lynette finished her 26 Things Project, progress thereof giving me a great deal of enjoyment (look for the chameleon cat). qB also participated in the project – taking all the photos from a double-decker bus! I spent additional time tonight looking at other contributions and it was fascinating to see each individual’s interpretation of the topic words, such as ‘love’, ‘you’, ‘color’, and so on.

Maybe I can talk qB or Lynette into letting me put their efforts into a faux PhotoBlog.

Photos. Photography. And then there’s Jeff Ward’s self proclaimed theoretical wanking about photography, words, predicates, and propositions. Since this is a work in progress, I hope Jeff doesn’t mind me linking to him, but what he’s saying, the actual words, are reflective of some recent and quite intense discussions on the semantic web I’ve been reading, but from a completely different perspective.

Speaking of different perspective, earlier in the week, Maria quoted an article by Renana Brooks in The Nation, titled A Nation of Victims. According to Maria:

Brooks looks at the linguistic techniques Bush uses to achieve his political aims. As a rule, most people take issue with what they perceive to be his mangling of the language. But, as Brooks argues, there is a definite method to this madness, and that method is there to catch you inside a frame of helplessness.

She quotes the author:

Bush is a master at inducing learned helplessness in the electorate. He uses pessimistic language that creates fear and disables people from feeling they can solve their problems.

If you’ve read Burningbird for any length of time, you’ll remember that I’ve talked about learned helplessness before, but it wasn’t until I read this at Maria’s that I identified what I’ve been seeing among the people of this country. With learned helplessness, even if truth marches up and spits in your face, you’ve lost the ability to ’see’ it.

Speaking of wishing…I just wished I wasn’t so tired tonight so I could provide proper attribution and additonal commentary to all of these topics – but that will have to wait until tomorrow.

For now, ending with a photo of a tasty storm that rolled through earlier tonight. 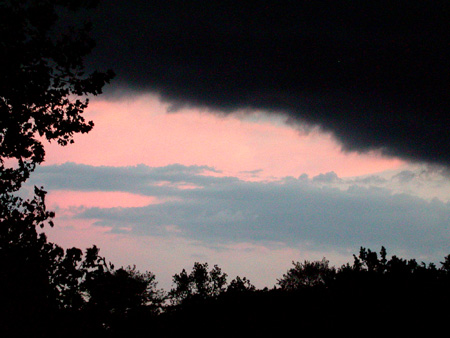 Six Apart has announced the preliminary release of TypePad, a hosted solution for those people partial to Movable Type. Prices look pretty decent, low enough to be competitive, but not so low that there’s thousands of weblogs on one server.

Among the features is HTML-free templating, moblogging, automated FOAF generation from the blogroll (hmmm – don’t agree with this one), as well as the ability to show what you’re reading and listening to. The best decision Six Apart made with TypePad was pointing the weblogger’s domain names at their weblogs. Depending on the web server used, this is a very doable thing, and I think other hosted solutions are going to have to look at this as an option.

One of the functionalities that TypePad has that Movable Type doesn’t is a ‘photoblog’, photography weblogging setup. I imagine this will interest quite a few folks who already have their own hosted MT sites. I liked the look and feel of many of the photoblogs I looked at, such as Joi Ito’s San Francisco photos, so I set out to re-create the look in a Movable Type weblog called MT Faux PhotoBlog. Once I figured out the templates, it was quite easy to create the album, and I may do this for other photo albums.

How does it work? The solution requires that the server have ImageMagick, and the ImageMagick Perl wrapper installed. Otherwise you’ll need to create your thumbnails yourself.

Categories are created for each photo, sans the photo extension. For instance, a photo such as tunnel.jpg would have a category called ‘tunnel’. When the photo is uploaded, it’s uploaded as a separate entry, and a thumbnail is created. When I create the thumbnails, I don’t constrain the image proportions, so that I can create square thumbnails. In the Faux PhotoBlog, I’m using thumbnails of 120 x 120px sizes.

To get the front page, I replaced the traditional MT entry listing with the following:

What this template code does is create the URL for the image by concatenating the category name, with the blog URL and photo thumbnail filename extension (jpg). Instead of category, you could also use entry title, but then this forces it into a title that might not be descriptive. Instead, I used entry title for the ALT tag for the image, and reserve category for the filename.

To force the images to line up and wrap without using an HTML table I created an img CSS class to use with the images that sets the image to inline display:

I also gave the images 5px of space around them on each side. All the images are given a border, in this case a solid grey one.

(If your browser doesn’t support display:inline, you can also surround each photo with a SPAN tag, as this forces the image inline. However, if you do this, make sure your outer DIV block doesn’t have left padding or margin, or you’ll get uneven wrapping.)

This takes care of the main page. For each individual page, to get the lined up thumbnails, I used the following:

I’m using the browser resize capability – resizing the thumbnails from 120 down to 50. However, that’s something you can change. It just seems to match the PhotoBlog look. Additionally, in this setup, I only list the most recent 20 photos, but you can change this, on the front page and in the sidebars.

You’ll need to rebuild all entries each time you add a new photo, otherwise it won’t show in the sidebar. Chances are, you’ll want to consider keeping your photo albums smaller, less than 100 photos.

TypePad’s photo album feature probably has a lot more features, but for those of us on MT, at least we can capture the look.

(Access the individual and main index templates, and stylesheet. )

Well, I left parts out, didn’t I? When you upload a photo, have MT create a new entry and use the embedded photo option. If you have the software installed, also have it create the thumbnail for you at the same time – making sure not to constrain the proportion, and make the thumbnail square.

In the entry, delete everything but the URL for the photo, converting it into an img instead of a hypertext link if you used a thumbnail when creating the entry.

Alternatively you can just create a fresh entry, and add the image yourself – but you’ll then have to provide a thumbnail. If you do, remember to name the thumbnail imagename-thumb. Don’t try and constrain the photo itself as a thumbnail using width and height in the img tag, unless the photo is square to begin with – browsers don’t do a great job of converting a big rectangular photo into an itty bitty square thumbnail.

Thanks to Al for correction to my earlier statement: MT will create thumbnails if you have either ImageMagick or NetPBM installed. Ask your ISP if you’re not sure.

And if you have problems, holler.