The summer heat and lack of rains lowered the Meramec to the point where I could scramble down its banks tonight and walk along the river bed. The hill leading down was steep and rough and a year ago I wouldn’t have tried it, but days of walking, always on the look out for a new angle for a photograph have increased my agility.

Among the rough stones small frogs, no bigger than a beetle or a dime, were hoping away from me as fast as they could, some jumping into the river to avoid me – becoming a real treat for the surprisingly large fish along the edge. I felt bad that my shadow was triggering their instinctive flight response, but I imagine that the known terror was less frightening than the unknown. Can’t fight instincts – animals react to threats either by running, or by turning and standing to fight. Flight or fight is the name of the game. 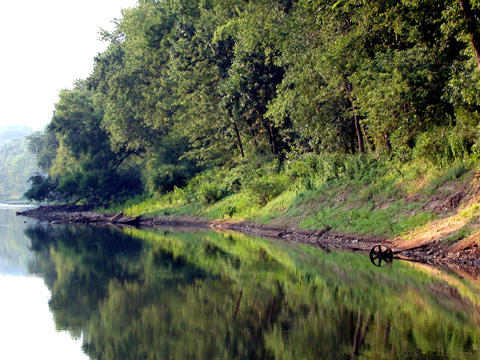 I tried to take a picture of one of the tiny frogs, but it didn’t come out well. No loss, though, because it was fascinating just to see them, to explore what would normally be under water. It’s experiences like this that make me so glad that my photography has forced me into situations that I would normally have avoided. What adventures I’ve had and what beauty I’ve seen because of this insane desire to find the perfect angle for the perfect shot.

I started taking photographs seriously in January 1991 when I purchased my first Nikon 8008, as an incentive to quit smoking. I’d smoked for years and had developed a cough that was getting progressively worse. When I woke up one morning and coughed so hard I spit up blood, we knew something was seriously wrong. After I had lung X-Rays, the doctor quietly told me that the results weren’t definitive, but there was some evidence in the film that could indicate emphysema, especially in light with the other symptoms. I would need to have more detailed tests, but one thing was certain – I would have to quit smoking.

The nicotine patch was fairly new then and she prescribed a series of them for me, but I knew that I was going to have to fight the addiction on my own if I was going to be successful at quitting where I hadn’t been before. To give myself something to occupy my time, and hands, I bought the camera.

The doctor warned me that my cough wouldn’t go away quickly, and regardless of what they found, it would probably be years before I’d stop having problems. Still, I managed to quick smoking with only minimal damage to those nearest and dearest to me. In addition to the photography, I also started walking and then hiking to help deal with the to-be-expected weight gain that comes with giving up cigarettes.

Odd thing is, my condition improved drastically. Within three days, I was no longer coughing hard enough to see stars. Within a month I could breath in and not fall down on the ground coughing. By the summer, I was going for days, weeks even, without coughing once, especially as we cleaned all traces of the cigarette smoke from the house. The doctor was more than pleased – she was stunned by the rapid improvement. And puzzled. The additional tests did show some lung deterioration, but not enough to generate the original coughing. This paired with my rapid recovery ended up being a bit of a medical mystery.

More tests and discussions with other doctors and the final finding was that I had developed a severe allergic reaction to cigarette smoke. Allergic to cigarettes and smoking – can you believe it? Consider being allergic to ragweed or cat dander and then waking up every morning and breathing from a bag full of it. That’s what I was doing.

I traded all of that for a few extra pounds, and a love of hiking and photography I have to this day. 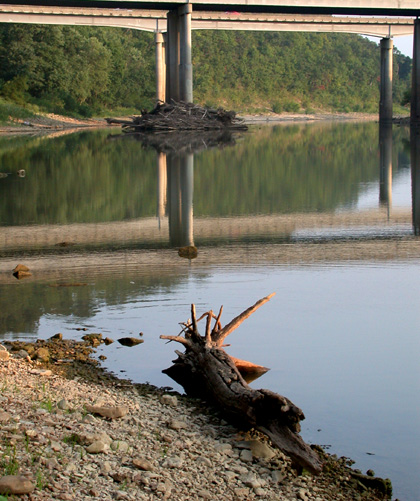 Returning to the topic of this essay, this fight or flight. Earlier the frogs reacted in fright and escaped me only to become dinner; but I could have just as easily been a predator bird and the fish in the river replete except the odds weren’t in the tiny frogs favor. Earlier still, I fought for life, as we all do when faced with a challenge to our seeming immortality, but in my case the odds were in my favor. In both situations, instinct took over, guiding us into fight or flight depending on the challenge and the prize. The rest of the time, though, we’re on our own.

I have never successfully figured out when I should fight the good fight and when I should walk away. One time I’ll stay to fight to the bitter end, all dignity and umbrage, only to have others come up to me afterwards and ask me what was I thinking? Why the hell didn’t I just walk away? Why did I rise to the bait?

Other times I beat what I consider to be a dignified retreat from the battles only to be faced with scorn from those who see my walking away to be nothing more than throwing my hands up in the air, and giving up. 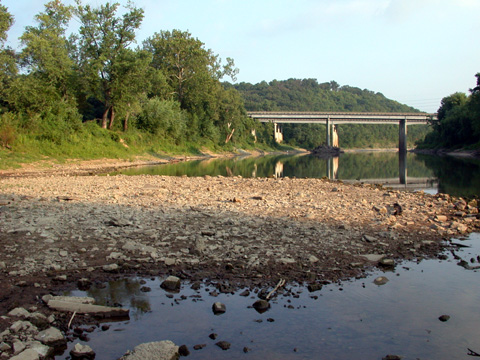 Earlier this week, in comments over at another weblog I got into a discussion about how one deals with aggressive people. Not just aggressive people – people that can be abusive, people that can be ‘acerbic’, yes that’s the word. Normally, I’d link to the post and the comments and re-print significant quotes from both; however, I’ve done this is the past with topics similar to this, and doing so brings others, willing or no, into this conversation and the focus becomes these people and the relationships between these people, when that’s not what this is all about. With respect, this is about knowing when to fight and when to walk away.

It’s a deep part of my nature not to back down from a fight, and I’ve written before of this failing or strength, depending on your view. I also have a temper, though this is something I’ve learned over the years and wasn’t born with.

(I once worked with another woman, years ago, who said I was great to work with, but needed to learn to be more aggressive. If I gave you her name, would you send her flowers or stones?)

Getting into a fight, a nasty one not a good, challenging debate, can leave you tired and discouraged and there has been times when I have walked away, sometimes with grace, sometimes less so. In these situations, I congratulate myself on not ’stooping’ to the protagonists level, only to be chastised for not standing my ground. Or worse – rising to another’s bait and rather than respond with dignity I respond with anger and storm out, and as a consequence, lose respect.

I’ve thought long about the discussion I was apart of, earlier this week, and one thing that I realized from it is that flight is not an option for me – not in life, not with my beliefs, political and otherwise, and not in my field. Most of the people I associate with in one manner or another are people who don’t suffer gladly those who walk away at the first sign of aggression, no matter how unjustified the aggression and how ugly its manifestation. More importantly, these people are also not of a mind come to my aid in a battle of my own joining, because aside from a few of us, we’re on our own in these things.

That latter has been the toughest for me because of my expectations of a friend coming to my defense; the loyal friend I can send in as my Champion to do to dirt the knave who would besmirch and sully my good name. What a rude awakening to find out that my friends either think I should take care of my own battles, as if I’m a capable, intelligent, and responsible adult; or they disagree with my joining the fight in the first place. I have, at times, found myself wishing for a sycophant or two to call my own in trying times, but I dare say this is counter-productive to my emotional growth.

The frog, the shadow, and the fish in the river. I should write another parable using this cast of characters, but for now, another photo as I continue my contemplations. 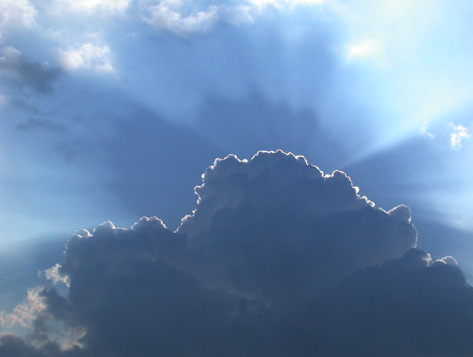 Tim Bray on the namespace fooflah that’s been happening:

Right now, in the context of the Pie/Echo/Atom/whatever project, people assert that crystallizing the meaning of embedded namespaces is the key to interoperability, the central problem, and so on. Huh? When someone proposes markup from another namespace for inclusion in a syndication feed, there are three possible outcomes:

Nobody pays attention and it isn’t much adopted.

It gets widely adopted, with semantics along the lines originally proposed.

It gets widely adopted, with some semantic drift away from the original proposal becoming evident in the implementations. (Note that this has already happened with some RSS 2.0 markup).

Oddly enough, this is exactly what will happen with proposed tags and attributes that aren’t in a different namespace.

But, there is behavioral assumptions associated with both – behavior that can be programmed into both producers and consumers of the markup. In the recent discussions about namespaces, as per Jon Udell, the programmatic behavior and assumptions might be getting a bit blurred about the meaning of it all, but within the Pie/Echo/Atom world, the discussion of namespaces is concrete: what signals a change, what works, what doesn’t, and what should be ignored.

For me, namespaces say:

I mark things that belong in a specific schema. This schema isn’t an extension to diddly squat – it can live on its own, thank you. If it didn’t, we’d have these psuedo-schemas floating around because the originators of Important Schema didn’t take the time to do their job right in the beginning. The opposite of analysis paralysis is … broken bits of schema floating around, desperately holding on to Big Brother, hoping to be acknowledged as part of the family and not the bastard add-on that crept in after darkness.

If you see a name like one of mine somewhere else that has a different namespace, this means that the two things aren’t the same. How they differ is up to organic side of this relationship to figure out. I personally don’t care. Because all I do, is mark things.

Come to think of it, there is a lot of ‘meaning’ in my understanding of namespaces, isn’t there?

I was so caught up in the Pie/Echo/Atom stuff yesterday that I missed Jon Udell’s discussion about my book. He wrote:

To get a better picture of how the CVM works, I read Shelley Powers’ very well-written new book, Practical RDF. I read it online, actually. Very cool to be able to do that. (Tank, I need a pilot program for a B-212 helicopter.) My eyelids fluttered for a while, and when I opened them again it was Chapter 10: Querying RDF: RDF as Data that emerged as pivotal.

Working through the chapter he finds:

This is cool. RDF triples are relations, and here we see that they’re amenable to relational processing. I can grok that.

Well, that made my morning. To hear others say they liked the book is a goodness, but when someone works through one of the chapters, and details an ‘Aha!’ moment, well, that’s what a writer lives for.

Jon also has some tough questions on grounding. What I should do is get with Simon St. Laurent and write an article on namespaces – the Meaning of it All – he from the tree structure, me from the graph point of view.