I swear I’m going to start a Bitches Club. And it’s not going to be for women only.

I’ve been researching the extent of offshoring in this country in the last week; I’m appalled by what I’m finding, especially offshoring as related to the technology field. The more I read, the more I find myself siding with the protectionists who believe we should penalize companies for moving jobs offshore, or for bringing in workers from other countries. But then I remember the great people I’ve worked with who were in this country on H1Bs from India, Russia, Vietnam, Australia, and other countries. I think about how much richer my life is, how much more open my understanding is, thanks to these people who learned a new language and stepped into a country and a culture where not everyone welcomed them.

I look around and see unemployed tech workers and I say to myself, we need to keep our jobs here, in this country; take care of our own. But then there are the webloggers from other countries who have forced me to think beyond my borders; who have screwed around with my vision and hearing, leaving me irreversibly damaged beyond Patriotic repair. People who just won’t let me think within the box.

Globalization is happening, and I’m not sure there’s anything we can do to fight against it. Or that we should. But too often corporations and countries invoke globalization and we don’t understand the implications – either the possible benefits or the potential for abuse.

It’s like technology: too many people just go with the technical flow without understanding what’s happening. Then something like a DDoS happens, and words like packet and SYN get thrown around and they haven’t a clue if something positive is being done to help them, or if someone is just yanking their non-tech chains.

I think that’s what defines a bitch to me. It’s not that you fight all the time; it’s that, at a minimum, you don’t accept what’s happening around you without at least trying to understand what that ‘acceptance’ means in the long run.

Tough decisions need tough talk and even tough actions at times . When the going gets bitchy, the bitches get going.

(I am going to die at a relatively young age from stress, aren’t I?)

Sheila interviews the Outrage gang, and the responses show that amidst the passion, there might also be vestiges of humor. My favorite response back to one of her questions: “If you want a nanny, move to Sweden.” I hope this humor, and its associated perspective, continue because if I can’t handle conservatives who take themselves too seriously, liberals with flecks of foam at the corners of their mouth and a demonic gleam in their eyes also turn me off.

I hesitate when I see something like ‘liberal radio’, because I don’t think we can use labels like ‘liberal’, ‘conservative’, or even ‘libertarian’, the same again. I know so-called warbloggers who are extremely liberal when it comes to social issues and internal politics. I know fiscal conservatives who are pro-choice. And there’s even a few libertarians who believe that maybe machine guns aren’t really necessary for deer hunting.

Today is a rich and complex time. It’s not the same black and white hat, good guy/bad buy world, and cookie cutter labels just don’t work. I hope that Outrage Radio goes beyond just being ‘liberal radio’, or why listen? We’ll already know what they’ll be saying.

My last rock story. Today if only the sun would cooperate I could finish the photos of the mineral collection and finally put this show on the road. There’s a metallic taste in my mouth and I find looking at the last broken and browned leaves of Fall outside to be a soothing counter-point to immersion in such vivid greens and blues and pinks and purples, oranges and golds and clears.

I measured my pyrite cube and found that it’s not a perfect square that it appears. Still, it’s close enough that when I showed it to my brother years ago, he didn’t believe it was natural – how can anything in nature follow such perfect lines? Today through an understanding and study of fractals we know that there is more of a pattern to nature than is apparent to the naked eye. 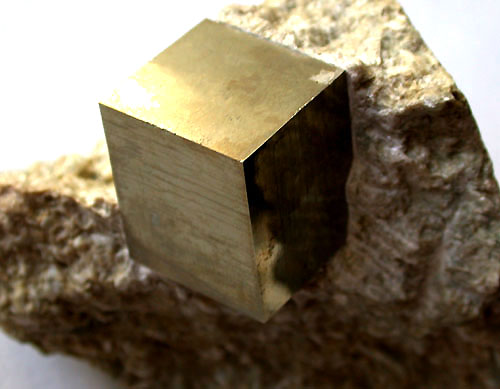 In fact, crystals of a specific mineral usually grow in precise patterns that are known as the crystal’s habit, a primary identifier of the mineral. For instance, Vanadinite has a very distinctive habit and color that make it quite easy to identify. 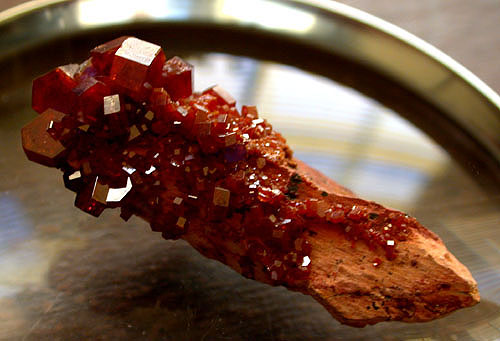 However, the appearance of consistency and pattern in nature is really an illusion; a trick to make us think we have the answers. Just when we think we’ve found the key to understanding it, nature changes. We’re then left grasping at our tattered assumptions, gazing in bewilderment at our math where two plus two does not equal four. We learned a lesson about this from the sun this week – if something so primal to our lives can suddenly change behavior, what can we depend on? Do you feel your world rocked?

Barite can be clear and precise and ordered, and there is serenity in its clean, uncluttered lines: 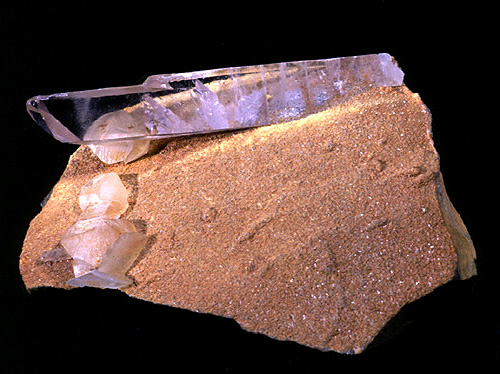 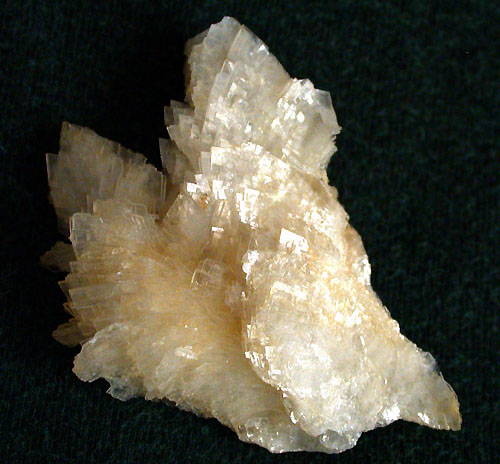 Still, if a crystal can have many forms and colors and shapes and textures, there is a finite limit to its variety. Dioptase will never be red, and molybdenite will always be metallic. It is this limit that now leads me to believe that one of my samples, a lovely bit of orange-red and clear crystals, may be a fake. I cannot find a mineral that matches the color, the weight, and the shape – all three.

It is driving me mad.

It’s a pity my pretty orange rock refuses to be classified, to fall into neat little patterns of mineral behavior: this color and this luster and this crystal shape and gravity. There’s no room in the collection for mystery. 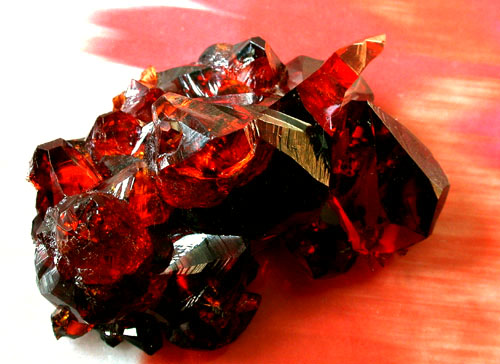 Halley Suitt wrote at misbehaving.net about .NET developer Julie Lerman and her attending the PDC (Microsoft’s Professional Developers Conference). Halley mentions the usual bad ratio of men attendees to women, which is not a surprise to any of us.

I wasn’t going to respond to Halley’s post, which was fine. But I could not let a comment Julie Lerman made go without response. First, to set the scene as to the skewed demographics of the conference (white/male, as usual) , Werner Vogels’ wrote:

The demographics are skewed not only for gender but also race and age. To dominant type: geeky white guy in the 20-30 year range and balding slighty heavyset white guys between 40-50. Hardly any African or Asian Americans. The presenters are almost all fit this stereotype.

I can agree with this assessment – it fits the conferences I’ve been to, and I’ve written about this in the past. To which Julie responds with:

Werner is right about the race demographics. You do have to discount the fact that it’s difficult for people from far away to get there. We know through INETA that there are huge .NET developer communities all over the world including places like Latin America, India, Malaysia, etc. As far as the age demographics, right again. But man, this stuff is exhausting and the older you get the harder it is to do. It is amazing to me how young so many of the “stars” of our little world are

(I did write a fairly scathing comment about this when I originally posted but I decided to remove it. I don’t think any comment is necessary. )

I am writing a very extensive essay on the technology profession, sparked in part by a thought provoking comment that Dori Smith wrote in comments at misbehaving.net:

Okay, I guess I’ll be the devil’s advocate and ask, what’s so special about getting women into tech?

I’ve been working with computers for over 25 years, and I’m at the point now where I don’t recommend that anyone go into this field, and particularly not women. The analogy I usually use is that of pro sports–if you’re going to get into the field, do it for love or for money, but don’t plan on it lasting as a lifetime career.

For love: it’s all you want to do, and it’s okay that either it’ll be a short-term paid gig or a long-term free gig. You do it because you feel driven to do it, and nobody better stand in your way. These folks (both male & female) don’t need any encouragement.

For money: you know it’s not a long-term proposition, but you’re okay with getting in, trying to grab the brass ring and make some serious dollars, and then getting out. These folks (both male & female) are going to pick tech or some other field based on how much money they think they can make in a short-time, and I (personally) don’t really care whether they decide that tech’s the answer for them or not.

But if you’re going to encourage women to go into tech, you need to make sure that they know that it’s a field just like, say, sports or modeling, where youth is always going to be more important than talent. They need to know that they’re picking a career where they’ll be unhirable once they turn 35 or have kids, or even worse, turn 35 *and* have kids.

So, what’s so good about encouraging women to go into tech?

I apologize to Dori for copying the entire comment, but I thought it was a fascinating statement to make, and one worth discussion. I know that it stopped me cold and made me question a lot of my assumptions. More on this later.

I’m also writing several new essays for my For Poets sites on DDoS and weblogging’s impact on the openness of the Internet (and vice versa), which I hope to put out this weekend. Too bad it lacks the sexy shininess of all that way cool .NET stuff. *giggle*

Also almost finished with the rock show. Today. But first, I’m going on a hike. Have to keep these old bones moving, or they get brittle, you know.