I haven’t been able to post much here because of the work on the Kitchen (BTW – it sure would be nice to see more technical people involved with this. Hint. Hint.)

Anyway, I don’t much care for IRC, but this snippet that Danny broke out of the FOAF IRC channel was extremely funny, and more than worth a link.

For those curious, smushing is a highly technical term meaning: squishing many FOAF files together. I believe.

Yesterday afternoon I walked around Forest Park in St. Louis, and today, I went to Horseshoe Lake Park in Illinois. However, on the way today, I spotted a Pumpkin Patch festival and had to stop to check it out. Which is my way of saying I have a few photos to share. (More will be posted to Tinfoil Project).

It has been a disappointing fall, for the leaf color just isn’t going to be there this year. Too dry too late, and the weather continues slightly sultry. I may be able to get some color in the Ozarks at the end of the month, but it’s not going to be as vivid as the colors were last year.

I looked all around Forest Park yesterday for some Fall color, knowing that you and I would both be disappointed by my not finding something bright and cheerful and just saturated by rich hues. However, about the only spot of bright color I ran into was in the bridesmaids dresses of a wedding party having their photos taken at the Park. It was a pretty color, too –like the deep red/orange of a new fall leaf. Everywhere I went, I seemed to meet up with the same wedding party of bride in fancy white dress, groom and groom’s men in black, and the bride’s maids in their lovely scarlet frocks. I remember thinking to myself the photographer must be a terror to have them whip around from place to place so quickly. It was when I was wandering around the Great Basin area, with the fountains and the lake, and the very picturesque bridges that I discovered the truth. Towards the west was what I thought was the wedding party I had been seeing, including the ladies in their lovely frocks. However, towards the east, I could see another wedding party and the ladies in this party were also wearing red. They were having pictures taken on one of the bridges and I could see waiting behind them another wedding party, and the maids in it were also wearing red. It was a variation, true. The first party’s ladies wore a rusty red; the second wore more of a ruby red; and the last a bright apple red. But red, nonetheless. What are the odds? I was standing there, marveling at how similar all of these wedding parties were when I noticed another limo bus pulling up, with another wedding party. The door opened, and I held my breath. It couldn’t be. It just couldn’t be. Then I spotted a bright flash of color as satin spilled out of the door.

Later as I thought about all of these weddings and the brides and their choices of what must be the popular color this Fall, and how even this pretty color lost its appeal when repeated over and over. A nice reminder that every autumn photo doesn’t have to be brilliant orange, scarlet, and yellow to be special; and I need not stop and take a photo of every orange butterfly sitting on a purple flower. Did I happen to mention that I have long legs? And no, I’m not that oddly shaped — I was wearing a jacket and carrying a camera bag. The head is mine, though.

However, that’s not to say that I’m going to walk away from color, and that’s why I enjoyed my visit to the Pumpkin Patch. It was held on a farm along Highway 111 on the way to Horsehoe Lake, and it seemed to be quite a party. There was live country music, and a haunted petting zoo–a haunted petting zoo, can you dig it?– as well as a corn castle, and hay slide. This in addition to the more traditional tractor pull, horse drawn carriage, and hayride. There was also a few other rides, but simple small fair stuff.

People could buy already harvested pumpkins and squash, or could pick their own. The ones in the field seemed pretty picked over, but I noticed that there were some nice pumpkins that were just set around, detached from the vines. I figured the farm must seed the field each day of the festival so there’s always good pumpkins in the field. A clever trick, and no harm to the act. Today I saw my first silver colored pumpkin. I’ve seen white ones before, but silver? From there it was only ten minutes to the lake. It’s more popular than I like, but enough space to allow one time to oneself. I was particularly taken with was the beautiful blue water in some areas and the green algae close to shore in others. I also rather liked the dead trees that had fallen into the lake. There’s something esthetically pleasing about these trees–a bittersweet beauty in their graceful, bare, limbs. They remind me of Audrey Hepburn. Fishing is popular in this lake and there were several fishermen out when I was there. I watched one pull a fish from the lake, pull it off the line, toss it on to the grass with others, before re-baiting his hook and throwing the line back in–in one smooth motion. Takes years of fishing to get that proficient, but a lot of people depend on the local fish, and game, for their meat.

There’s an island that can be reached by a built-up ridge intersecting the water. The hike I followed was on this island and was supposed to be 2 miles, but after the Pumpkin Patch, I was already tired and the distance seemed longer. It was also quite warm, though a lovely breeze was blowing. Not many birds this time of day, but lots of grasshoppers and other insects. I watched heron in the lake, but didn’t get close enough for any decent photo.

About half way around I met two older ladies out walking their dogs, and we ended up chatting as I petted their pups. They lived in Illinois but had just spent several weeks traveling across the northern part of the states to Maine and back. They were so delighted by their trip that I kept asking them questions about it, just to hear them talk.

In Maine or Michigan, I’m not sure which, they had picked blueberries from bushes and had them for their breakfast, and I gather this was their first time exposed to blueberries in the wild. Both kept talking about grabbing handfuls of blueberries, and how they tasted so much better than anything they’d had before. Isn’t it wonderful to meet people who take such a delight from such an simple activity? I grew up in an area where huckleberries grew wild and we would pick them every year; even then, I could identify with these ladies–picking berries and then putting them directly on your pancakes for a late morning breakfast is an immensely satisfying experience.

About like going out to a pumpkin patch for your own Halloween pumpkin. Or catching your fish directly from a lake. Sure beats going to K-Mart or the Mall. Yesterday I drove to the core of the Ozark region, in south central Missouri near Mountain View. I wanted to check out how far along the fall foliage was, and also to look at a couple of the old mills along the North Fork river.

Along the way, I spotted my first Missouri armadillo. Unfortunately, it was road kill, but I hope to see more live ones towards the end of October when I’ll spend a couple of days in the area, taking photos. The trip is just too far to make for effective day shoots, and, frankly, there’s also too much to see — I thought the area around the Meramec or the Missouri or Mississippi rivers was lovely, but there’s something about the white water charm and crystal clear waters of the North Fork that appeals to my Northwestern roots. 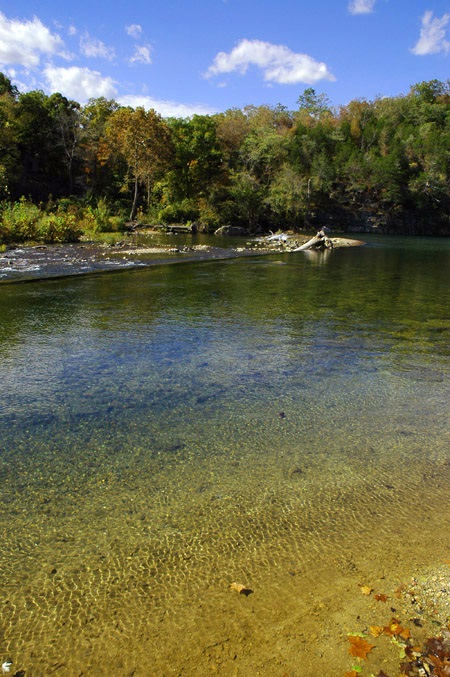 I wonder if I’ll ever discover all of the faces Missouri shows. There’s the southern face along the Mississippi, through St. Louis and along the north-south trek. Then there’s the east-west feel of Missouri along the Missouri River, with its old Indian legends and the Lewis and Clark trail. Towards Kansas City is that strong midwestern influence of corn and wheat and cattle and good steaks–enough to make a man want to loosen his bible belt. And now there’s the Ozarks and the odd backwoods magical feel to the forest, as if one can expect gnomes to pop up at any moment. Or at least a hillbilly or two.

The Ozarks with its old bridges and mills, such as the old Dawt Mill that I visited yesterday. 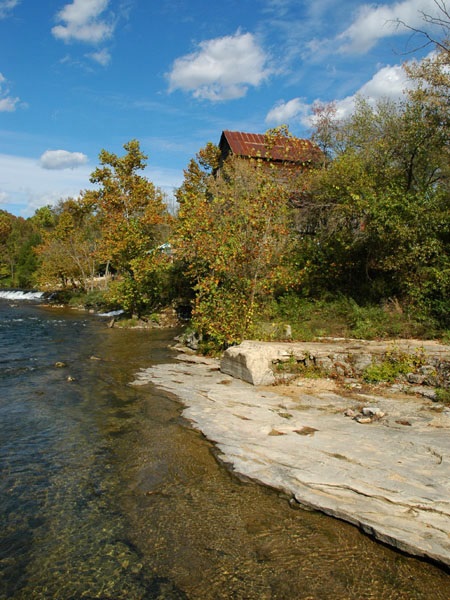 The North Fork river is just what it sounds like, the northern fork of the White River. Its crystal clear waters are home to rainbow trout so if one gets tired of fishing for catfish along the ‘Sip, one could drop over for a little trout fishing.

(Speaking of trout, if you ever get a chance to go trout fishing, there is nothing better in the world than freshly caught trout, pan fried. You can keep your fancy sauces, and gourmet presentation. Just coat that bugger and fry it up nice and golden in a cast iron skillet, and dig in with your fork. No need to dirty any plates. )

The river winds alongside Mark Twain forest where black bear gambol about with bobcat, armadillos, white tailed deer, coyote, river otters, and gray and red fox. According to the Ozark Fall Foliage report this is a good year to get photographs of the critters. 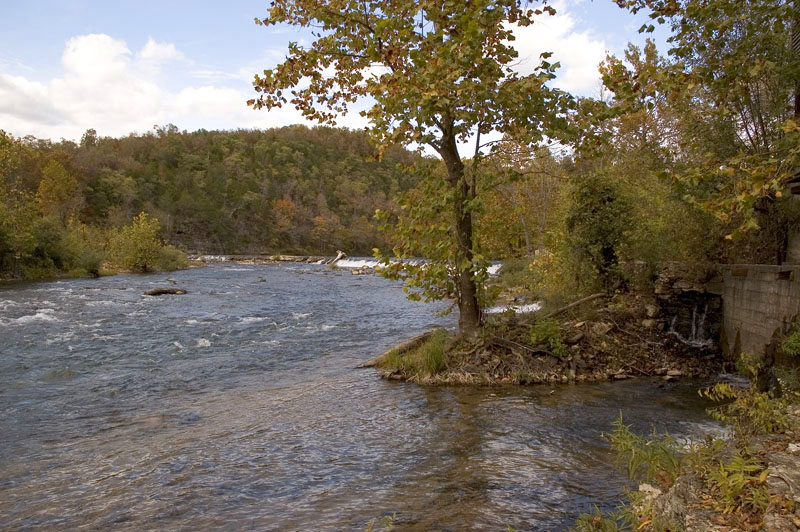 The weather has been rainy, which is good for the vegetation, but not for photos. My hope is to time my second trip just right to get the foliage at or near peak, heading down into Arkansas as well as staying in Missouri; spending a few days, exploring and taking photos. I’ll probably head down the last week of October.

I had a wonderful drive yesterday. I really enjoyed seeing new scenes, and tripping around the mill, exploring. Next to the mill was a bridge across the river that was basically a plain concrete slab — no walls– and just wide enough for a car. Or a person on foot, like myself. I also explosured around the mill knowing that this time of year, at least, I don’t have to worry about accidentally brushing against poison ivy; it turns a brilliant scarlet in the fall and is easy to spot.

I also enjoyed the drive — putting on some good music, and just going with the flow of the traffic. More than that, though, it was good to get away from the computer. I must be away more in the future.

There’s so much beauty around us. And it goes by so quickly. About as quickly as the last of the fall color. As Gary Cooley from the Ozark Mountain Website says:

Once the peak is here the leaves are at a very tender stage. They dangle by a few molecules at the stem base where it connects to the twig. One good storm and down they come.

Same can be said for most of life, eh? 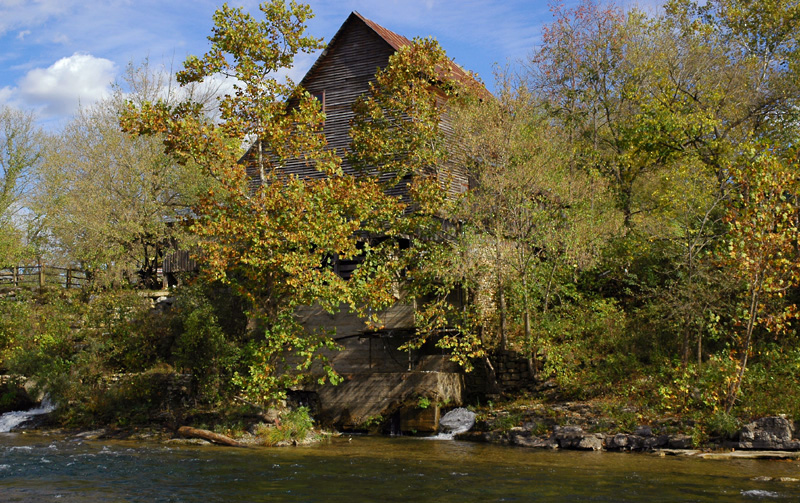