Our apartment complex is quit diversified, which is one reason I like it so much. There’s an older woman and her daughter who wear the most beautiful saris, and the guy across the way is a young hip-hop rapster, or whatever they’re called.

There is one couple who has always fascinated me. I believe they’re Chinese, but they could be descendant from another nationality. For the sake of the story, we’ll think of them as The Chinese Couple.

Regardless of the weather, he’s out every day for a walk around the complex. Most days, his wife accompanies him. I use the word ‘accompany’ loosely, because she always walks five paces behind him. No matter what happens, whether crossing the street or rounding corners, she maintains that distance.

They’re an older couple but not elderly. Probably about five or ten years older than me. When the man walks, he does so with his hands clasped, firmly but comfortably, behind his back. He never looks right or left; never looks back at his wife, but always straight ahead.

She is not quite as rigid. She tends to look at the ground or his back, but I’ve caught her eye a time or too and she has a shy smile for me.

Today, was beautiful, with cool winds after last night’s storm. I was standing at the screen door, drinking my morning coffee when I noticed them. Both were wearing black pajama-like pants and black nylon jackets. He had a black t-shirt, she had a white and blue floral print. Today’s walk differed from all the others, as she was talking on a cellphone.

Now you know when you talk on a cellphone that your walking rhythm is disrupted. While she talked, she began to slow down. When he finished crossing the street in front of our place, she was actually 20 or so paces away from him.

He stopped on the corner, but not to turn around, either to admonish or to wait patiently. No, he lifted his head straight in front of him, and contemplated the top of the large tree directly across the way. Picture, if you will, a mature, distinguished Chinese gentleman dressed in black, hands clasped firmly behind him, face lifted towards the heavens. There he remained, face impassive, the only movement a slight flexing of his back — forward, as if he had risen on the balls of his feet.

She continued walking leisurely, talking on the phone, until she had crossed the street. She moved into her usual place, directly behind the man, but she stopped too soon and ended up being about ten paces back. He didn’t make a move, just stood there, legs locked, hands clasped, face turned to the heaven in contemplation.

Eventually, realizing her mistake, she moved forward five paces, still talking on the phone. It was as if she stepped on a switch, because as soon as she was her usual five paces back, he turned away from the tree, face directly forward, and continued his walk.

She was still on the phone, though, and her pace continued to be irregular. It was just before I was going to look away, just before they moved past the building across the way that I caught him–quickly, and as stealthily as possible, glancing ever so slightly over his left shoulder behind him, to see where his wife was; making an imperceptible change in his pace so that the distance between them remained constant.

One last set of photos from the Gardens, and then I’m off to travel a bit, walk a lot, take care of some business and maybe even more photos.

The weather has been in the 80s and wet. Spring didn’t happen, it exploded. Normally the flowers occur in stages, with crocus, daffodil, and magnolia in stage one; followed by the flowering fruit trees and tulips in stage two. This year, everything was up at once. Walking through the park was like walking into Nordstrom, between the two ladies with the perfume.

Before going to the park yesterday, I was browsing about when I discovered a weblog post where the author asked the question, What makes a great photo?. Several people had responded and the responses were published in the post. After reading it, as I was walking about taking pictures and later, as I was processing photos from my trip, I wondered why no one ever celebrates their less than perfect photo picture taking quirks. After all, if we all took photos like the experts recommend there would be no individuality. Prettier, more profound pictures, perhaps–but no individuality.

For instance, take the following picture. It’s of new leaves. Normally in the Spring, you take pictures of flowers, not leaves. But look at this picture: what are those things surrounding the leaves? That’s the first thing I thought when looking at the tree, what are those things around the leaves? I don’t remember seeing weird little things like that before. Have they always been there, and I hadn’t noticed them? Unique to this tree? Some kind of unhealthy, tuberous growth, which makes itself look green and innocent so it isn’t sprayed?

Quirk one: Nature works really hard, don’t waste the effort by focusing only on tulips. 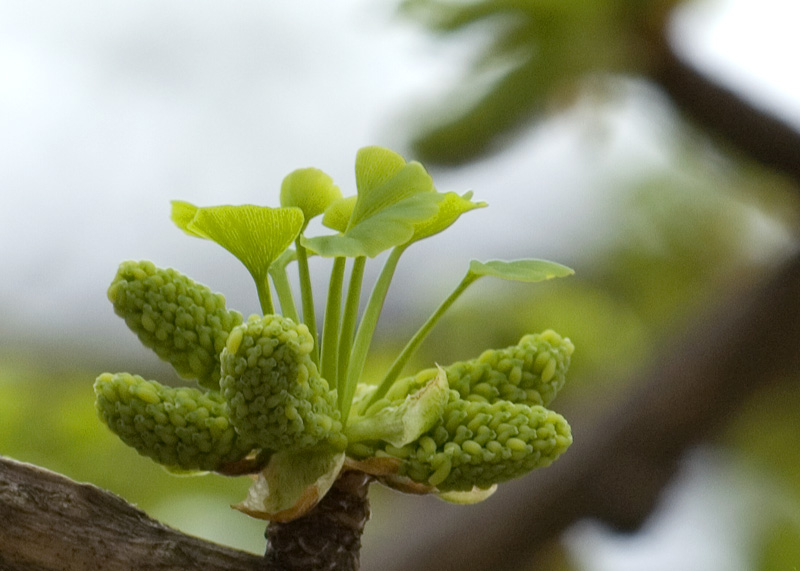 This next violates probably a dozen rules of photography. There’s conflicting patterns all over, way too much detail and screams ‘busy’. Look at that tree? It doesn’t even have the decency to lose its last few leaves from fall. No, they’ll probably hang around until they’re pushed off by the new leaves.

And the trunk of the tree looks like it has an eye.

Quirk two: Go ahead and take a messy picture. Tell people to look for the fractal patterns. Sit back and snicker. 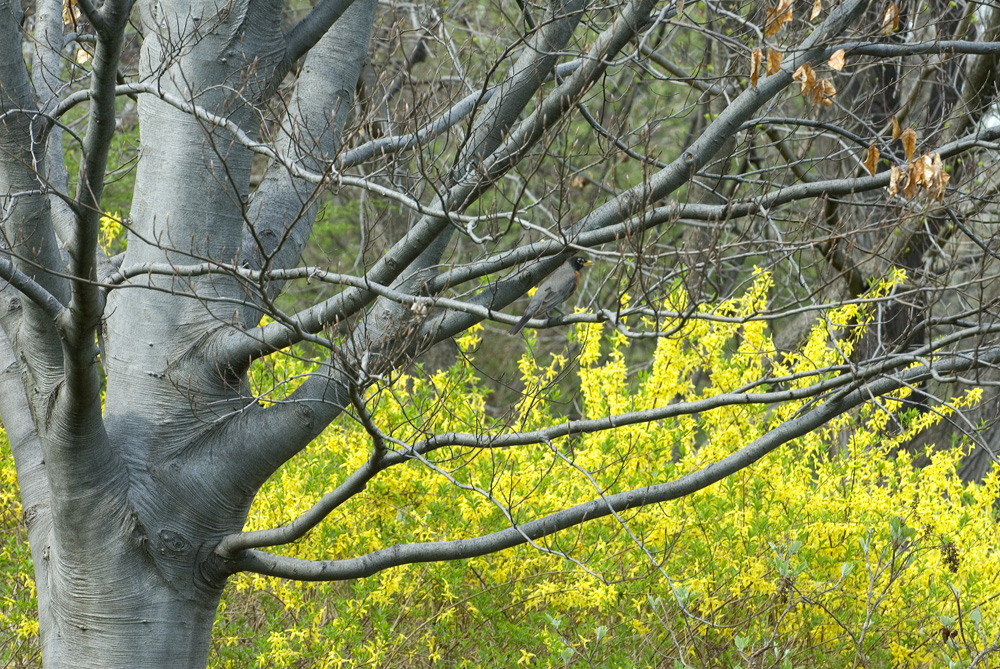 Daffodils. I got your daffodils here.

Not a bad grouping, but I didn’t have the focus straight on, and so the flowers aren’t sharp. That’s violating the most cardinal rule: sharp photos. However, I liked the grouping–it’s like the flowers were having a chat. 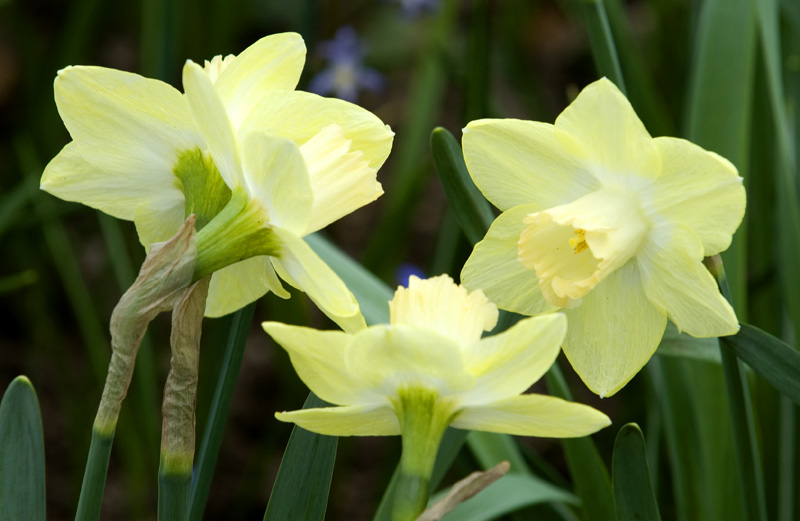 In this one, now, the fuzziness was intentional. It’s called bokeh.

Quirk Four: As long as your mistake has a Japanese name, it’s intentional. 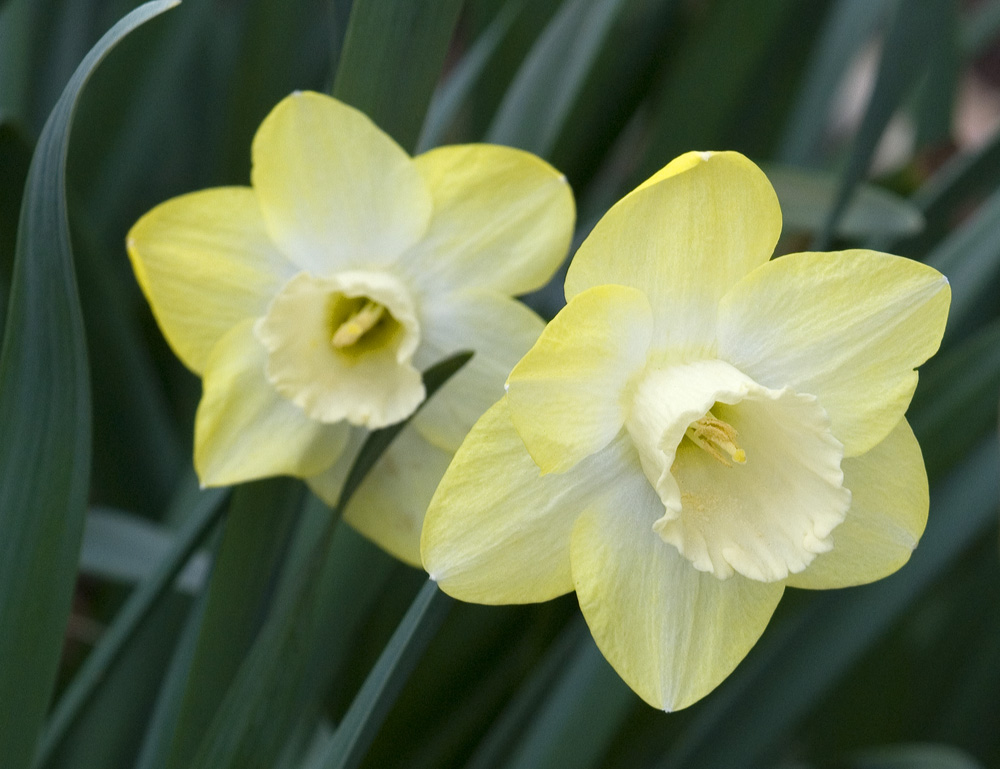 Now this is a split corona daffodil. It’s it an absolutely beautiful flower. With flowers such as these, doesn’t matter what you do with the camera, it will look good. You could take pictures of the flower behind you by bending over and pointing the camera between your legs and the photo will look good.

Quirk five: Bend over, take pictures behind you by pointing the camera between your legs. Suggest you save this for wilderness pictures. 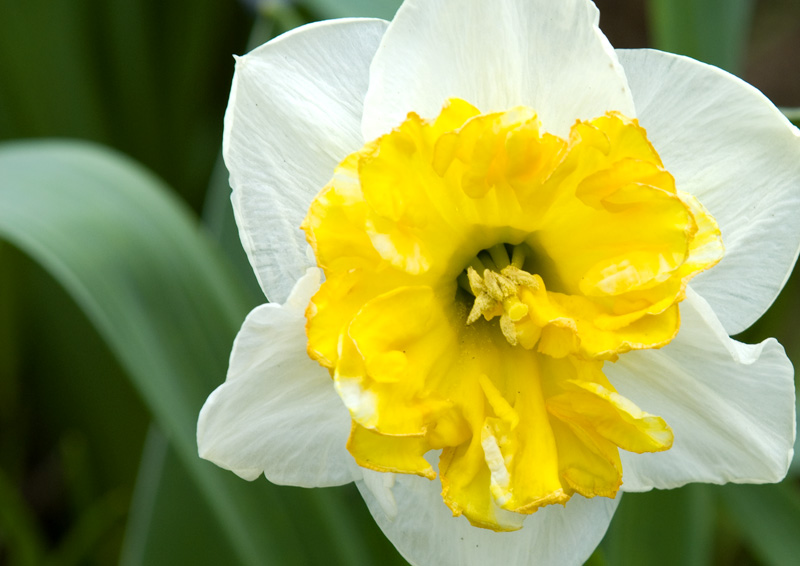 The next two photos are of the same type of flower. Now, typically you won’t publish more than one photo of the same subject. You’d pick your favorite, which shows a fine sense of discrimination by picking only the best rather than put up many.

Why am I repeating the flowers? I liked the first photo better, but I liked the pollen dribble on the second. 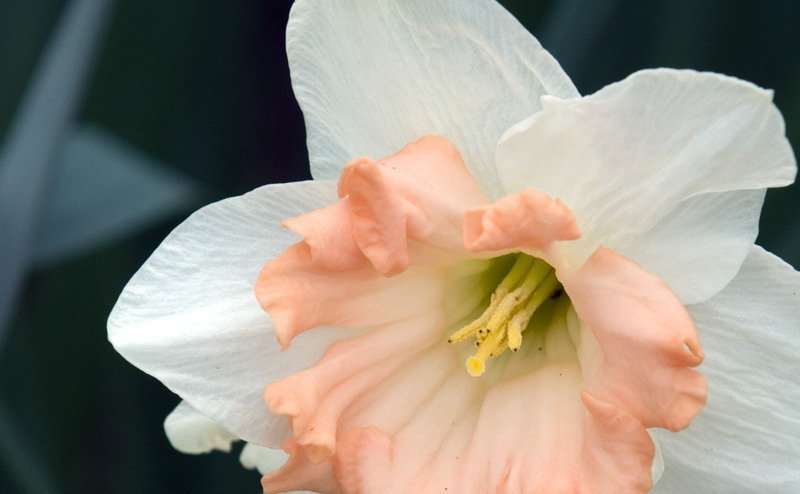 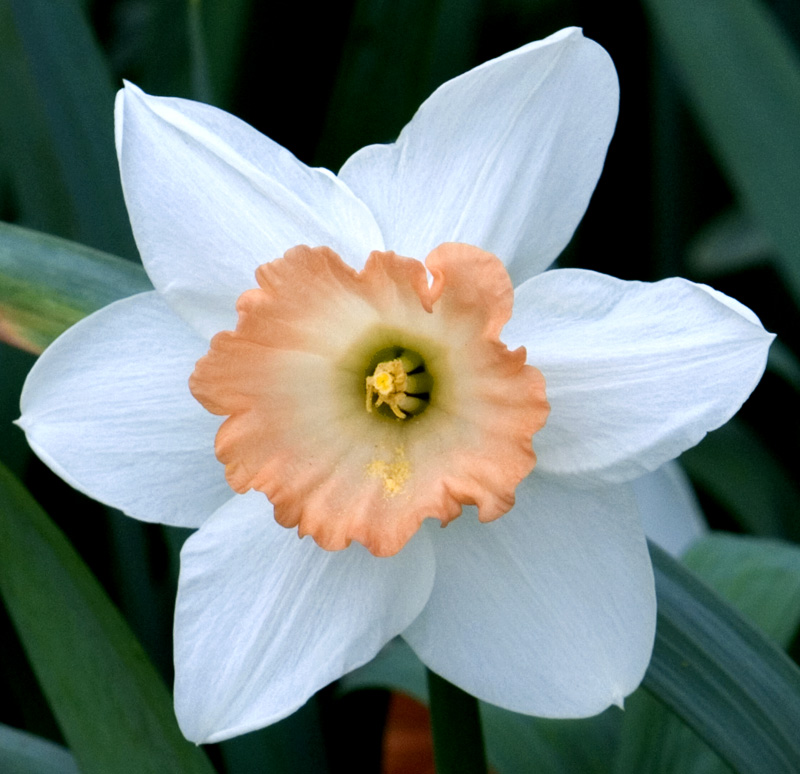 The next photo is sharp enough, positioned correctly, and the light seems to be good. But it just sits there, limp. Why this picture then?

I liked the background. That’s my deep, dark secret for most of my plant and flower pictures: I find a background I like, and then I go look for something to plunk into the foreground to justify the shot.

Quirk seven: Backgrounds. Find a background, hope a deer walks in front of the lens. 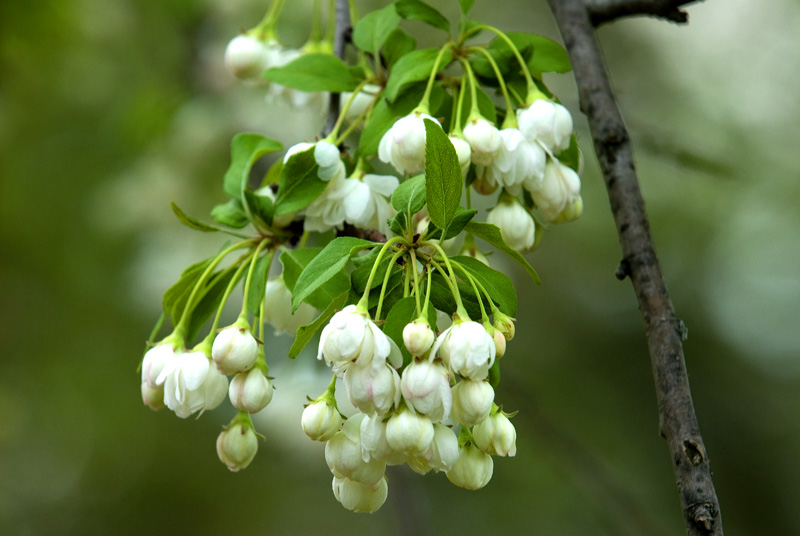 This next picture, my god what was I thinking? It looks like Van Gogh decided to paint over a picture by Monet.

Quirk eight: create a photograph that looks like a combination of the work of Van Gogh and Monet. 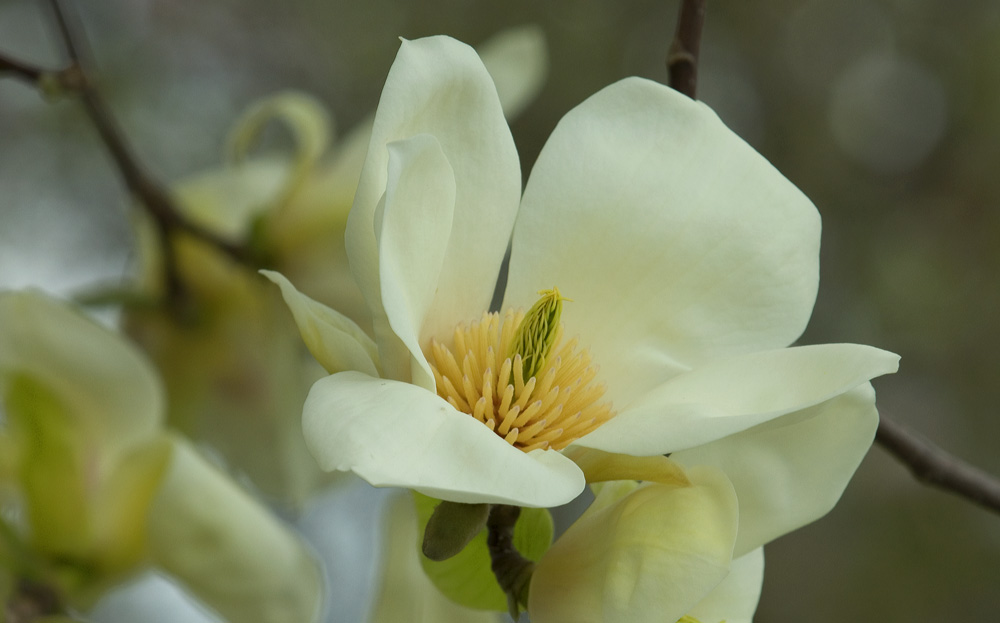 Have you ever noticed with flower photos how the photographer will place the flower in the last or first vertical third, and leave primarily blank space in the rest of the frame? This technique gives the photo sensitivity and mood? 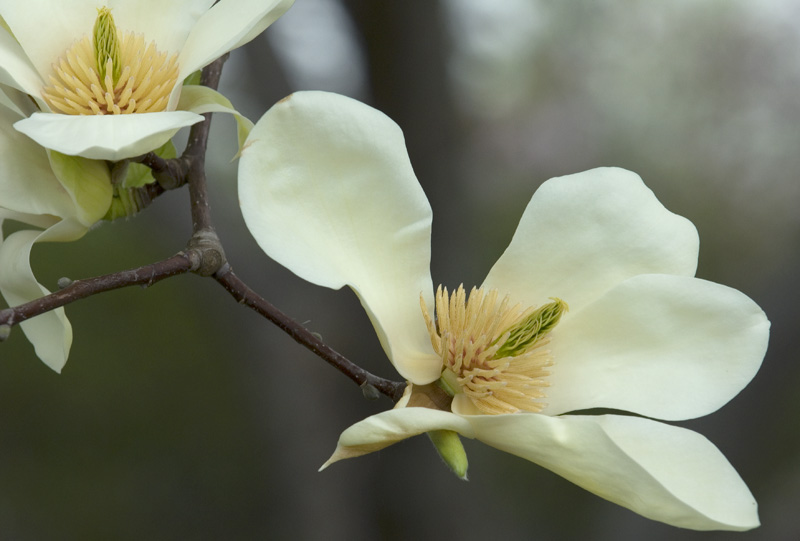 Again, same tree. I love this tree. It’s one of my favorite trees.

Quirk ten: one can never have too many pictures of something we love. Next week: pictures of Peeps. 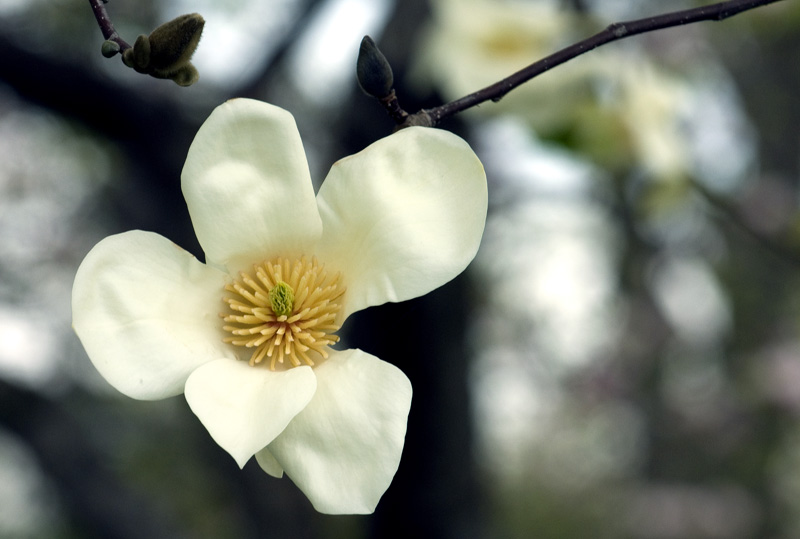 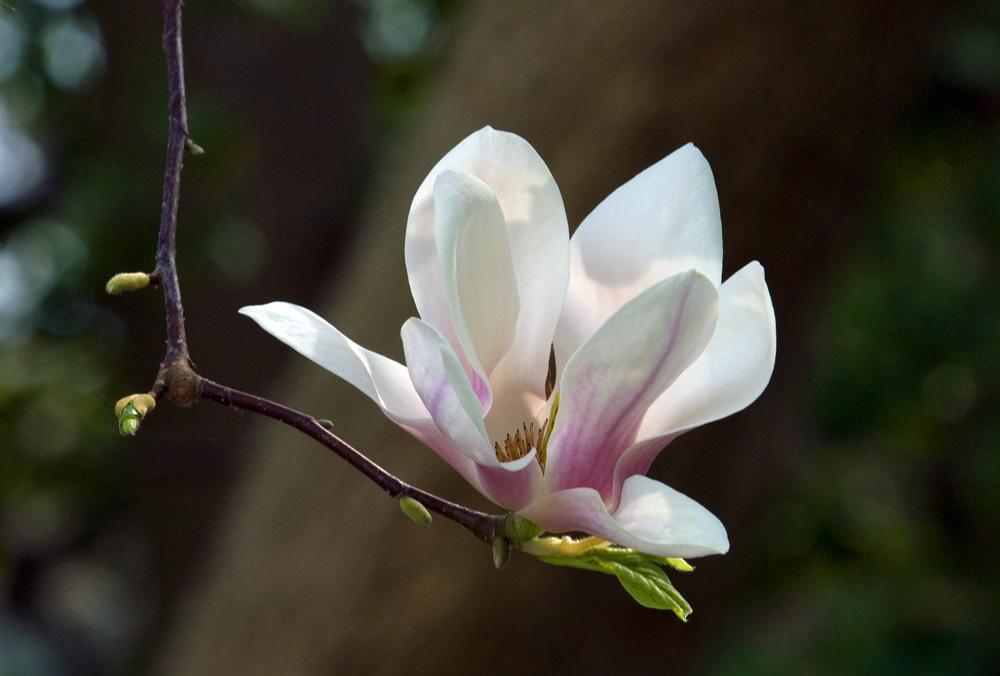 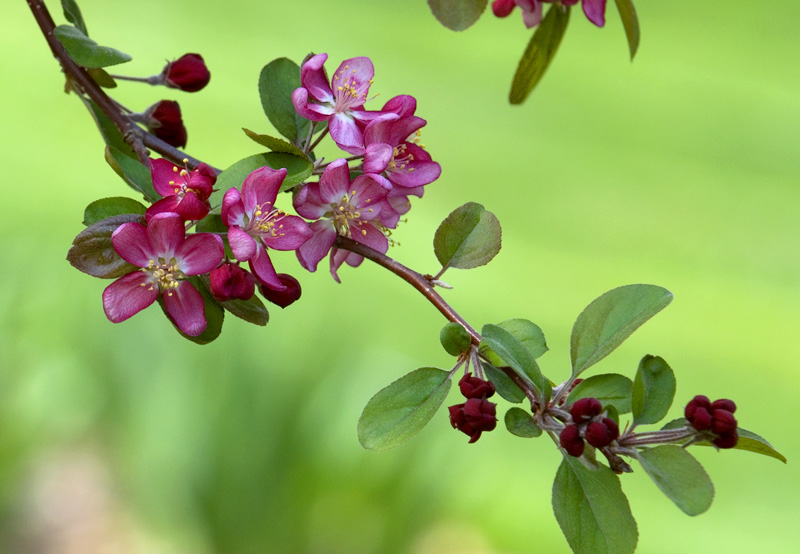 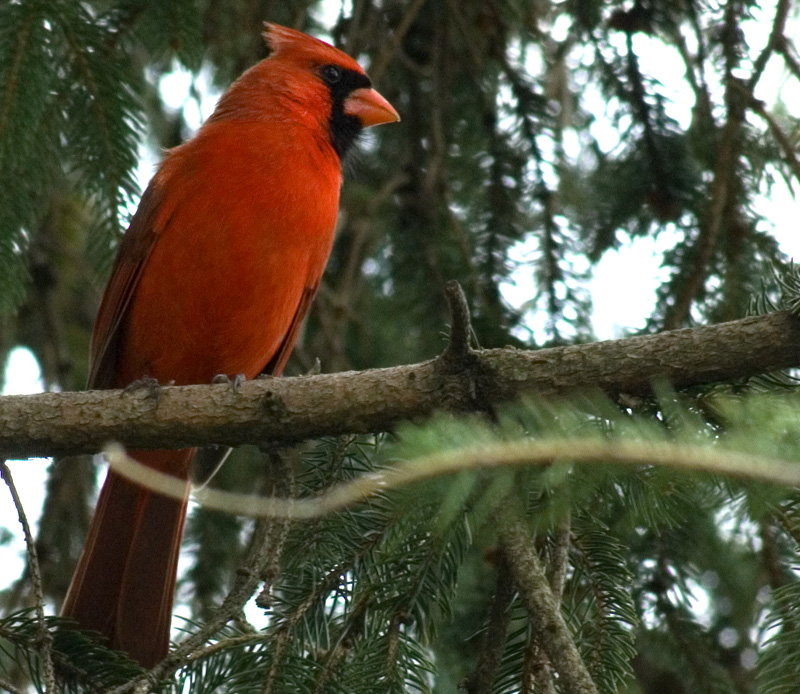 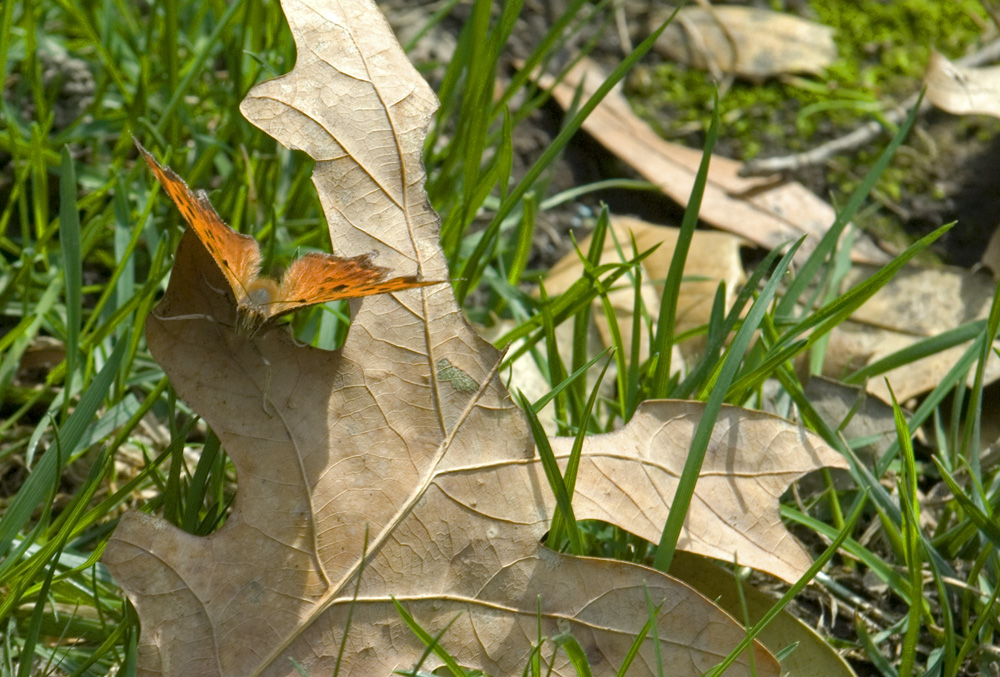 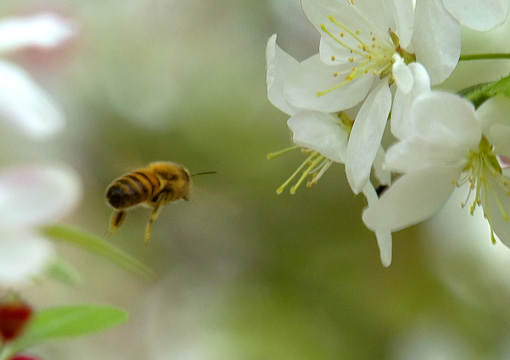 For the first time, I managed to make it to Shaw’s Nature Center when the daffodils are at their peak. The Center’s daffodils have grown wild, and as such they blanket the grounds.

In the past, I’ve typically taken photos of daffodils up close, brightly lit by the sun and shining with vivid color–a harlot among the more delicately hued spring flowers, all tarted up in their brassy yellows and bright greens.

I noticed yesterday, though, that the daffodil is really a very shy flower whose color is much more muted and subtle when you view the flower as part of the landscape. By itself and very close, it is a lovely flower and can cheer even the most determined grump. However, when the daffodils form part of a scene, just barely there at the edge of one’s consciousness, they draw the eye across the fields to to a distant edge you can’t quite see. A reminder of Spring, yes; but also a reminder that the seeming infinity of Spring is merely an illusion. 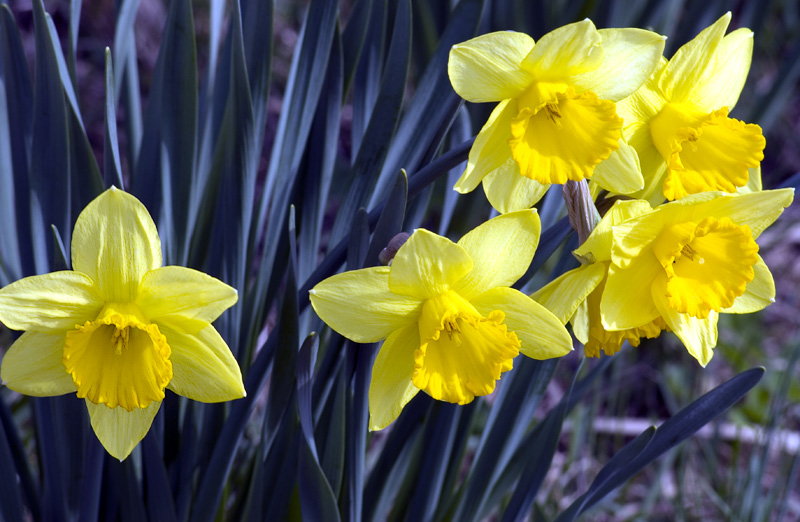 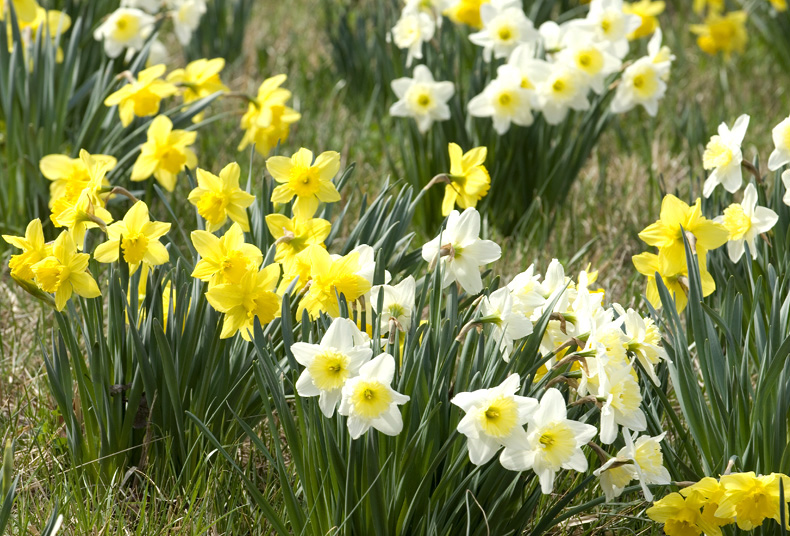 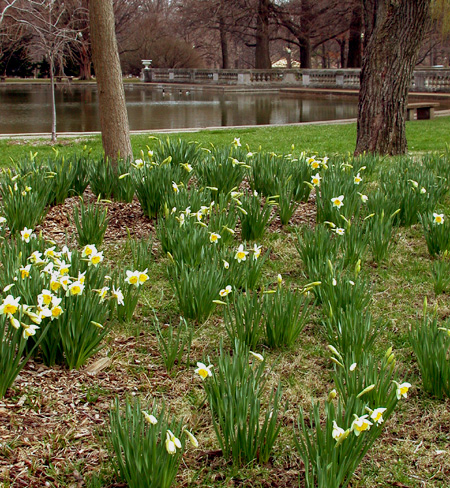 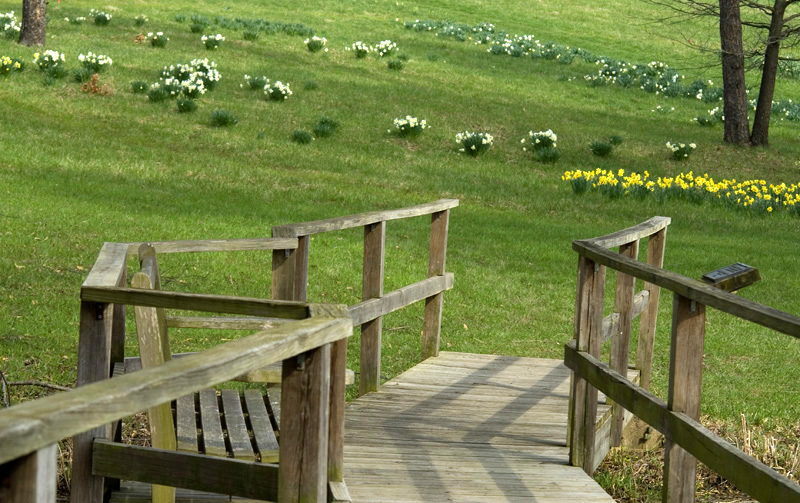 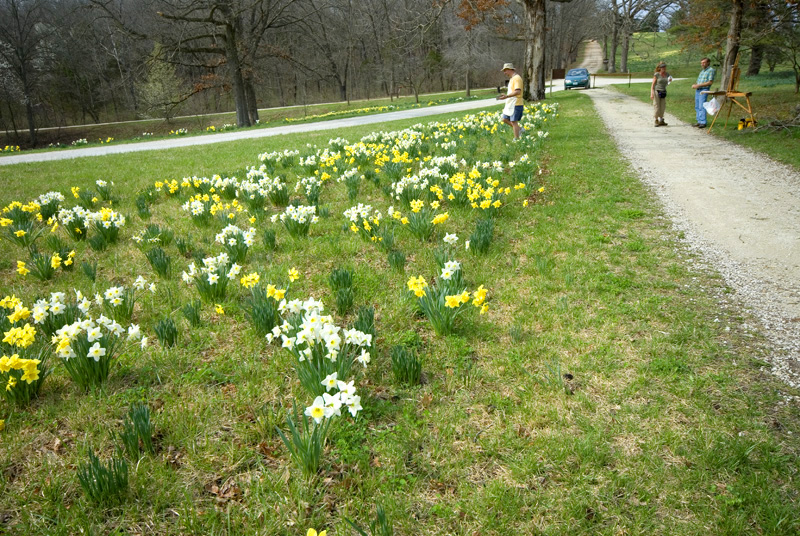 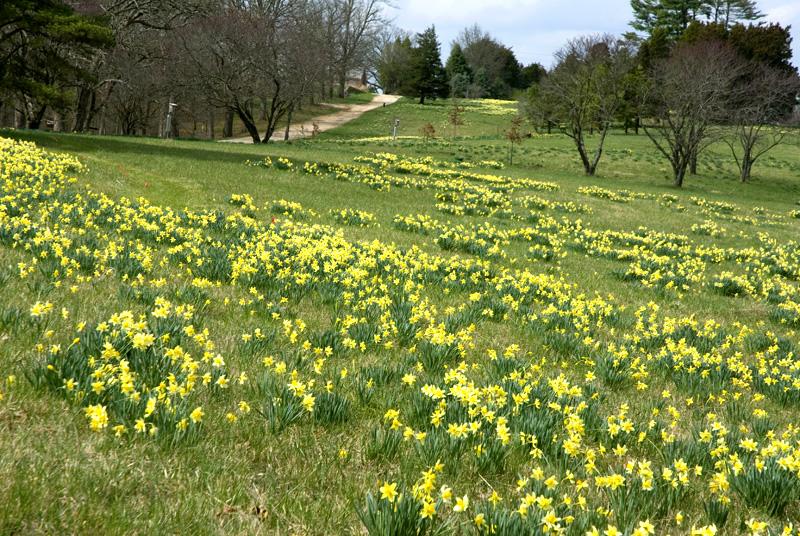 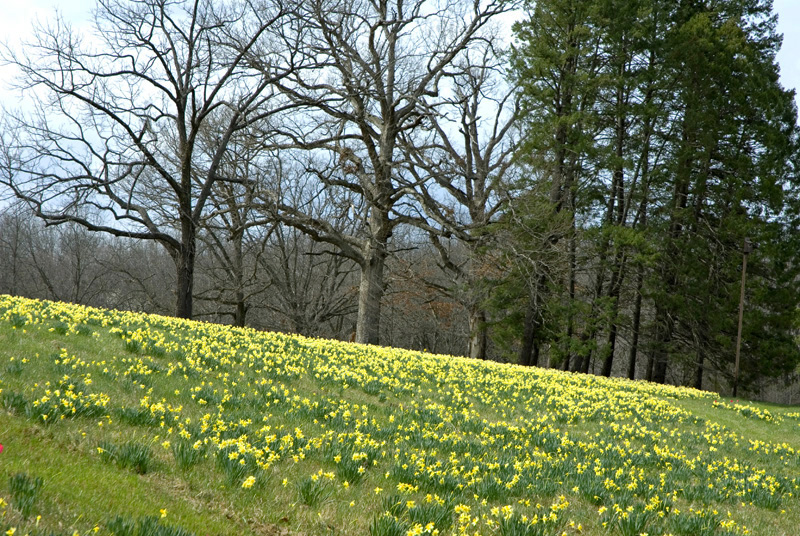 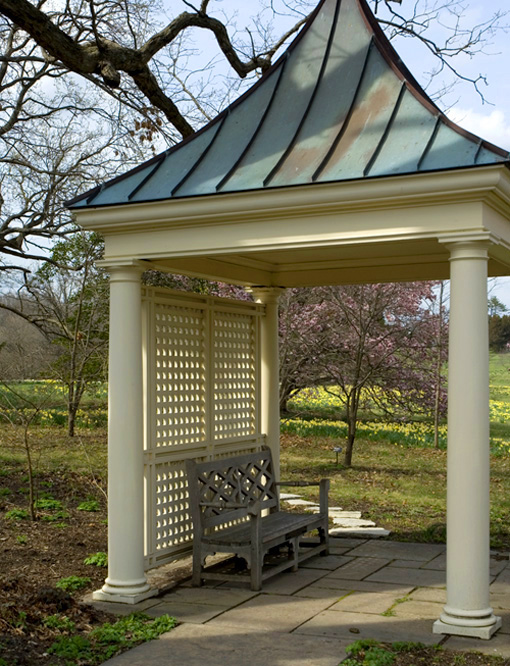 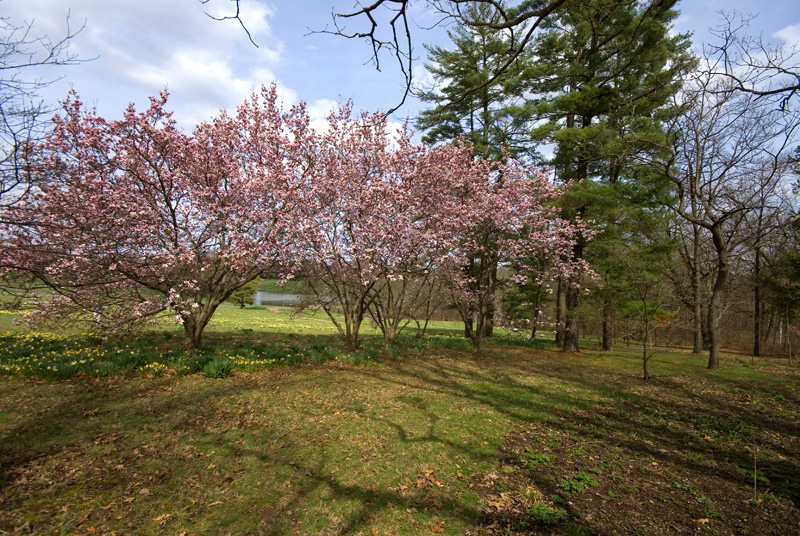 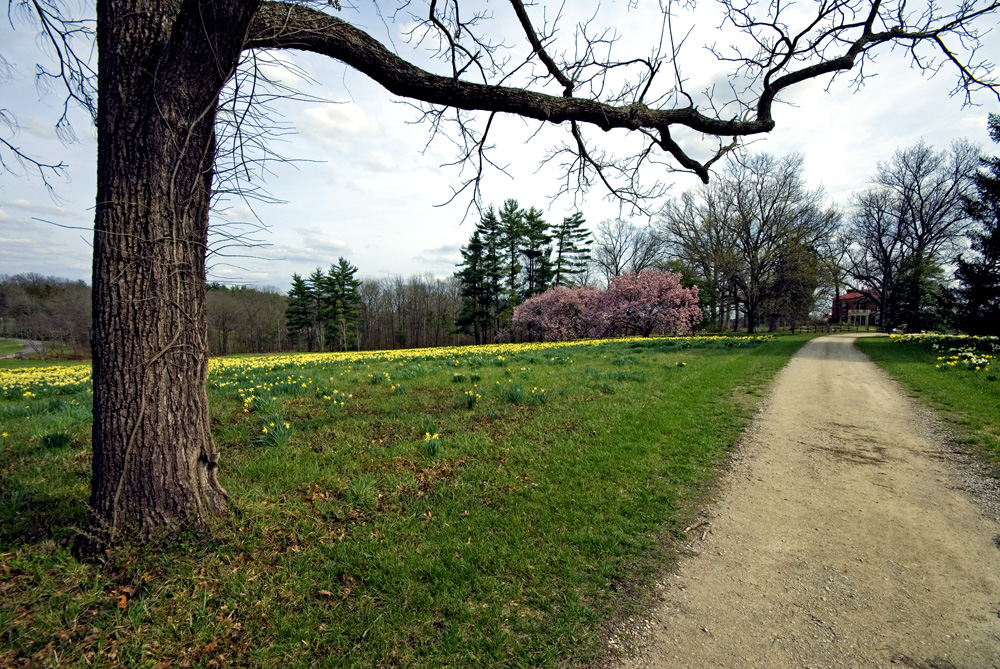