The iPhoney emulator provides a means to test your site or web application in an iPhone environment, without having to shell out the money or sign up for two years of service at AT & T.

Apple has also, sort of, kind of, provided development guidelines. The company stresses making content ‘double tap’ friendly: blocks of text, sized just right. You’ll have to decide how much of your site you want to make ‘double tap’ friendly, and whether attracting iPhone users is worth the extra effort.

West Civ has done a more detailed look at the design specs for the device, and points to a Google Group related to the product (via Virginia DeBolt).

Ajaxian has created a whole new category devoted to iPhone development. GigaOm asks Where are the games?. Why, right here: Pick-a-Pair small game, Medium Game, and Triple card game. These are image match games based on technology close to 8 years old (JavaScript/HTML) that I updated to use with the Flickr recently loaded image queue (accessible via the API). I thought the games might work with iPhone, and according to iPhoney, they do. 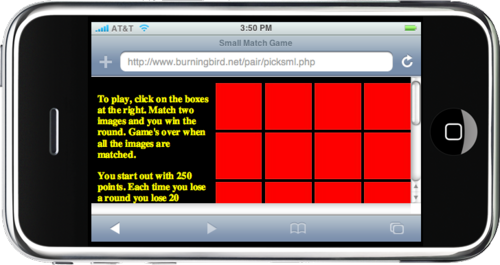 I feel so über hip, now.

Before rushing off to hack the black, one thing I take away when reading Apple’s developer material is that the company doesn’t necessarily want people building overly complicated, special purpose iPhone applications; or, at a minimum, applications that make torturous use of any possible hacked entry into the device. The stress is on small image and script files, clean scripts, fast application execution time, and fast loads. If you build an application on an undocumented hack, don’t be surprised to find that door slammed in your face next software update.

Apple wants control with this device. Keep that in mind when you spend your time on finding those clever ‘workarounds’.

Missouri Botanical Garden has partnered with other scientific institutions on the creation of the Encyclopedia of Life. The purpose of this site is to provide a free, publicly accessible site with a page for every species of animal and plant on Earth. According to an article at PNN Online:

Over the next 10 years, the Encyclopedia of Life will create Internet pages for all 1.8 million species currently named. It will expedite the classification of the millions of species yet to be discovered and catalogued as well. The pages […] will provide written information and, when available, photographs, video, sound, location maps, and other multimedia information on each species. Built on the scientific integrity of thousands of experts around the globe, the Encyclopedia will be a moderated wiki-style environment, freely available to all users everywhere.

“The Encyclopedia of Life will be a vital tool for scientists, researchers, and educators across the globe, providing easy access to the latest and best information on all known species,” said Jonathan F. Fanton, President of the John D. and Catherine T. MacArthur Foundation. “Technology is allowing science to grasp the immense complexity of life on this planet. Sharing what we know, we can protect Earth’s biodiversity and better conserve our natural heritage.”

“For more than 250 years, scientists have catalogued life, and our traditional catalogues have become unwieldy,” said Ralph E. Gomory, President of the Alfred P. Sloan Foundation. “The Encyclopedia of Life will provide the citizens of the world a ‘macroscope’ of almost unimaginable power to find and create understanding of biodiversity across the globe. It will enable us to map and discover things so numerous or vast they overwhelm our normal vision.”

From one of the demonstration page, this site looks to be one of the better designed and organized of its kind, and a rich source of data about the natural world. It incorporates an amazing array of media and resources, and turns around and makes all available to anyone, without limitation.

The EoL is an expert driven wiki site–top down, not bottom up like Wikipedia. Contributions will be welcomed from all, but the overall effort is authenticated by trained scientists. I imagine that media files, in particular, will be welcome. The Missouri Botanical Garden is providing most of the information about the plants from its store of data it has been gathering for over 100 years. Much of this data is already available for botanists via the MBG’s own library, and available for everyone at the Botanicus Digital Library.

(The Botanicus Digital Library features pages scanned from many (if not all) of the MBG books. Through this effort, the organization has developed a metadata model that will now be used in the new effort for the EoL. More at the Botanicus Weblog. )

Bill Moyers did an interview on the EoL with the concept creator, E. O. Wilson. Wilson talked on this at the recent TED conference, and gave a demo of the end product that just blew me away. Find the interview at FastTrack Musings.

The EoL is an incredibly exciting project, probably one of the most important on the internets. The plan is to start putting pages online mid-2008. Even now, the list of sources for the site is a rich information resource.

More on the EoL and how RDF will play a part at an earlier post I missed.

Tonight I walked longer than I normally do and ended up going to my library at a later time. Driving back, the neighborhoods were getting dark and I could see the fireflies out and about in the bushes.

Just past the odd house with the stone fence, but before the miniature castle, one of the fireflies headed into my car from the front and I hit him. Normally hitting bugs is not something I worry about, unless it’s a butterfly or moth; but fireflies seem such gentle creatures, and provide so much enjoyment. I’ve always appreciated how they hover about you as you stand near them, as if they’re curious, but unafraid, of this big monstrosity.

Another block, and more fireflies appeared in front of me. I couldn’t avoid them; only catching a brief glimpse of their bright neon-green light before they’re smashed against the metal (well, plastic) of my car.

The next block and it seemed as if I had a stream of fireflies heading towards my car; I can only guess they were attracted, or confused by, the lights. Each bravely flickered its butt in one last exaltation of light before throwing itself in a frenzy of hopeful lust to a very quick, and very sure, death.

When I got home, I contemplated the orgasmic remains of the tiny, now dark creatures on my bumper and thought that all things being equal, it wasn’t a bad way to go.