As part of a story I’m doing for MissouriGreen, a first set of photos of the famous Gringo Jones Import and Other Stuff near the Botanical Garden. The sign out front says it all: Business Sucks. Come in and deal. 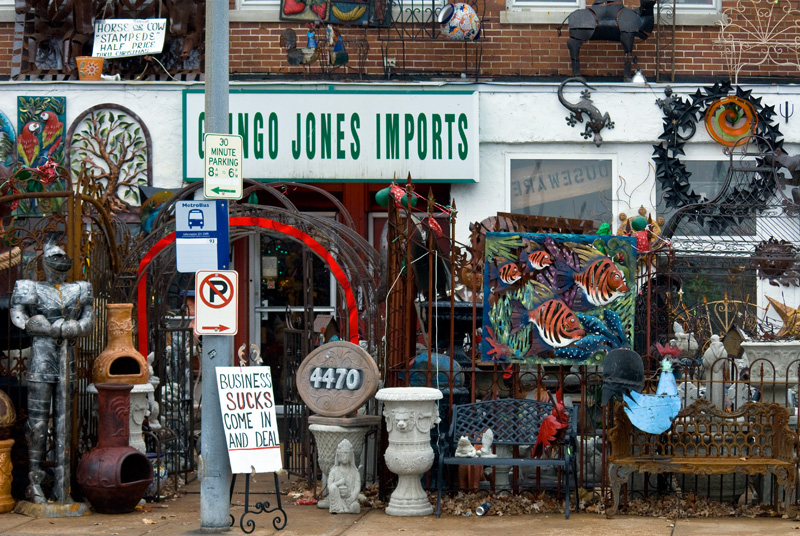 Welcome to Gringo Jones, one of the funnest, funkiest places in St. Louis. 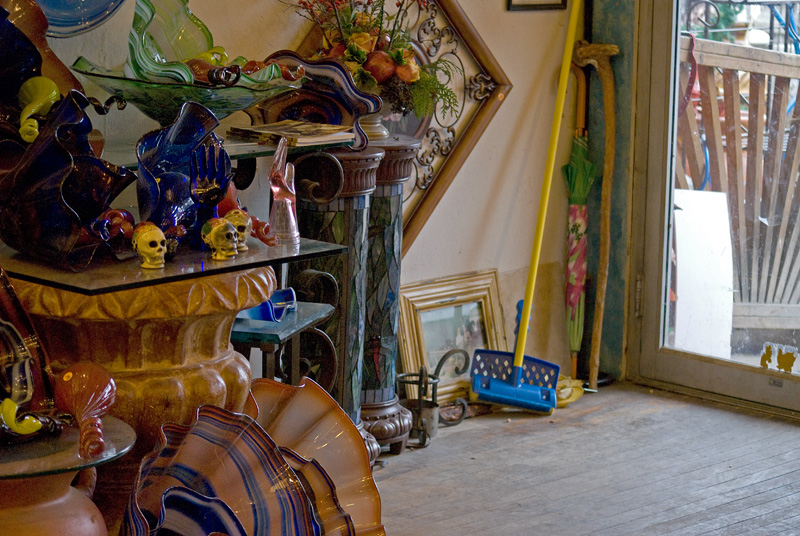 Everything is for sale. 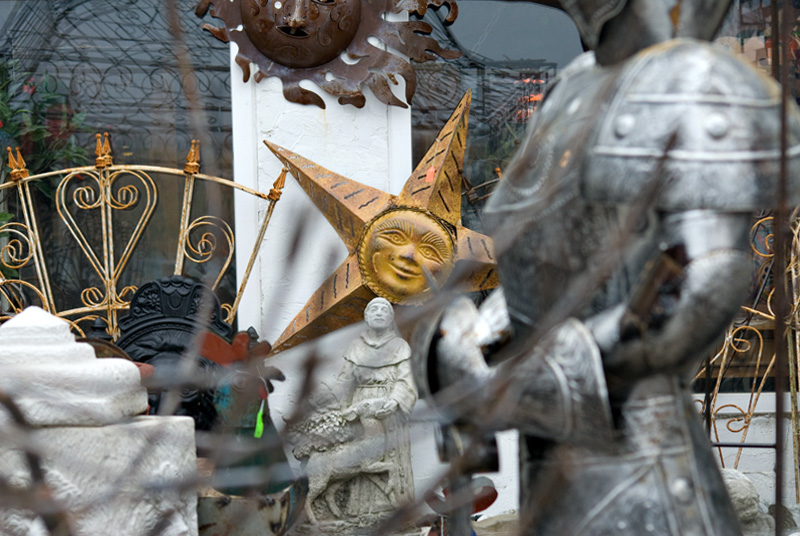 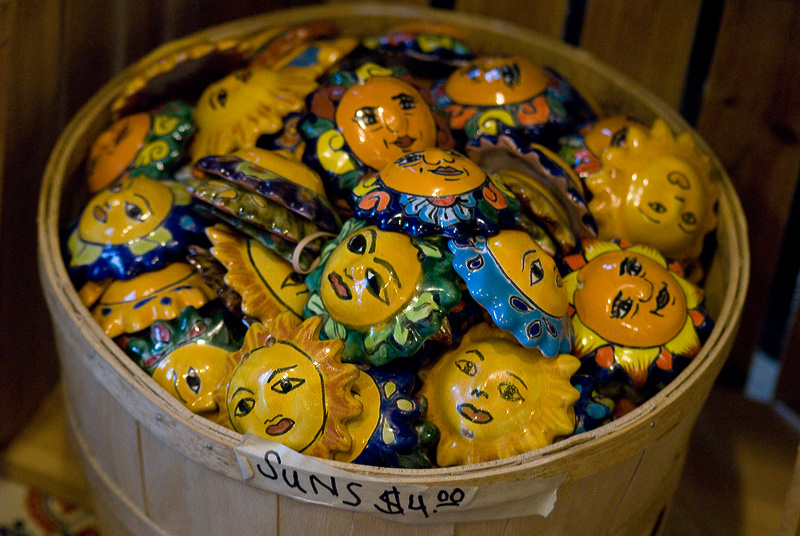 Except the four dogs and three cats. Or is that four cats and three dogs? 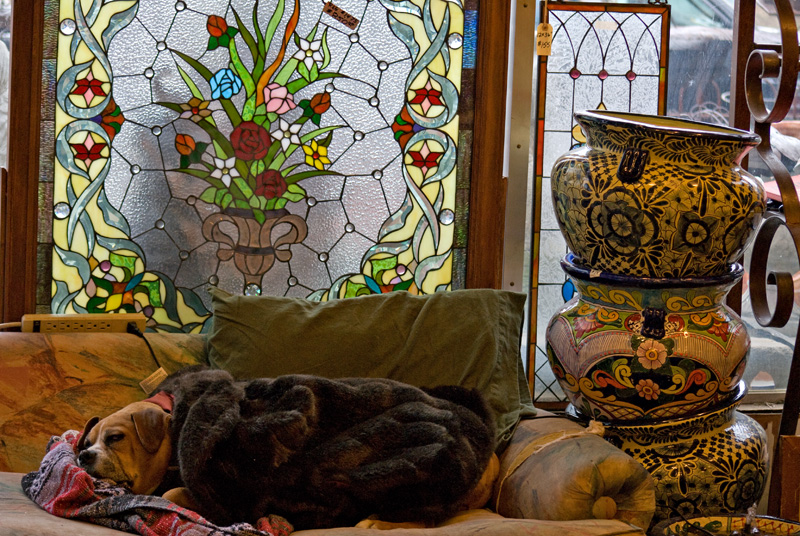 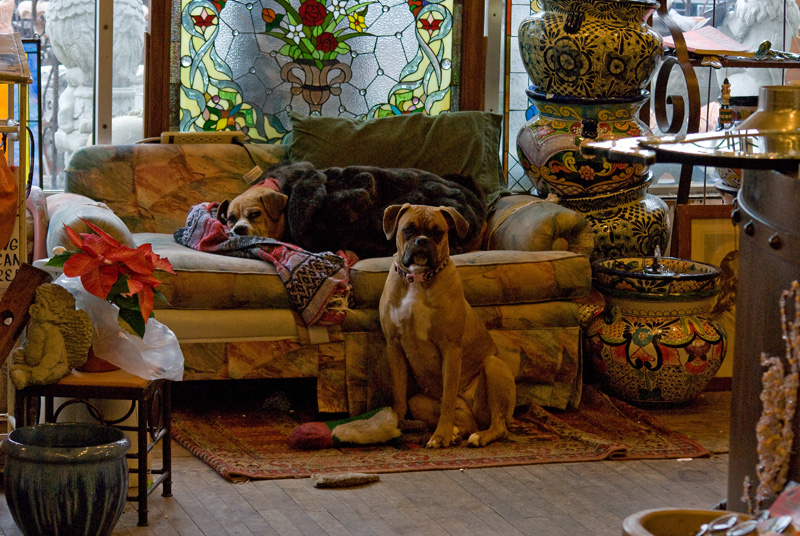 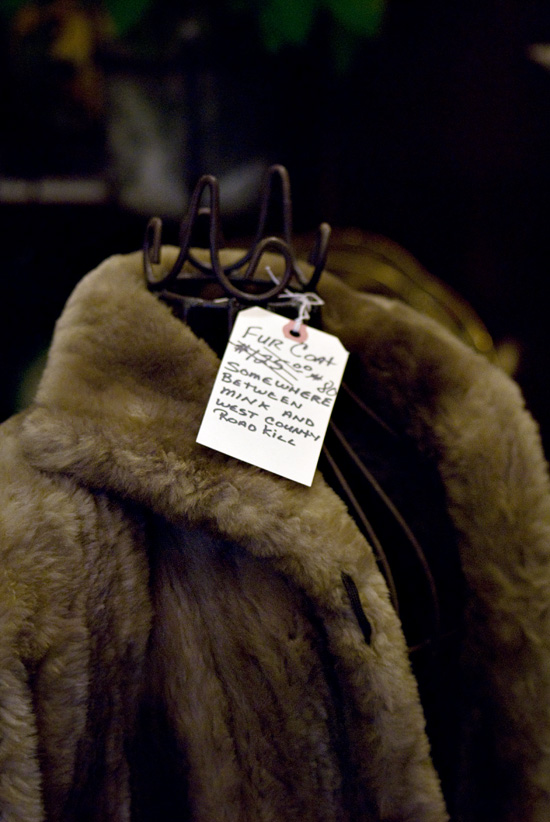 The St. Louis Zoo had an exceptional year when it came to zoo babies. As a Christmas treat, I give you the cute, the furry, the frolicking, and the fun. 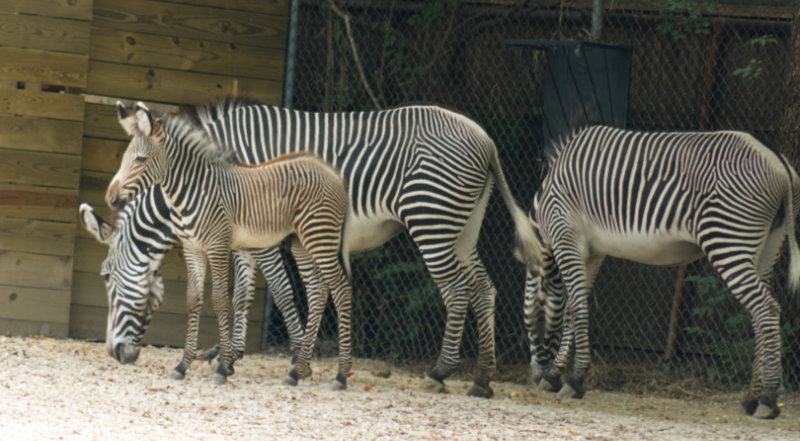 Kalama was born in August, 2008. There are now only 2,200 Grevy’s Zebras in the wild, but there’s a healthy population in zoos. The same can also be said of our next baby, a giraffe who was famous literally from birth. 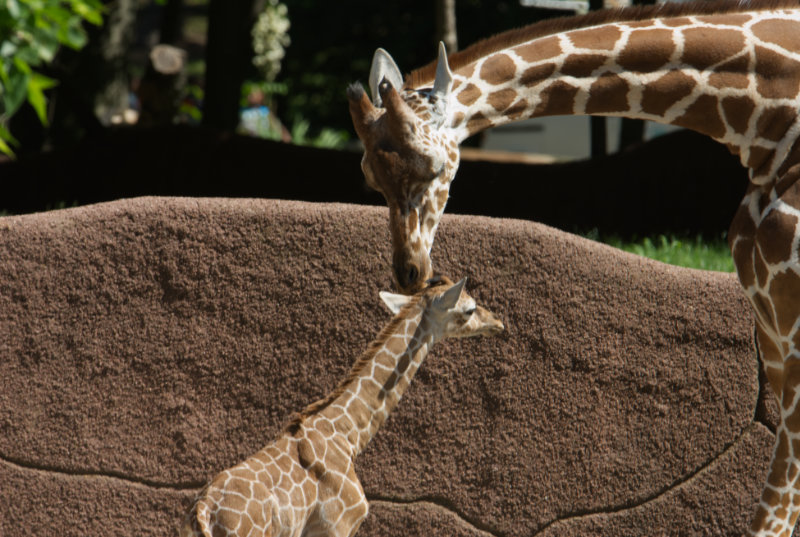 Typically giraffes will give birth in private, but not this time. This little guy was born in June, in front of an audience of hundreds. There’s even a YouTube video of his birth.

The St. Louis Zoo giraffes share an enclosure with Speke’s gazelles and the zoo’s sole ostrich. The ostrich and the baby have had a fascination each other from the beginning, and will take turns following each other around the enclosure. However, both are motivated by curiosity, not friendship, as the ostrich will peck at the giraffe, and the giraffe kick at the ostrich. However, neither hurts the other and they do seem to keep each other entertained. 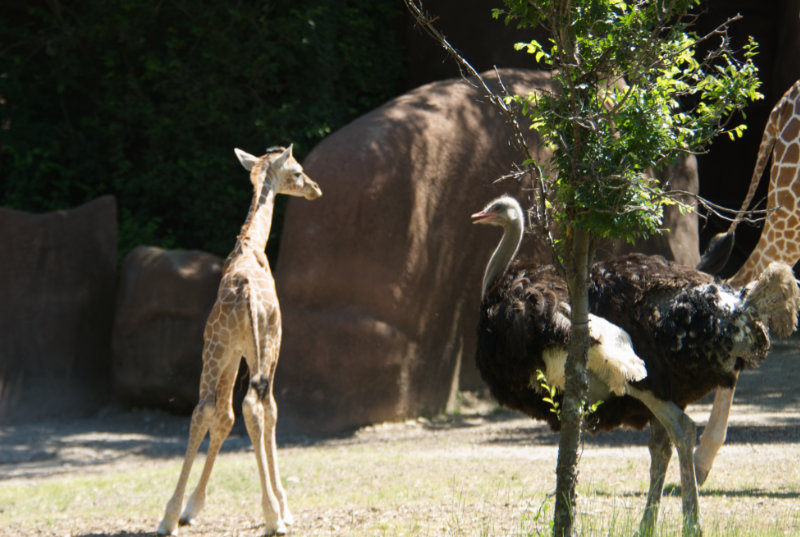 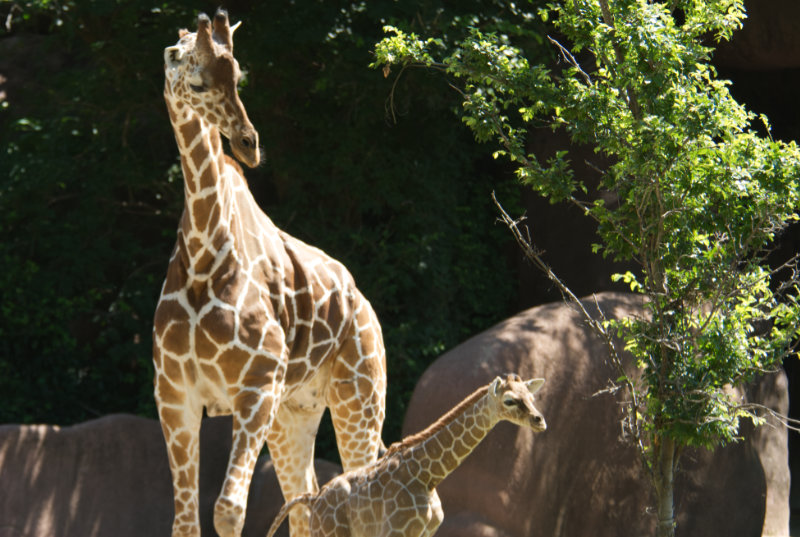 Domestic asses are common, but wild asses are critically endangered. That’s why the zoo’s breeding program is so important. And successful, too! The zoo didn’t have one Somalia Wild Ass baby this year, it had three, including this little one, born in June. 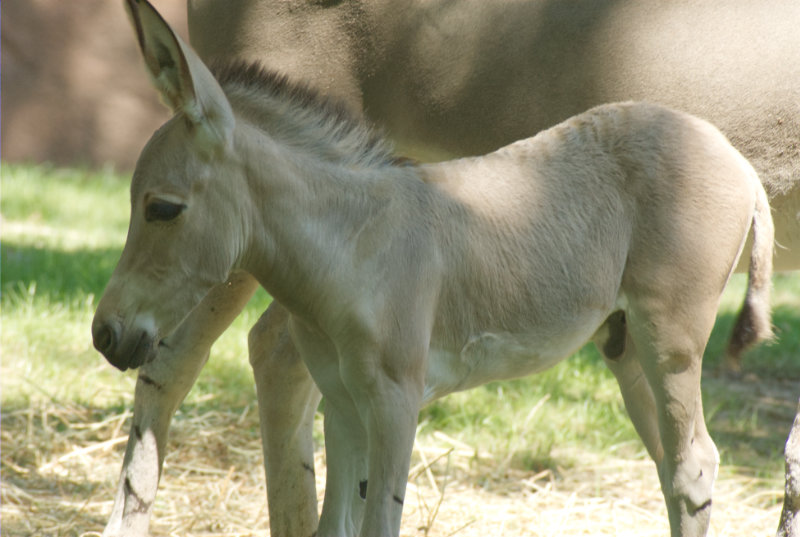 The President of the zoo, Dr. Bonner, wrote that one of the problems the zoo has with the Somalia Wild Ass is their name— leaders of school groups aren’t sure about saying their name because of the negative connotations associated with “ass”. After reading this, every time I stop by the enclosure I chant, “Say it loud, say it proud: Ass! Ass! Ass!”

I have not been kicked out of the zoo. Yet. 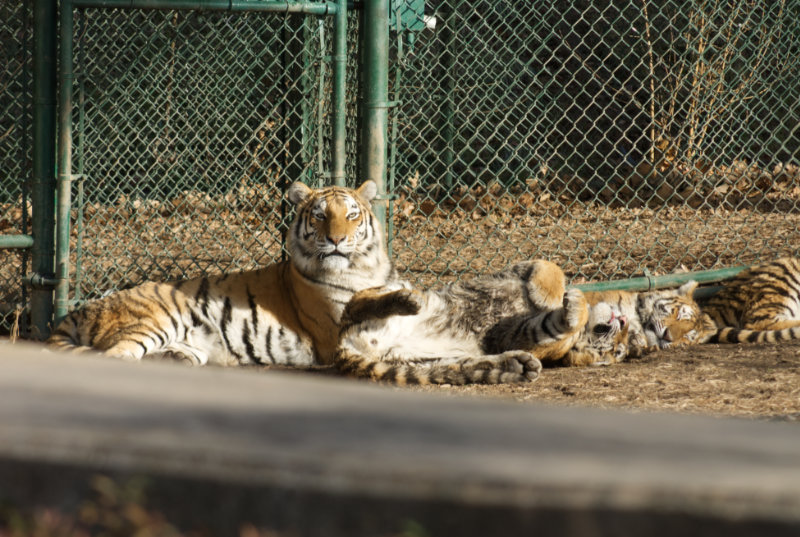 The stars this year at the zoo have been the five Amur tiger cubs born April 28, and named Peter, Ivan, Andrea, Zhanna, and Tikva. The two males and three females have consistently been a hit with the crowds, and no wonder: they’re fascinating to watch. If you’re not familiar with Amur tiger, this species was originally named the Siberian tiger. They’re the largest cat in the world, and one of the rarest, so these five babies were greeted with relief, as well as delight. 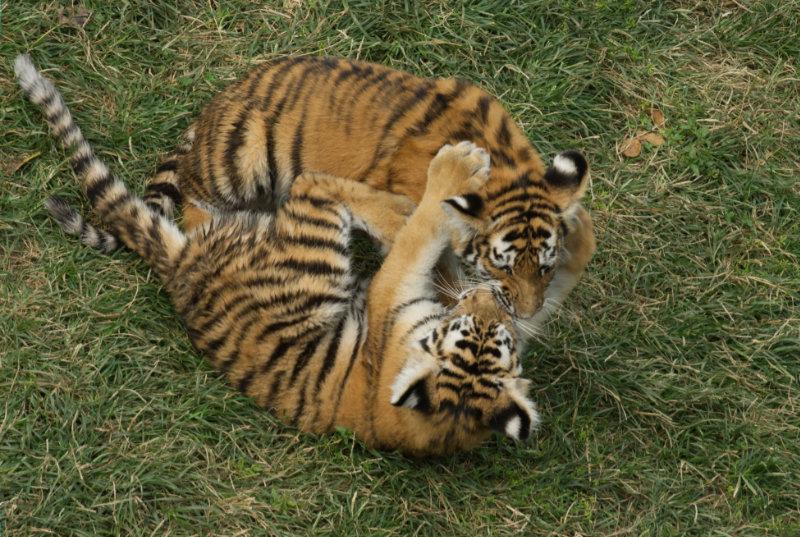 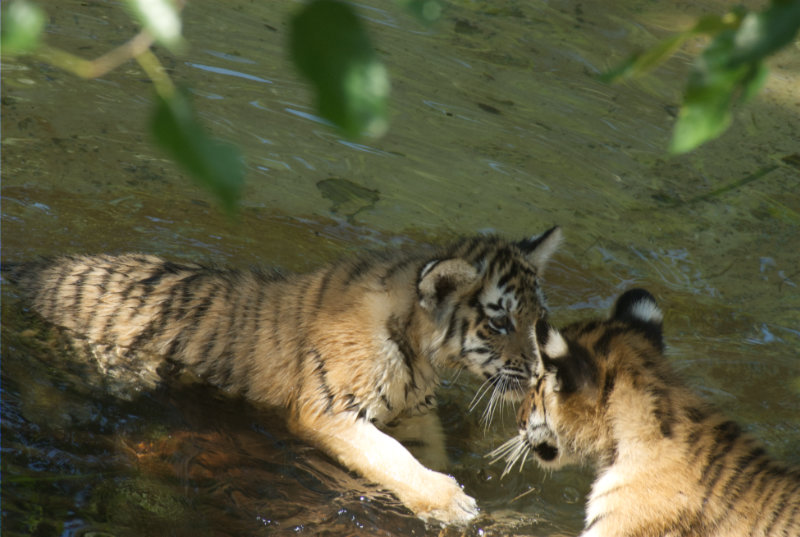 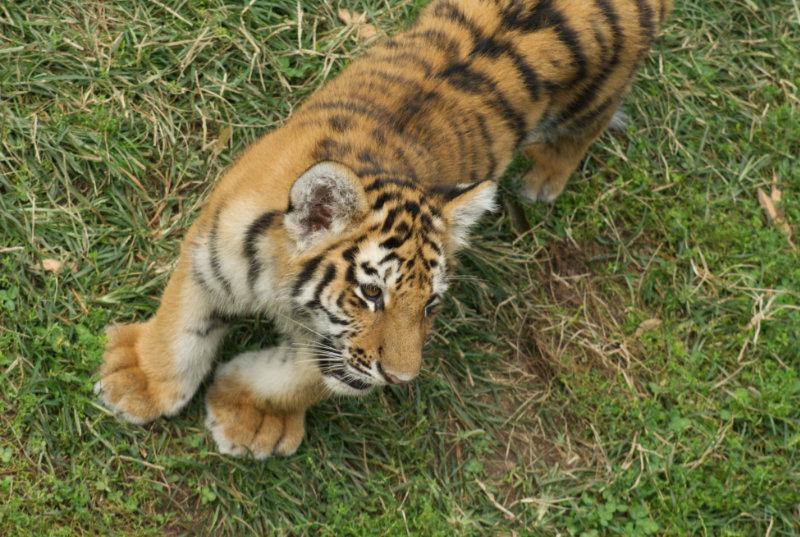 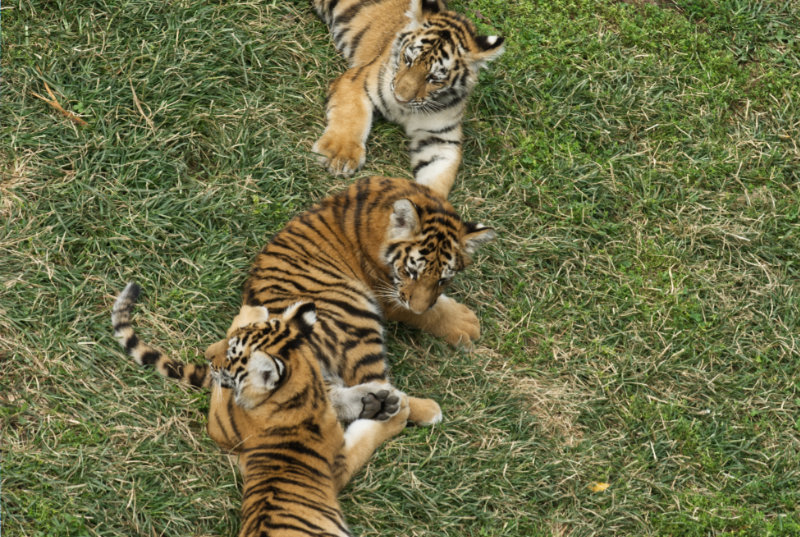 The cubs’ Mom, Kalista is a first time mother, but has proven to be exceptional— managing to care for her rather large brood with only a small assist from the veterinary staff for a couple of the lower weight cubs. 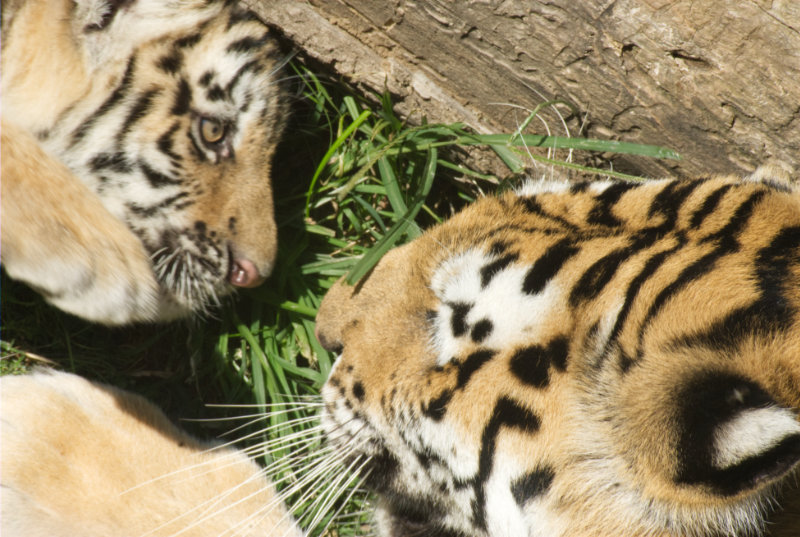 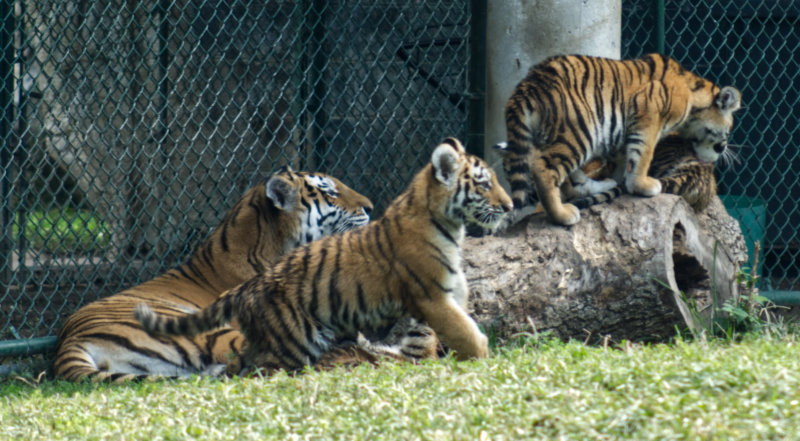 Then there’s Sofiya. Sofiya is an Amur Leopard cub, the rarest cat in the world. She was a twin, but her brother did not survive birth. In addition, first time mother, Mona, rejected her daughter, and so Sofiya was hand raised by zoo staff. 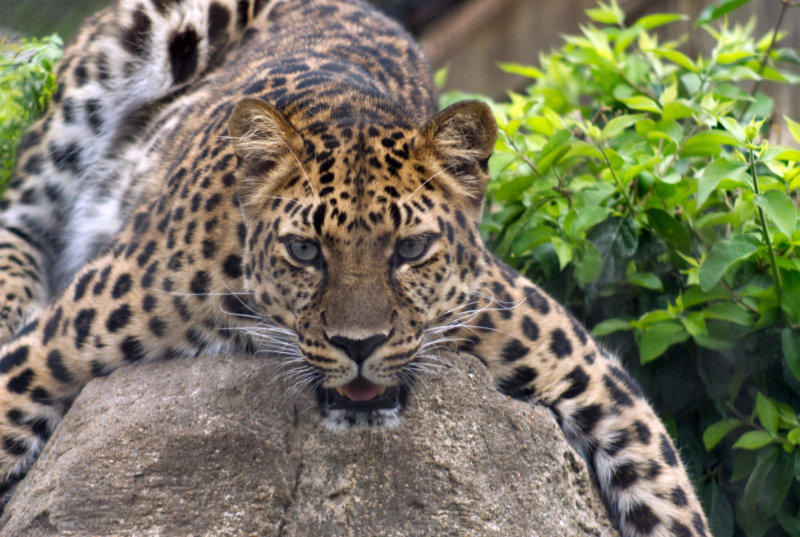 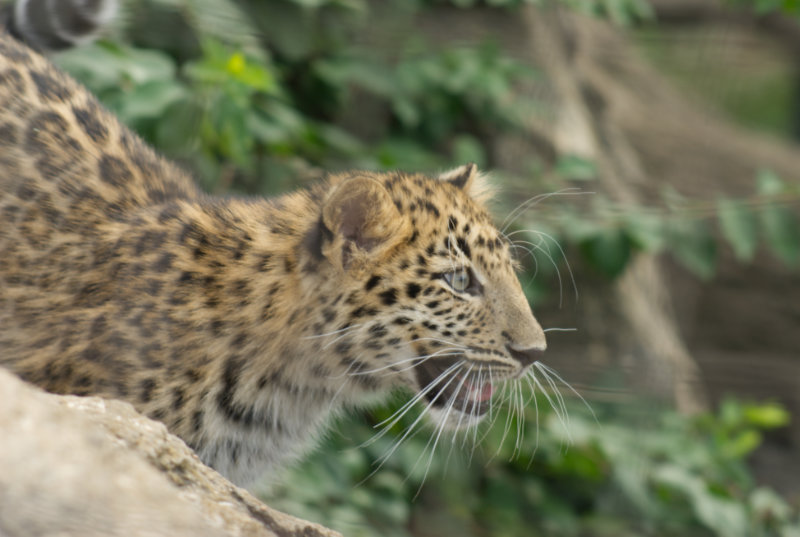 Sofiya is lovable and charming, playful and clever. She’s fearless and funny, and astute and will stalk birds flying overhead and enamored photographers with equal enthusiasm. 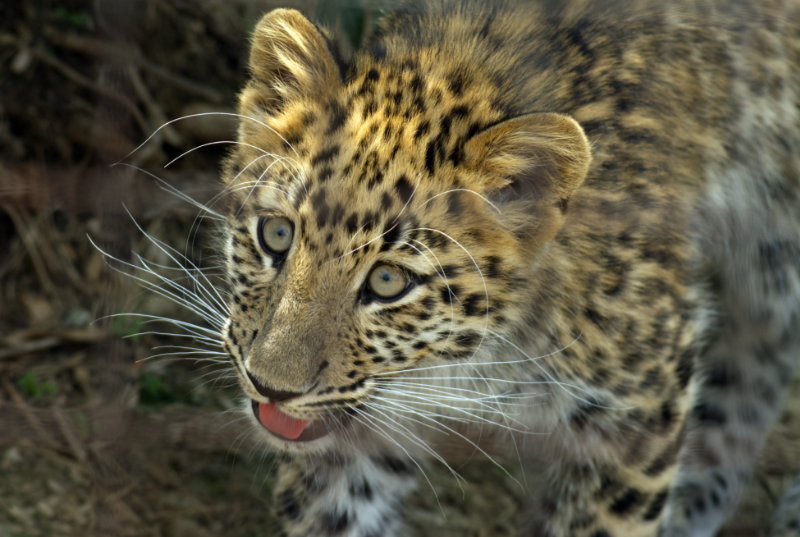 I’m somewhat chagrined to note that I’ve imbibed the Facebook Kool-Aid™. What has tipped the balance for me is the iPhone application, and the fact that many of my “meat-space” friends are on Facebook. If you’re a regular reader and are also on Facebook, look me up as David Michael Rogers. (I was playing games with Google when I created my account there more than a year ago. I’m the top hit as “Dave Rogers” on the Big G, but I wanted a lower profile on FB. If you were looking for me on Google, you’d be inclined to think I’d have the same name on FB. Or something. Anyway…)

It’s also damn convenient to post a link to an article on Facebook, and upload pictures from the iPhone, both of which I’ve been doing with some frequency. The downside is, I’m less inclined to do so here because of it.

Is this you, Dave?

I was a little surprised to read of Dave’s new enthusiasm for Facebook. Surprised and a little disappointed, because Facebook, unlike other social networking sites, prohibits access to member pages unless you, yourself, are a member, and I canceled my account months ago.

A person would have to be fairly dense not to realize that so much of discussions that once took place in weblogs now occurs elsewhere: Facebook, MySpace, Twitter, Friendfeed…the wave has moved on.

I have been putting tentative toes into both Twitter and Friendfeed, but I don’t find the activity to be terribly comfortable. I don’t think I have the gift of gay repartee, and am afraid I come across as rather dull—like a person going to a party in Silicon Valley and spending the entire time talking about RDF. However, I will keep dabbling my toes. Perhaps someday I will progress to that person who talks about HTML5 at the same parties.

Then there are those, such as Robert Scoble, who seemingly suffer at the opposite end of the social networking spectrum— following thousands and thousands and being followed by thousands and thousands in return. Such an existence, to me, would be nothing more than a constant state of noise, none of which would have any meaning in and of itself. When would a person have time for self?

A friend gave me a book, Solitude: A Return to Self, by Anthony Storr. It was first published in 1988. How fascinating it would be to see this book updated to modern times, incorporating the internet and the social networks that surround us. Storr does seem to have predicted the direction these networks would take, though.

Contemporary Western culture makes the peace of solitude difficult to attain […] Indeed, noise is so ubiquitous that many people evidently feel uncomfortable in its absense. Hence the menace of ‘Muzak’ has invaded shops, hotels, aircraft, and even elevators. Some car drivers describe driving as relaxing, simply because they are alone and temporarily unavailable to others. But the popularity of car radios and cassette players attests the widespread desire for constant auditory input; and the invention of the car telephone has ensured that drivers who install them are never out of touch to those who want to talk to them.

Nowadays we have the internet, always accessible via iPhone or other handheld device. We are never alone, never out of touch. Comforting on a dark, country road with our gas tanks hovering near empty, but what about the search for self?

Removing oneself voluntarily from one’s habitual environment promotes self-understanding and contact with those inner depths of being which elude one in the hurly-burly of day-to-day life. In the ordinary way, our sense of identity depends on interaction both with the physical world and other people. My study, lined with books, reflects my interests, confirms my identify as a writer, and reinforces my sense of what kind of person I consider myself to be. My relationships with my family, with colleagues, friends, and less intimate aquaintenances, define me as a person who holds certain views, and who may be expected to behave in ways which are predictable.

But I may come to feel that such habitually defining factors are also limiting. Suppose that I become dissatisfied with my habitual self, or feel that there are areas of experience or self-understanding which I cannot reach. One way to exploring these is to remove myself from present surroundings and see what emerges. This is not without dangers. Any form of new organization or integration within the mind has to be preceded by some degree of disorganization. No one can tell, until he has experienced it, whether or not this necessary disruption of former patterns will be succeeded by something better.

The desire for solitude as a means of escape from the pressure of ordinary life and as a way of renewal is vividly demonstrated by Admiral Bryd’s account of manning an advanced weather base in the Antarctic during the winter of 1934. He insisted on doing this alone. He admits the desire for this experience was not primarily the wish to make meteorological observations, although these constituted the ostensible reason for his solitary vigil.

Aside from the meteorological and auroral work, I had no important purpose. There was nothing of the sort. Nothing whatever, except one man’s desire to know that kind of experience to the full, to be by himself for a while and to taste peace and quiet and solitude long enough to find out how good they really are.

Today, Admiral Byrd would be expected to have a MySpace page, post frequently to Twitter, and publish photos to Flickr. Not to do so, would mark him as unsocial, at best, a Luddite at worst. Of course, as the new interview with Clay Shirky would suggest, the technology is not a problem, we only need to establish the right filters.

So, the real question is, how do we design filters that let us find our way through this particular abundance of information? And, you know, my answer to that question has been: the only group that can catalog everything is everybody. One of the reasons you see this enormous move towards social filters, as with Digg, as with del.icio.us, as with Google Reader, in a way, is simply that the scale of the problem has exceeded what professional catalogers can do. But, you know, you never hear twenty-year-olds talking about information overload because they understand the filters they’re given. You only hear, you know, forty- and fifty-year-olds taking about it, sixty-year-olds talking about because we grew up in the world of card catalogs and TV Guide. And now, all the filters we’re used to are broken and we’d like to blame it on the environment instead of admitting that we’re just, you know, we just don’t understand what’s going on.

Admiral Byrd was 46 when he staffed the meteorological base, and almost died of carbon monoxide poisoning from a faulty stove. To survive, he would have to turn off his heat, sitting alone in the dark and the cold for hours at a time, but still sending in reports while trying not to convey how desperate his situation was to prevent a dangerous mid-winter rescue. He would later write that he never regretted the experience, because it taught him appreciation of the “sheer beauty and miracle of being alive”.

My own need for solitude fits somewhere between Robert Scoble and Admiral Byrd.