I decided to visit a park in Illinois yesterday and walk the trails while my roommate rode a bike path that connected with the park. The weather was perfect: cool but sunny, and the trees just starting to turn. Most of the road to the park was by the Mississippi and it looked beautiful and blue rather than dangerous and dark.

The trail started up sharply, and then just continued. Up and up. It was difficult footing, though I’ve had worse. But I, soft and overweight from a summer made up of hot, sedentary days, began to have troubles. I would pass folks on the way and chat with each of them, holding on to their presence. At one lookout point, I talked with a younger couple, taking their photo for them; admiring their GPS device. I, who normally eschew humanity during my hikes, felt the need for contact.

I have no sense; I continued. I was passed by a couple and their two kids. The man gave me a friendly pat on the arm as he passed, as if to assure me that I will not die. As they made their way, I noticed that they would stop along the way so that I was always just a bit behind them. Eventually, at one point where the way was sharply steep, he had stopped to wait for me to give me a hand. I’ve not yet met a trail that was so much for me that I needed help, but I did yesterday. I was grateful for his help; I was grateful for the fact that they slowed their steps because of concern for me.

At the top, where the trails divided, we talked. Their names were Jan and Les and they had just moved from Florida to Missouri. I told them of many of the places to hike and walk; they told me how life was like in Florida. I told them I was going to continue with the trail marked ‘easy’, to the road for a safe trip down. They continued on the ‘moderately difficult’.

But I am stubborn. To go the easy route would take me over two miles out of my way, and I wanted to finish the walk. Half way, it connected with a quicker route down that was labeled ‘moderately difficult’. It was only 1/4 mile and I felt I could handle it.

It was a nightmare. There was no path, it had been eroded by water and was steep and uneven and difficult footing. For most of it, I walked sideways, leaning heavily on my walking stick.

I met another family on the way; again a mother, father, and two kids though these children were much younger. They seemed strained, so I knew I wasn’t the only one having problems. Oddly enough, there was a very sharp step down where I met them (most likely why they had stopped). This time, I asked for help–just a shoulder to steady on, as I made the step. I then continued down, as they continued up. Eventually the trail gave way to road and road to car and little has felt so good than the seat of that car.

Note to self: easy trails for the next two months. I can’t always depend on a handy shoulder being nearby.

I don’t really have many pictures from the trip. On the way, there was a cave system that we stopped at, and was able to get one photo I liked. 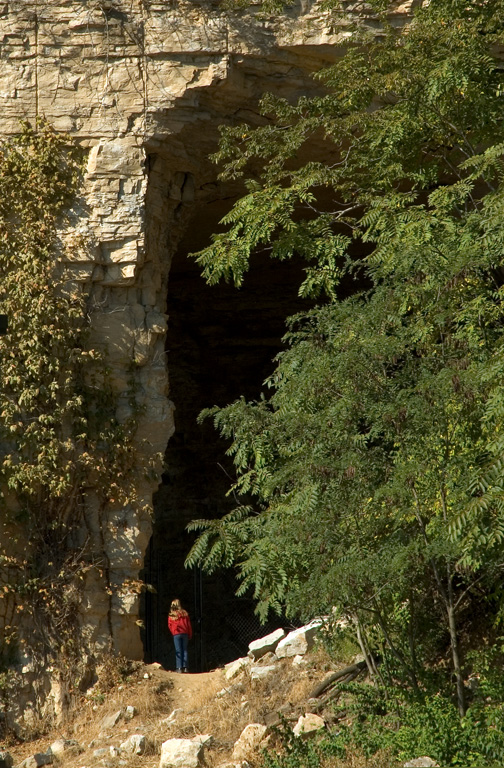