I have come to love this state: the beautiful scenery on my walks, the state’s role in so many important historical events, and the people who will chat with you at a hot air balloon show or on the trail. But this state has a darker side, the beast if you will, and I’ve been seeing it more and more since the election in November.

This week sees the KKK triumphant when the Supreme Court would not intervene in this organizations desire to be part of the highway cleanup program. Based on this decision, the only way the state can avoid allowing the Klan into the program is drop it, something it is considering. Not only Missouri, but ten other states are considering this as well.

The adopt-a-highway program has been the single most successful approach to keeping our highways clean, and if we lose this, we go back to a day when we get to drive through miles and miles of garbage. I think giving up the program is bad, as well as giving this group too much power. I say to the Highway Department, let the Klan put up their sign, and we should leave it as is – on a patch of highway called Martin Luther King Jr. Highway.

Still, having this sign in that part of the state is an intimidation factor. I’ve long thought that if I were black, and I had to drive past the various Confederate flags hanging at houses along the way to the Johnson Shut-Ins, I would think twice. Now, seeing this sign in addition to the flags, would a black person feel welcome and safe in this park? Let’s face it: would any of us feel comfortable, or safe.

Add to this a second news item, this one about the Metro Link pulling ads for a white separatist group that had been running in the trains. The ads themselves aren’t offensive – basically providing a link to the site’s web page. But the group is the National Alliance, a leading neo-Nazi group with, according to the paper, a ..relatively large and active membership in St. Louis.

I guess I shouldn’t be surprised; not when you consider the people of this state elected a 34 year old poster child for the neo-conservative movement, as governor. A governor whose first act was to gut the Department of Natural Resources–that pesky agency that keeps the corporations such as Monsanto under some environmental control in this state. Of course, this could give me something to look forward to…tripping through the forest in the future, trying to see how many plant mutations exist because of uncontrolled runoff from plants and experimental orchards flowing into our waterways.

Maybe all of this is the writing on the wall. I have been considering the possibility of moving from St. Louis, not the least because most of the jobs in IT here are J2EE. It’s been so long since I’ve done anything with Java, much less J2EE that I’m not sure I could even write a program within either the language or framework anymore. And its hard to hide the fact that you’ve come to despise the technology if you’re working in it eight hours a day.

Thinking about where to go though is not something that fills me with enthusiasm. There is the fact that I have come to really feel at home here in Missouri, white racists excluded. And I’ve lived in so many places: Seattle, Portland, San Francisco, Phoenix, Salt Lake City, Grand Isle in Vermont, Boston, and other places. The heavy areas of technology are in the coastal areas, so these seem like a natural destination. In fact, if we account for IT concentrations, the following is how the United States should really look. 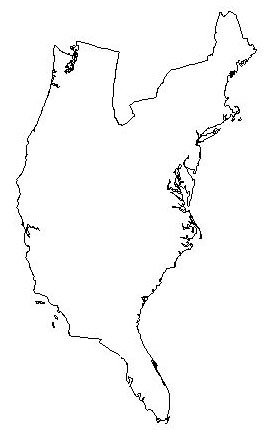 Come to think of it, that’s how the US looks from a weblogging perspective at times, too. Interesting distortion. Looks a little like New Hampshire’s Old Man on the Mountain. Before the fall, of course.