For decades, government policies have allowed large amounts of underbrush and small trees to collect at the base of our forests. The motivations of this approach were good. But our failure to maintain the forests has had dangerous consequences and devastating consequences. The uncontrolled growth, left by years of neglect, chokes off nutrients from trees and provides a breeding ground for insects and disease.
…
The new law directs courts to consider the long-term risks that could result if thinning projects are delayed. And that’s an important reform, and I want to thank you all for that. It places reasonable time limits on litigation after the public has had an opportunity to comment and a decision has been made. You see, no longer will essential forest health projects be delayed by lawsuits that drag on year after year after year.

Despite the Bush administration’s disingenuous rhetoric about ‘thinning underbrush,’ the Forest Service really focuses the vast majority of its projects on the removal of economically valuable mature and old-growth trees. The sale of such timber pads the agency’s budget, creating a bureaucratic incentive for mismanagement.

The problem with this is that while the removal of mature trees severely degrades wildlife habitat, such logging also increases the risk of severe fires by reducing the forest canopy, creating hotter, drier conditions on the ground. Also, the increased sunlight reaching the forest floor causes more rapid growth of flammable brush and shrubs.

Essentially, the Forest Service is removing the largest, most fire-resistant structural elements of the forest-the large trees with their thick bark-and leaving behind the smallest, most flammable material.

A century of intense logging in National Forests has not prevented severe fire conditions: it has created them. 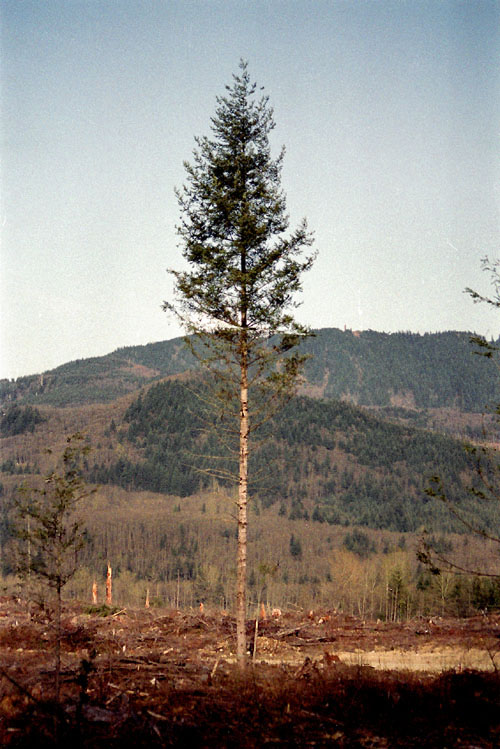 Report from a Forest Logged by
the Weyerhaeuser Company

Three square miles clear-cut.
Now only the facts matter:
The heaps of gray-splintered rubble,
The churned-up duff, the roots, the bulldozed slash,
The silence,

And beyond the ninth hummock
(All of them pitched sideways like wrecked houses)
A creek still running somewhere, bridged and dammed
By cracked branches.
No birdsong. Not one note.

And this is April, a sunlit morning.
Nothing but facts. Wedges like half-moons
Fallen where saws cut over and under them
Bear ninety or more rings.
A trillium gapes at so much light

Among the living: a bent huckleberry,
A patch of salal, a wasp,
And now, making a mistake about me,
Two brown-and-black butterflies landing
For a moment on my boot.

Among the dead: thousands of fir seedlings
A foot high, planted ten feet apart,
Parched brown for lack of the usual free rain,
Two buckshot beer cans, and overhead,
A vulture big as an eagle.

Selective logging, they say, we’ll take three miles,
It’s good for the bears and deer, they say,
More brush and berries sooner or later,
We’re thinking about the future-if you’re in it
With us, they say. It’s a comfort to say

They’ve managed this to a fare-thee-well.

(Thanks to Loren for poem.)