The first image is “One of the Family”, by Frederick Cotman, painted in 1880.

The second image shows the same painting, but this time in black and white from a magazine page. This second image is coated with ink marks, stains, and other signs of wear. The reason why is my mother used this painting as inspiration for the only pen and ink drawings she’s ever done.

I happen to have the first, and the best of her pen and inks, in image three. Mom gave it to Dad, who passed it on to me when he went into assisted living.

Mom took some liberties with interpreting the original artwork. For one, the father figure was dropped from her work. I’m not sure if it’s because Mom thought the he was extraneous for the work, or she was making a symbolic choice reflecting her ambivalence about the men in her life.

The rest of the images are of Mom’s pen and ink. I thought I would provide some detail. It took quite a bit of time to scratch this piece out. 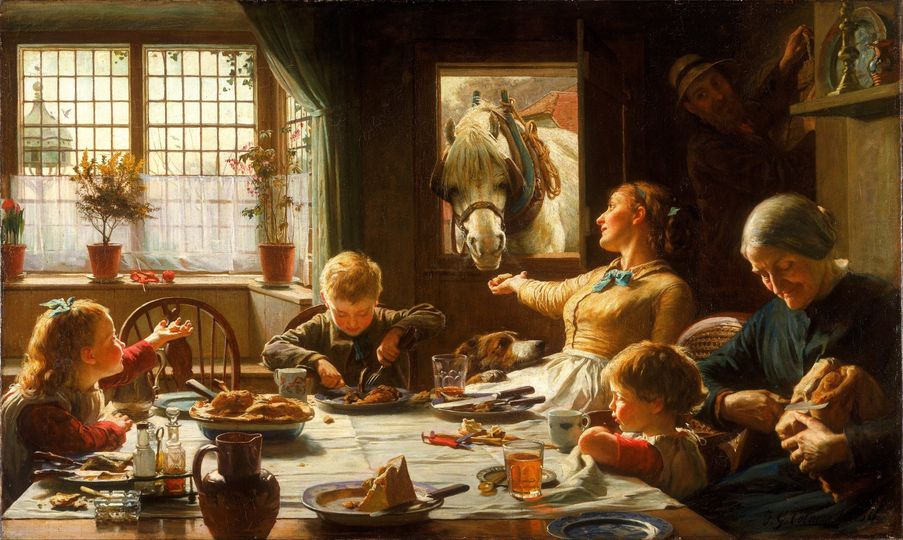 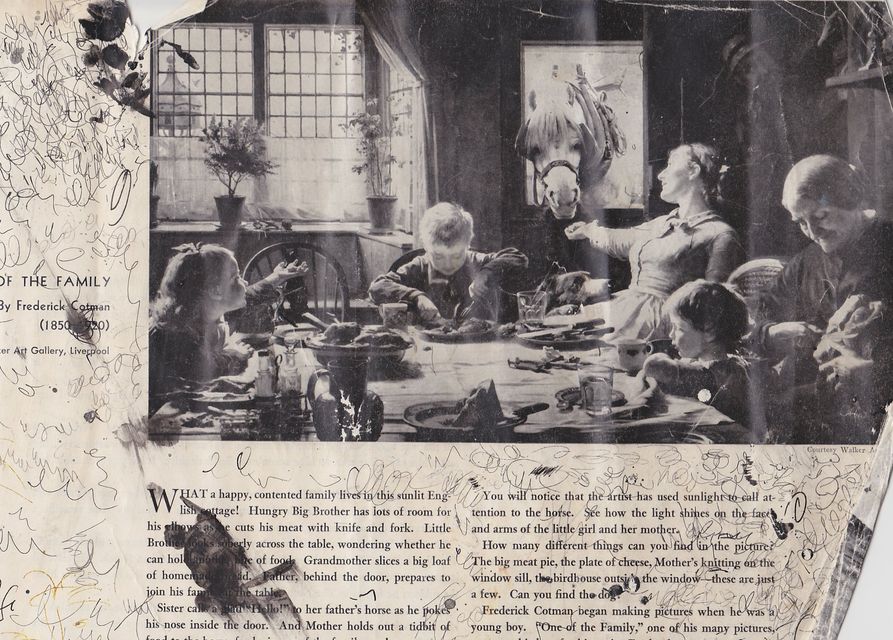 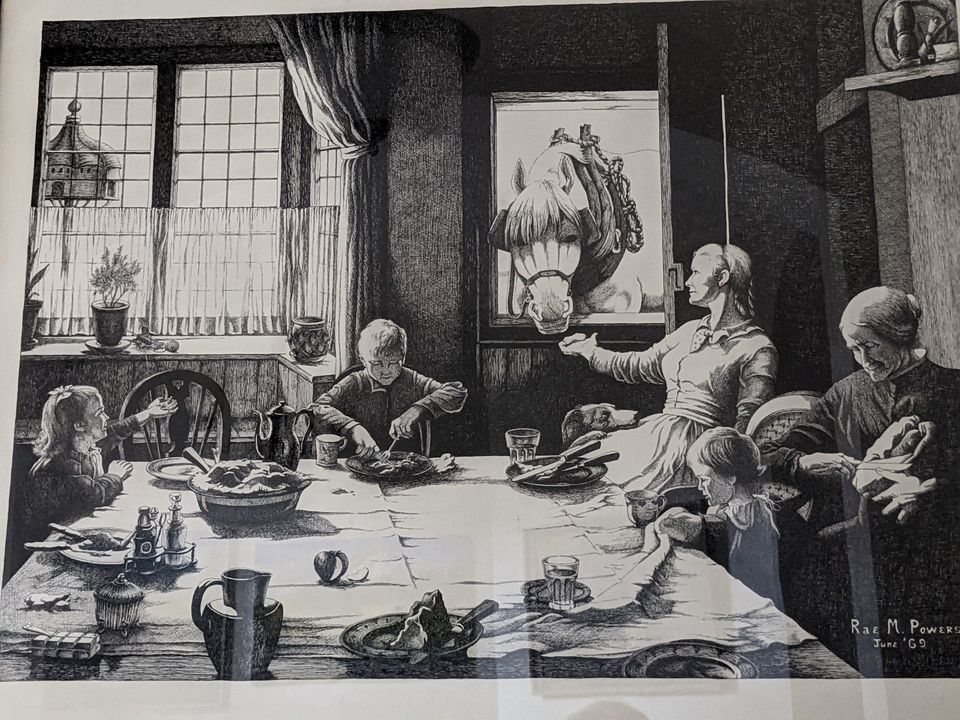 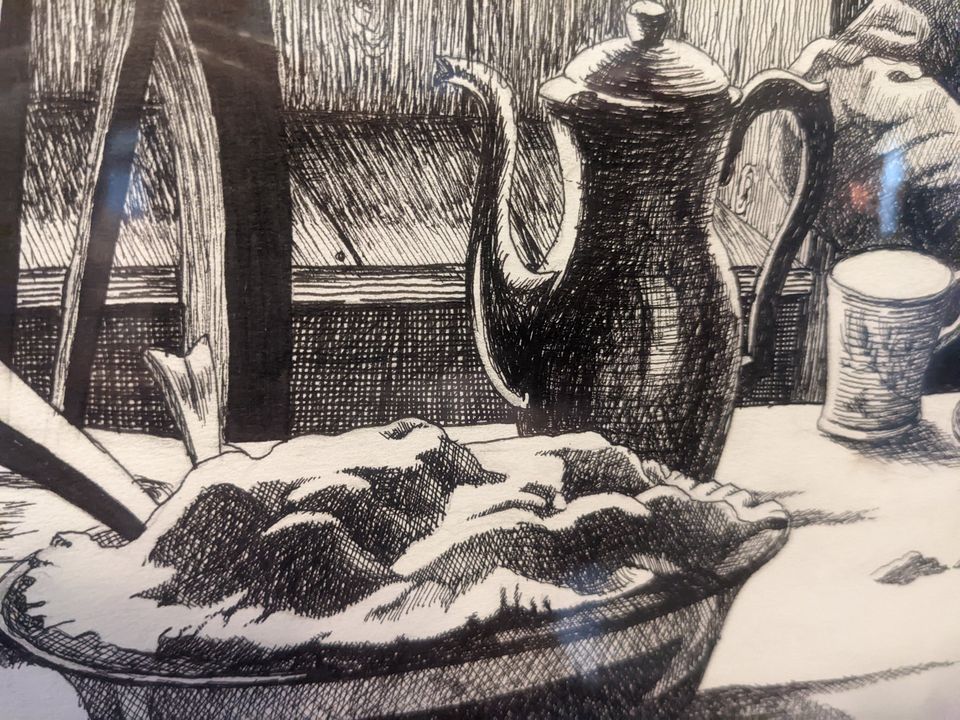 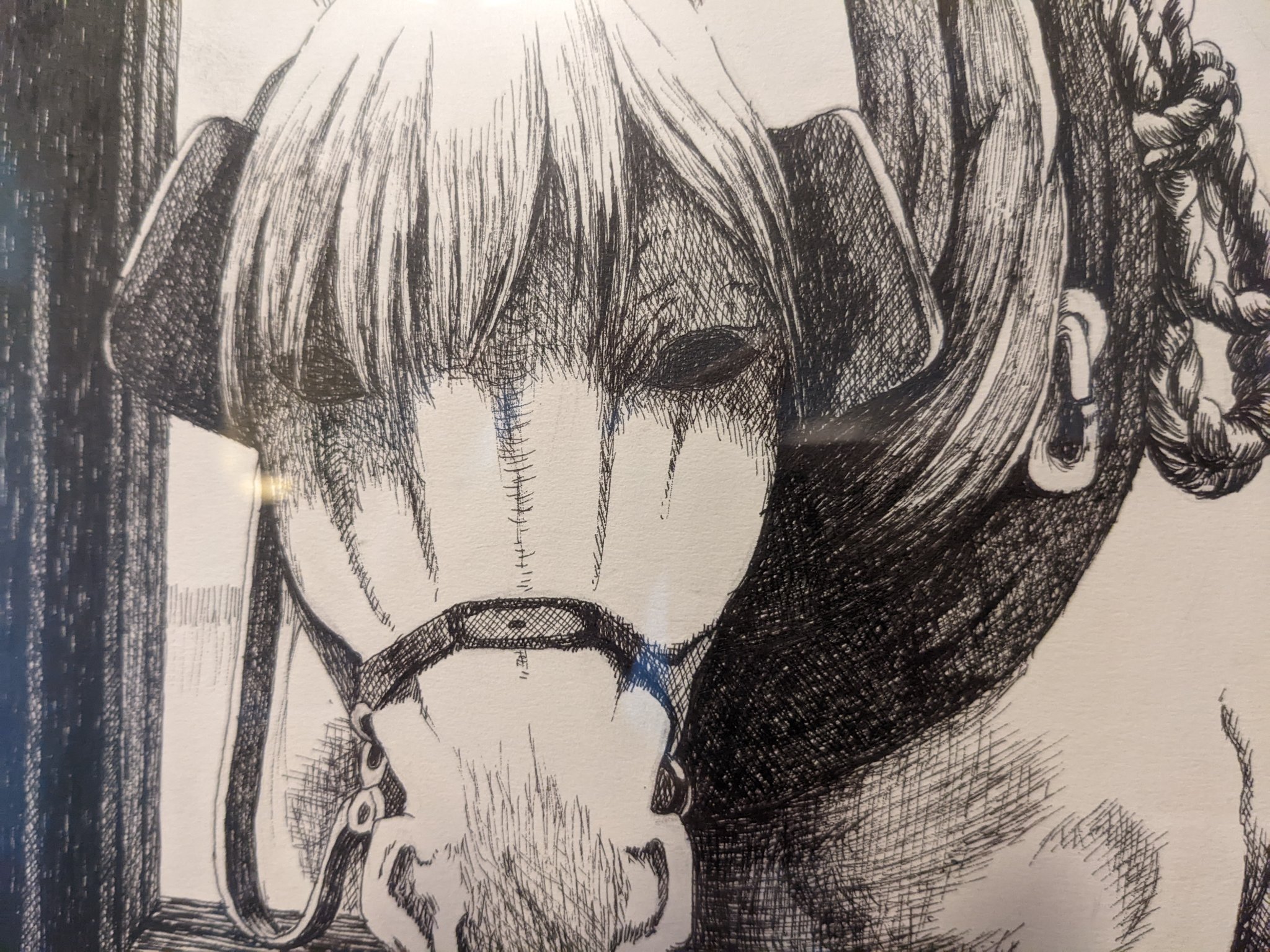 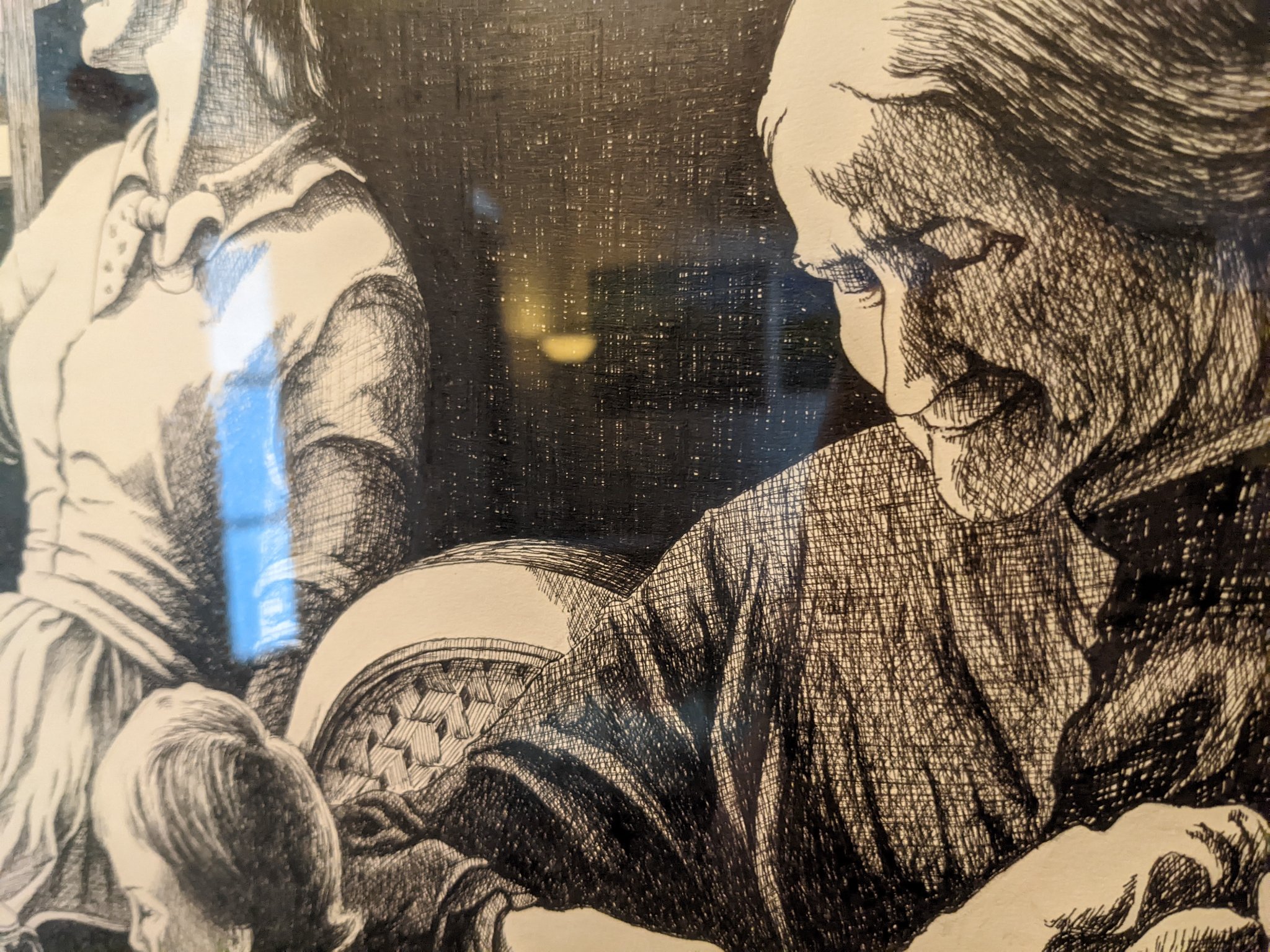 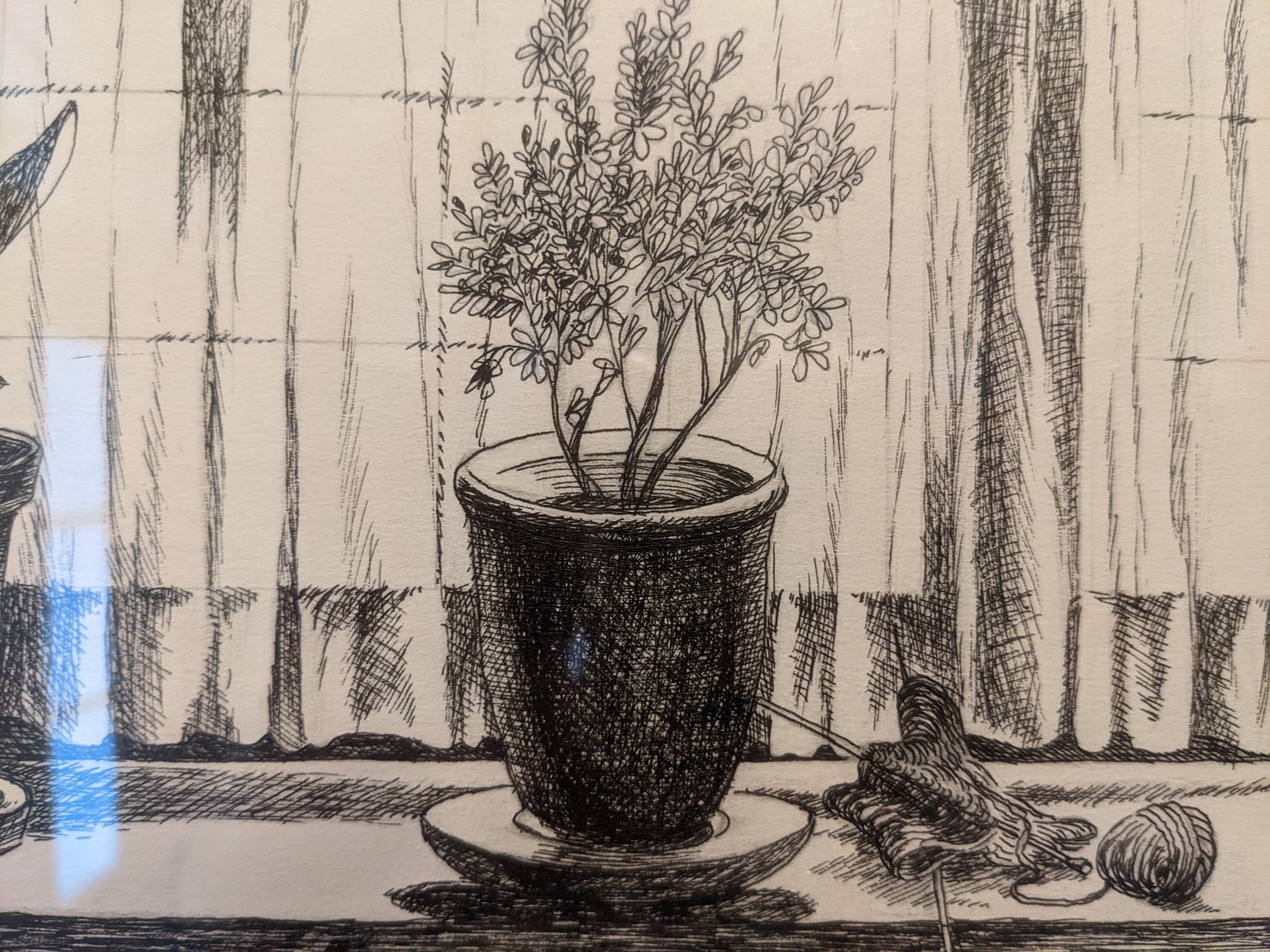 I don’t know that I agree with Nick Carr’s assessment that the Bebo deal is equivalent to sharecropping. Anyone who contributes anything to any social networking site should be aware that what they contribute will eventually be monetized in some way by the site owner. In other words, if you want to give it away for free so that others profit, I don’t necessarily have a lot of sympathy.

I did like what Broadstuff had to say on the issue, though.

A good rule of thumb with the mass Tech Media is that when such howls of outrage are heard, the howlee is generally onto something. And what Bragg is articulating in essence is this simple thought – the only real difference between the New Music Aggregators and the (automatically despised) Olde Aggregators is that the Olde Industry actually paid the artists something.

That, in a nutshell, is the bottom line on this discussion. It’s not whether the artists knew they weren’t going to get paid or not, but the fact that we hold social networks like Bebo up to high acclaim while sneering at the old record companies, when both groups profit from the efforts of the artist. However, it is only the old companies, those badies, that actually pay for music. Even if the payment is considered miniscule, it is pay and is a whole more than you’ll ever get for your efforts at Bebo or any other site that promises you “fame”.

The intrinsic value of fame on Bebo aside, I am irked to see this discussion used, yet again, for the cry that all art demands to be free and that artists should be happy with getting attention. If artists want to pay the rent or buy food, then they should get a “real” job, and quit whining because people download their stuff for free.

According to people like Michael Arrington all recorded music should be given away for free, and artists make their only income from concerts. If they can’t make their living from concerts, or busking for tossed dimes in the subway, than they should consider music to be their hobby, and get a job digging ditches.

Of course, if we apply the Arrington model to the music industry, we should be able to download all the songs we want–as long as we’re willing to sit through an ad at the beginning and in the middle of every song. Isn’t that how Techcrunch makes money? Ads in the sidebar, taking time to download, hanging up the page. Ads at the bottom of the posts we have to scroll past to get to comments? And in between, loud, cacophonous noise?

It angers me how little value people in this online environment hold the act of creativity. Oh we point to Nine Inch Nails and Cory Doctorow as examples of people who give their work away for free but still make a living. Yet NIN levies an existing fame, selling platinum packages at several hundred a pop to make up for all the freebies, and Doctorow has BoingBoing as a nice cushion for the lean years. They bring “fame” to the mix, and according to the new online business models, you have to play the game, leverage the system if you really want to make a living from your work. We don’t value the work, we value the fame, yet fame doesn’t necessarily come from any act of true creativity.

All you have to do to generate fame nowadays is be controversial enough, say enough that’s outrageous, connect up with the right people in the beginning and then kick them aside when you’re on top to be successful. You don’t have to have artistic talent, create for the ages, or even create at all–just play the game. If you do it right, you get Techcrunch. If you do it wrong, there’s the ditch.

Though I may not agree completely with what Nick wrote in the previously linked post, I agree wholeheartedly to what he wrote in a follow-up post, written in response to Arrington’s statement, Recorded music is nothing but marketing material to drive awareness of an artist.

In the fallen world of the social network, “awareness” is the highest, most noble accomplishment that anyone could possibly aspire to. Because, you see, “awareness” is a monetizable commodity.

In a world where the only measure of success is attention, can anyone truly be great?

I went to the Body Worlds exhibit at the St. Louis Science Center today. If you’ve not heard of this, it’s an exhibit of preserved human bodies formed into shapes to best demonstrate the human anatomy.

The human bodies are without skin, so that the muscle, bone, tendons, organs show. Believe me when I say that there is nothing at all gross about the exhibit. On the contrary, it was all rather fascinating. Our bodies are incredibly sophisticated machines, and the exhibits were a celebration of our wonderful sophistication.

In addition to the staged human bodies, the show also featured cross sections and preserved organs, both diseased and healthy. Another interesting type of display was the vein work sculptures, displaying only the veins.

What was terrible, though, is that I had the strongest craving for beef jerky during the show. I confessed my hunger to my roommate, and he said that he had the same craving. As we were leaving, we could hear the people behind us, debating where to go to lunch because they were starved.

There was something very Freudian about all of this.

As for whether the show was purely entertainment, most of the show is devoted to a closer look at organs, including those diseased, as compared to healthy. Displays of lungs damaged by smoking, livers damaged by drinking, and one cross section display of an obese man with diagrams detailing of the damage to his body based on his weight–including a cross section of the pacemaker he wore–were juxtaposed with bodies seemingly in the peak of health and vitality.

Was the work educational?

One elderly woman wearing a camel colored coat, and a hat with a little feather was talking with three kids who part of a school tour group. Their discussion was occurring over an exhibit of hip bones, including one demonstrating a hip replacement. Evidently, the kids had been at the display, looking at the hip replacement when the lady heard them talking. She started telling them about her own hip replacement, her mobility before and after, answering their questions. The small group of four were so intent, they were completely unaware of the kids’ chaperons, patiently waiting for them to finish so they could move on.

Was the work art? Art is, as always, in the eye of the beholder.