Update Unfortunately, there was one levee outside of Winfield we couldn’t save.

second update Steve Ley, one of the two men in the photograph in the post, also wrote of today’s experience.

third update The Salvation Army has set up a localized fund to help flood victims in Missouri.

I wish I could say I acquitted myself well sandbagging today, but I really was a wuss.

I arrived at the high school in Winfield a little after 2 to find a bustling sandbagging operation underway. However, rather than dig in, we new volunteers had to wait in line to get a badge with picture. After over half an hour standing in the sun, the powers that be evidently decided they were in danger of losing volunteers because they let those who had ID start work.

Later, I found that the place did have prisoners from a local prison helping, so I’m assuming the security was related to them. Otherwise, our country has gotten a little too paranoid if we’re worried about protecting piles of dirt.

I partnered immediately with a man who was on his second day of sandbagging and a young woman (Breanna, who said hi in comments) who lived in the local area, both of whom had extraordinary energy, as well as being enjoyable to be around. I didn’t get a picture of the man, but I did Breanna. Behind her were twins who also partnered with us when they weren’t hauling bags to pallets. 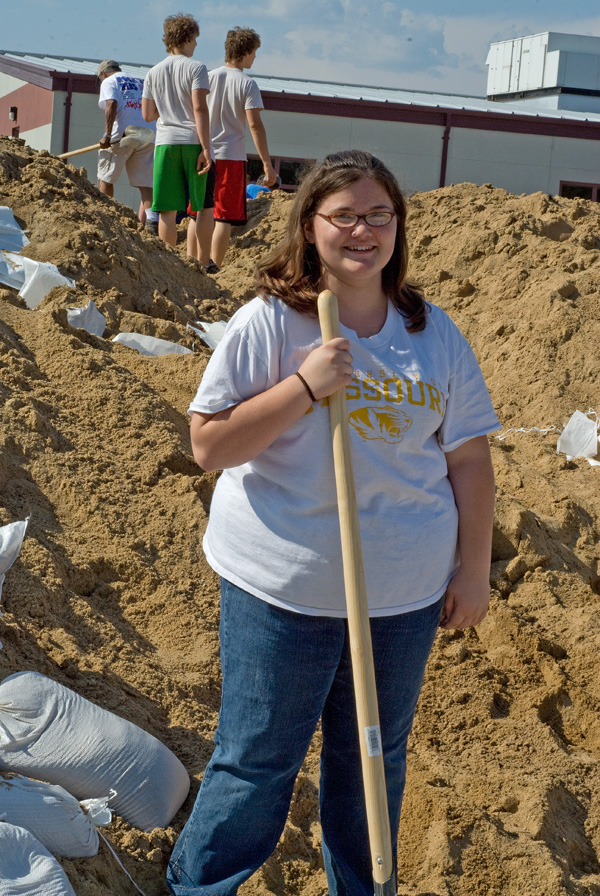 Next to us were two gentlemen who also had come up from St. Louis, Dogtown to be exact. They were a great deal of fun, and we found that we shared a lot in common, including careers in tech, and possibly even people who we mutually knew in the tech/online world. Talk about small world. I also think they bagged about 10 bags for every one I helped fill. Still, I like to think that there’s a levee somewhere, just about to fail when one last sandbag is placed on the top, keeping that last drop of water out. And I’ll have filled that bag.

Well, maybe I am being a tad fanciful. 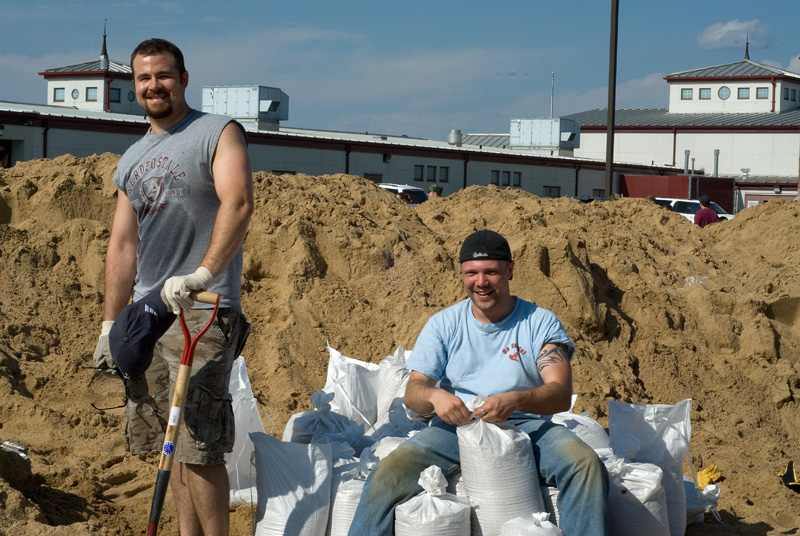 Following is a wider view of the operation. As you can see from the mounds of sandbags, people came to work, and work they did. 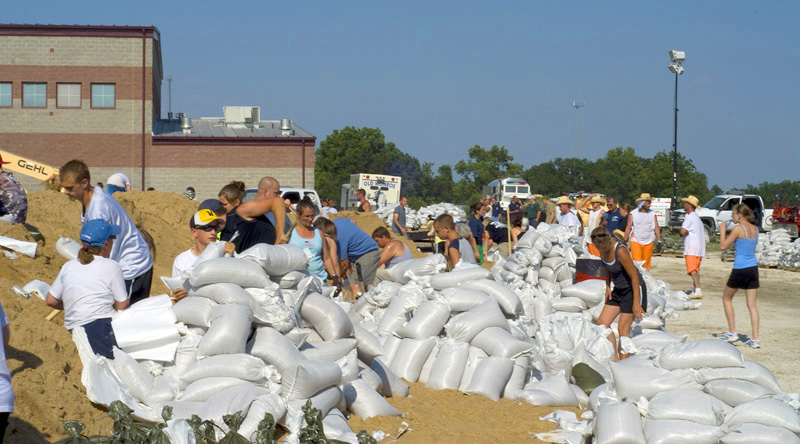 Tonight I’m sunburned, with a headache that just won’t go away. However, I think I can drag my butt out tomorrow, early in the morning this time, and see if I can’t fill that last bag that saves that last levee.

I know you’re broke, I’m broke, we’re all broke and gas and food prices are horrid, but if you can see your way to dropping a few dollars into the Red Cross bin, you’d be helping a lot of people who have lost everything.

If the Red Cross is not your bag, and you want to help a more local organization, the Missouri Humane Society is known nationally for its pet recovery and sanctuary during weather events such as floods. The organization was in Iowa rescuing pets, and now is working to help people in Illinois and Missouri not only by actively rescuing pets trapped in the floods, but also by taking in pets for those who have no place to keep them.

If you can find your way to help out a little, I promise I’ll bag more sand. I’ll even name a bag after you. Who knows, maybe yours will be the bag that stopped the drop of water that saved the levee that saved the town.

The Christian Science Monitor has a good article on the effects of global warming in six different countries, including Indonesia. One aspect of global warming in that country is the aggressive nature of deforestation in order to grow palm trees for palm oil for biofuel.

I am not in favor of biofuels. They do not address the problems, which is to make more efficient machinery, depend more on solar energy, and frankly, do with less. Instead, people can now have their SUVs and drive them, too, by planting corn in their tanks.

We had an issue with biofuels in this state in that one company wanted to build a corn biofuel plant using water tapped from one of Missouri’s precious non-replenishing aquifers. When asked what he would do if the plant sucked the aquifer dry, the owner just stated he would have to deal with the situation. Of course, he neglects to mention about how everyone who lives around the plant would also have to deal with the situation.

What about turning corn into biofuel? Most of the surplus corn grown in the US is sent to countries where the people are suffering drought and famine. When the corn is diverted to fuel, starvation results.

I now read that a Canadian company is building a biofuel plant here in Missouri, to make fuel from wood scraps. This sounds commendable: use scrap wood to create cleaner biofuels. However, what is never mentioned in these stories is that all biofuel production requires a great deal of water, and can have serious consequences on the land surrounding such plants.

Missouri is attractive to biofuel producers like Oregon and Washington are attractive to companies wanting to install computer server plants: we have a seemingly abundant supply of the natural resource they need. In the northwest, it’s electricity; here in Missouri, it’s water. However, as we’ve seen in Georgia, there is no guarantee that the water we have in the ground today, will be there tomorrow.

Ultimately, I don’t agree with the use of biofuels. Their use postpones the decisions we will inevitably have to make as to lifestyle; they gloss over the real issues facing the world; and they let the greedy continue their wasteful ways of life. More than that, we don’t need more industry profiting from our natural resources.

The area near Rocheport put out a request for volunteers to begin sandbagging. I had to take Zoe into vet today and couldn’t go. To be honest, I doubt I’d be able to keep up for that long, anyway. I can lift 50 pounds without a problem. I doubt I could do it for hours at a time.

There’s a very calm and controlled attitude about the coming “Wave of Water” as it’s being called. Some communities are vulnerable, and these are being evacuated and sandbagged. However, after the 1993 flood, this state learned its lesson. Many of the homes that were in bottom land or flood prone areas were bought out and turned into open areas where flooding won’t be a problem. Levees were raised, and floodwalls and gates installed in other areas. We could hit close to the 1993 levels on the Missouri but have no where near the damage. Water will overrun highways in certain areas, but business and homes should, for the most part, be safe. Unfortunately, crop land is going to be impacted. I would hate to be a farmer this year.

However, if we get to a certain level, and it’s borderline whether we’ll get to that level, larger communities such as St. Charles do run a real risk of extensive flood damage.

The Missouri and other rivers rising to flood levels are enough to impact the Mississippi, but it shouldn’t rise to a risk level–no more than moderate flood level, which isn’t that unusual. The levees and the floodwalls should be enough to contain it.

Our home is inland, and the only thing that could threaten it is if the Mississippi rises to the ’93 levels. Water levels that high would send water into the River Des Peres drainage channel and that could pose a real risk to our area. However, that’s not a threat with the current expected levels.

In the next few days, I’m going to try and get some photos of the rising waters, though I may run into road blocks. However, there’s so many areas where one can get close to the rivers that I doubt all will be blocked. I’ve not seen the Missouri or Mississippi at flood levels. They’re such magnificent rivers anyway, I can’t imagine how they’ll be 10 or more feet above their normal levels.