Cynthia Shelly released an alternative proposed HTML5 draft that addresses the table summary attribute. The responses to her draft have been less than edifying, and demonstrate rather succinctly most things wrong with the HTML WG.

If you follow along in the thread, you’ll see Apple’s Maciej and IBM’s Sam Ruby go back and forth on protocol, a discussion Maciej ends with a suggestion to focus on salvaging a “proposal” from the work. The thing is, providing alternative text in a specification is the proposal, the only that is deemed acceptable to the HTML WG. At least, that’s what we’ve been told in the past.

Not that Cynthia is demanding that the text be used as is. This was a suggested text, addressing how summary could be discussed in the HTML5 specification, in order to ensure proper use. The proposal also removes summary from the obsolete list. Cynthia proposed this alternative text in order to generate discussion, leading to its refinement; to encourage team effort. Simple enough to understand, but then we’re subjected to the typical Ian Hickson disingenuous approach to anything he disagrees with: pretend he doesn’t understand what the proposal is all about.

I couldn’t find any description of what problem this proposal is trying to solve. Could you point me to the description of the issue that is being resolved here? Why is the text currently in the HTML5 spec not considered acceptable middle ground?

It is difficult to evaluate proposals without understanding what problems they are trying to solve.

Incidentally, I believe the process that we are supposed to be following these days is that when there is a problem in the spec, a bug should be filed describing the problem, so that the issue can be tracked. If you could file a bug (or point me to the relevant bug if one is already filed), that would be very helpful.

(At this point I would like to inform my readers: everyone can file a bug, you don’t have to be a member of any W3C organization to do so.)

So, HTML WG team members are told by one of the HTML WG Chairs to provide alternative specification text, while the HTML5 author countermands such a recommendation, with a note that we file bugs, instead. Seriously, I keep expecting the third stooge to enter the scene, stage left.

And he does. The author of validator.nu, worker extraordinaire for Mozilla, Henri Sivonen, puts on his court jester cap to derail even the potential for worthwhile discussion:

So, the text of the proposal that Cynthia provides is addressed to humans, which Henri rejects, because Cynthia’s text should be addressed to machines. She discusses declarative markup, and addresses this discussion to people, in order to ensure that the summary attribute is properly used by web page authors and designers. Henri reduces the whole to algorithms, care and feeding of.

This is a perfect lead in to another discussion about HTML5 taking place elsewhere, in the W3C TAG, which has ultimate responsibility for ensuring the many specifications such as HTML5 work in a complementary manner for the web. The focus of the TAG at this time is detailing issues this group has with the current HTML5 draft, a discussion generating a typically mature level of discussion in the WhatWG IRC channel.

One such issue, as I have noted, as others have noted, is the fact that the specification is given in algorithmic terms, rather than as declarative text—based on discussions of a Document Object Model (DOM) with HTML markup given as a distant secondary item (barely covered, and leaving ripples of confusion in its wake).

The current rendering of the specification is considered more precise for the browser companies, for Mozilla, Google, Microsoft, Opera, and Apple, but the precision completely obfuscates the information needed by thousands, perhaps millions of web page authors and designers.

In the past, the main specification would be about the markup, with a secondary document describing the DOM. And oddly enough, this has worked, if we can believe the evidence of our eyes. Evidently, this wasn’t to the taste of the browser companies, who believe that it is more important that their needs be met, rather than the needs of the thousands, perhaps millions of web page authors and designers.

In addition, rather than leave many decisions up to the implementors of the specification, the editor’s draft seeks to detail, in minute detail, how everything is to be handled by implementors. Precise, very precise. Good luck with the 50,000 or so test cases.

So far, I have submitted three HTML5 bugs:

And I just submitted a bug for table summary. There will be others. Too bad I’m not one of the elite. 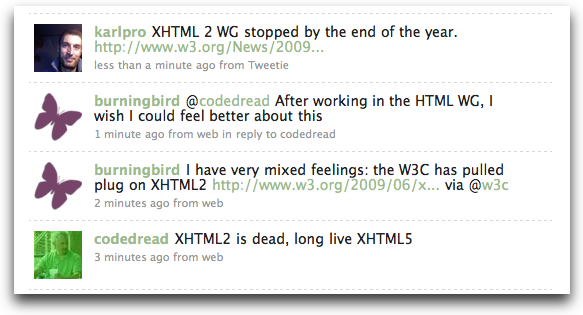 I have mixed feelings on this news.

On the one hand, I think it’s a good idea to focus on one X/HTML path.

On the other, I’ve been a part of the HTML WG for a little while now, and I don’t feel entirely happy, or comfortable with many of the decisions for X/HTML5, or for the fact that it is, for all intents and purposes, authored by one person. One person who works for Google, a company that can be aggressively competitive.

There’s been a great deal of discussion about RDFa, HTML5, and microdata the last few days, on email lists and elsewhere. I wanted to write down notes of the discussions here, for future reference. Those working issues with RDFa in Drupal 7 should pay particular attention, but the material is relevant to anyone incorporating RDFa.

Shane McCarron released a proposal for RDFa in HTML4, which is based on creating a DTD that extends support for RDFa in HTML4. He does address some issues related to the differences in how certain data is handled in HTML4 and XHTML, but for the most part, his document refers processing issues to the original RDFaSyntax document.

Philip Taylor responded with some questions, specifically about how xml:lang is handled by HTML5 parsers, as compared to XML parsers. His second concern was how to handle XMLLiteral in HTML5, because the assumption is that RDFa extractors in JavaScript would be getting their data from the DOM, not processing the characters in the page.

“If the object of a triple would be an XMLLiteral, and the input to the processor is not well-formed [XML]” – I don’t understand what that means in an HTML context. Is it meant to mean something like “the bytes in the HTML file that correspond to the contents of the relevant element could be parsed as well-formed XML (modulo various namespace declaration issues)”? If so, that seems impossible to implement. The input to the RDFa processor will most likely be a DOM, possibly manipulated by the DOM APIs rather than coming straight from an HTML parser, so it may never have had a byte representation at all.

There’s a lively little sub-thread related to this one issue, but the one response I’ll focus on is Shane, who replied, RDFa does not pre-suppose a processing model in which there is a DOM. The issue of xml:lang is also still under discussion, but I want to move on to new issues.

While the discussion related to Shane’s document was ongoing, Philip released his own first look at RDFa in HTML5. Concern was immediately expressed about Philip’s copying of some of Shane’s material, in order to create a new processing rule section. The concern wasn’t because of any issue to do with copyright, but the problems that can occur when you have two sets of processing rules for the same data and the same underlying data model. No matter how careful you are, at some point the two are likely to diverge, and the underlying data model corrupted.

Rather than spend time on Philip’s specification directly at this time, I want to focus, instead, on a note he attached to the email entry providing the link to the spec proposal. In it he wrote:

There are several unresolved design issues (e.g. handling of case-sensitivity, use of xmlns:* vs other mechanisms that cause fewer problems, etc) – I haven’t intended to make any decisions on such issues, I’ve just attempted to define the behaviour with sufficient detail that it should make those issues visible.

More on case sensitivity in a moment.

Discussion started a little more slowly for Philip’s document, but is ongoing. In addition, both Philip and Manu Sporney released test suites. Philip’s is focused on highlighting problems when parsing RDFa in HTML as compared to XHTML; The one that Manu posted, created by Shane, focused on a basic set of test cases for RDFa, generally, but migrated into the RDFa in HTML4 document space.

Returning to Philip’s issue with case sensitivity, I took one of Shane’s RDFa in HTML test cases, and the rdfquery JavaScript from Philip’s test suit, and created pages demonstrating the case sensitivity issue. One such is the following:

Notice the two namespace declarations, one for “t” and one for “T”. Both are used to provide properties for the object being described in the document: t:apple and T:banana. Parsing the document with a RDFa application that applies XML rules, treats the namespaces, “t” and “T” as two different namespaces. It has no problem with the RDFa annotation.

However, using the rdfquery JavaScript library, which treats “t” and “T” the same because of HTML case insensitivity, an exception results: Malformed CURIE: No namespace binding for T in CURIE T:banana. Stripping away the RDFa aspects, and focusing on the namespaces, you can see how browsers handle namespace case in an HTML document and in a document served up as XHTML. To make matter more interesting, check out the two pages using Opera 10, Firefox 3.5, and the latest Safari. Opera preserves the case, while both Safari and Firefox lowercase the prefix. Even within the HTML world, the browsers handle namespace case in HTML differently. However, all handle the prefixes the same, and correctly in XHTML. So does the rdfquery JavaScript library, as this test page demonstrates.

Returning to the discussion, there is some back and forth on how to handle case sensitivity issues related to HTML, with suggestions varying as widely as: tossing the RDFa in XHTML spec out and creating a new one; tossing RDFa out in favor of Microdata; creating a best practices document that details the problem and provides appropriate warnings; creating a new RDFa in HTML document (or modifying existing profile document) specifying that all conforming applications must treat prefix names as case insensitive in HTML, (possibly cross-referencing the RDFa in XHTML document, which allows case sensitive prefixes). I am not in favor of the first two options. I do favor the latter two options, though I think the best practices document should strongly recommend using lowercase prefix names, and definitely not using two prefixes that differ only by case. During the discussion, a new conforming RDFa test case was proposed that tests based on case. This has now started its own discussion.

I think the problem of case and namespace prefixes (not to mention xmlns as compared to XMLNS) is very much an edge issue, not a show stopper. However, until a solution is formalized, be aware that xmlns prefix case is handled differently in XHTML and HTML. Since all things are equal, consider using lowercase prefixes, only, when embedding RDFa (or any other namespace-based functionality). In addition, do not use XMLNS. Ever. If not for yourself, do it for the kittens.

updateA new version of the RDFa in HTML4 profile has been released. It addresses a some of the concerns expressed earlier, including the issue of case and XMLLiteral. Though HTML5 doesn’t support DTDs, as HTML4 does, the conformance rules should still be good for HTML5.