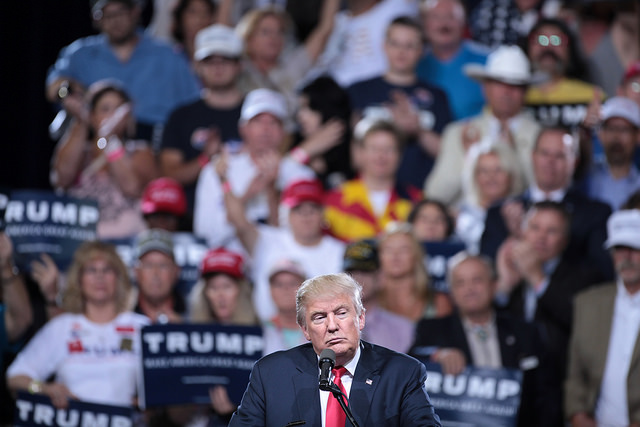 The Detroit Free Press published a story about an 8-month old baby who arrived in the dead of night in Michigan. The baby was forcibly separated from his parents at the Mexican border because of Trump’s “zero tolerance” policy.

CNN also published a story this morning. It wasn’t about babies arriving in the dead of night after being ripped from their parents. It was about what Trump supporters think of the policy of ripping babies away from the parents.

“I think people need to stop constantly bringing up the poor children, the poor children. The parents are the problems. They’re the ones coming in illegally,” she said. “Quit trying to make us feel teary-eyed for the children. Yes, I love children a great deal, but to me, it’s up to the parents to do things rightfully and legally.”

Trump supporters don’t support laws more than any other citizen. They’re not more broke, more unemployed, or worse off than the rest of the people in this country. They are bigots. They are racists. They’re so full of hatred of those who are different that they turn a blind eye to babies being ripped from their parents. And they cover their actions with lies about ‘economic anxiety’ and their new favorite, that there’s a ‘border crises’.

All of these facts add up to one truth: there is no border crises. The so-called ‘crises’ was made up by Trump and hand fed by Sessions, Kelly, and Nielsen, aided and abetted by Ryan and McConnell, with more than a little help from talking heads at Fox. Trump created the specter of hordes of ravening criminals at the border solely to feed the racism inherent to the core of Trump support.

Now, we see the consequence of the Trump election fully realized by his administration ripping children from the arms of their parents. Think of it: an 8-month old baby taken from his mother, flown in the dead of night to a strange place, and literally placed in a baby jail.

This is our line in the sand moment. It’s not just Trump we have to disavow, it is those who continue to support Trump’s policies; support him, even in the face of his most heinous acts.

Tonight Trump is stumping in Minnesota. We’ve been told that this is what he’ll be doing with most of his time until the election in November. I guess compared to the horrid acts he commits when he’s in the White House, we should be happy he won’t be working for most of the year.

From this day forward dump, block, or disavow these people. Don’t argue with them, because there’s nothing to argue. Don’t respond to them, block them. Don’t ignore their beliefs, dump them. Don’t be silent in the face of their hatred, disavow them. Disavow them loudly, and from the mountaintops if you need to in order to make them understand what we mean when we say elections have consequences.

Dump, block, and disavow any politician who is even remotely sympathetic to any of Trump’s actions.  Don’t pay attention to their words, look at their actions. None not willing to stand at the border in defense of that baby and his parents is not worthy of our precious votes.

And when you’re finished dumping, blocking, and disavowing the people who still support Trump, do the same with the media like CNN, who rush out to see what Trump supporters think while the country and the world look at Trump’s actions with abhorrence.