Saturday’s weather was warm and mild for this time of year, as I set out to visit the Falls at Johnson Shut-Ins, and then Elephant Rocks on the way back. As I drove out to the Shut-Ins, I kept my eye out for the MDOT sign that proclaimed that this next mile I would drive would be cleaned up by the fine folks of the Ku Klux Klan. I couldn’t find it where it was supposed to be, on Highway 21 just north of the intersection with Highway 8. I guess someone had taken it down again.

Signs aplenty, though; yard after yard along the way with green and white signs saying, “Jesus”, handed out by one of the local churches. Not to mention all the homes in Iron Country proudly flying the Confederate Flag.

The water in the Shut-Ins was high and they were particularly beautiful that day, with the mix of running water and frozen ice. There was family exploring about and it was pleasant walking here and there and listening to their good natured chatter. Once the father stepped in front of me when I was lining up a photo and then apologized for ruining the picture. I told him he didn’t ruin it, he was acting as an unpaid model. He liked that, went to tell his kids he was a model. 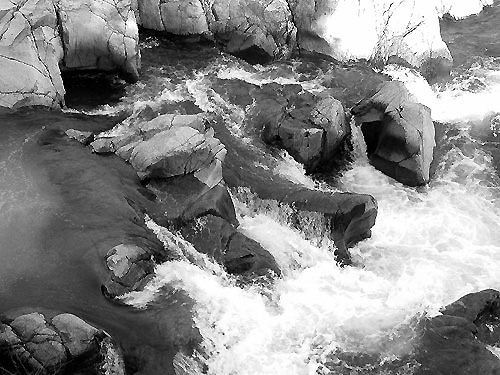 It was late when I got to the Elephant Rocks, with only a couple of cars in the parking lot. There was this old woman walking around the lot using a walker, just circling about. When she passed me, she smiled, wished me a good day as she continued her dedicated circling.

Out among the rocks I passed one couple as they were leaving, but there was no one else about, which is unusual for the Rocks. It was a beautiful day, too — sunny and cold and the late afternoon light looked nice against the red granite with their streaks of green lichen. 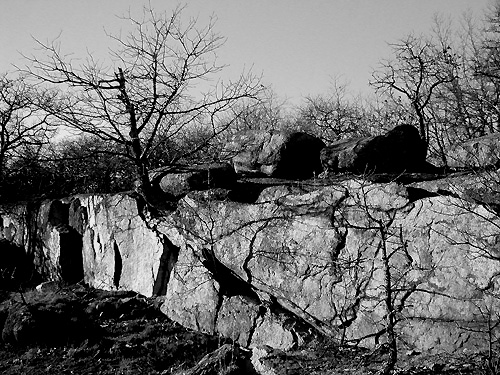 At the overlook I heard what sounded like voices ahead of me and when I turned the corner there was a man standing behind one of the boulders. I thought he was speaking with someone but he could have been peeing in the shelter of the rocks. I averted my eyes just in case, not wanting to embarrass him. While I was admiring the view of the valley, he passed me, wishing me good day with a nice smile.

A bit later I ran into him again as he was standing on the path looking at some of the rocks. As I passed he pointed out where the granite work had stopped and mentioned that the quarry played out when most of what was left was granite that was too soft. I said that he sounded very knowledgeable about the quarry and he replied that he’d worked with rock at one time. 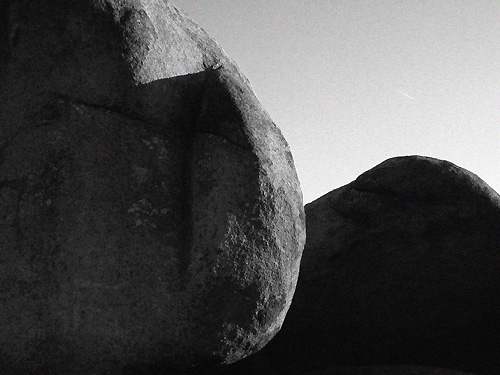 Later when I was taking photos around the Elephant Rock formation, I could see his feet beneath the overhanging rocks, hear him walking about, but he didn’t say anything, just looked about and moved on.

Finally it was getting cold and late and I left, heading on the trail past the old quarry lake. The man was there and smiled again and seemed pleasant enough. I stopped to look at the Lake like I always do and we fell into a conversation. 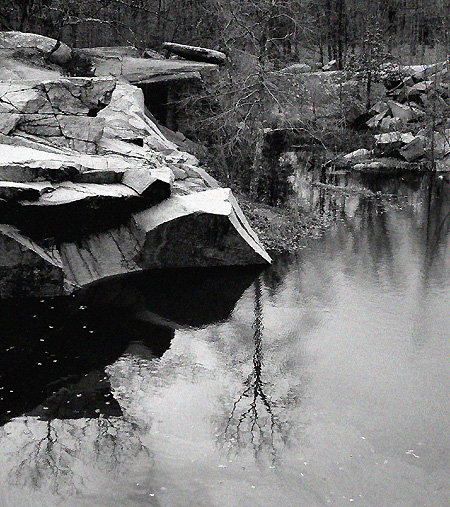 He said he’d been at quarries all over the country — liked to walk among them. He pointed out that the lake below us was only about 40 feet deep, but one up in Wisconsin was over 400 feet. He asked where I lived and when I told in St. Louis, near Webster Groves, he mentioned that he’s spoken at the college there once. I asked if he was a teacher or a researcher or something and he paused and said, no, he worked with the homeless, with people who were in trouble.

People who were in trouble, I do remember him using that phrase.

He was about my height, stocky, wearing an old fashioned wool hunter’s coat and seemed like new hat. He had deeply brown eyes, I remember that. Beautiful brown eyes, and dark brown hair to match. His hands were tough, like he’d been working in dirt lately, and there was an old, old twisted gold ring on his wedding finger.

He said he was from Chicago, but he lived all over now — going wherever he was needed. Said that the kids in St. Louis needed him now, they were killing each other with drugs and hate. I asked who he worked with and he named a minister’s name, but I didn’t recognize it.

He was pleasant to talk to but it was getting cold, so I bid him good-bye and headed down the path. He turned to me, looked at me intently as I started walking away and said, “You be careful now.”

When I got back to the parking lot, I noticed that my car was the only one in the lot. There was no one else around, and the only place close to the park was the trailer for the park manager. I wondered if he was a friend of the manager’s, but there was no cars there, either.

As I got into the car and prepared to leave, I noticed him walking down from the path into the parking lot, hands in his pocket, walking without any hurry. I pulled out slowly, looking at him in my rearview mirror as I drove away. He didn’t head for the trailer but headed out the way I was leaving, to the road leaving the park. However he got there, he didn’t get there by car.

I found myself almost circling back to offer him a lift, but didn’t. It was not in my nature to not offer a helping hand, but I just kept going. 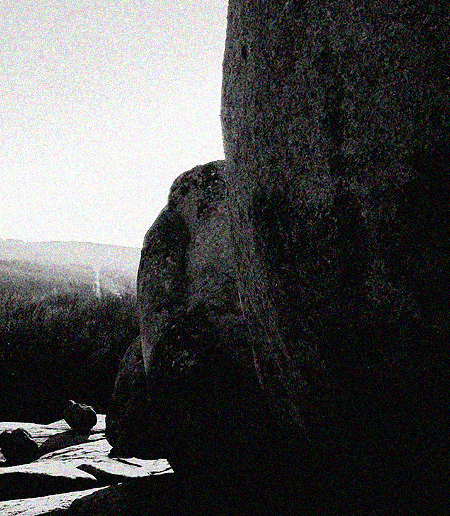