Named after the American astronomer Edwin Hubble, the Hubble telescope was conceived as a way to put a telescope into space outside of the vision-impairing atmosphere that surrounds our planet. By doing this, we can see more and learn more about the universe that surrounds us.

Hubble was not the first astronomical effort in space: that honor belongs to two Orbital Astronomical Observatories launched into space in 1968 and 1972. Because of these earlier efforts, support for a space-based telescope grew and NASA, in 1975, began the design of what was to become known as the Hubble Space Telescope.

Several groups and companies were involved with the building of Hubble, including NASA, the European Space Agency, the Marshall Space Flight Center in Huntsville, Alabama — home of Space Camp — as well as the companies that actually built Hubble: Perkin-Elmer Corporation and Lockheed Missile and Space Company. Perkin-Elmer built the optical and guidance systems, while Lockheed built the outer shell of the telescope. The European Space Agency furnished the solar arrays and one of the scientific instruments; the other instruments were furnished by major universities. 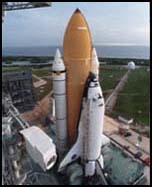 According to NASA’s History of Hubble, it was launched into space on April 24, 1990, via the Shuttle, Discovery.

Hubble was designed to be “modular”, with different bay areas holding different scientific instruments. With this approach, Hubble could be maintained by crews from shuttles, basically creating the first assembly line in space. Or would that more likely be, the first erector toy in space? Whatever we call it, it is the modularity of Hubble that assisted in the first real challenge to the telescope. You see, Hubble was born near-sighted.

Off to a Rocky Start

Like most of us, Hubble wasn’t born perfect. Hubble’s primary mirror was incorrectly shaped, ground a little too flat to the edge. How flat? The mirror’s edge was off by about the same width of 1/50th of a human hair.

Because the primary mirror was ground a bit too flat, instead of focusing all light into the center of the mirror, the light ended up being spread over a larger area, creating a blurry effect of images — hence the concept of Hubble being near-sighted.

NASA knew that maintenance of Hubble would be by shuttle, but probably wasn’t expecting that maintenance would have to occur so quickly. The challenge was to find a way to fixing the near-sighted effect without having to replace the mirror, a task that was impossible.

What NASA came up with was, basically, a pair of glasses for Hubble. Except, in this case, the glasses were the Corrective Optics Space Telescope Axial Replacement (COSTAR), and the Wide Field/Planetary Camera (WF/PC-II). Both of these instruments would provide corrective optics that would compensate for the primary mirror, thereby canceling the blurry effect and providing clear images. These new optics would then be installed by shuttle using slots within Hubble’s instrument array.

On December 2, 1993, the shuttle Endeavour was launched on a unique mission: install the corrective optics and fix Hubble. NASA was making a house call.

Did the fixes work? You only have to look at many of the hundreds of images produced by Hubble to know that the corrective optics — in addition to the excellent work of the Endeavour astronauts who installed the optics — was a success.

For this section and the next, I turned to STSI’s Hubble Primer.

According to the primer, Hubble is as long as a school bus, and as tall as a 5 story building. Definitely bigger than that backyard telescope you might be familiar with. Hubble’s shape resembles a long foil wrapped tube with wings, the wings being the solar arrays necessary to provide power for the telescope.

Hubble is controlled from earth, and moves through the use of gyros or reaction wheels. These maintain Hubble’s stable position regardless of factors such as solar radiation and gravitation from other objects. In addition, when Hubble is being positioned to record information from a specific planet, galaxy, or star, a pair of star guides near to the object are located by Hubble. The telescope uses these star guides to maintain a steady fix on the target object. In fact, one of the first activities performed when reviewing a proposal to use some of Hubble’s time and resources is to see whether guide stars have been identified near the object that is the focus of the proposal (as outlined in Observing with Hubble).

Light enters the telescope and hits the primary mirror. This mirror, in turn, focuses this light on a secondary mirror, which in turn reflects the light back to a specific point on the primary mirror. This light is then recorded and analyzed, and data gleamed from the observation process is stored in onboard computers. Scientists then tap into this stored data for the data they need.

What are some of the instruments used to record information? Well, the most widely known is the Wide Field and Planetary Camera, responsible for the images you see at the Hubble site and in this article. Others that are currently operating are the Near-Infrared Camera and Multi-Object Spectrometer (NICMOS), for infrared and spectroscopic imaging; the Space Telescope Imaging Spectrograph (STIS); the Corrective Optics Space Telescope Axial Replacement (COSTAR), discussed earlier, which provides for correction of the primary mirror; and the Faint Object Camera (FOS), which operates over a wide wavelength range and which contains an image intensifier to enhance image light. You can read a more detailed overview of the instruments in the General Overview of the Hubble Space Telescope

What we have learned

Personally, just to see neighboring galaxies and see the birth of stars sounds like more than enough justification for Hubble, but others may want more. Okay, then how about the fact that with Hubble we now have a better understanding of how the Universe works and our place in it. We have now have physical evidence of black holes to provide support for our theoretical understanding of these “sinkholes” in space.

Additionally, we know more about the age of the universe, have seen Pluto for the first time, recorded evidence of the elusive Brown Dwarfs of space, and, yes, we have even seen the birth of a star.

So, what do the folks at STSI, NASA, and friends have in store for us next? What else but the Next Generation Space Telescope, or NGST.

The NGST project is currently underway and hope is that it will launch into space in the year 2007. Its purpose is to search for origins: of planets, or stars, galaxies, even the universe.

I’m fascinated by the thought of how much we have learned from Hubble and the promise of how much more we will learn from NGST. Who knows? Maybe someday while we are looking outward, we’ll actually spot someone looking inward…at us.

The next generation space telescope, named the James Webb Space Telescope, was launched into space, December 25, 2021. A bit late, but better late than never.