Before I quit Orkut, at the Digital Photography forum one of the members started a thread with the question of which is better: digital or film. I expected to hear most members of the group say digital, but instead there was a good mix of answers. Some preferred film, some digital, others, such as myself, liked both.

This last week I’ve spent time scanning in several old slides and negatives, and I’ve enjoyed it for the most part. It was good seeing old photos, like this one of flowers in New Hampshire, though it’s not the type of photo I’d probably take today: it’s so determinedly cheerful, like the wife of a dying man. 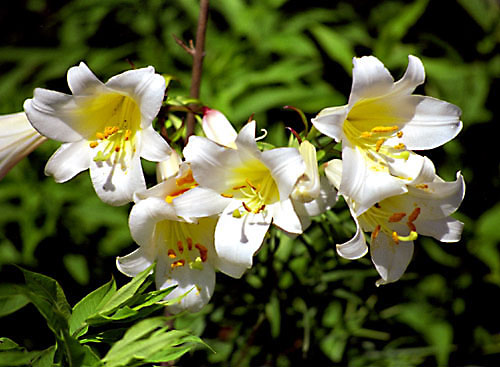 I love my digital camera because it allows me to experiment and try new things without having to worry about the cost. I also like getting immediate feedback, seeing the results as I take the photo. By checking how each photo comes out, I can modify the exposure and the angle until the picture I’m trying to find appears. Tough to do with film, unless you have a lot of money, or a lot of experience. Or both.

Sometimes, though. when I’m in a mood, I’ll take pictures of everything, and I’m not sure this is good for building photographic skills — skill is dependent on being somewhat discriminatory in the photos one takes. When I read about photographers who have put tens of thousands of digital photos online in just a few years, I have to wonder if the good shots I see were deliberate creations, or the results of statistical probability.

With film, each picture has a cost, so you’re more aware of what you’re doing ( or at least I’ve found it so, but I could be an exception). Plus there’s a feel to the film camera you don’t have with digital (or at least, I don’t have it with mine).

Awareness and feel aside, there’s a magical aspect to film: getting it developed and seeing the photos at a later time; looking for the ones that worked among all the ones that didn’t. And my film cameras have better optics than my digital, but that’s primarily because I can’t afford the high end digital SLR cameras.

(An advantage to the explosion of digital cameras is that excellent film cameras can be had at eBay for literally a few dollars. A disadvantage is finding out that my beloved film cameras aren’t worth more than the price of a nice blouse.)

When I take digital photos, I’ll delete pictures when I’m out in the field and am running out of space. Can’t do that with film, though, and I’m not sure if this is an advantage or disadvantage to digital photography. I’ve kept most of my old negatives and ones I didn’t like long ago are the ones I find I like now. Like this misty, shaggy, old growth tree with its crown of ferns.

Film can fade, but there are risks to digital, too. There was a story in the evening news on Sunday about how images are being lost because they were digital and not film. The format the earliest digital images were stored in is now no longer compatible with today’s computers, and retrieving the old images is difficult. Film can fade, but it still stays film.

Another risk of digital film is demonstrated by the infamous hug of Monica Lewinsky by Bill Clinto at an event before the story broke of their affair. The photographers at the time used digital, and weren’t interested in the photo — just a crowd shot, after all — so they discarded the images. All except for the one lone photographer who had captured the event on film, and thus recorded this bit of infamy in history.

Amy Yee in the UK Financial Times wrote on this:

Photographers cite an almost mythical example of the importance of archiving: photographers using digital cameras deleted an image of former US president Bill Clinton greeting yet another faceless crowd in 1996. Dirck Halstead, a Time magazine photographer, was still shooting film. After searching through thousands of pictures in Time’s archives, he recovered the indelible image of Mr Clinton hugging a beaming Monica Lewinsky.

Photographers who use slide film can also be eager to toss slides, but when you use negative film, you tend to keep everything. Most of the images I’ve been able to salvage have been film. I wonder how many good images I tossed long ago because my eye wanted to go one way, but the results didn’t fit the the requirements of a proper photo. I wince at this, and am determined not to toss an image — digital, negative, or slide — unless it’s obviously bad. And then I’ll probably still hold it.

Back to my scans of the old film. Some of the it suffered very little over time, like the flower above. Other negatives or slides, though, deteriorated until the film is either unusable or requires a great deal of work to fix. Several pages of film are totally lost.

But there was one set of photos, of older buildings and a garden in New Hampshire where the deterioration has caused a beautiful color shift and fade that, in my opinion, left incredible photos in its wake. Incredible at least to me,and with that I will have to be satisfied. Ultimately, regardless of whether I use film or digital, the only one who can judge whether my work is progressing in the direction I want it to go, is myself.

While some wax nostalgic about pungent chemicals and line-drying wet prints, most professional photographers embrace digital. Willis Hartshorn, director of the International Centre of Photography in Manhattan, says that digital technology is “just another tool in the tool box”. Since its invention in 1839, photography has always been a changing art form, with its evolution from daguerreotype to silver halide and from black-and- white to colour. Photographers are accustomed to change.

“Ultimately, photography is not about technology,” says Mr Hartshorn.

“It’s about pictures. Technology doesn’t make it any easier or harder to have good vision,” he adds. “The kind of things a serious photographer is trying to accomplish [go] beyond technical issues. It’s about vision.” 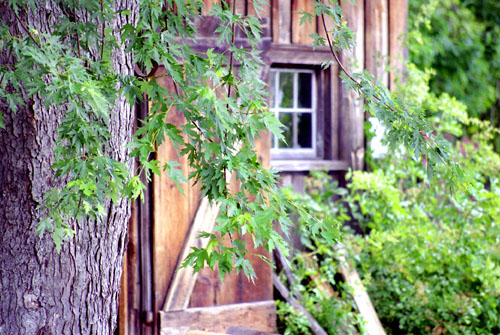