We’ve won in Iraq. The citizens of Bagdad are elated. Nothing like a toppled statue to make a conclusive point.
…
The sounds I heard coming from Cheney this morning were very encouraging. If we do what he says we’re doing, maybe we can restore some level of trust in an Arab world that’s still very skeptical.

To which I then responded with:

Let’s see – over 3000 Iraqi dead, several journalists dead or injured, battles raging all over the country, just starting to see the so-called terrorists activities start, Arab world furious, and the United States beat a tiny, ill-equipped people, and has forced them to scramble in the dirt for food and water.

Cheney basically saying that we’re occuping the country, but the UN can handle all those rag tag people that are hungry and thirsty. We’ll take care of the oil and the wealth.

Of course, we showed the world the chemical and biological weapons that made Iraq such an imminent threat. Didn’t we?

And best of all, all the webloggers don’t have to talk about this anymore – they can [go] back to talking about how great we webloggers are.

Oh by the way, did you see this neat trick you can do in Radio?

A bit confused, Doc re-reads posting, and responds with:

Trying to make sense of this, I go back and re-read my post and realize there’s yes-I’m-still-peaceblogging paragraph missing.

For what it’s worth, here’s just one chunk of what Cheney said:

“Exactly what it will look like is something the people of Iraq are going to have to determine. I think it would be a mistake for we, as Americans, to say, well, look, here’s a cookie mold, this is how we do it, this is, therefore, exactly how you have to do it. I don’t think that will work. I don’t think that takes into account their unique culture and historical experience and so forth. They’re going to have to work it themselves and figure out what makes sense from their standpoint, given the social organization and the way their society has functioned in the past. And it’ll be a difficult task. But they’ve got some very able people already engaged in thinking about those kinds of thoughts and issues.”

For now I’d like to take him at his word. Let’s see what happens

I then see the following paragraph in the posting:

Later I’ll get around to blogging more about what the Mayor of Hiroshima has to say about our successful new National Security policy. And the fine time Mike Hawash is having, enjoying his protected American freedom in jail.

I think about what Doc says – let’s see what happens. Already happening:

“Where is General Garner now?,” Chalabi said in an interview with CNN from his base in Nassiriya. “People are hungry, their supplies are going to run out. Why are they not here? Why are they in Kuwait?”

Chalabi, who earlier said he was to meet U.S. officials and Iraqi politicians on Saturday to begin planning an interim authority for Iraq, also said members of President Saddam Hussein’s Baath party still posed a danger.

“The remnants of the Baath party will continue to pose a threat…as long as there is no electricity, security or water,” Chalabi said in the interview monitored in London.

“They are rapidly trying to ingratiate themselves…and try to bamboozle the American commanders into cooperating with them. The ‘de-Baathification’ process must begin here,” he said.

Doc and I might not always come from the same direction, but we’re both saying the same thing:

What makes anybody think this is all over because a statue gets pulled down? 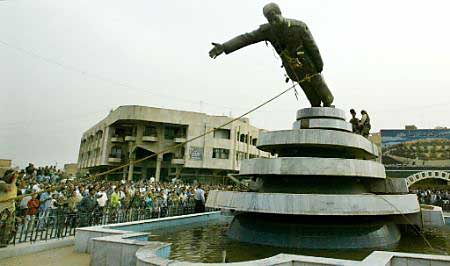