A new story just came out that Multnomah County in Oregon will be issuing marriage licenses for gays tomorrow. For the first time since the first license was issued in San Francisco, the gay marriage issue has hit close to home. And I am so pleased.

There is one couple, let’s call them Jamie and Barbara, who I’ve known for years. We knew each other in Seattle, and Jamie and I also worked together in Portland. In fact, it was thanks to Jamie that I found my first job in Portland, when my Seattle company closed its doors.

They have two children, biologically by Barbara with donated sperm, and adopted by Jamie. They have struggled for years with the handicaps associated with being a lesbian couple who couldn’t marry in the eyes of the law. This ranged from the extra hassles associated with the adoption, to having to purchase individual medical insurance for Barbara because she couldn’t be covered under Jamie’s company-provided insurance.

I remember one Sunday having brunch together at our house, with another couple. I said something about my husband, and the other wife agreed about her husband, and then Jamie laughed and said that she felt the same way about her wife.

I remember the event as if it was yesterday. It was a warm day and Barbara was wearing a white T-shirt and jeans, and Jamie was in a cotton shirt and khaki and the second child hadn’t come along yet, but their first, a boy, was chasing our poor cat around. When Jamie made her comment about, “…her wife”, it tripped my world up. Between one moment and the next, all the old stereotypes about relationships and marriage and being straight and being gay came crashing in on me. Even though we had been friends for a long time, and had been at each other’s homes, I hadn’t internalized for myself what it means when two women love each other.

It means two women who fall in love and commit to each other for life. One woman’s family is open and loving and accepting, the other less so, and they have to live with this. They have a ceremony and rings and a party to celebrate this commitment, but no license because the law won’t allow it. When they move, they have to be careful where they move to, because of who they are. Every change has to be considered in light of who they are, and what they can or cannot do under the law. They plan for and have a kid, who has a ‘mama’ and a ‘mama Jamie” who love him very much. Luckily they’re in one of the states that allows gay adoption, but it takes them over a year of ‘home visits’ before the adoption is approved.

That’s what it means when two women love each other, but aren’t allowed to legally marry. It also means one woman calling another woman, “wife”, legalities be damned.

And in the next moment, I went in to get more coffee, and Barbara ran to rescue our cat from her and Jamie’s son, and Rob laughed at something someone said, and then we all sat down to eat.

Jamie and Barbara–this one’s for you. 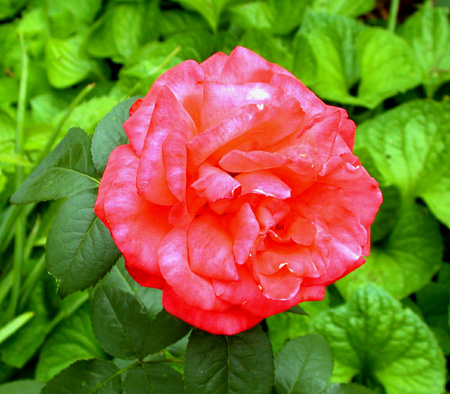