Fall colors are at their peak here in Missouri, which means they’re beyond the peak for me because I like the colors when they’re just starting to touch the trees. However, I missed my peak Fall color time, though it’s very pretty here now and the weather is about as good as you can get to enjoy these times of change.

(Missed is the wrong word, because I didn’t ‘miss’ the colors – I just didn’t see them. There’s a difference.)

I spent yesterday walking around the Shaw Arboretum and Route 66 parks taking photos with both my digital and film cameras, which is whyyou’re blessed with slow downloads today. Yesterday was a Good Picture day, or at least, I think it was. Perhaps because I was feeling good, everything around me felt good, including the photos. Maybe someday I’ll be feeling bad and return to this post and ask myself what was I thinking. 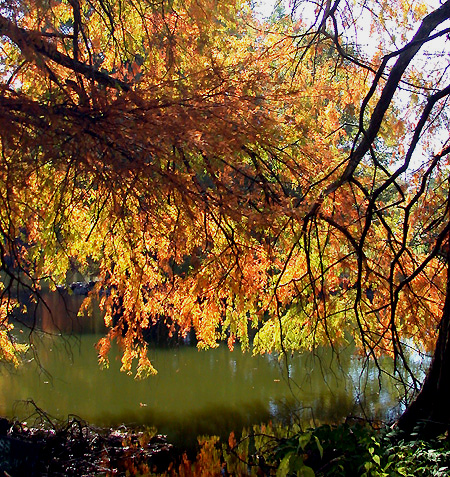 I’ve worked out a new photo expedition routine: film camera on strap around neck, camera bag on shoulder with its film and filters and lens, digital camera in case hooked through finger or belt, and monopod in my right hand doubling as a walking stick. I am a walking photo studio, or at one point yesterday when I was trying to climb down a steep hill to the water’s edge – always water with me, isn’t it? – I was almost a falling photo studio. Up, nup, up, oh no, aiee! Next time, don’t leave the lens cap off.

At the Arboretum it was School Day, which didn’t impact on me much except at one point when I was taking photos of a field because I liked the colors and texture, not because there was anything clever or cute or significant. There, I ran into a group of kids I couldn’t avoid in time and the students were looking at me – with all my gadgets and bags and stands – instead of their teacher who only had a lousy bud in her hand.

“Does anyone know why I found this bud now, rather than in the Spring?”

The kids couldn’t care less and you could see in some of the students faces that they wanted to play with the cameras, and others wanted to be in front of the cameras, and one girl was in the field picking all the wild flowers because, as she told the teacher, they ‘were pretty’. All the while the park ranger or whoever she was was standing in the background as escort, probably wondering why she was there because ‘park ranger’ is the profession that shows up on aptitude tests when you come across as extremely introverted and uncomfortable with groups of people.

I know. I took the tests. 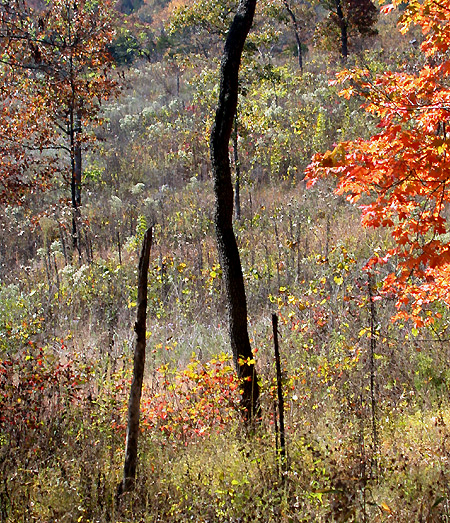 Back to my new routine: I use the digital camera to frame a photo and test exposure settings, trying out various angles and depths. I then take the photos on film, bracketing the shots just to make sure that I have a better chance in one good picture. I’ll post the digital photos online, for fun, reserving the film shots for magazines. I’m now on three magazines ‘needs’ list, which means that the photo samples I’ve sent have passed muster and when the magazines need a particular type of shot, I’ll be on the list of people who receive a ‘Do you have any photos of …’.

Today I’m out taking photos again, responding to a request of ‘Do you have photos of Missouri’s unusual rock formations’, which I hope I can respond to, in a week or so, with, ‘Why yes, as a matter of fact, I do.’ This isn’t a lie; this is postdated truth. 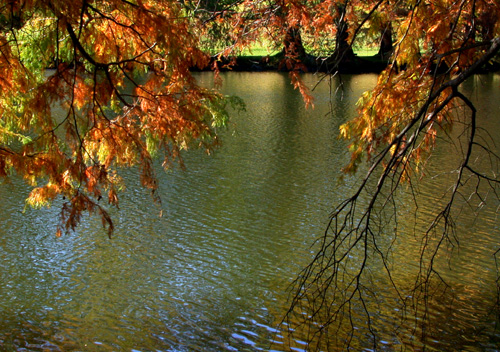 It’s also true that I’m on a new lifelong diet now that restricts my consumption of things such as chocolate, which is a bit heart breaking because I think eating good chocolate is an incredibly sensual experience, and there’s few things more interesting than eating a lovely bit of cream with a bittersweet chocolate covering and a candied violet on top. However, I also like feeling good so accept such restrictions with equanimity. I figured what I would do is reserve my chocolate consumption for very special occasions, such as my birthday, when I’ll buy myself a beautiful box of chocolates – it must be beautiful, or it’s not the same. I’ll then enjoy them, one by one, accompanied by cups of strong, rich coffee, sitting at a window looking outside with my feet up and an afghan over the legs. Can you see that I’m building a new ritual here to help me accept that my lifestyle changes are a reward not a punishments?

To help me breaking my belief in indulgence as an everyday thing, I’m trying to convince myself that other activities such as ‘hiking’, ‘photography’, and ‘weblogging’, are vices and therefore bad for me. By doing this I satisfy my craving for bad things, with things that are really good for me, or at least, sometimes good for me. 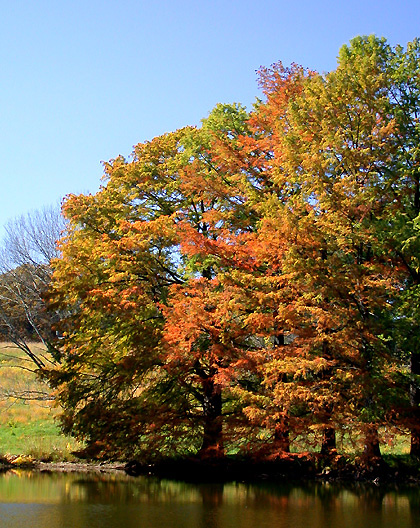 Speaking of weblogging, did you like the Year Ago feature I implemented? I found it reminded me of where I was a year ago as compared to where I am now, but without the hang up of ‘time’s a flying and I’m a dying’ that past reflectiveness tends to generate. Whenever I take a break I’m going to throw this page back up, so you’ll know when I’m taking a break, and when I’m just not feeling like posting. I think its important to distinguish between the two, don’t you? After all, taking a break implies doing something fun and it’s probably okay to email the person and say, “What’s happening?” Not feeling like posting most likely means that you’re too busy and in a pissy mood, or you’re not busy enough and in a pissy mood, and who wants to walk into that one?

Of course, my break wasn’t a true break, so this break from the break probably won’t be a long one. Did you understand that? Or were you dazzled by the pretty pictures and the rambling discourse? 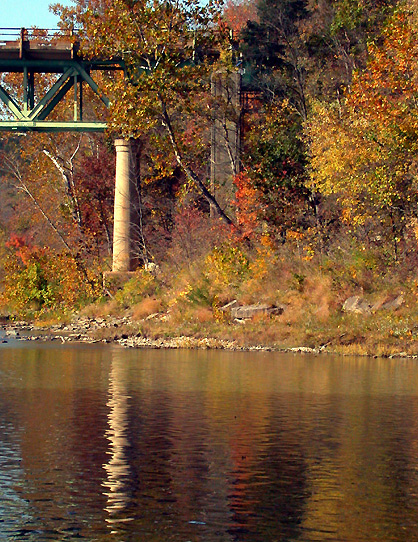 During my break, which wasn’t a complete break and therefore didn’t count, I did a self-interview thing with Frank Paynter, a different pattern to the famous Sandhill Tech interview process that I don’t think Frank liked much because the man really wants to control the direction of his interviews. Of course, he thinks I don’t like interviews because I want to control what’s printed, but that’s just not true. For instance, I was also interviewed by a very nice Wired journalist for an upcoming article, which I’ll point out when it comes online. If I approve of it, of course.

I enjoyed the self-interview for Frank, and Frank’s a pretty cool guy, though he’s not paid me my dollar yet for he photos I took for him. Once I get that dollar I’ll add it to one or two others and send a pound of MJB coffee and a Boulder, Colorado library card to my friend Chris Locke, who is both certifiable and broke . He’s a good man, Chris is. A little scary, especially when you talk to him on the phone late at night when you’re groggy and not quite there and vulnerable to strange talk and stranger men, but good. 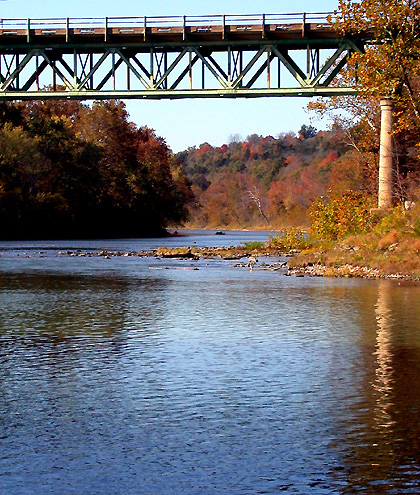 I also wrote a weblog essay about weblog comments to Weblogging for Poets. I felt I needed to say something when I was trackback pinged 22 times for an older posting on handling comment spam. I was also disturbed by a growing trend I’m seeing among webloggers to use global technology approaches to fixing what are social challenges. This includes blacklisting, which will never be an effective solution to our Net problems.

Another variation of this arose in the last few days when Hosting Matters was hit with a particularly virulent DDoS attack, as discussed at Winds of Change. It’s been in the Blogdex, and folks are saying that the attack is generated by Al-Queda against a Zionist weblog responsible for taking down Al-Queda sympathetic weblogs. All this according to their ‘intelligence reports’, or intel reports, as they like to call them.

Our current server was hit with DoS attacks in the last month, and it’s a Canadian-based server. Is it being attacked, then, by religious fundamentalists because Canada is talking gay marriage?

There is nothing more dangerous than people holding a gun they don’t know how to use, and webloggers who don’t understand the technology they depend on shoot themselves in the foot or the mouth with too much regularity. There are essays waiting to be written in the Internet for Poets weblog that say, among other things, this is the trigger, and this is the part where the bullet comes out and don’t point this part at your head when you pull that trigger. 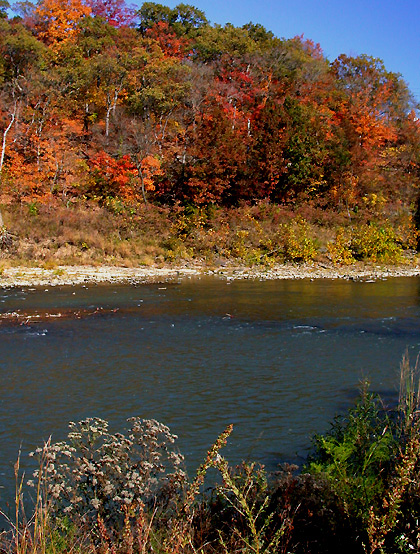 We talk with great enthusiasm about topics as diverse as linguistics, philosophy, politics, art, culture, language, history, literature, sex, and rock n’ roll. However, when the conversation goes round to technology all but the most diehard techies turn off because we’ve now entered the no-man, or should I say no-woman’s world that frankly most of you find completely lacking in interest. Yet it is technology that can effect you, and does effect you, more than most of these other topics. Not the politics of technology, which I also find to be an incredible bore – but the hows and whys of email spam and comment spam and DDoS. How can you make good decisions when you don’t understand? 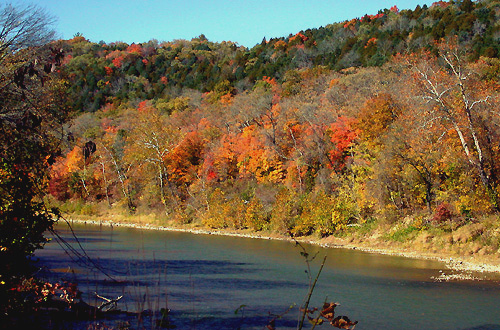 Because of the recent Net problems, we’re moving the Wayward Weblogger home, and the The For Poets site is the first being moved to the new server. Yes, the Wayward webloggers are moving off a a dedicated server and to a new home with, you guessed it, Hosting Matters. In fact, I started the account the very day this last DDoS happened, but really, it was a coincidence. Yes, only a coincidence that our new server was in the good block of IP addresses, not the ones under attack. I did not break it. Honest. I don’t need to break what’s already broken.

Next year is going to be a very bad year for the Net, and every weblogger, no matter who you’re hosted with, had better be ready to have your site down an average of 2-4 days every month. Yes, days. Email will continue to be a problem, as well as viruses and comment spam and a host of other problems. Our reactions to these events, rather than helping, are just making things worse. If webloggers may not hold the key to influencing the presidential election or the war in Iraq, we are the keyhole for an every increasing burden on the Internet. In other words, webloggers are bad ju ju for the Net.

Added up, I just couldn’t devote the time necessary to protect our dedicated server the way it needed to be protected and opted out to have the very professional team at Hosting Matters handle it. I watched them in this last go around and the steps they tool to block the DDoS. They did good, as good as anyone can with this type of attack – contrary to the half-wits saying, “Well, these types of attacks are easily prevented.” 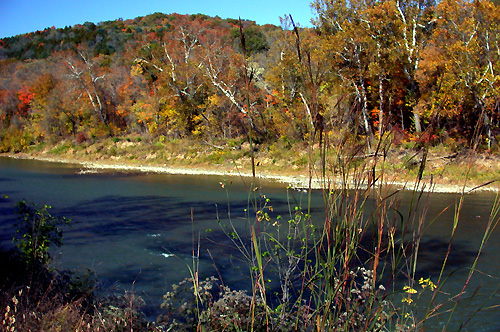 My, look at the time! That’s the problem with weblogging – it generates a time warp and you start to write at 7 and all of a sudden its now 11 and I have a pile of rocks with my name on it. Must toodle.

I have to share one last photo with you first, though, of a friend I met along the way yesterday. He was sprawled across the limestone rocks trying to absorb the heat into his body. He was having a marvelous time, flattening himself down and stretching as far as he could because that heat felt wonderful. You could see it in his gentle, sweet little face: 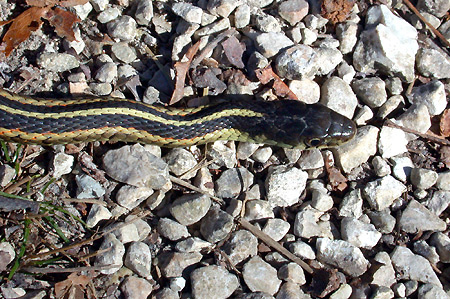