The weather was beautiful today and I and my roommate went for a walk at Powder Valley. The forest was just getting its new green and mixed among last years fallen dead leaves were delicate pink, purple, blue, and white flowers — some hardly more than a mote in one’s eye.

As we were walking back to the parking lot, my roommate yelled out, “Stop! Don’t move!” 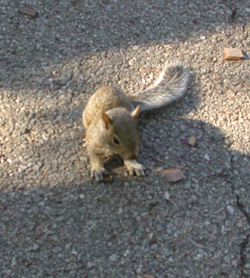 At my foot was the smallest squirrel I have ever seen, a baby grey squirrel I had almost stepped on. When I stopped, afraid to move, the little guy walked up to me, climbed my tennis shoes and held on to my laces for dear life. The moment was indescribable.

Eventually the little creature decided I wasn’t it’s mama after all and crawled down to the sidewalk. It could barely walk, and moved with drunken movements in a circle, shivering from fear and hunger. Obviously this little guy was too soon out of its nest, and was in trouble. What was worse is that it would go towards people, looking for comfort and if they didn’t see the little thing they would almost step on it. Two younger guys came close until the small crowd that had gathered by that time yelled at them.

My roommate went to the park center to get help while I stayed to keep the creature from harm. Well, I stayed with a group of about ten people, all forming a circle around the little baby to keep anyone from hurting it. Unfortunately the park folks were gone for a couple of hours. A nice man with a dark sweat shirt and grey hair stopped, kneeled down, and the baby crawled up to him. The man put his hand down and the baby crawled into it and stopped shivering, content to have contact with a warm, soft creature. 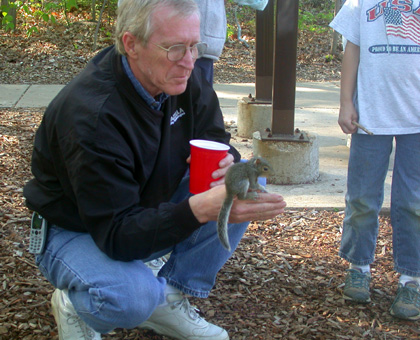 I know the scoop about baby wild animals — don’t touch. You can get your scent on the creatures, scare away their mothers, the whole thing. But if we left that baby alone, it would have been dead. Of that we had no doubt.

By helping the baby, we interfered with the natural development of this wild creature. If it was meant to die it should die. But then, we interfered with the creature when we built the cement walk that confused and frightened the baby. When we filled its home with tall, strange creatures that were warm, but didn’t have a nipple to suck, we were interfering. We also interfered by polluting its air with the fumes from the cars we rode in to get to the park. This little creature’s whole life was a result of human interference. A little late to quibble about interference when you’re looking into tiny, innocent eyes, and feel a small clawed paw wrap around your little finger.

The man made a little bed in his shirt for the tiny creature, who curled up, though still hungry. When I got close to look at it, it nibbled my nose. I looked into its tiny, clear eyes. It nibbled my nose again.

The man and his friends were at the park for a presentation that night. He said he would watch it, keep it warm and safe until the park people came back. We, reluctantly, left for home.

When I got home I went online and looked for information about lost baby squirrels. I found out that it’s perfectly fine to intervene and help the baby; it can still be safely re-united with its mother even after human contact. If not, the park has a rescue service for hurt or abandoned baby animals. The little baby will be fine. 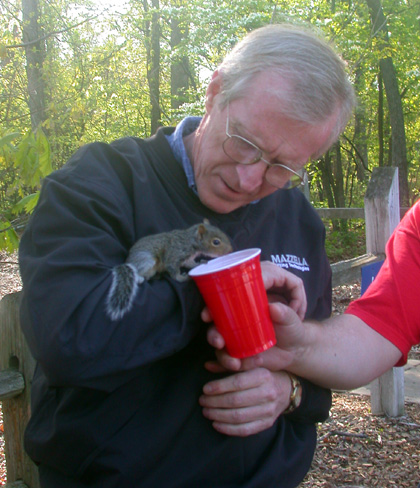