The news spread first as a whisper and then as a shout: First Mother was granting to each creature one wish. One wish, only, but whatever was asked, would be granted. Mockingbird heard the news from Hawk who head the news from Sparrow who heard the news from Robin and the forest was atwitter with the sound of the birds as they discussed this extraordinary event.

When the Great Day came, all the birds gathered in the Glen, bending the limbs of the trees until they grumbled and groaned out from the weight. Suddenly, a smell of new grass and old dirt and the sound of sea breeze and rustling sand and the light of the sun and the moon entered the Glen, and all the birds bowed low because this was First Mother, the first of all of them. The light was so bright they could not see her form, but they could feel her warmth, and when she spoke each word seemed weighted, as if pulled from Time itself.

:My friends, today I give each of you a wish. One wish only, but whatever you ask, I will grant it.

The birds clacked their beaks and moved their wings until the Glen was full of the sound of feathers; but they fell still when First Mother spoke again.

:Before you ask your wish, though, think hard, and think long. Whatever you ask will be given on to you and to all your descendants for all time. Do not spend your wish foolishly.

And, as the words ended, a beam of light shone out from the glory of First Mother and fell on Cardinal.

:What will you have Cardinal?

Cardinal shied back at first, startled at being the center of eyes, shaken by the light that shown dully on its plain brown feathers. After a moment, though, it spoke out.

“First Mother, I have long been plain. Neither small, nor large, with no interesting markings and no particular song. I would wish, more than anything, to be beautiful. To be of a color so rich that it is noted throughout all lands. This is what I truly wish.”

:So be it, Cardinal.

The light on Cardinal began to intensify and became so bright that all of those in the Glen had to turn away because it hurt their eyes so. When it suddenly stopped, the birds blinked their eyes to adjust to the darkness. As each recovered its sight it turned towards Cardinal, and gasped out at what it beheld.

Where Cardinal had been, dull and brown and plain and unseen, now stood a glorious creature of incredible color! Rich red shown from its wings and around its face dark velvety black. Slowly, Cardinal became aware of the other birds stares and tentatively stretched its own wing out. When it beheld its beauty and its color, which shown out even in the darkness, it was overcome, bringing both wings over its face, body trembling with joy at the change. When it could finally speak, it whispered out, “First Mother, thank you. Thank you from the bottom of my heart, and thank you from all my descendants throughout all time”. At those words, Cardinal bowed low to the ground. 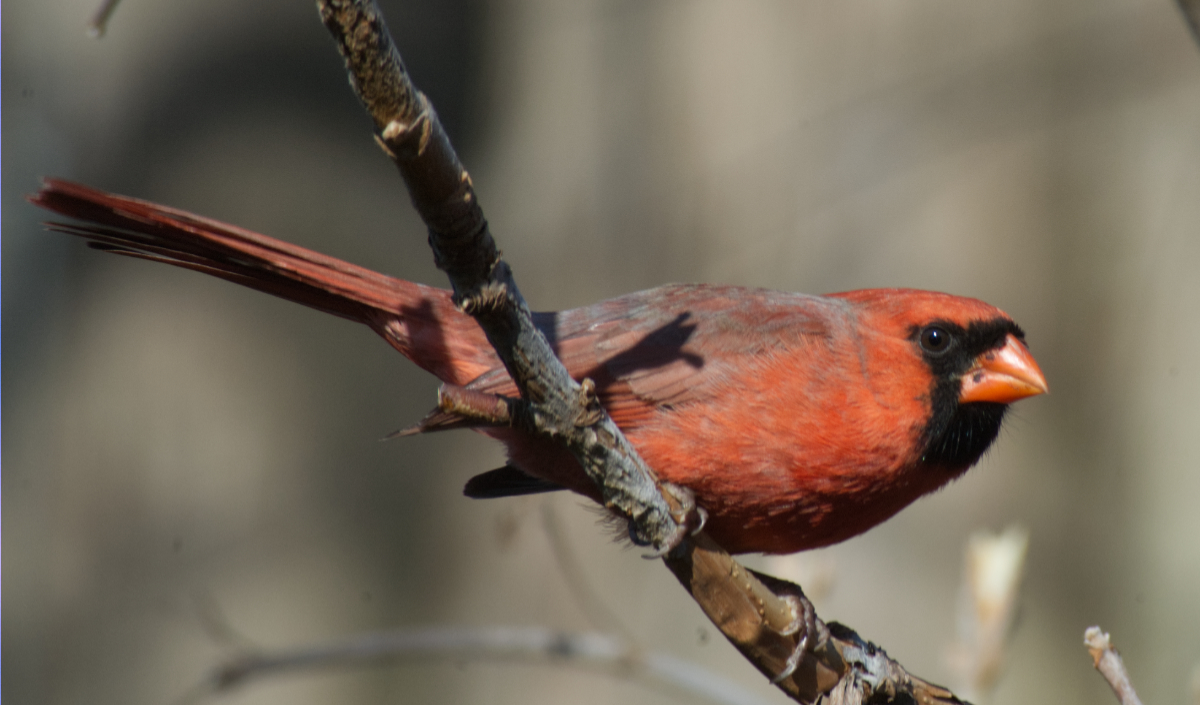 The act was repeated many times. The shining light, the wish, the incredible change. On through the afternoon and through the night and the next day, First Mother granted the wishes of whomever the light shown.

Owl asked to see at night, and Nightingale asked for glorious song. In fact, many birds asked for a special song, all of their own, all unique and beautiful. To listen to each sing their first song after their wish was granted was a glorious experience indeed.

Mockingbird watched all of this in wonder and more than a little envy. It thought it to itself, “I would have liked to have the red of the Cardinal, and the eyesight of the Eagle, and the song of the Nightingale, but they were asked first.”

As time went by and other birds had their wishes granted — Seagull to fly and Penguin to swim and Ostrich to run — Mockingbird’s envy grew, until in the midst of its discontent an idea came to it. The Idea of all Ideas! It smiled to itself, sure that it’s wish would be the best of all. When its turn finally came, when it felt the heat and warmth of the beam, Mockingbird knew what to ask.

:What will you have Mockingbird?

“First Mother”, it said. “I have listened to the song you’ve given Nightingale and Canary and Meadowlark. And I asked myself why should I have only one song, one sound, when I can have many.” Mockingbird boldly looked into the light that was First Mother.

“That is my wish — to have all the songs of all the birds of the world. To be able to hear any bird and any song and sing as sweetly or as cleverly as they do. I want all the songs, First Mother. All of them.”

:Mockingbird, your wish is both vast and shallow. Are you sure of your wish? Are you sure that what you want is all the songs of all the birds?

“Yes, First Mother. I am”, Mockingbird replied, smug in the knowledge that First Mother would grant the request.

:So be it, Mockingbird.

Slowly the air around Mockingbird brightened until it had to close its eyes from the light. A faint shock went through its body and settled in its throat, and it knew that its wish had been granted. As it waited for the light to dim, and to be able test its new abilities, it was surprised to hear what sounded like a sad sigh within the glow around it.

After the beam stopped and the light faded, all the birds looked at it in silence. “This will never do”, thought Mockingbird to itself. “You there, Canary. Sing something!”

Canary moved to protest but of course the protest issued forth as glorious song. And after a few notes, Mockingbird felt something come over it and opened its beak and from its throat came sounds twin to Canary. Canary was so surprised it’s song sputtered to an indignant stop.

Though its song was lovely, indeed, Mockingbird wasn’t satisfied. “You, there, Meadowlark! Sing!”, it demanded.

As with Canary when Meadowlark sought to protest its protest came out as song and soon the sounds of Meadowlark joined the song of Canary, and were eventually joined by Nightingale and Robin and Finch and so on until Mockingbird’s song outshone all of them for it’s intricate beauty and complex melody, one bird’s song after another. Even the trees were moved to silence and ceased their complaints at the wonder of the sound.

The other birds were not happy because what was once uniquely their’s now belonged to another. However, they didn’t complain because to do so would be ungrateful to First Mother.

After all the wishes had been granted and after First Mother left the Glen, the birds dispersed to their homes, some to plains, some to the sea, and some to forest where Mockingbird made its home. Over time other creatures came to the trees and they were eventually joined by First Man and First Woman. Villages sprang up and roads were built. and Mockingbird took delight in siting in the trees near the villages, singing its song, well satisfied when it looked down on the entranced faces that stared at it.

One day Mockingbird was sitting in a tree near the road when an old man and a little girl walked beneath it. It began its song, a complex weaving of Chickadee, flowing into Hawk cry, mixed with the mournful tone of Owl, and ending on delicate otherworldly chimes of Hummingbird. The old man and the girl stopped, caught in the spell of the sweet sound.

“Grandfather, what kind of bird is that, which can sing so many songs!”, the little girl asked.

“Well, granddaughter, that is Mockingbird. And it can sing all the songs of all the birds in the world. In fact, there is no song it cannot hear that it cannot sing.” The old man sighed. “Is it not beautiful?”

“It is grandfather. A lovely sound indeed.”

The little girl listened for a time and then turned to her grandfather, a puzzled expression on her face.

“But Grandfather, what is Mockingbird’s true song? How can we tell which song is true and which song copied if it sings all the songs of all the birds in the world?”

“Granddaughter, the Mockingbird has no song of its own. It’s only sound is that which it borrows from others.” At that the girl seemed sad, and the old man hastened to reassure her. “But isn’t its song beautiful and rich? Why are you so sad?”

“Because, grandfather, the Mockingbird has no song of its own.”

On hearing this Mockingbird’s sound faltered and it fell silent. When the song ended, the old man and the little girl, released from the spell of the music, walked away, leaving Mockingbird alone with its thoughts.