I hadn’t been to a powwow in years and decided to drive down to the Trail of Tears Pow Wow outside of Hopinksville, Kentucky yesterday. 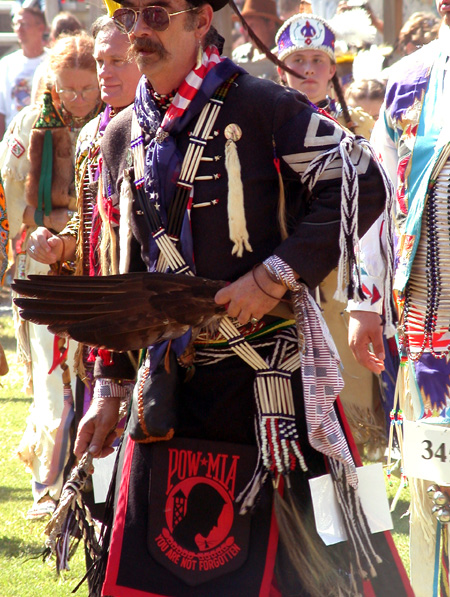 The powwow stage was circular with hay bundles surrounding the area for the dancers, and behind them Singer tents and bleachers for non-participants. Tents selling foods and other goods were placed around the performance area, backs to the bleachers. When the slight breeze was just right, smoke from some of the cooking fires would fill the space left for the dancers and story tellers, like as not re-creating fairly authentic conditions. It was blazingly hot and I felt for the dancers in their regalia as they performed in set after set of Intertribal dances (dances open to all competitors and members of the audience, those who find themselves moved by the sounds of the drums and the singers.)

Powwows are descended from times when tribal members would gather for some reason such as a shaman conducting a ceremony for healing. The word powwow is from Powwaw, meaning shaman. Today, powwows bring together tribal members in dance and celebration, and is a way of interesting young tribal members in their heritage and history. In addition to dance competitions, most will feature discussions about tribal language and customs, as well as story tellers and musicians as well as demonstration of crafts.

The Trail of Tears Pow Wow is primarily a Cherokee event, and was originally held to celebrate the opening of the Trail of Tears Park in Kentucky. This park commemorates the forced march of Cherokees from their homeland in Georgia to a reservation in Oklahoma.

Contrary to the myth of Indian as nomadic hunter/gatherer, Cherokees were farmers and ranchers who lived in Georgia and who had assimilated many of the white ways, including women wearing gowns and the development of their own written vocabulary. They lived in peace with the newcomers to the land, but when rumors of gold arose about the Cherokee held lands, the US Government attempted to coerce the People out of their homes.

Rather than don war paint and ride horses in defiance, the Cherokee donned suits, hired lawyers, and sued – petitioning to be considered a sovereign nation and thus out of jurisdictional control of the federal government. They won the suit and the government was momentarily blocked. To be removed from their lands, the Cherokee would have to vote to agree to the proposed treaty, something most had no interest in. 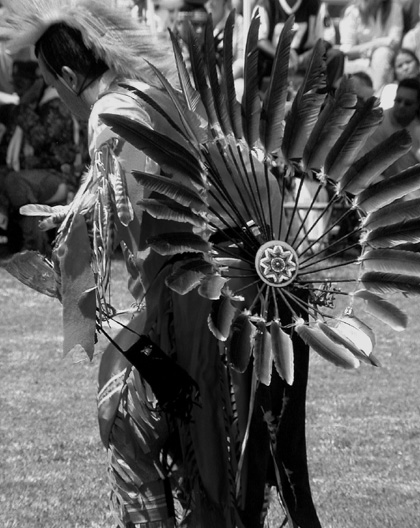 Also contrary to myth, Indian tribes were not all small villages with a strong tribal leader who held sway over all the people. The Cherokee nation was large and there was disagreement among the various tribal leaders as to control of the People as a whole. Principal Chief John Ross fought the removal of the Cherokee people from their lands, but another leader (Major Ridge) of a small, dissident band of Cherokee agreed to the Treaty and that was enough for the Federal Government. The treaty was quickly ratified and the People were forced from their homes, many with little more than the clothes they were wearing.

An estimated 17,000 Cherokee were forced to traverse four separate trails (one by water) to a new home in Oklahoma. Over 4000 died along the way leading the Cherokee to name the event Nunna daul Tsuny or “The Trail Where They Cried”.

A passerby who witnessed the exodus of the Cherokee wrote:

When I past the last detachment of those suffering exiles and thought that my native countrymen had thus expelled them from their native soil and their much loved homes, and that too in this inclement season of the year in all their suffering, I turned from the sight with feelings which language cannot express and wept like childhood then.

I originally heard about the Trail of Tears from my first husband, who is part Cherokee. When I met him, at the age of 16, he’d just returned from a tour of duty in South Korea, adrift in his newfound freedom from military life. He was black haired but blue eyed, lighter skinned but with the strong bone structure that characterizes so many artistic interpretations of how an Indian is supposed to look. If most of us think of Jesus with long, wavy golden/brown curly locks and white skin due to the early artwork from Germany, the same could be said of our mental image of the “noble savage”, based on early artwork from the 1800’s. 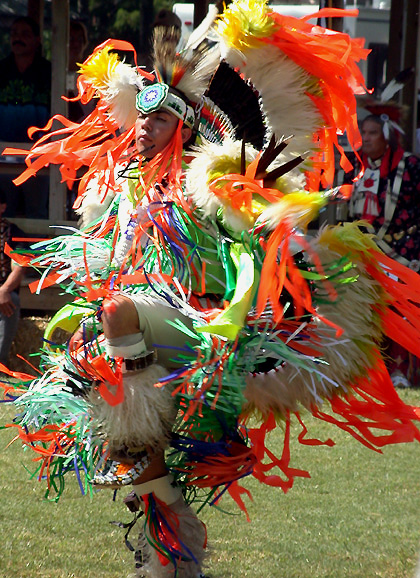 Steve was not brought up with awareness of his Cherokee ancestry as he and his older brother were adopted at an early age by a childless white couple. The two, along with a younger sister, were offered up for adoption when his blood father died and his mother could not afford to raise all of her children.

The story was that Steve’s father had left for the Seattle area for work and his mother followed in a car with all the children, towing a trailer with their household goods. Along the way, she received word that her husband died and she suddenly found herself stranded, far from her people and with little money. To ensure that her children had the best opportunity to survive, she gave half up for adoption – three stayed, three left.

It wasn’t until he was in the military that Steve began to explore his roots, a popular past time in those days. His interest only increased when, not long after he and I were married, his oldest sister contacted us as part of an effort to find the missing members of the family. It was then we heard about Steve’s family, his father and his early death; and his mother, Rose, who had died years before. 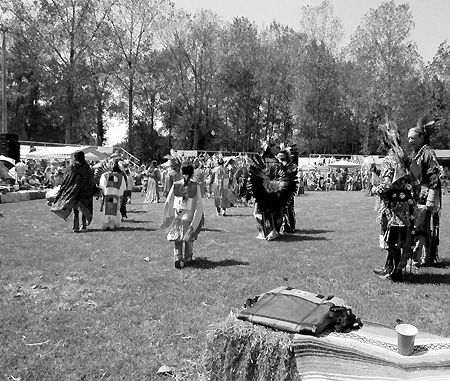 I always wondered if Steve’s mother was named Rose because it was a common name at the time, or if she was named after the Cherokee Rose, the state flower of Georgia. It was said that during the Trail of Tears march that the tears of mothers crying for their dying children were so great, that the chiefs prayed for a sign to lift their spirits up, to help them survive. The Cherokee Rose was taken for this sign.

Most mothers would grieve for the death of a child, but the Cherokee, along with most Native American people, have an unusually high regard for their young. This was demonstrated, again and again, at the Pow Wow on Saturday. One dance I’d never seen before was a birthday dance given by a grandfather celebrating his grandson’s first birthday. He held the baby in his arms and the baby’s immediate family surrounded them as they began a sideways, slow dance around the performance area. Preceding them was a man holding a hat in which to collect tokens or small amounts of money, given in celebration of the child.

As people would drop tokens in, they would traverse the growing line following the family, shaking hands of each member of the line as they passed before attaching themselves to the end. By the time the dance was finished, the line formed almost a full circle around the area. 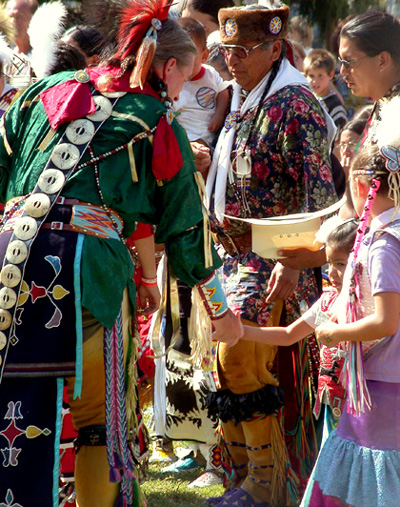 As much as I love the dancing, I love the storytelling more, especially when the storyteller intersperses bits of native language and culture with the tale. Saturday’s Storyteller was very good and told the tale of Spider and Beaver’s Daughter, as well as the story of Raven. He also had a sacred Pipe with him, and spent some time describing each component of the pipe and telling how it was originally a gift from the Creator.

Not all Storytellers are given the responsibility of being Pipe Bearers for their people, so it was a bonus to hear from someone who was both, though the surroundings were not conducive to storytelling. It was unbearably hot in the bleachers, and the predominately white crowd was restless and tended to chat among themselves when the dancing stopped. 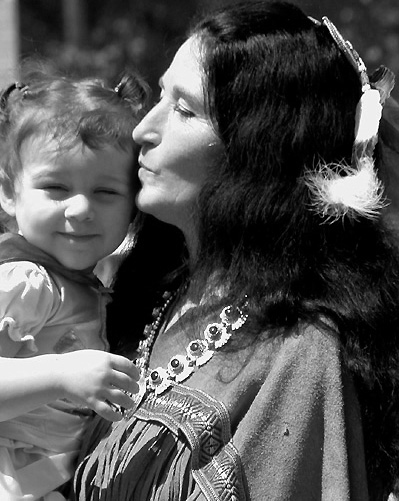