An archive of this page, with comments, is available at Wayback Machine

Saturday was the Artica event downtown, which promised many photographic opportunities. I wasn’t up for the crowds, though, and headed towards the Botanical Gardens to look at leaves turning color.

The leaves were still green except for a sugar maple here and there. The other colors of fall are soft and muted, but the sugar maple screams defiance at the winter. That and the poison ivy, of course, but catch me trying to capture its red color against the blue of the sky. 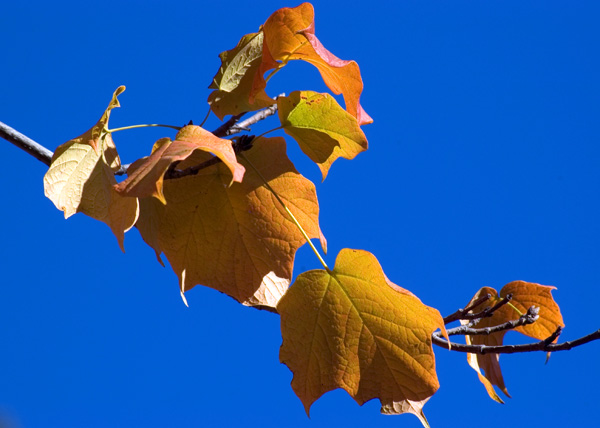 There’s a fountain at the Gardens that the children play in. It’s red brick, with water spigots spaced equal distanced in a curving line on either side of a cement sitting platform. The water rises up slowly into the air, and falls just as slowly back. No one was at the fountain on Saturday; I put my macro lens on and spent 45 minutes taking pictures of the water. My pants were soaked by the time I finished, none of the photographs came out, but it doesn’t matter. 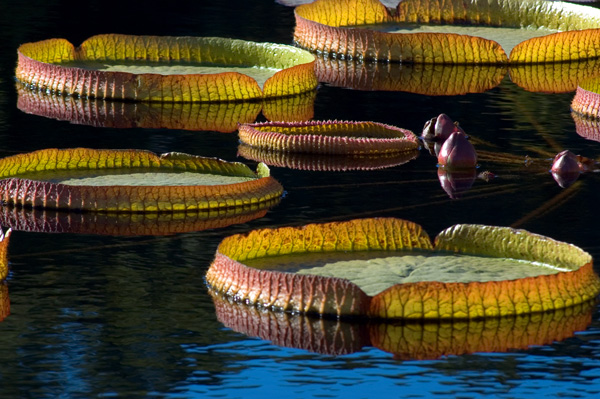 There was music in the air on Saturday, which I followed. A new section of the Garden had been opened—marked off by curly vined fences and centered by a lovely reflective pool. By coincidence, it was the grand opening of the George Washington Carver Garden. Several dignitaries were there for the unveiling of the statue. One such was an older, distinguished gentleman, sitting in a chair, cane handle between his hands. He wore glasses, and he looked oddly familiar, but it was hard to see his face–so many people kept coming over to greet him.

Various people spoke at the dedication, each with their own favorite story of Carver.

Carver was born in Diamond Grove, Missouri, and is one of this state’s favorite sons. Orphaned at birth and born a slave, he still managed to obtain an education. He wanted to study art but was convinced by a teacher that his strengths were in botany. His Garden will introduce young people to botany and, hopefully, open a door to the black community who have, for over a hundred years, refused to enter the Botanical Garden’s gates. As Shaudra McNeal said at one event held here last year, You know Shaw owned slaves. That’s why some people won’t come here.

Three of Shaw’s slaves, a woman named Esther and her two children, tried to run away in 1855. They and several others boarded a small boat pulled up to the levee along the Mississippi to escape to Illinois, a free state. However, they were met by local police on the other side and returned. The place where they attempted to cross has now been designated as part of the historical Underground Railroad.

Shaw kept the children but paid a slave dealer to sell Esther down river in  Vicksburg, Mississippi. I’ve always wondered what happened to her. I looked into the faces at the ceremony and wondered if any were her children’s children’s children. In four years of going to Shaw, Saturday was the first time I’d seen black people in the Gardens.

Before the ceremonies, an older woman came to sit on the bench next to where I stood. After a few minutes, she spotted two women she knew who were sitting in reserved seating close to the reflective pool. She walked over and they greeted her warmly. They were black, she was white. They had an empty seat near them and invited her to join them. She hesitated because it was marked ‘reserved’, but one lady patted her arm and said, “…that’s alright, we can sit here. We’re privileged.” One of the seated ladies moved over to make a spot for her, and she sat down between them, her hand on the arm of one, while the other hugged her closely. And that’s how they sat during the ceremony: three old women, two black, one white, arm and arm.

The master of ceremonies began introducing the different speakers, including a local historian and expert on Carver, a minister, the director of the Gardens, and finally introducing the older man I had noticed earlier: he was the actor and opera singer, Robert Guillaume. He had been invited to read a poem in honor of the occasion.

Guillaume made his way to the podium in slow, stiff steps, leaning on his cane. His voice was soft and his words halting at times, but still beautiful to hear. He mentioned growing up in St. Louis and how happy he was to have been invited to attend the dedication. Then that lovely, wonderful voice, unimpeded by the stroke that halted his footsteps, came over the speakers; reading Carver’s favorite poem, Equipment by Edgar Guest:

Figure it out for yourself, my lad,
You’ve all that the greatest of men have had,
Two arms, two hands, two legs, two eyes
And a brain to use if you would be wise.
With this equipment they all began,
So start for the top and say, “I can.”

Look them over, the wise and great
They take their food from a common plate,
And similar knives and forks they use,
With similar laces they tie their shoes.
The world considers them brave and smart,
But you’ve all they had when they made their start.

You can triumph and come to skill,
You can be great if you only will.
You’re well equipped for what fight you choose,
You have legs and arms and a brain to use,
And the man who has risen great deeds to do
Began his life with no more than you.

You are the handicap you must face,
You are the one who must choose your place,
You must say where you want to go,
How much you will study the truth to know.
God has equipped you for life, but He
Lets you decide what you want to be.

Courage must come from the soul within,
The man must furnish the will to win.
So figure it out for yourself, my lad.
You were born with all that the great have had,
With your equipment they all began,
Get hold of yourself and say: “I can.” 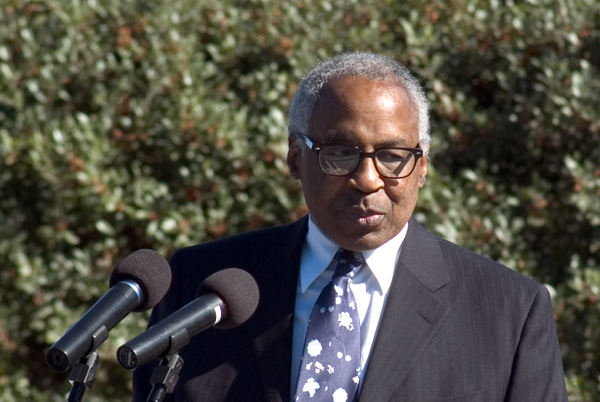 There wasn’t a large group of people attending the ceremony and after the statue was unveiled, we were invited to view it more closely and meet the speakers. Standing on the platform, I finally turned away from looking at the statue to realize that Guillaume was, for the moment, not surrounded by people. I hesitantly approached him, and gibbered something along the lines of, “Sir babble babble honor gibber gibber Phantom babble gibber wonderful.” Luckily he spoke Fan and could decipher what I was saying. He was incredibly gracious.

My favorite picture of him was when he signed an autograph for the television cameraman. 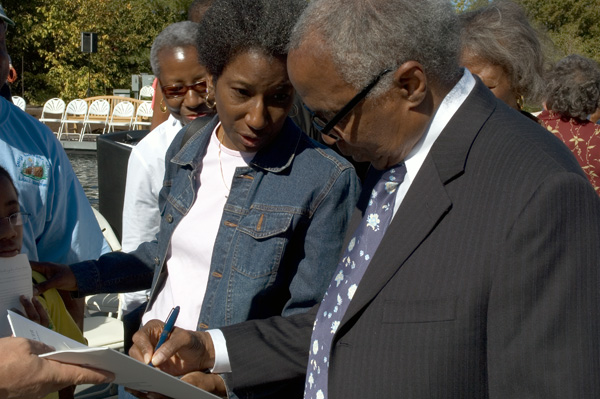 You are the handicap you must face,
You are the one who must choose your place,
You must say where you want to go,
How much you will study the truth to know.

I don’t care much for Guest as a poet — too manly man for me. But such complex truth in so many simple words. If I had gone to Artica, I never would have heard Guillaume say these words. I guess the luck was with me, though I’ve not been a believer in luck. Loren Webster wrote something on luck recently when he discussed the Elizabeth Bishop poem, One Art, which starts with:

The art of losing isn’t hard to master;
so many things seem filled with the intent
to be lost that their loss is no disaster.

It’s a wonderful poem; resigned but not defeated. Loren speaks of loss and luck, writing, I still remember that period in my life when I repeatedly played Ray Charles’ version of “If It Wasn’t For Bad Luck,” I wouldn’t have any luck at all, and ironically referred to it as my theme song.

Things often have a way of righting themselves, though it certainly doesn’t seem that way when you’re in the middle of a losing streak. Unfortunately, for some people things never do quite right themselves, and who can blame them if they’re left feeling lost and alienated?

Feeling lost and alienated can also be an opportunity. 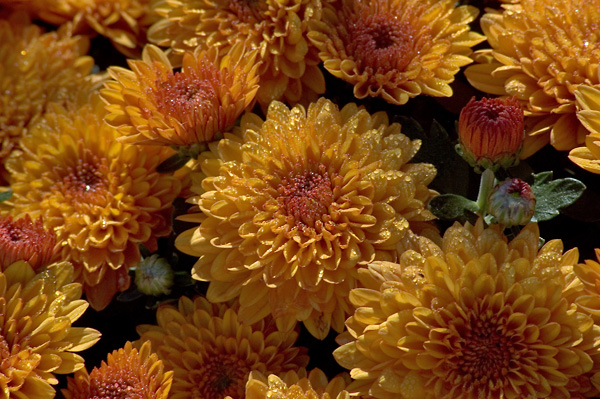