This week we’ve reeled from one outrage to another.

First, it was the letter DHS IG Cuffari sent to Congress, asserting that Secret Service people deleted texts after his department requested them. Followed by a claim that North Carolina is passing a bill making women who get abortions into murderers in the first degree. Then it was AG Garland sent out a memo that demonstrates he won’t charge Trump. This occurred in parallel with another outrage: Politico breathlessly claims that anti-abortion states will use geofence warrants to discover who is getting an abortion.

There were also assorted and sundry pronouncements, accompanied by exclamations and shouts of “How dare ____!” You fill in the blank.

Things aren’t great right now. We have an excessively dangerous political party controlling an increasingly dangerous court. We’ve already lost one right, bodily autonomy, and we fear we’re on the precipice of losing others.

At the same time, though, we’re going to miss the real dangers if we spend all our time up in arms about phantoms.

The items I just described are all good examples of these phantoms. They sound plausible, they imply danger, and the outrage us. But when you look more closely, the risks are minimal, the dangers not apparent. The outrage is more about driving attention than effecting change.

And, as expected, people are finally, finally beginning to question Cuffari, and his motives.

So, am I wrong on this? Yes. The texts were deleted.

At the same time, I do no believe this action was based on some controversy,  covering up attempts to hide some agency-wide conspiracy to support Donald Trump. No, anyone who has ever made a major roll out of new systems in a large corporate setting will recognize what happened here.

The Secret Service deserves the flack it’s going to get. But no, the only controversy here is why Cuffari decided to send his letter last week, when he knew about the texts last year.

The Secret Service has had problems, not the least of which their behavior while on location. But there’s never been any indication of widespread support for treason in the ranks. A couple of agents wanting to get Pence into a car so they can move him to a place of safety is not an indication that the Secret Service is some form of shadow agency seeking to undermine our government.

So when Inspector General Cuffari sent a letter to Congress—totally out of the blue—making a claim that the Secret Service deleted texts about January 6th, and did so when his department asked for them, it called for us to examine the letter and its intents objectively. Unfortunately, this didn’t happen.

Funny how people ignored some plain facts right in front of us. Facts, such as IG Cuffari being a Trump-appointed IG who has been heavily criticized for not doing his job; whose department is under investigation; who received a letter himself recently from Congress; who came to the job with some red state experience and a diploma from a diploma mill.

They also ignored the statement issued from the Secret Service, bluntly denying Cuffari’s claims; that if some texts were deleted it was because of a standard phone upgrade, and it doesn’t matter anyway, because the texts he mentioned were never deleted.

How do we know they were never deleted? Because when the House subpoenaed the texts, the Secret Service stated they would turn them over the very next business day after receiving the requests.

Why would Cuffari come out with this letter now? Oh, I don’t know, but I have a guess. Both Republicans and the media were on the hot seat because of the outrageous claims they were making about a little 10-year old rape victim getting an abortion in another state because of the SCOTUS actions.

Then there are all those calls for Biden to fire Cuffari.

But this is all just a guess.

This one now has an official Fact Check entry.

This one came to us not from the professional media, but one of the Twitter talking heads. A talking head who has since deleted the tweet, but I managed to capture a shot. 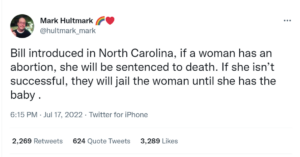 Even though he deleted the tweet, his work was done: the thing has legs. Just search on Twitter for “North Carolina abortion murder”.

You know what this is based on? Someone in the North Carolina legislature introduced a bill to add a state Constitutional amendment defining that people are people from conception and anyone that kills people is guilty of murder.

From this, Hultmark built up the claim that women be jailed until forced to give birth or sentenced to death if they aborted.

Folks, here’s the thing about state legislatures. They all have nutcases. Every single one has at least one fringe element who is typically ignored. Fringe elements file bills. Sometimes they file a lot of bills. And do you know what happens to these bills?

They die in committee. This particular bill didn’t die just once, it died twice.

Now personhood for fetuses is a real threat. We know states are introducing personhood for fetuses in their legislation. But not even this crazy GOP is crazy enough to put something like this into law. In fact, the GOP is twisting itself into a pretzel trying to say that aborting an ectopic pregnancy isn’t really abortion. Or that a 10 year-old terminating a pregnancy really isn’t getting an abortion.

The one thing the GOP does not want is even the remotest possibility of jailing pregnant women until they give birth, or executing a woman who gets an abortion. This is the bridge too far for the American populace, and the GOP knows it.

Bills are passing right now that are a danger right now. Our attention should be on them. Not a bill introduced February of 2021 that died in committee.

Maddow, Garland, and the Memo

This one is a bad one on Rachel Maddow. She discussed a memo that AG Garland released that seemingly re-affirms a memo AG Barr put that ‘talks about the importance of avoiding “partisan politics” in decisions regarding investigations and criminal charges and protecting the agency’s reputation for “fairness, neutrality, and non-partisanship.”‘ 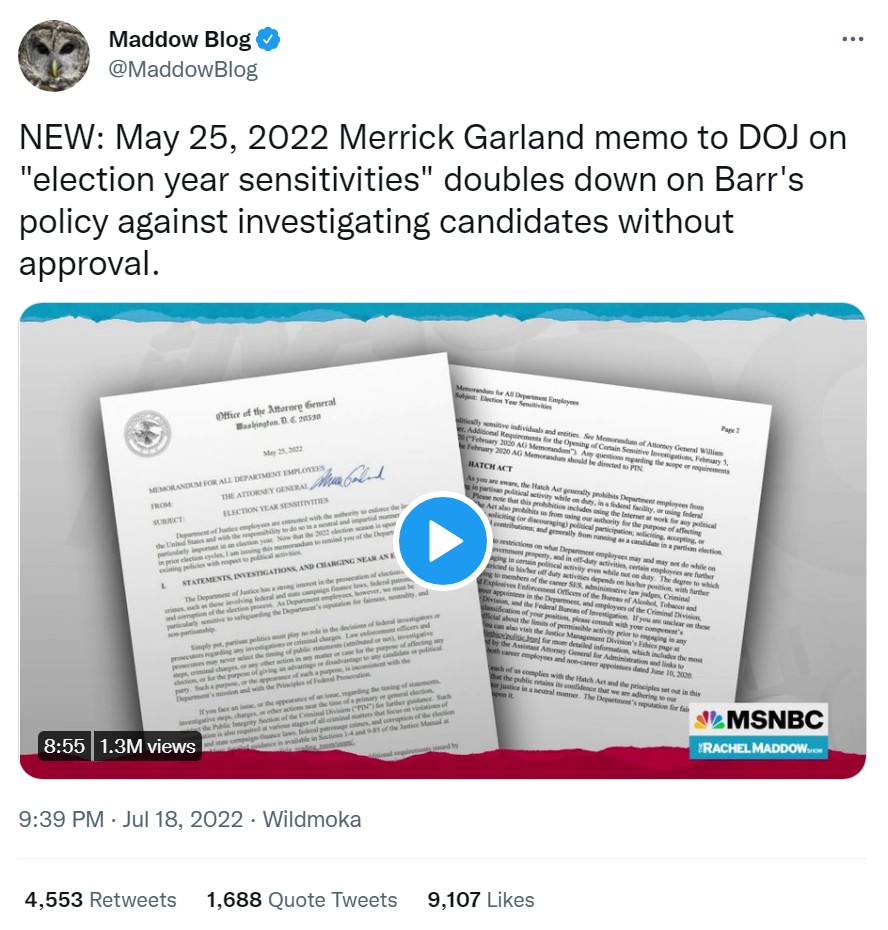 But, as others have noted since, this memo is boilerplate, standard, has been around for many administrations, and is no big thing. 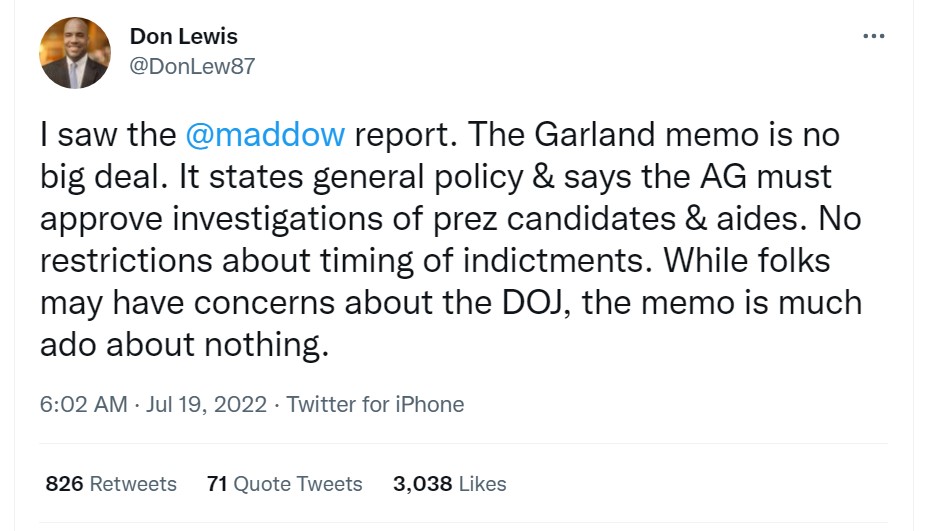 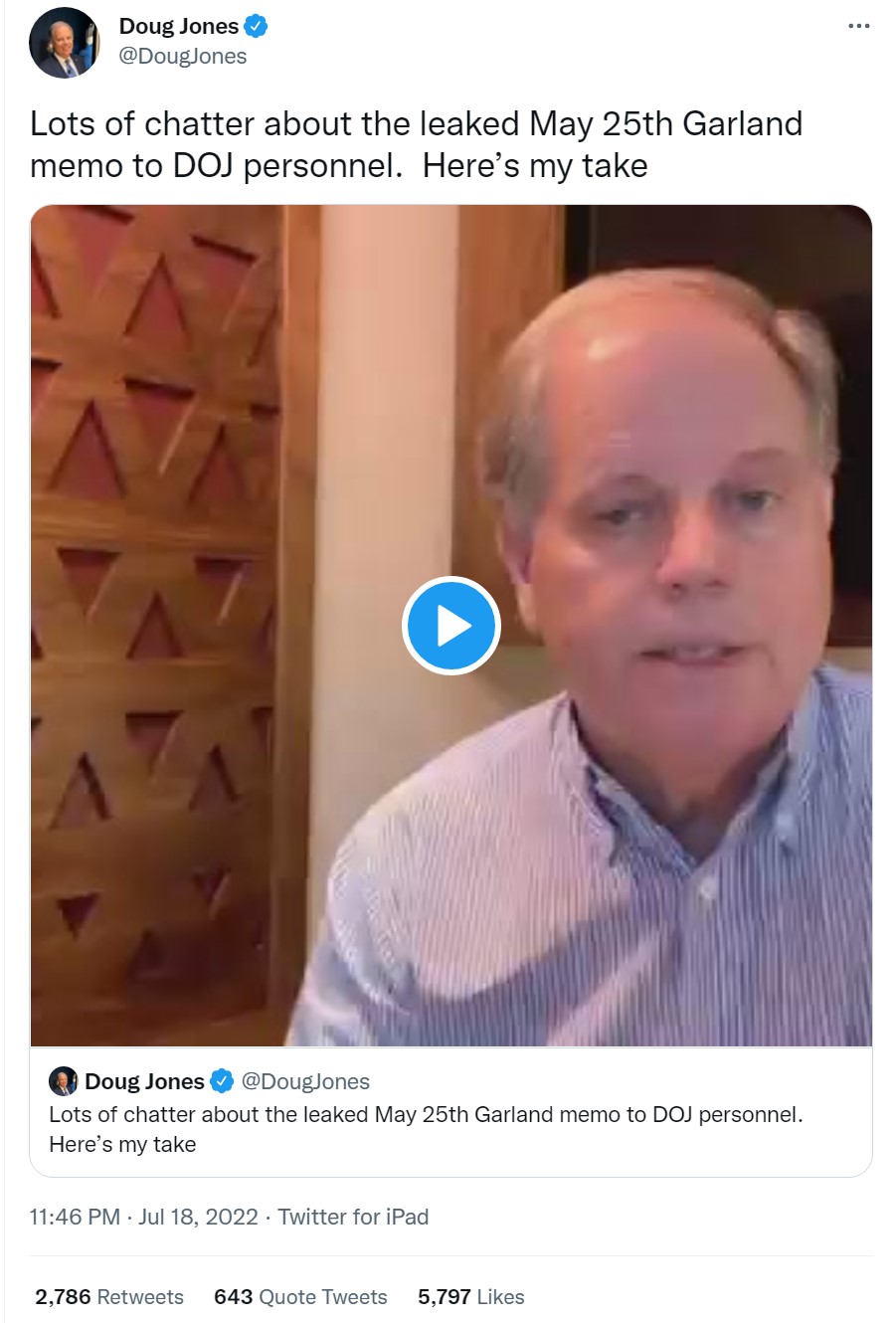 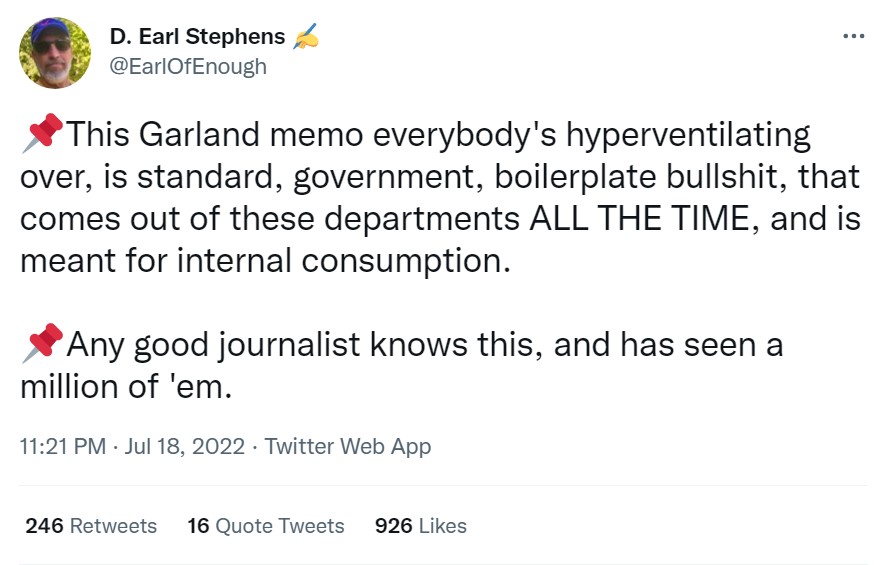 I could go on, but the point has been made. Maddow and folks: do better.

This was Politico click bait. The publication is notorious for this.

First, a geofence warrant is based on a specific event. What police do is when there’s an event like a murder or bank robbery, it goes to a company like Google and asks for data for smartphones in the general vicinity of the event at a certain time.

First, though geofence warrants are overly broad, they’re not completely without boundaries. These warrants are for cellphone data in the vicinity of a specific event within a specific period of time. They’re not endless trolling of all location data near abortion clinics that somehow will get tracked back to women in the state who may or may not be pregnant.

Even the reddest judge won’t stomach what will end up being a never ending netting of generalized location data for all time.

The example Politico used is anti-abortion people using ads to target people near an abortion clinic. This is nothing more than one company who used location data to display location-specific ads, who then got its ears pinned back by the Massachusetts state’s AG, and who promised to never, ever do that again.

There was no warrant related to this action. There couldn’t be, because there’s no event. Only the location.

That’s the key: there’s a difference between a generalized display of ads on your phones because of location and a police force vacuuming up all data for all smartphones in areas outside of their own jurisdiction in order to somehow capture that one woman that got away.

And how would these police be able to track woman A going to location B in order to do C? If you think they’re going to get search history data for anyone and everyone who searches for the word ‘abortion’, and then somehow magically trigger that into a warrant to wait to see if this same woman appears at any of the thousands of abortion clinics still operating in the country, think again.

Frankly, not even Alito or Thomas would stomach this one. OK, well, maybe they would, but I suspect Gorsuch, Roberts, and Kavanaugh wouldn’t want to come anywhere near it.

I understand that people are wary and a bit paranoid, and frankly we should be considering the GOP is redefining evil daily, and SCOTUS is off its rocker.

But if we spend all of our time in a state of outrage over events that really aren’t outrageous, we’re going to burn out. Our senses will become numb. We’ll be drowned out in that chorus of “How Dare They!” and miss the real threats that come at us.

So when you hear a story that triggers outrage, just stop for a moment. Before you retweet, reply, share, or blast out to your followers, take the time to think about you just read or heard; to consider the source; to do a little googling of your own to see how very real the outrage is.

We all want to be the firstest with the mostest, but I would hope that it’s more important for us to raise the alarm when the alarm really does need to be raised.