My early days as a mineral and crystal collector would find me at Earthlight in Kirkland on a regular basis. This shop was full, floor to ceiling, with rare and wonderous crystals from throughout the world. Not just minerals in raw form – the owner also carried rock carvings, jewelry, and other odds and ends.

The owner knew the mystical properties of each of the minerals, and about half the shop was devoted to those crystals favored more for their healing properties than their value as a collectible item. I, however, would spend my time among the closed and locked cabinets for serious mineral collectors that the owner, Jack, would unlock for me once he got to know me.

(Everyone had a crystal for health or spirituality in those days. When I told people I collected crystals, I would hasten to add that mine were psychically dead.)

One Saturday I was gazing through his new additions, trying to decide which to take and which to regretfully leave behind, when I saw this odd looking little rock in the corner of the cabinet. At first, I thought it was a bit of the packing material, because it was fuzzy and white and not like any crystal or rock I’d ever seen before.

I picked it up, and touched it to see if it was brittle, but it felt soft. I was stroking it again when Jack called out, “Don’t stroke that. It’s very delicate and you’ll damage the crystals.”

I looked more closely at the rock and sure enough I could see little thread-thin crystals radiating from it.

To hold the rock is to want to stroke it. The rock’s shape vaguely resembles a kitten, which only added to the overall urge to run my finger down it’s side.

I guiltily stopped in mid-stroke and looked down and it’s true, the rock seemed a tad less fluffed out then originally. “I’ll buy it, Jack.”

He waved his hands at me and laughed. “Go ahead and pet the rock all you want, then.”

It’s not worth a lot of money compared to the azurite and dioptase, aquamarine, and rhodochrosite, but it’s a cute little bugger. 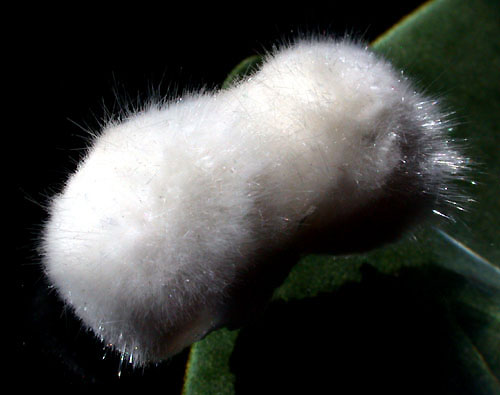