I had been keeping my version of Photoshop current on my Mac, but not my Windows. When I saw an upgrade package at Amazon that would upgrade my Windows 5.0 version to CS2, I decided to get it. A day wasted later, and oddly enough, talking to what sounds like the same people Chuqui talked to, I found that there are certain installers on Windows that just won’t accept the serial number, and the support person at Adobe would have to manually generate one for me. I asked if the same number would work if I needed to re-install the CS2 upgrade, and she said no, I’d have to call in again if I needed to re-install CS2 on my Windows. I would also have to provide my complete purchase history for Photoshop on Windows, including keys for software bought 6 years ago.

For Chugui, the experience began with the mistaken belief that if all you want to use in CS2 is Photoshop, one should be able to just upgrade Photoshop, especially when Adobe sells upgrades for Photoshop. You’d think…

The first one’s job was to tell me that no, in fact I could NOT upgrade a CS2 package to just Photoshop (but, I asked, what about your web site that says I can? I never got a straight answer about that, actually, just told that it wasn’t possible). I finally decided the hell with it and decided I’d wasted enough time — and maybe I might use Dreamweaver here or there — so I went ahead and decided to go to CS3.

That third guy’s job was to let me know that they couldn’t actually just amend my upgrade, I’d have to buy the CS3 upgrade, and then they’d refund me my original upgrade.

Of course, you can imagine what happened when Chuq tried to get a refund.

Adobe believes it has a lock on the graphics and photo editing world with Photoshop, and is using it to force people into buying what they don’t need. I’ve thought about upgrading my CS2 installation on the Mac (never again on Windows), but after listening to some of the problems people have had, have been reluctant to plunk down yet more money. Especially since there’s been so many issues related to upgrading Photoshop, as compared to upgrading the CS ‘suite’.

Now, I do like Lightroom more than Aperture, and I really like Adobe Bridge. I can live without Lightroom, though, and my Adobe Bridge still works. I’m finding that what I have with my current software is more than good enough, so I’m reluctant to do anything at all; just use what I have until forcibly kicked off in some way (probably some incompatible Mac OS upgrade). Frankly, I just can’t keep up with the expense of all these upgrades — especially when I’m maintaining three computers (two Macs and a Windows).

I’m also turning to open source for my needs more frequently. I’ve made the transition to NeoOffice for my Office replacement on the Mac and have never looked back. The software is stable, easy to use, and improves with each release. I also like OpenOffice for Windows, and have had no problems using it with my Windows XP box (I also am holding on upgrading to Vista).

For the new book, instead of putting any time into Photoshop, I decided to cover GIMP and other tools, instead. There is an installer for GIMP for the Mac that works nicely, but instead I installed Darwin/Mac Ports, and then installed both GIMP and UFRaw, the wonderful tool for handling RAW images, using the Ports installation program. Both installations went through without a hitch.

I also installed GIMP and UFRaw on Windows, using the ‘dummies’ installation for the latter and, again, no problems with the installation (though I don’t know if either will work with Vista). 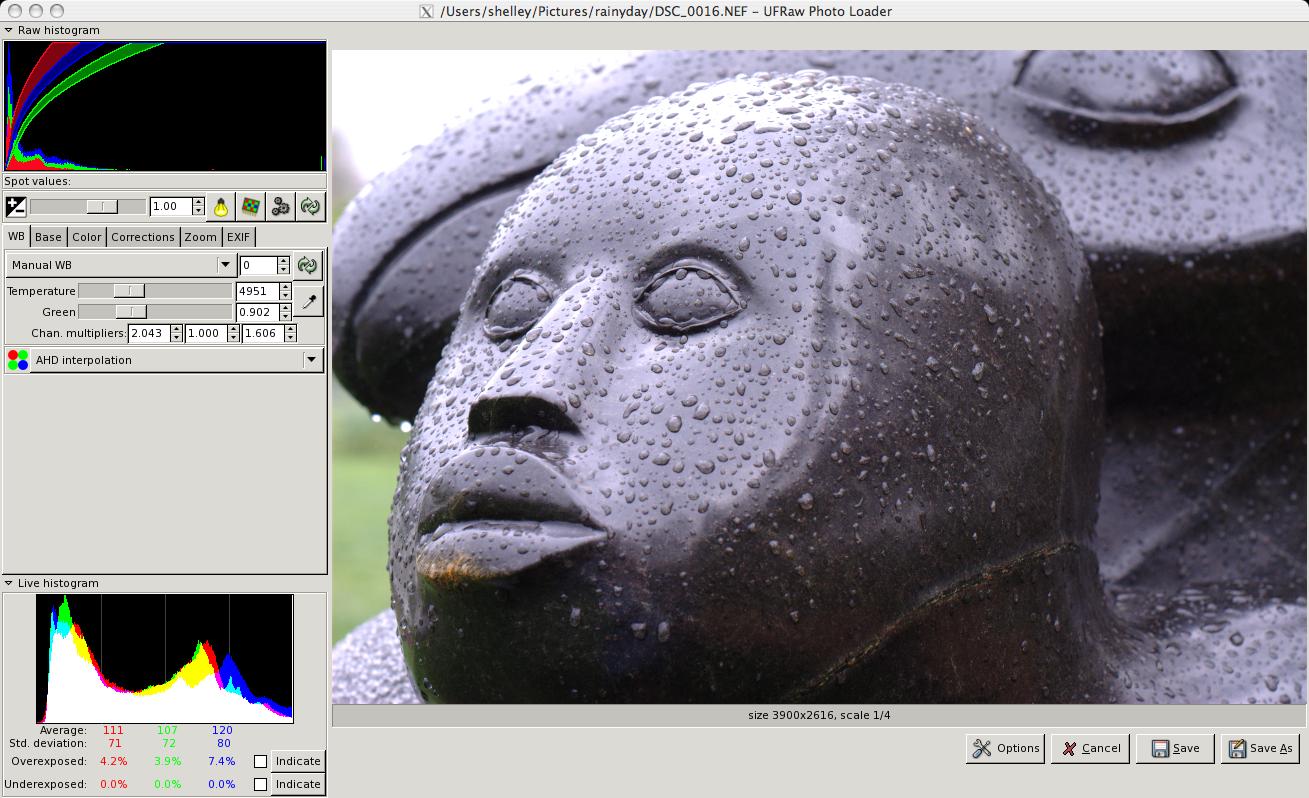 What do I think of the tools? I really like UFRaw, and from what I can see, it handles my Nikon NEF files to a treat. I think I actually prefer it over Adobe’s plug-in, as it seems to manage white space better.

GIMP isn’t as fully featured as Photoshop. It’s not as simple to work with as Photoshop, but much of that could be my unfamiliarity with the tool. It doesn’t have the color support, or the Smart Sharpen filter, nor does it seem to support free transformations. However, the unsharp filter seems to work decently, and I can find most of the transforms I need by looking through the other tools. In addition, GIMP is very much a ‘living’ application, which means new filters, plugins, and versions are continuously being developed. 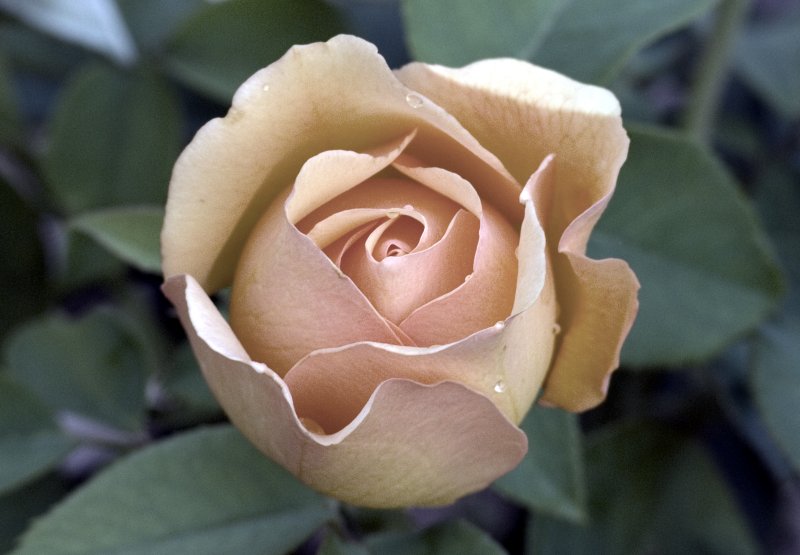 As for graphics, I was able to immediately create a ‘shiny’ Web 2.0 button, as well as re-implement the reflection technique I had picked up for Photoshop. In other words, it provides all I need for the effects I create.

You also don’t need a desktop tool. I recently discovered an online graphics tool, FixPicture that can take my Nikon RAW images in NEF format, and allow me to add any number of edits, saving the result to any number of formats. 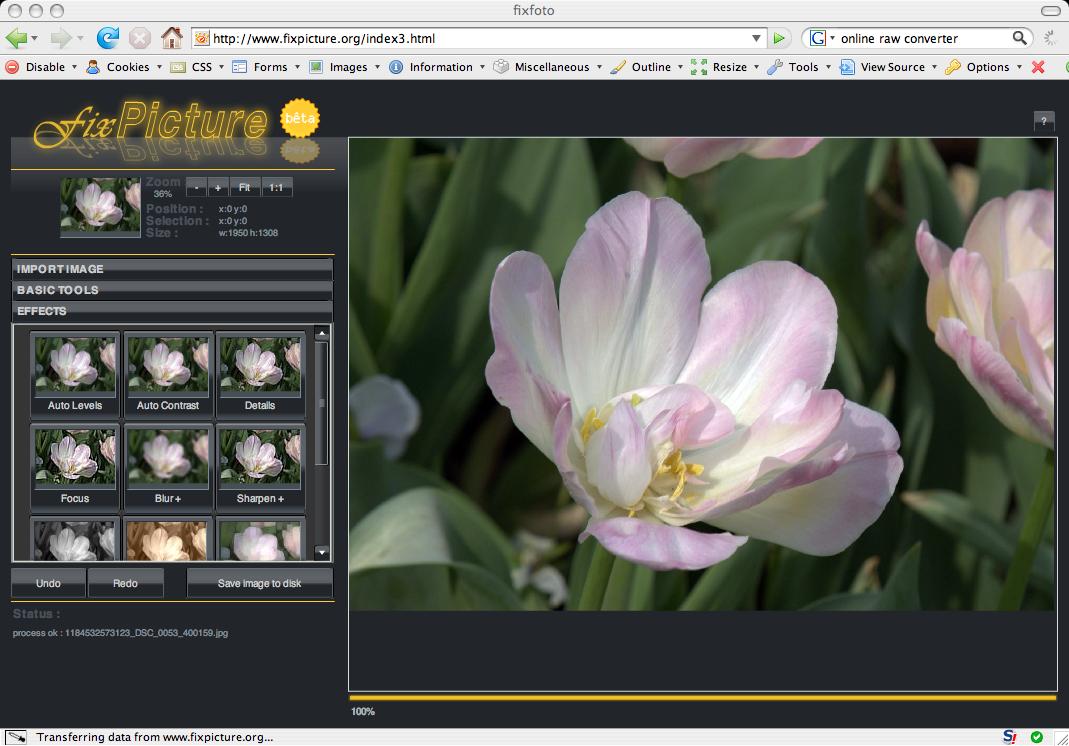 I can’t speak for professional photographers and graphic artists, but I can’t help thinking the amateur photographer and web developer/designer who does some graphics, would get all they need from the open source community, rather than having to pay the Adobe tax. Not just GIMP and UFRaw–there are dozens of interesting single and multipurpose tools and utilities that allow us to create all sorts of interesting work; all open, all free except for what you can spare by way of donation.

I’m not adverse to proprietary applications or companies who profit from such, but when a company’s proprietary acts cross over the edge to the predatory, like Adobe’s has with Photoshop, I think it’s time to look elsewhere.