I don’t do much bird photography anymore. We’ve had many less birds this year, after the loss of so much seed crop with last year’s bad weather. Our song birds are shy, too, preferring to hide among the brambles and brush. However, I spotting a pair of red tailed hawks I thought I’d try to photograph and dragged my large telephoto lens over to Powder Valley.

When you take your camera, with the big and heavy lens, you won’t see birds, isn’t that the rule? I spotted a few nuthatches, several cardinals, a Steller’s Jay, mourning doves, and what looked like some form of falcon, but too far away for pictures. Luckily, though, I had my camera pointed in the right direction when what I thought was the falcon, cricked its wing tips to bring it in for a landing–long enough for me to grab one single photo. 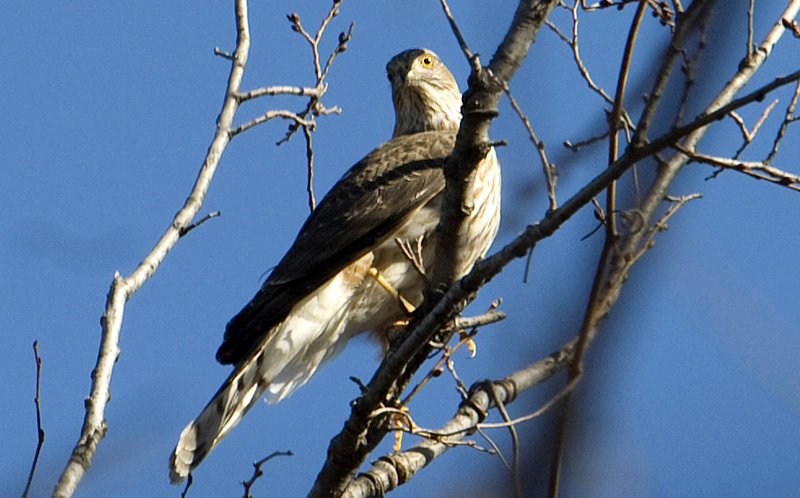 I wasn’t sure what the bird was. At first I thought it was an osprey, because it crooked its wings in a way similar to an osprey when flying. After looking at various photos, though, I believe it’s a Cooper’s Hawk, a rare, endangered raptor native to our state. It also looks similar to a sharp-shinned hawk, but it was much larger than these birds–much closer to crow size, than jay. If you have another identification, please let me know.

The photo was the first half-way decent one I’ve been able to get of a bird in months. This has not been a good year for birds, so much so that I’m thinking of selling my telephoto, a Nikon AFS VR 70-200mm F2.8 on eBay. I don’t take bird photos very much, and though you can use other settings, the thing is so bloody heavy it’s tiring to use. It’s really meant to be used with a tripod, but I don’t care much for tripod work.

I like my 50mm fixed length lens, and have been thinking of getting an 85mm, though I’m still trying to wrap my head around the sensor sizes and equivalent lens issues. Perhaps what I really need is a 35mm. Or more birds.