While in San Francisco, I visited my favorite haunts such as Crissy Beach, including Fort Point at the base of the Golden Gate Bridge. I like to watch the crazy surfers avoid being smashed against the rocks, and the sea lions sitting back, trying to figure out who these interlopers are.

One of the surfers had brought his dog, a loveable mutt who seemed fierce but was very gentle and friendly. I was watching the surfers when I could hear someone behind me talking to the dog. I turned around and there was a young soldier, gun strapped to his chest, playing with the pup. I hadn’t even noticed the military Humvee and the soldiers assigned to protect the Bridge.

The soldier was very friendly, and I asked him if I could take a picture of him and the dog. While taking it, I noticed that the dog’s owner was also taking a picture, and his expression probably mirrored mine to some extent. I could see that he appreciated the soldier’s enjoyment of the pup; but at the same time, he was disconcerted at the proximity of the gun, and the soldier, and the military vehicle. 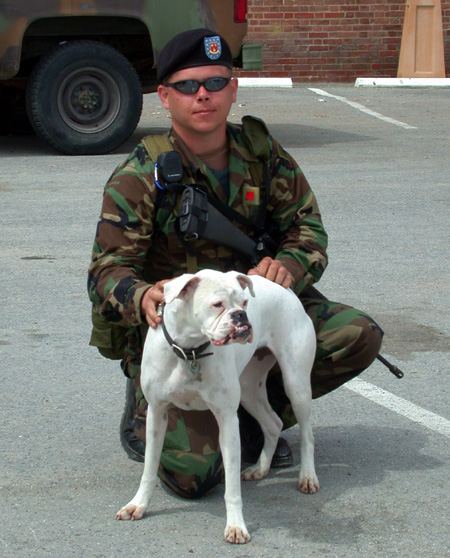 Perhaps it was the soldier’s presence, but when I left Fort Point, I decided to drive through the Presidio and visit the National Cemetery. I’ve always liked walking through the Cemetery, reading the stones and admiring the fresh flowers brought by loved ones. Outside of Memorial Day or other patriotic holidays, the Cemetery at the Presidio rarely has anyone around, and one can move about easily without having to fight the hordes of tourists. 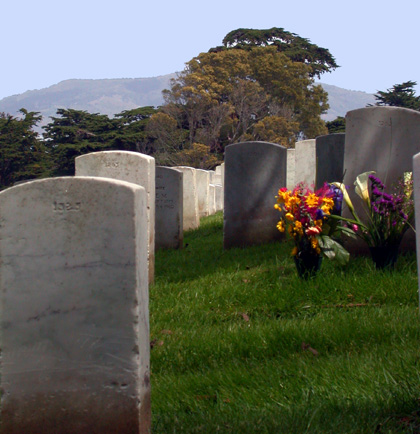 In the middle of the cemetery is the POW-MIA flag, the flag raised in honor of those listed as Missing in Action, and those who have been prisoners of war. Seeing it reminded me of the release of the seven POWs in Iraq, which has filled the news recently; videos showing them riding around on a jeep waving small American flags, meeting with the President, hugging loved ones. There was even talk about a special White House dinner for the seven, and most likely to include Jessica Lynch, the soldier who had been wounded and ‘rescued’ from an Iraqi hospital. 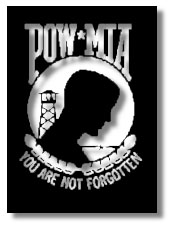 I thought about the POWs from previous conflicts, such as Vietnam; how many of whom were in prison camps for 20 or more years, starved, beaten, tortured, and subjected to the worst crimes of humanity. One of the most famous, Senator John McCain has since had to battle serious skin cancer from the exposure to the hot sun in the Vietnamese jungles. My own Dad suffers from skin cancer from the same exposure, as well as other cancers from exposure to Agent Orange.

We as a nation let down our soldiers in Vietnam. When the POWs and other soldiers came home from that time, few met the President, or were invited to the White House. Same for Korea. Even fewer received the medical and psychological attention needed to make a good recovery from the trauma. As a nation, we’ve suffered the guilt from this and remember our poor treatment even more than the horror of the war. In the first Gulf War we tied yellow ribbons around our trees and flew huge flags. In the recent Iraq invasion, we tied even more ribbons, flew even more flags, and added music and sound spots, and the country literally bled red, white, and blue.

It’s not surprising with this national guilt that we’ve made the Iraqi seven and Jessica Lynch into something almost super-human, with stories of firing guns until falling in battle, and hints of dark doings on the part of the criminals holding our people. The reality, we are finding, is much different.

Chances are you won’t find a lot of long time service people behind all of the hoopla around the ‘victory’ in Iraq and the seven captured service people, or Jessica Lynch. The reason isn’t because they don’t care about these young people, they do, very much; however, they know to put a sense of perspective around all of this. The wars we’ve fought in the past have cost the lives of hundreds of thousands, have taken people away from their families for years, and have left prisoners behind bars for decades. There was a heavy price to pay for these wars, which serves as a dark reminder that we should never take war lightly. All service people from all wars and all duties, including the young man guarding the Golden Gate Bridge, deserve respect and appreciation — not a media circus full of as much blather as bravery.

If we don’t remember that the prize many of these soldiers win is a room with a view, then we take the pain out of war. A leader of this country who sends his people to war should come out of it weighed down by his or her decision, not lifted up on the shoulders of a bunch of kids who took a wrong turn on the way to Baghdad.