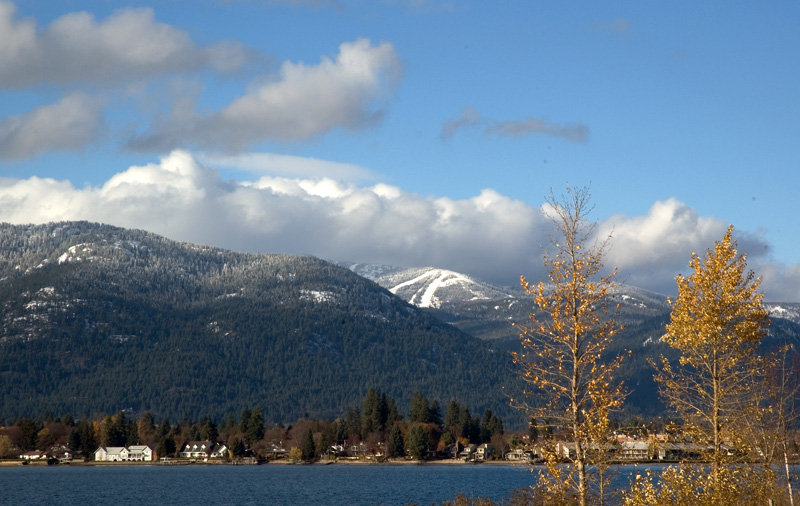 The Friday after we moved into the new house, the very day after we unpacked the last box, I got a call from my brother: my mother had died. What followed was a frantic two days trying to arrange for a potentially long trip to Sandpoint, Idaho, in the midst of a snow storm here in the Midwest. Both my brother (who lives in Indiana) and I scheduled a flight out on Delta the following Monday. Delta sent his delayed notice out before he went to the airport, but I was already at Lambert. Fifteen hours later, we both finally crawled into Spokane, and got the rental car 15 minutes before they closed.

Luckily there were no moose, elk, or deer on the roads during the car ride, because I was too tired to miss them if they suddenly appeared. We got to Mom’s house, found the key hidden by the neighbor, and fell into beds.

The next day, I looked around, overwhelmed at all we had to do. My brother took on the work to arrange the funeral, while I started going through the paperwork I could find. I was Mom’s executor, and needed to find the will and other papers. Mom had an interesting filing system. Some of the papers were in a file folder, some in a desk, and rest squirreled away among her paint supplies.

My brother has work responsibilities and had to leave for home that weekend. I was left with a house full of furniture and memorabilia and paintings from a life lived 82 years. This, on top of all the paperwork that has to be managed. I didn’t know where to start. That’s when the neighbors appeared. They brought food and offers of help; especially Sam from two doors down and Colleen across the street.

As I started clearing material out, Sam would appear with his truck and take what couldn’t be salvaged to the dump. He also suggested the Panhandle Animal Shelter’s thrift store for the clothes and kitchen stuff, and Habitat for Humanity for the garage and garden stuff. And he and his wife, Lisa, would stop by with their dogs, their gentleness, and their stories of Mom. I fell in love with Siri, their 13 year old dog.

Colleen knows everyone in Sandpoint. She suggested Home Sweet Home for the major furniture and collectibles. Rich from the store took most everything except for what I affectionately referred to as the monsters: the electric organ, the piano, the 171 pound rear projection TV, and this nine foot tall lamp with three large glass lotus shaped lights that hang over you. As Sam noted: it reminded you of a pink, glass, alien monster from space. No one, but no one wanted the monsters.

Colleen went to town. She found folks to take the beds, and when the young couple showed up to take one, the woman spotted the lotus lamp. When last we saw it, it was sitting in the back of a truck, her proudly holding on to it, big lotus flowers hanging over the cab. Sam was walking his dogs when they went past. The look on his face was priceless.

But Colleen wasn’t finished. The TV and organ went to a bible camp, for youth activities, the beautiful, mother of pearl accordion went to the music conservancy, and the piano went to a friend of hers, who needed a bit of cheer, herself.

We needed movers for the monsters. There were the Millers at the country store nearby. Mennonites. They also had a moving company. Monsters were helped on their way to their new homes on gentle but incredibly strong and capable arms.

Between clearing out a house that has a remarkable number of closets and cupboards, having to stop from time to time to look at a photo or puzzle over a possession, I went to Mom’s lawyer and trusted him immediately. Mechanics of probate in his capable hands, I set out to change the status of a life I didn’t really expect to be over so soon. And everywhere I went, I was greeted with gentleness, helpfulness, and sincere expressions of condolence. The city clerk who handled the records helped get Mom’s accounts set over to my name. The post office was sincerely sad they couldn’t issue a change of address until I got the probate letters, but they did let the mail deliverer know to hold the deliveries when I gave the word.

(I met her my last day in Sandpoint. She told me how nice my Mom was, and how she’d see her walking her pups up and down the street. The pups preceded Mom in death.)

My brother’s daughter joined us for the funeral. It was nicely done, with several of Mom’s paintings on easels in among the flowers. The minister was very sweet, and kind. But it was awful. I fled as soon as I could. I pleaded the need to lay out the sandwiches, veggies, and fruit for the lunch at the house following the ceremony.

It was nice seeing Mom’s family who I hadn’t seen in years, but it was a strain for an introvert who just wanted to finish closing the house up so I could go home. Mom’s sister made it, though I know she hasn’t been well. She matter-of-factly told me this would be a final parting as I hugged her good-bye.

Brother, niece, and I went out for dinner night before they left. Sandpoint has excellent food, definitely gourmet quality. And the proportions are lumberjack sized, as befitting an town that attracts skiers in the winter, and hikers and adventurers, year round. Beautiful town, wonderful people, extraordinary food. It’s easy to understand why Mom retired to the town.

A week of non-stop work and we—Colleen, Sam, and I—had the house cleared. I hired a cleaning crew to make it sparkle, met with the realtors, gave them the keys, and took one last look around.