A fellow Missourian, Taunia Adams, emailed Senator Munzlinger, the state Senator for the Rabbit Ridge kennel district, about the kennel. Following in his response to her:

You are right in assuming that I do not advocate for animal cruelty. I read this blog post and did some investigating. I spoke with the Director’s office at the Department of Agriculture (MDA) and they performed an on-site investigation on May 12 at the Rabbit Ridge Kennel. According to the MDA, there was one very minor violation. Other than that, everything was in order. The blog post cites previous USDA inspections. I’m sure you’re aware that the Federal government is out of my jurisdiction and I’m not an expert on their inspection standards or punitive policies.

I’ve heard from several Missouri residents in response to this blog post, including the veterinarian on record for Rabbit Ridge. He corroborated the results of the MDA’s investigation. I find it disconcerting that some people are willing to ruin the reputation of a licensed breeder in good standing based on personal agendas and rumors.

Also, I must disagree with you regarding my support of Senate Bill 161. Proposition B, as passed by the voters, did nothing to address the problem of unlicensed breeders in our state and provided no funding to allow the MDA to step up inspections and enforcement. The compromise language allows good, law-abiding breeders to remain in business, while giving the Department the tools they need to increase enforcement. 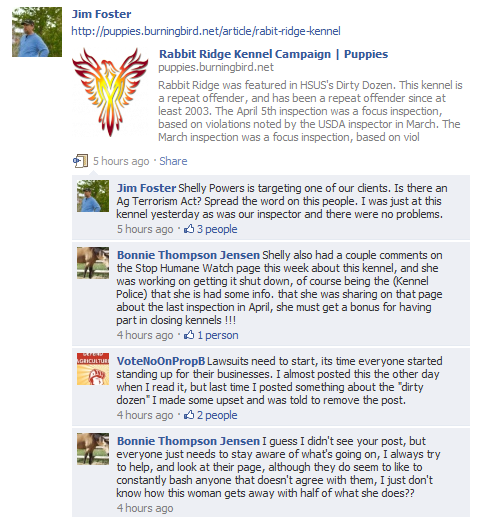 We have no idea what the “minor violation” is, since the good Senator didn’t identify it. I’m assuming it could be a repeat of the last MDA violation: a build up of dirt, grime, and cobwebs in the kennel buildings.

We have a breeder who has racked up hundreds, maybe even thousands, of serious violations over the years, suddenly having no violations. And we have an MDA inspection report that differs from the last two USDA inspections. So where is the truth in all of this?

Thanks to the amendment stuck into the bill on blasting in last year’s legislature, no one from any animal welfare organization can accompany an MDA inspector to verify the accuracy of the department’s reporting. No, not even a representative from MAAL or the Humane Society of Missouri (HSMO), both of whom worked with Governor Nixon and the MDA to toss out Proposition B in favor of the “compromise” SB 161. And frankly, after three failed audits, and the department’s actions regarding the Proposition B vote, I don’t have a lot of faith in the MDA.

My next action is to contact the USDA for any and all photos that it’s inspectors have taken of Rabbit Ridge. Because of the failures in the March and April inspections, the USDA should also be inspecting the breeder in the next couple of months, so will see how that inspection goes.

Well, unless I’m taken away by the FBI for being a terrorist because of my activity, that is. 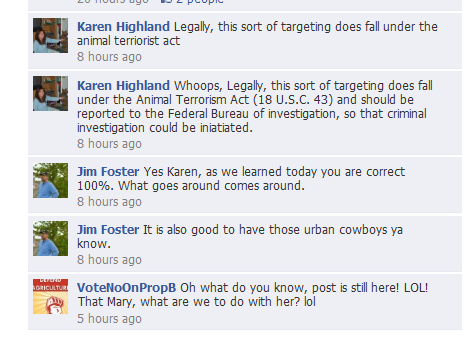