When the balance sheet for 1839 was struck it showed, to the great surprise of Mr. Shaw, a net gain for the year of $25,000. He could not believe his own figures, and so went over them again and again until he could no longer doubt the fact. Telling the story many years afterward he said it seemed to him then that “this was more money than any man in my circumstances ought to make in a single year,” and he resolved then and there to go out of active business at the first good opportunity. The opportunity presented itself very early in the following year, and was promptly improved by the sale of his entire stock of merchandise. So at forty years of age – only the noon of life – with all his physical and mental powers unimpaired and vigorous, Henry Shaw was a free man – and the possessor of $250,000 with which to enjoy that freedom….

There is every reason to believe that, with his exceptional qualifications for success in this department, he might easily have increased the $250,000 to $2,500,000 long before he had reached the age of sixty. He retired, not because he was afraid of losing what he had made, or thought he could not make any more; but because he felt he had enough, and intended to enjoy it. He always owned his money; his money never owned him.

Yesterday was cold and clear with a nice dusting of sparkly white snow on the ground; perfect conditions for visiting the Botanical Gardens.

During the winter, especially when it’s cold, the Gardens rarely has visitors during the work week. However, being a public facility, it also has to keep its paths clear and dry, which makes it a wonderful place to walk after a snow. I find the Gardens a good place to walk when I want to have a quiet time to think about things, because unlike many of the Ozark trails, I don’t have to keep my mind on the paths.

I passed two couples and a single walker yesterday but other than that had the place to myself. Even the koi had retreated to warmer climes, rather than follow me as I traversed the zig-zagged board walk. The previous days snow had built up on the bushes, and then slightly melted due to the warmer conditions. However, there was a sudden temperature drop, which then froze the snow on the plants, leaving everything coated with just enough snow to look like it was dropped on by a mad cake maker with the mother of all bowls of icing.

I always head to the Japanese Gardens when I enter the park, no matter the season. Some of the water fountains were frozen and shut down, but the water in the lake and streams circulates enough to keep them liquid. What was rather interesting to look at was the snow that had been blown around the raked gravel in the gardens, looking more like lint caught on bit of rough than what it was.

Each time I visit the Gardens, I always try and walk down a new path or explore a new corner. Yesterday I visited the Henry Shaw Mausoleum: a red brick and stained glass octagonel building surrounded by plants, and containing Shaw’s tomb and a beautiful white marble effigy. It was a bit hard to see in through the iron gated windows but I managed, and even got a fairly decent photo showing both the effigy and some of the stained glass. 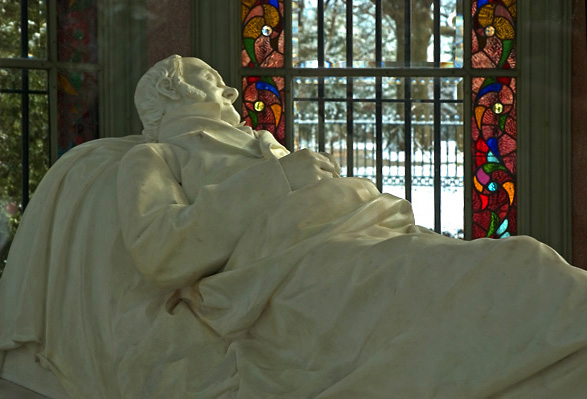 After seeing the effigy, I got curious about Henry Shaw, the man behind the Gardens, and when I got home looked him up. I found an annotated history of the Gardens, including several excellent photos from the 1860’s until the 1920’s. It was in this that I found the earlier quote about Shaw, made by a friend of his, as well the following photo, which was taken of him as he posed for his effigy. 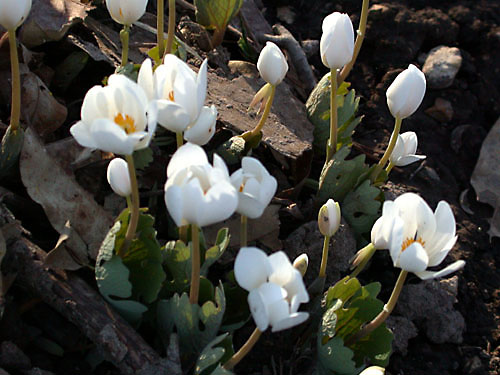 The photos in the history were digitalized through a program funded by the State of Missouri library system, which leads the country when it comes to actively seeking out and putting digitalized multimedia material on the web for public access. Being the magpie that I am, I immediately became distracted by this new virtual piece of fluff and searched around to see what else was online through this program.

I struck gold when I found the site, Voices of World War II: Experiences at the Front and at Home containing photos, radio transcripts, music, and even video of the bombing of Pearl Harbor. This multimedia immersion into history is the richest I’ve been able to find on World War II, and listening to many of the radio broadcasts last night, I was surprised again and again, how the experiences of the events of the time differ from our historical perspective of same. for instance, a radio broadcast by H.V. Kaltenborg one week after Pearl Harbor showed that interest was stronger in fighting Germany, who had not fired one shot against the US, than in Japan. “If we can defeat Hitler,” Kaltenborg claimed, “we can defeat Japan almost in our leisure”–a piece of arrogance we were to pay for time and again in the war.

The site contains complete songs from the era, and even photos of the records themselves. Remember Abbott and Costello’s baseball routine? You’ll be able to hear wartime quasi-classics such as the Murphy Sisters, “You’re a Sap Mr. Jap” and the odd, surreal, When the Atom Bomb Fell by Karl and Harty in addition to more popularly known Glenn Miller music.

Among all the interviews with combatants, and recordings of actual fighting, it is still the broadcasts from the radio men of the time that had the most appeal to me, including some from one of my favorite journalists, Edward R. Murrow. This is radio, at its best and brightest.

To return to my original explorations of Botanical Gardens and Henry Shaw, it’s not just the history of the place that has forever found a home on the web–the Gardens’ famous collection of rare herbal books that Shaw purchased from another collection has also been digitalized. If you’re interested in botany or gardening or herbs; love looking through exquisitely detailed pen and ink or watercolor images of plants, as well as the finest copperplate; or have an interest in bookbinding, click here, and then be prepared to lose hours of time. I love to photograph plants and trees out on my walks, but will be the first to admit that the effort falls short in comparison. Not that I’ll stop.

After pulling myself way from the distractions of multimedia, I continued to reading Shaw’s bio. Most writings of Shaw are positive, and by all accounts, he was a kind and generous person. He never married, and once was even sued for breach of promise, but the case ended up being dismissed. Good thing, too, as it would have taken enough money to disrupt his dream of creating one of the finest gardens in the country.

Still there is a shadow among the bright flowers in Shaw’s history. Being English by birth, when he first moved to St. Louis he was against slavery; years later, however, he was the owner of eleven slaves, most likely purchased to work on the Gardens. Three of his slaves, a mother and two children, tried to run away, helped by a free black woman, Mary Metchum; they were caught on the Illinois side of the river, and Methum was subsequently tried, but nothing further is known about what happened to her. As for the slaves, he sold the mother, but there’s no record about what happened with the children.

Historians like to point out that years later, after the civil war, he was one of the few employers in the area who would employ the people referred to as ‘Bohemians’: newly freed black people who had a difficult time finding work in this former slave state. One such black ended up becoming his personal assistant until his death, though I’m not sure if it’s the black man depicted in the following photograph. 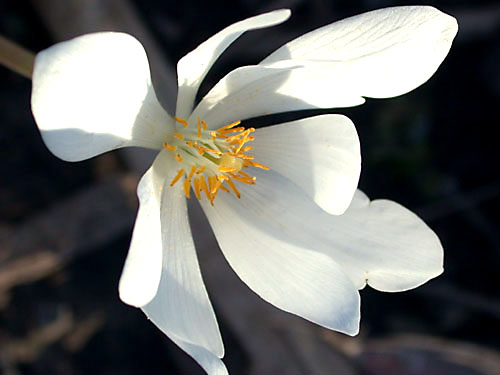 Anyone who has walked the Gardens can’t deny the benefit of Shaw’s vision for a grand garden — it is a wonderous place; one of the finest of its kind in the world, and an important component of in the education system in this state. However, his image as a ‘great humanitarian’ must be forever tarnished by the ills of owning another human being.

The reality of human failing aside, I still find Shaw’s marble effigy to be beautiful amid the stained glass and red brick, trees, and flowers. Especially the flowers. After all, flowers are blind to the color of man.