I tried to capture an image of Mars last night, but the fates weren’t with me and the globe seemed elusive. I could see it in the telescope but it was a dull yellow pink in color, not the vibrant rust-orange we’ve come to expect from Mars.

We’ve had no rain and St. Louis is one of the ten worst cities for air pollution though thanks to the cooler temperatures we haven’t had the problems we had last year. With the morning rain, I hoped the air would be clearer, and set the telescope up on the back deck.

I spotted Mars peeking out from behind the big tree on the corner and was turning the telescope around when bright flashes of light caught the corner of my eye. As fast as Mars was heading to the West, a storm was heading to the East. A beautiful and usual storm, too, and I was momentarily tempted to take photos of it, until I came to my senses and recalled exactly which event is the less frequent.

I have a good camera, a Nikon 995, but not a beauty like a D100 or even, in my dreams, a D1X. I have a good telescope, a Meade ETX70, but not a powerhouse like the 14″ Schmidt-Cassegrain. Added to the mix, I don’t have an attachment that will allow me to take photos through the special port on the telescope and I have to use the eye piece. This is my way of saying that my photos of Mars are properly orange, helped a bit by the haze and the 800 ISO camera setting, and I guess we’ll need to be content with that. 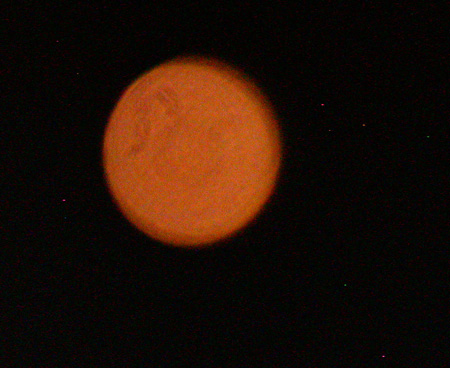 This photo was dead centered in the telescope. Notice that no real detail of the planet shows, including, unfortunately, the polar ice cap. No matter how I tweaked the telescope, and which lens I used, the ice cap wouldn’t come through.

I have found with the moon at least that sometimes taking a more oblique photo of the object can bring out details. I tried that with the next shot, and if nothing else, there’s more of a suggestion of roundness to the photo. 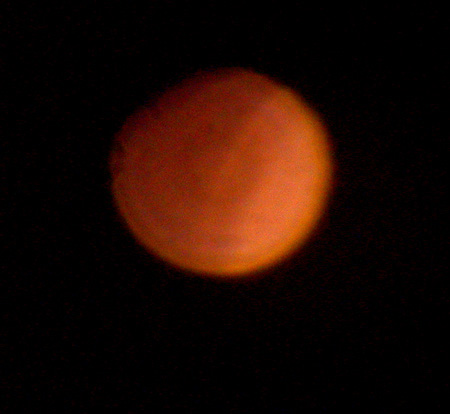 Finally, after 2 hours of taking photos and a storm quickly moving in, I managed to get the following. Now, whether the streak was something to do with my telescope, or a reflection of the major canyon system on the Red planet, I don’t know…and I don’t care. If I call it a Martian detail, it is, henceforth, a Martian detail.

Of course, Hubble photos blow away my own little attempts, but that’s not the point. The point is standing on your deck and taking a picture of another planet. All the wonderous photos from Hubble and all the major telescopes and all the detail combined won’t dim my satisfaction in these, my little orange balls of fuzz.

This photo I’ll leave for you all as I drag myself to bed after two nights up late, chasing a globe of war. 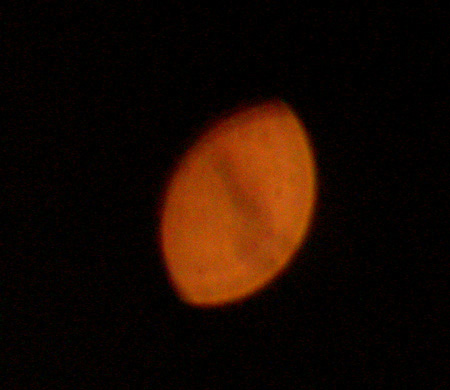