Loren, who has been sharing tales of courage and horror from his fearsome youth, recounted one incident with a slippery log and a fall into a swift stream. Ever since, he’s hiked out of his way to avoid having to use logs to cross streams.

(He and I also shared a five year old fascination with matches, oddly enough. I wonder if the cause and effect associated with ‘matches’ and ‘uncontrolled fire’ is an epiphany all five year olds undergo?)

I share his wariness of log crossing, but mine is based less on specific event than ongoing experience. Not only do I avoid logs, I also avoid ledges, unsteady hillsides, icy paths, and any form of roller or ice skating. I am a klutz, you see. A rather good one, at that. In a parking lot, I can manage to slip on the one and only wet pinecone; I can climb down rocky paths, only to slip on a bit of gravel at the end. I trip over unseen roots, and knocked myself out trying to chase a ball during softball when I fell into a tree. I even fainted at a wedding once, when we were required to stand for part of the service and I locked my knees, and caused myself to pass out.

When I am in prime physical condition (yeah, that will be the day again), I can move like a panther, all supple strength. But then, something always seems to get in the way.

For instance, Sunday I drove down to Bollinger Mill to film it and the Burfordville covered bridge. It was a perfect day, in the 30’s, excellent weather and the mill and bridge are extremely well maintained. Crossing the covered bridge to the other side, I started down the hill towards the White River in order to get a better shot at the mill and the spillway. I didn’t pay attention to the signs of recent flooding, until I started slipping on the wet mud that covered the hill. Not wanting to slide down on my butt into an icy cold river, I dug my stick into the ground and held on for dear life, twisting and turning to maintain my balance. 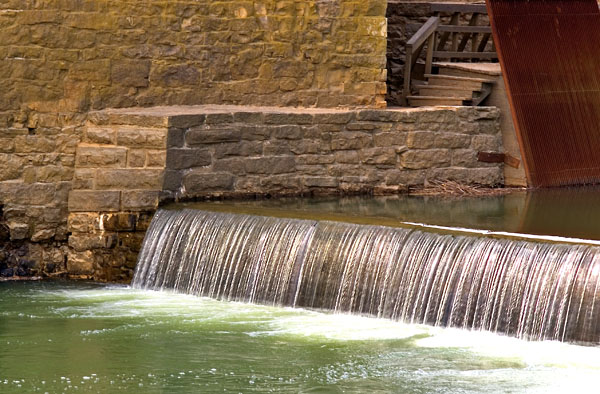 Eventually I managed to stable myself until I could find firmer footing on a bit of rock and from there, pull myself back up the hill, dignity and camera intact. That is until an older man who had been across the way walked over to me and asked me if I was alright. I thanked him and said it was just a slight slip, and nothing much to worry about.

“Well, we were worried that you were going to fall in. Glad you didn’t.”

Then out popped a huge smile.

“I shouldn’t say this, but you sure were funny.”

So much for the panther.