Skip to the content
I just finished reading another poorly done conservative piece in the Savannah Morning News; this one full of hearsay and innuendo. It was published at the same time as another piece that formed the point of this particular point/counter-point.
Both writings are supposedly about Biden’s immigration plan, but only the positive one really discusses it. The conservative opinion, written by Ryan Smith, a communications professional, seemed to be more focused on ICE, as defined under Trump, rather than Biden’s plan. He writes:

‘Many of these changes are cosmetic. But according to Jessica Vaughan, Director of Policy Studies at the Center for Immigration Studies, a fundamental change in immigration is underway, a change that members of America’s border security agencies say could bring even more changes to our immigration system.
“I’ve heard from multiple sources that dismantling ICE and ending its enforcement role was discussed by [Department of Homeland Security Secretary] Alejandro Mayorkas at a town hall meeting for ICE staff in San Antonio,” Vaughan told InsideSources. “The apparent purpose of this reorganization is to abolish immigration enforcement by starving the agency of resources, personnel, and authority, and at the same time stifle internal resistance by busting the deportation officers union.”’
Hearsay and innuendo.
Hearsay from multiple sources about dismantling ICE and ending its enforcement role. There could actually be truth to half of this: there has been significant discussion about dismantling ICE. ICE was a knee jerk reaction to 9/11 that was hastily contrived, and has been poorly managed ever since. Even many ICE agents have recommended it be dismantled.
But then we get the innuendo: the sole purpose for dismantling ICE is to abolish immigration enforcement, something that no one with any intelligence should find credible. Even less credible is a asserted secondary purpose: to bust the deportation officers union. We assume the writer picked this up from an article published by the Center for Immigration Studies, about a nefarious plot to abolish deportation officers.
(How does one abolish deportation officers? Does one wave a magic wand and with a “bippoty boppity boop” they vanish in a sparkly cloud?)
ICE was originally intended to be a small organization whose sole purpose was to prevent acts of terrorism by targeting the people, money, and materials that support terrorist and criminal activities. It then morphed into this large blob of an agency that is re-defined by whoever is President to do whatever the President deems it should do.
Under Trump, it became such a symbol of hate and fear that the officers within ICE who are actually tasked with enforcing ICE’s original duties cannot do so because police agencies would no longer work with them.
As we have painfully discovered over the last several years, no agency with sweeping police powers should operate with such ill-defined boundaries. The potential for abuse is enormous.
I can truly believe that there was a meeting in the DHS about dismantling ICE. There have been meetings in the DHS before Trump was President about doing the same. And there have been calls from groups outside the government, both conservative and liberal, to eliminate the agency and return both people and duties to the agencies originally tasked to manage both.
But this opinion was supposed to be about Biden’s immigration plan, wasn’t it?
As if reminded of the fact, Smith casually tosses in a couple of indifferent paragraphs about the plan, but only after he’s sufficiently stirred up enough fear, uncertainty, and doubt (FUD) to ensure a negative reaction to anything anyone might read about it. He also manages to work Alexandria Ocasio-Cortez’s into the piece, because you can’t have a conservative writing without mentioning her least once. 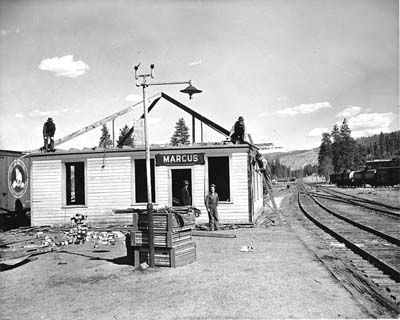 Caption: An old land mark (sic) that was razed in Marcus recently was the Immigration Station which was used by the railroad as a railway station since the removal of the regular station to the town of Kettle Falls three months ago. Marcus oldtimers remember boom days for the railroad thirty years ago when the Immigration Service had three and four interpreters, a doctor, and several inspectors to handle the large number of Hindus, Chinese and European immigrants coming into this country from Canada on this line.

My father’s family made its way into the United States from Ireland via Canada around the turn of the century. Though my grandfather and grandmother entered the country by boat through Massachusetts, many immigrants found there way into this country through small back woods immigration stations, such as the one shown in this photograph, the old Marcus Railway station.

In the photograph, the station is being dismantled, another casualty to the progress that was known as the Grand Coulee Dam.

So much of this area, its history and culture, was lost when Coulee Dam was buillt in the late 30’s, early 40’s. In its place was left the Roosevelt Lake, home to a modern, surreal Atlantis consisting of the communities that were drowned when the dam was made operational.

Just below my maternal grandparent’s home was a road that used to cross the valley, but now led underwater. We used to bring our cars down to the spot where the road just started to disappear under the clear waters. There, my father would wash the cars, while I and my brother walked the shallows, looking for Minnows.